15 Reasons why I love Portugal 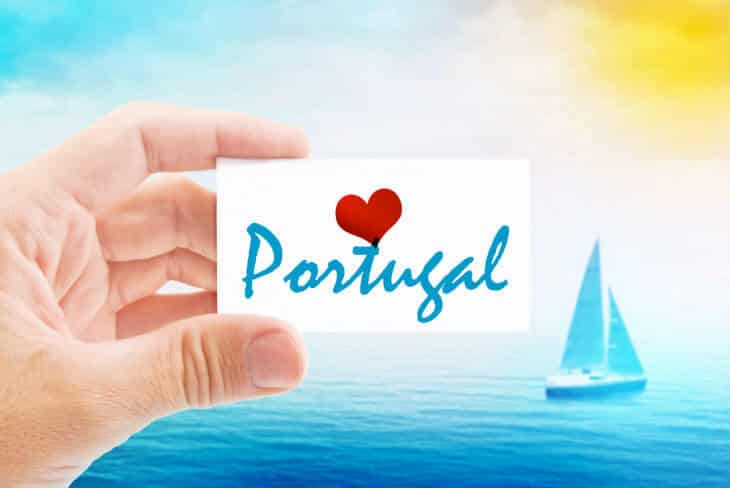 Portugal is located west of Spain on the Iberian peninsula. The climate is pleasant all year round, and it rarely gets freezing. I love Portugal and it’s one of my favorite destinations in Europe.

Prices are about the same as in Spain, slightly cheaper. The locals are friendly; the food is a delight for your soul, and there are lots of impressive architecture to admire.

My experience of the country is nothing but positive, and I can highly recommend you to visit. Here are 15 reasons why I love Portugal!

Sure you can drink port wine outside Portugal, but it is not quite the same as drinking it where it’s produced. To go wine tasting in Porto is both interesting and fun. Moreover, you get the chance to taste some port wines that you didn’t even know existed.

More reading: Things to do in Porto 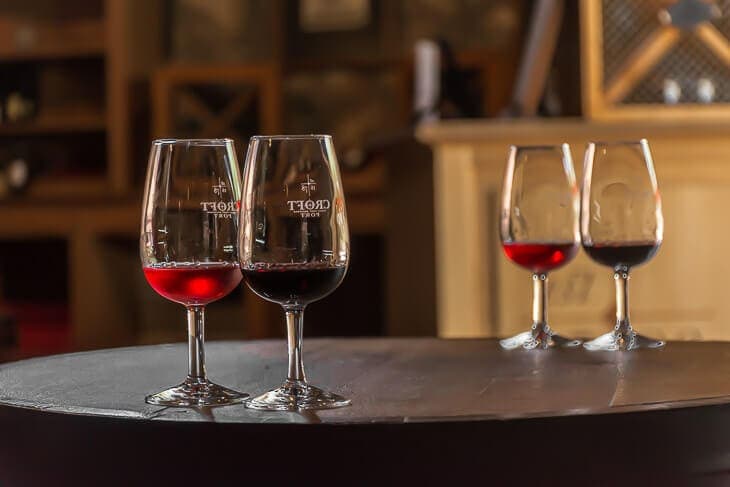 Madeira is the birthplace of one of the world’s most famous football player – Cristiano Ronaldo. But the island is perhaps best known for its greenery and scenery, which has given rise to its nickname as the Atlantic gem. 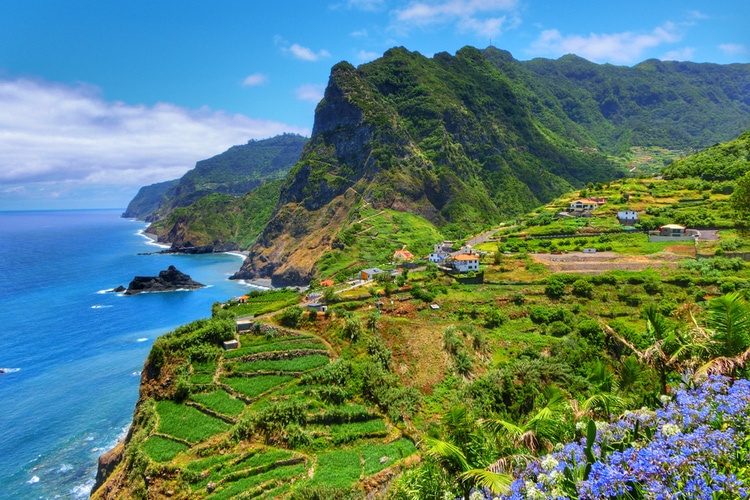 Pastéis de Belém is a famous bakery in Lisbon that make over 14 000 Pastel de Nata every day. It’s an iconic bakery where you can eat the “original” version of Pastel de Nata, one of the most traditional pastries from Portugal.

The colonial legacy can be seen throughout the country, and there are plenty of beautiful buildings to admire, both in the major cities like Porto and Lisbon, but also smaller cities. A city that you should not miss visiting is Sintra, which is on UNESCO’s World Heritage List.

Portugal is filled with majestic old cathedrals and beautiful churches. Even the old houses around the country are impressive. 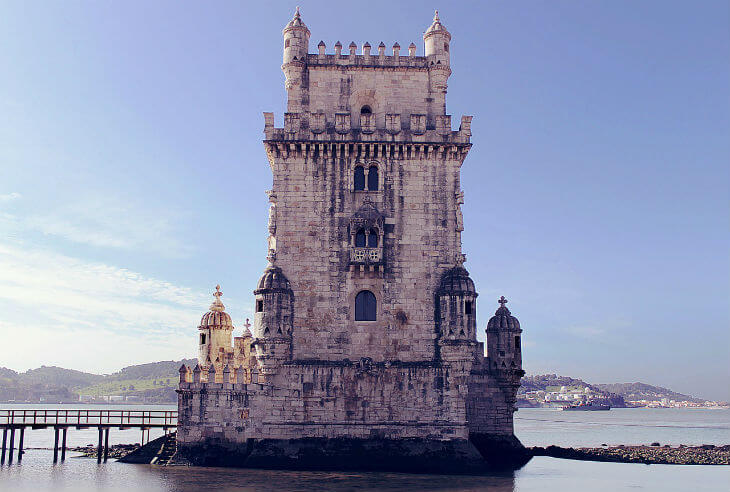 Heard of Francesinha? It is a typical dish from the city of Porto. One can explain it as a huge sandwich, but more savory. A real calorie bomb in other words, but heavenly delicious.

Francesinha may vary, but a typical Francesinha is made of bread, ham, sausage or any other type of meat then drowned in cheese and a hot sauce made from beer and tomato. As a side dish, you get French fries. 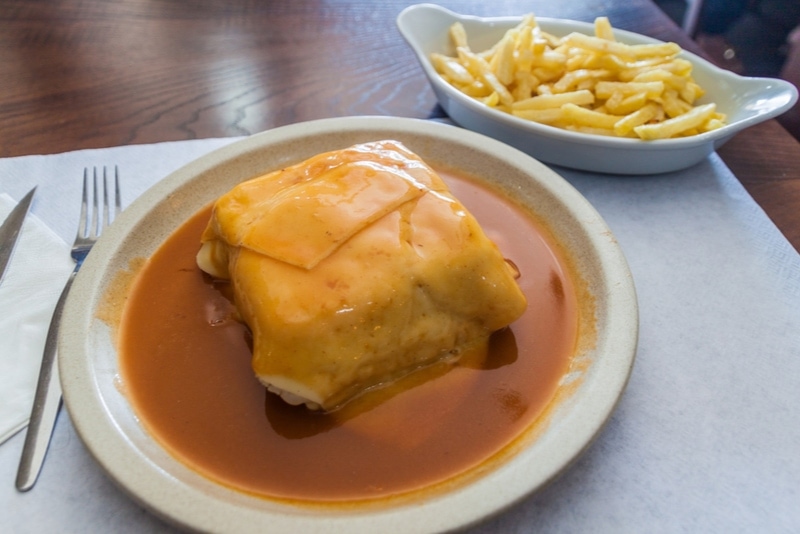 Since the 15th century, the Portuguese has pride themselves on making some of the best tiles in the world. The tiles from Portugals are known for their beautiful patterns and excellent quality. You can find them as decorations on house walls and buildings across the country.

Azeitão is perhaps the most famous region for tile-making, and they are known for creating mesmerizing patterns. If you wonder what to buy from Portugal as a souvenir, Portuguese tiles from Azeitão is a great idea.

Do you like sunbathing mixed with beautiful scenery and wonderful beaches? Then, the coast of Algarve is a destination for you. Algarve is one of the most popular tourist destinations in Portugal and here awaits endless golden beaches and dramatic cliff formations. 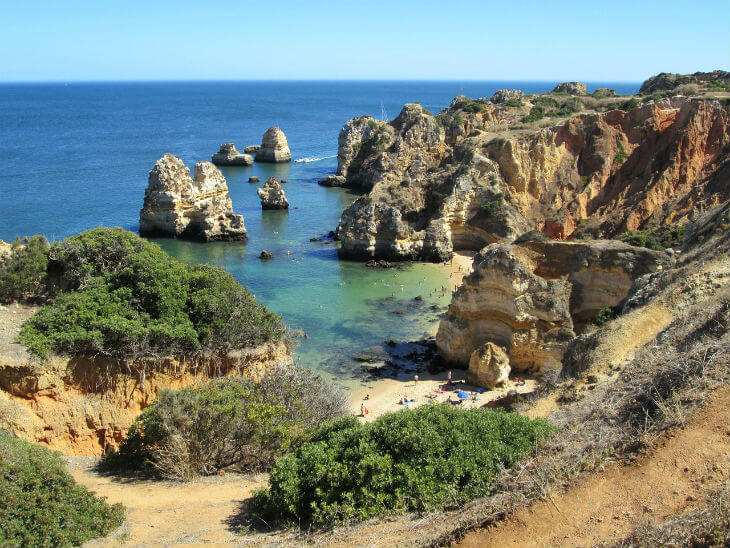 Portugal is one of Europe’s most inexpensive countries where you get much value for your money. The general standard of living is great, and most things you could think of is available.

Eating out at a restaurant is cheap, and something that both locals and tourists often do without breaking the bank.

Fado is a music genre from Portugal with origins in Lisbon and the 1820s. However, it’s believed that the Fado music has existed longer than that, even though this was the first time it was mentioned in a text.

Fado is characterized by a feeling of longing and mourning. It must follow a specific structure, and since 2011 the music genre is also listed as an intangible cultural heritage by Unesco. It’s hard to not fall in love with Portugal after listening to a traditional Fado performance. 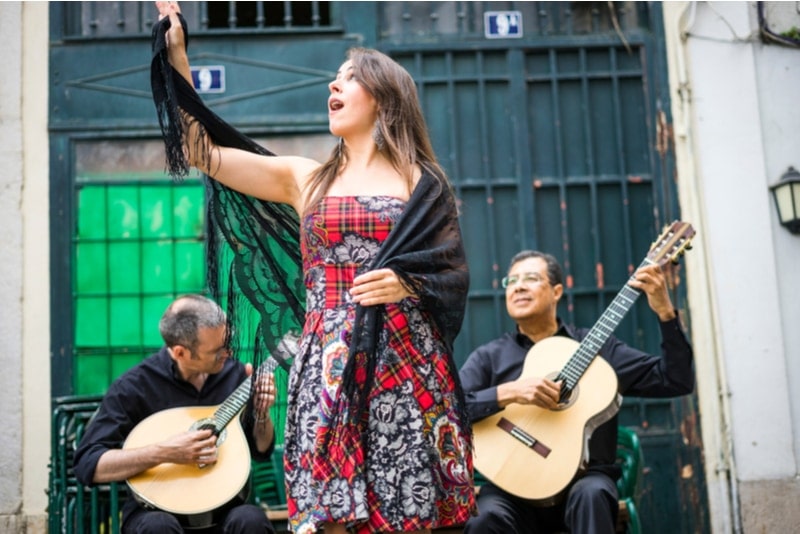 The Portuguese people I’ve met, have all been happy, friendly, helpful with a lovely easy-going attitude towards life. They do not seem too stressed, and they feel harmonious.

Something I’ve also noticed is their passion (I was in Porto and saw when they played in the European Championships 2016). The entire city were gathered in front of the big screens in the city center, and it was an unforgettable moment every time they scored a goal.

Few places in the world are as beautiful as the Azores, an island group that belongs to Portugal. In total, there are nine islands which are located some 1500 kilometers outside Lisbon.

São Miguel is the largest of the islands in the Azores, and it features grand views and spectacular scenery. The Azores is also known for its many hiking trails, and it’s a popular honeymoon destination. Portuguese is a beautiful language that is also the main language of Brazil. In total, there are eigth other countries where Portugal is the official language. For some, Portuguese might sound like a mixture of Italian, Russian, and Spanish.

It’s an Indo-Europan language with origins from Old Portuguese, which in turn derived from Latin. Everytime I hear someone speaking Portuguese, I get a happy feeling inside my body, and it feels like they are singing. 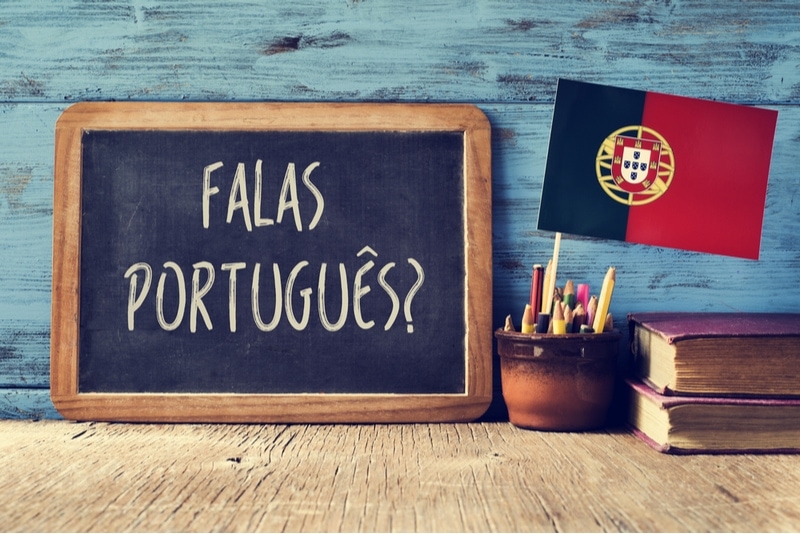 Sintra is a popular day trip from Lisbon with Palacio da Pena as one of the main highlights. The palace was built in the 19th century and features a unique mix of architecture styles.

It was Ferdinand II who inititated the constructioni of the Pena Palace, which later earned the status as a World Heritage Site by UNESCO, along with the historic area of Sintra. 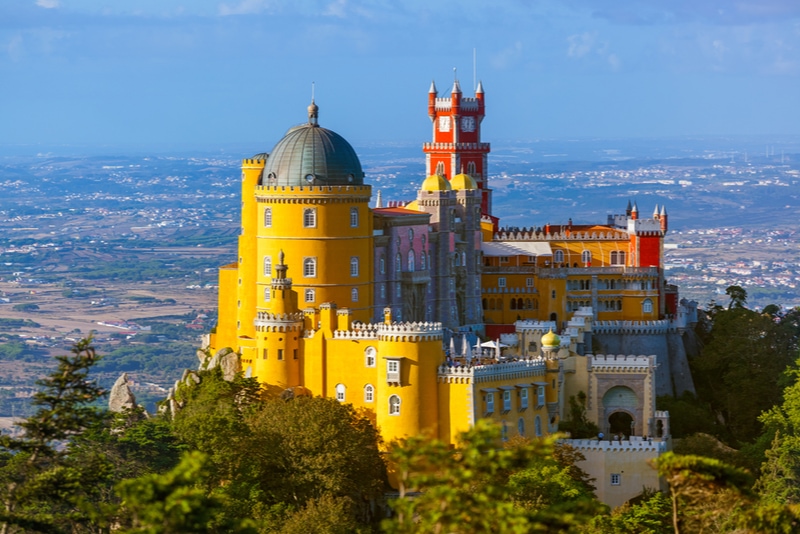 Portugal’s geographic position on the Iberian peninsula results in nice weather year round with plenty of sunshine, including the winter months. Along the coast, one can enjoy the cooling breeze during the summer months.

The lovely climate is one of the main reasons why so many foreigners love Portugal. The temperatures and amount of sunshine is similar to neighbouring Spain, and there are several places with more than 3000 sunshine hours per year.

There is no shortage of beautiful beaches in Portugal, and they are scattered along the coast from north to south. Several of the most famous beaches are located on the Algarve coast, but there are nice beaches near Lisbon and Porto as well.

Moreover, the islands of Madeira and Azores also have a fair share of paradise beaches. Portugal has a wide range of beaches, or praias as they’re known in Portuguese. Visitors can choose from crowded and lively beaches or calm and secluded beaches.

There are lots of beautiful places to visit in Portugal, both on the mainland and on the Portuguese islands. Many of these places can be reached by various hiking trails that connects towns and regions across the country.

Some of the most famous hikes in Portugal include Passadiços do Paiva, Costa da Caparica trail, Trilho dos Currais, Praia do Telheiro, and the Seven Hanging Valleys trail. 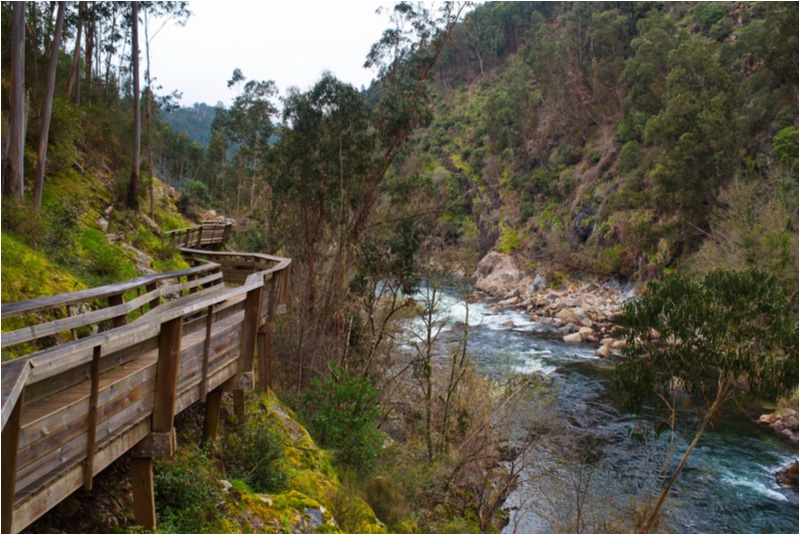 Last but not least, Galão, which is Portuguese coffee drink that is made of 1/4 espresso and 3/4 skimmed or foamed milk. It’s a rich and creamy beverage that is usually served in a tall glass.

For those who prefer a more dominant coffee flavor, there is a stronger version known as escuro. Galão is perfect for breakfast or mid-day break at a café along with a pastry, such as Pastel de Nata. 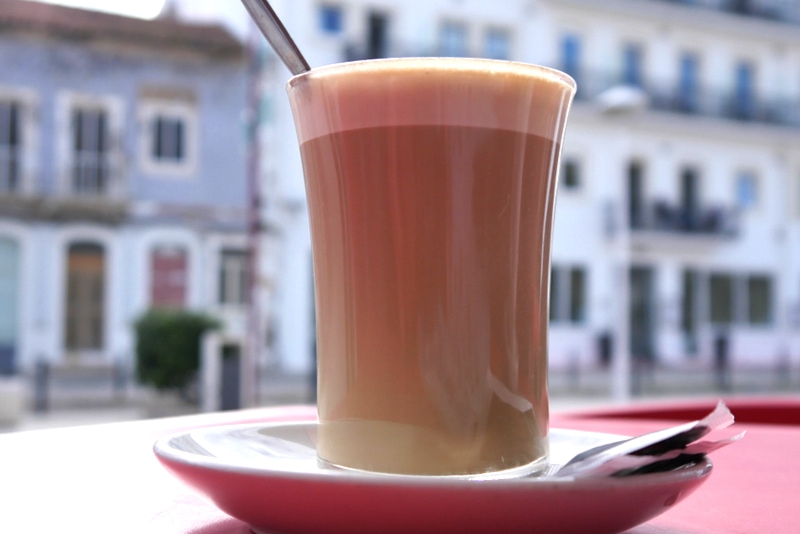 Do you also love Portugal? Leave a comment below!

Top Things To Do In Hong Kong as a tourist
Read Next Post →
Click here to cancel reply.