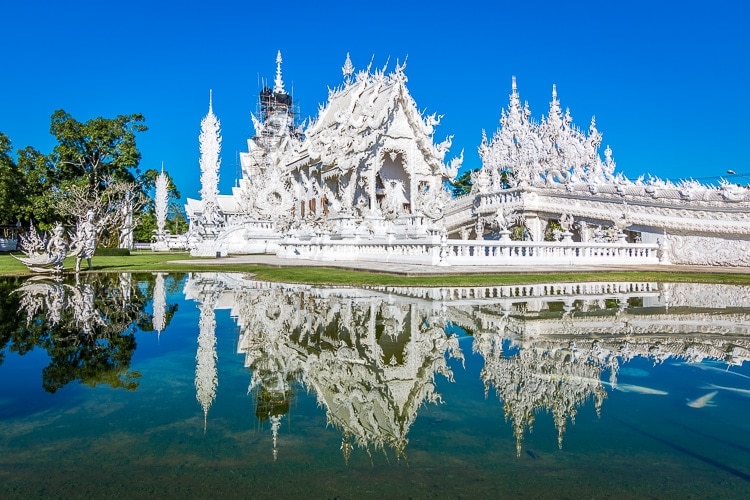 Wat Rong Khun (Thai: วัดร่องขุ่น), also known as the White Temple is a Buddhist temple in the Chiang Rai Province in Northern Thailand.

I have visited this beautiful temple, and here you can read all about how to get there, more information and see photos.

How to get to Wat Rong Khun

The transfer time from Chiang Mai to the White Temple is approximately 3 hours. The ride from Chiang Rai is just about 20 minutes, and shouldn’t cost more than 300 baht with a tuk-tuk. You can also go by public transport.

Buses depart to Wat Rong Khun from Chiang Rai in the center, near the night bazaar. The bus ticket is just 20 baht. 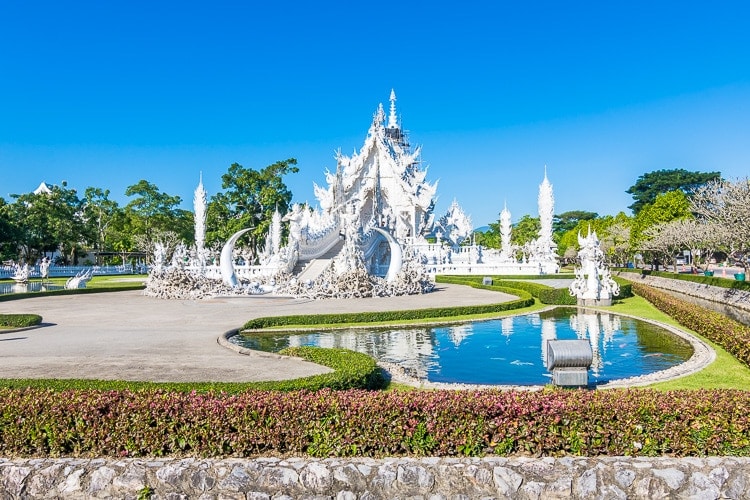 There are several ways to go here from Chiang Rai. The easiest way is probably by taxi or tuk-tuk, but a cheaper and more adventurous way is to go with the local songthaew.

Just ask for a songthaew to Wat Rong Khun, and let the driver know where you’re going. You pay when you arrive, and the driver will notify you when you’re at the temple. We were dropped off at the road outside the White Temple. 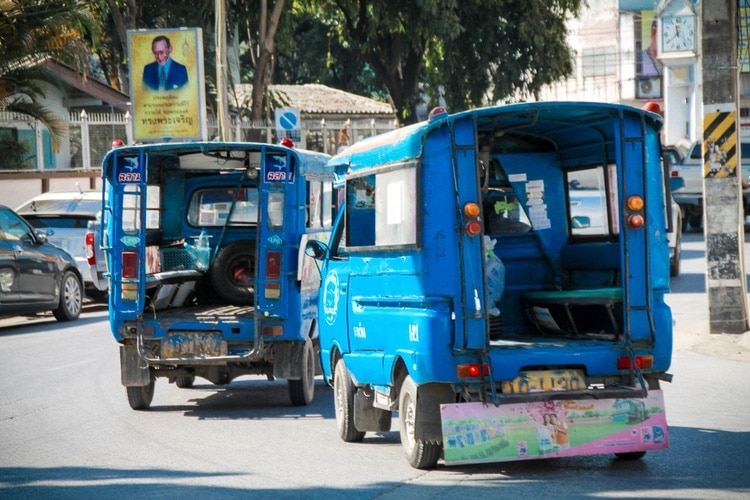 A white ornate Buddhist temple that is quite different compared to other Thai Buddhist temples. It’s easy to understand where the name comes from as the temple is almost all white.

Wat Rong Khun is one of the most popular tourist attractions in Chiang Rai and Northern Thailand. Chalermchai Kositpipat, the owner of the temple is considering the temple as an offering to the Lord Buddha.

If you’ve seen other temples in Thailand, or in other Buddhist countries, you can see a big difference here. Most Thai temples are colored and heavily decorated, especially on the inside.

Here, the white temple symbolizes purity, and the glass is a symbol of Buddha’s wisdom and the Dhamma. It’s quite a unique temple dedicated to Buddhism.

Donations are accepted, but the maximum amount is 10.000 THB.

The bridge of “the cycle of rebirth” – This bridge leads to the main building, the Ubosot. In front of the bridge are hundreds of outreaching hands that symbolize unrestrained desire.

Gate of Heaven – Once you cross the bridge you will enter the “Gate of Heaven” where you can see two guards – Death and Rahu.

Ubosot – The main white building has several traditional features from Thai architecture, such as the Naga serpents and the three-tiered roof. The message of the images inside the temple can be somewhat confusing, but it’s meant to show that people are wicked.

The golden building – This is actually the restroom building, and this building is representing the body, whereas the main building represents the mind. The gold is a symbol of how people today rather focus on money and worldly desires.

The white color is the contrary since it symbolizes the idea to make merit and the mind, instead of material possession.

By the end of the 1900’s the old Wat Rong Khun was in a bad shape and need of restoration. Unfortunately, there were no funds available. Luckily, the local artist Chalermchai Kositpipat decided to renovate the temple and re-design it as well. 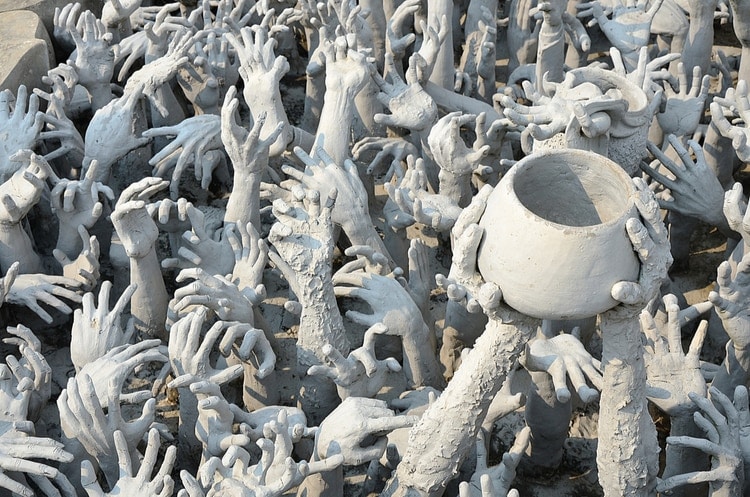 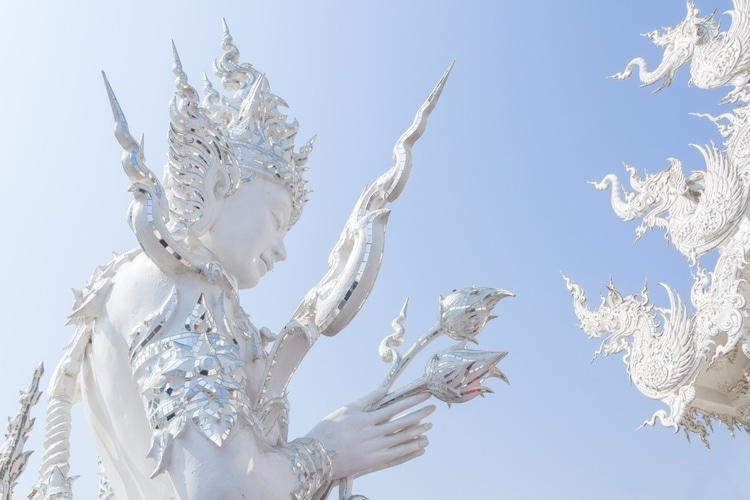 A local artist, and also now the owner of Wat Rong Khun. Chalermchai Kositpipat designed and reconstructed the previous temple who was in big need of restoration. He has funded the project himself and has so far spent more than 40 million Thai Baht.

Chalermchai Kositpipat is a visual artist from Thailand, famous for beautiful Buddhist imagery in his art. He started the Wat Rong Khun project in 1997. 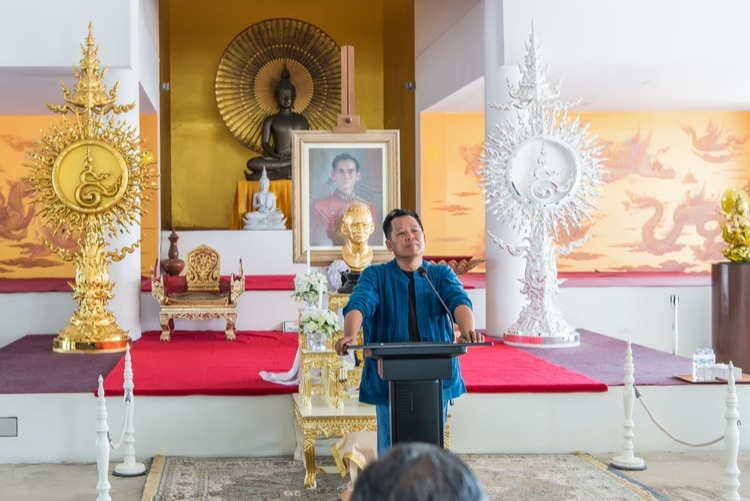 Normally, the inside of a Buddhist temple is very decorated with a Buddha statue inside. But this is not the case with the White Temple. It’s quite empty inside, except the famous murals on the walls.

Quite peculiar since the outside of the temple has such details. 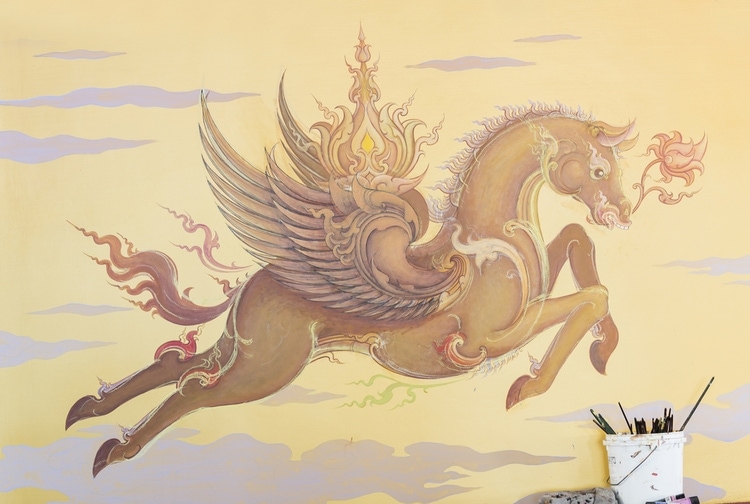 Things to know before you visit the White Temple

If you go to Wat Rong Khun during the weekend, you should expect crowds if you come after 8 AM. Both tourists and especially locals come here during weekends, which makes it quite busy.

It’s better to go there early on weekdays, to avoid the crowds.

The dress code at Wat Rong Khun is not as strict as the Grand Palace in Bangkok, but respectable clothing is expected just as with any other Buddhist temple. Cover shoulders and wear long shorts or long pants when you enter.

Shoes should also be taken off before you enter the White Temple. 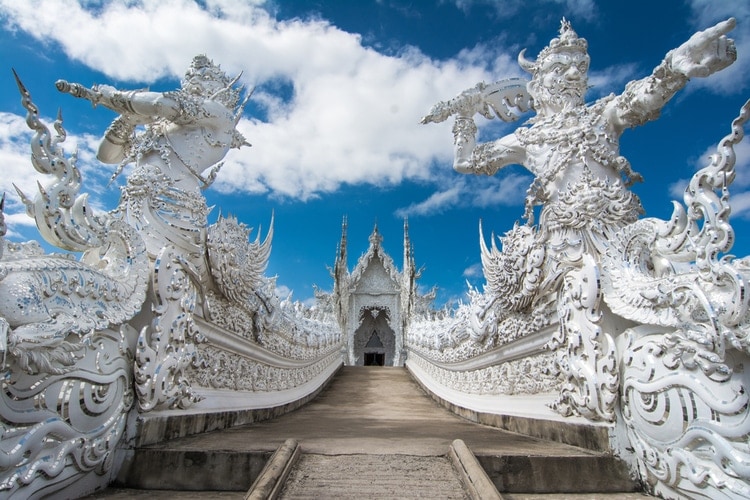 Do you have more questions about Wat Rong Khun in Northern Thailand? Leave a comment below or send me an email! 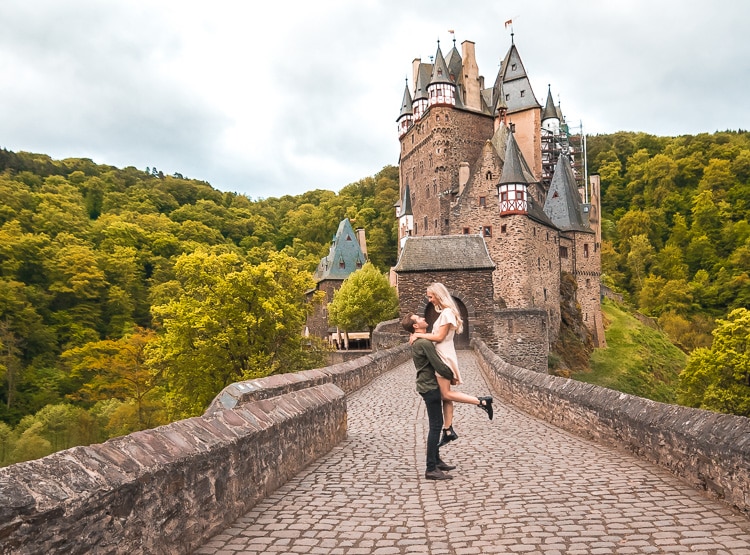 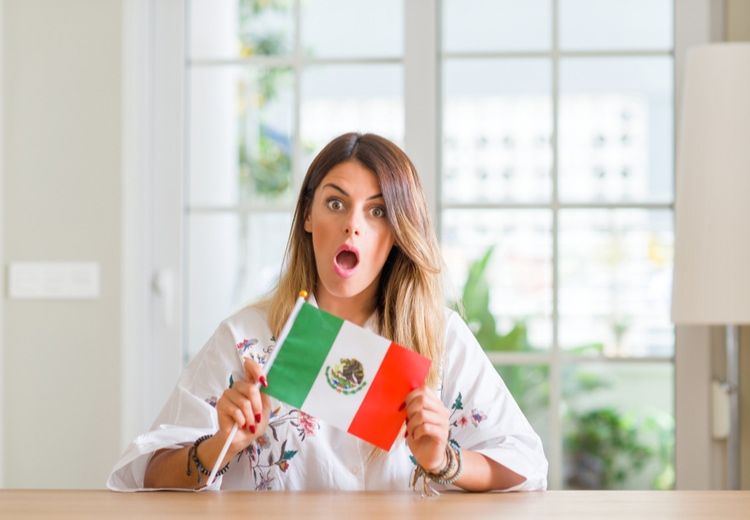