Want to know more about Japanese Food and Cuisine? Here is a list of 35 Traditional dishes that you should eat while traveling to Japan.

I’ve been to Japan quite a few times, and as you may know from my other articles, I really love it, and Japanese food is very tasty. I certainly don’t like all of it, but it’s very interesting because Japanese food culture is so different from what we have in Sweden.

Chicken on a skewer is a classic dish in Japan. Locally it is known as Yakitori and it is delicious. The skewers are being grilled over charcoal and are typically seasoned with tare sauce or salt.

Yakitori is one of my absolute favorites when it comes to Japanese food! If you travel to Tokyo, you should go to Omoide Yokocho in Shinjuku, which is famous for its small Yakitori stalls.

Yakiniku, on the other hand, is all kinds of grilled meats, but usually beef.

Rice and curry might not seem very Japanese as curry, in general, is mainly associated with India. But the Japanese curry isn’t like the Indian curry, and it was actually introduced by the British.

You can get the Japanese curry in various ways, with and without meats or just plain vegetarian or vegan curry. The most classic Rice and curry come with deep-fried pork cutlets though.

In almost every Japanese city, you will find these curry houses. It is usually quite cheap, and definitely one of the best Japanese foods to eat on a budget with big meals starting at 500-700 Yen.

This might be one of the weirdest traditional dishes in Japan. Takoyaki is a popular type of food in Osaka, and they serve it with pride.

It is served as balls filled with minced or diced octopus. And that is not so strange, but the topping is moving like “worms” when you eat it. Other than that, Takoyaki is one of the best street foods in Japan.

Deep-fried shrimp or vegetables are known as tempura.

There are several fast-food chains serving nothing else but various kinds of tempura with rice. It is one of the classic Japanese dishes, and you shouldn’t miss it.

The king of all Japanese food, the Sushi, famous worldwide. Sushi is basically fish served on top of prepared vinegared rice.

Some of the most famous types of sushi include salmon, tuna, yellowtail, and maki rolls, which are seaweed rolled around rice. Sushi used to be very expensive before it was commercialized via the Sushi conveyor belts.

One of my favorite sushi restaurants is Genki Sushi, which is a Japanese chain, known for offering good quality for lower prices. It’s a sushi conveyor belt restaurant, but you order from a computer screen, and then they prepare the sushi for you. 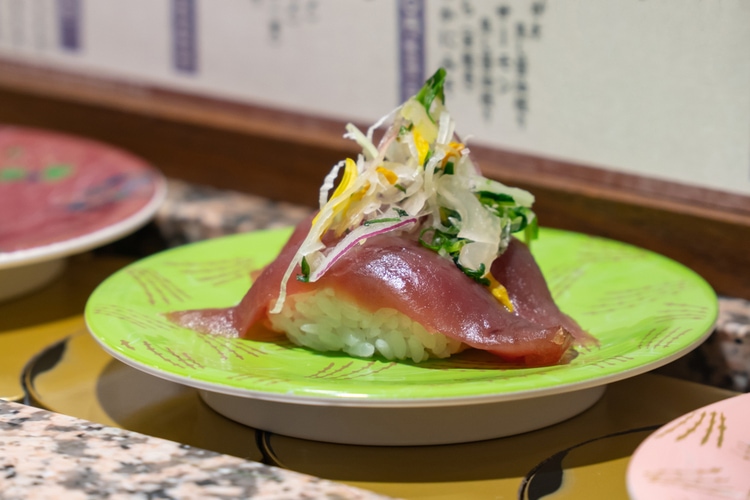 Sometimes, foreigners confuse sushi with sashimi. But they are very easy to distinguish. Sashimi is basically fresh raw fish that is sliced into thin pieces and served with soy sauce on the side.

Sashimi is a Japanese delicacy.

A popular on-the-go meal in Japan, Onigiri, which is basically rice wrapped in seaweed. You will find this in every convenience store, and it’s very cheap.

Onigiri has also become a popular choice of breakfast food in Japan. I don’t fancy it, but Christine ate it quite a lot since she doesn’t eat meat.

A special type of Japanese noodles. Udon noodles are thick and chewy, and they are normally made from wheat flour and brine water. I like them a lot and there are so many different recipes for Udon noodles that are being served in restaurants.

Kitsune Udon is one of the most common Japanese dishes with Udon noodles.

Another type of Japanese noodles that have now become famous worldwide. Ramen is a noodle soup with savory broth and is regarded as one of the most popular Japanese foods, and the locals love it.

There are ramen restaurants basically everywhere in Japan, and you can be served Ramen with various toppings, such as meat, eggs, and vegetables.

The third type of noodle which is popular in Japan is Soba, also known as buckwheat noodles. They can be served in soups with toppings or cold with a side dish.

However, most locals enjoy Soba hot, and that’s what I prefer as well.

The world’s most expensive beef, known as Kobe beef or Wagyu. Another Japanese specialty.

I’ve tried it several times, and while it is very expensive, it is the best meat I’ve ever eaten in all my life. It’s so mouthwatering that it’s ridiculous.

Breaded and deep-fried pork cutlet is a typical Japanese food. It was originally introduced by Europeans, but the Japanese made it their own. They even have tonkatsu sauce.

As already mentioned tonkatsu is one of the most common toppings for rice and curry.

If you want to eat like the locals, Donburi is a common lunch option for Japanese workers. The dish is made by frying or simmering various types of meat, fish, and vegetables, and then serve it over steamed rice in large bowls, which are called Donburi.

Gyudon, Oyakodon, and Katsudon are some of the most common types of Donburi.

Natto is a traditional breakfast food in Japan. However, these days it is mostly served in hotels as locals no longer have time to prepare the time-consuming dish.

Natto is basically fermented soybeans. It has a strong smell that reminds of moldy cheese, and not everyone is fond of it, but on the other hand, many Japanese people love it.

This is a classic Japanese dish to eat during the winter. It’s a stew with various ingredients of vegetables and protein sources. It is made hot pot style (nabemono).

A classic soup consisting of a dashi broth topped with tofu, green onion, and seaweed. Miso soup is usually served as a side dish for breakfast, lunch or dinner.

Japanese dumplings is another specialty that shouldn’t be missed. They are usually filled with pork mince, cabbage, mushrooms and green onion. Gyoza dumplings are normally fried on one side and then steamed for 2-3 minutes to make sure that the filling is cooked and juicy.

The Japanese pancake, which is especially famous from Osaka!

It is made by mixing sliced cabbage and batter as well as other ingredients and then fry it like a pancake. If you visit Osaka, you will see Okonomiyaki restaurants and stands in many places.

If you like to eat omelette, you’ll most likely enjoy the Tamagoyaki as well, which is basically the Japanese version. It can be eaten for breakfast, lunch or dinner and is made by rolling up several layers of beaten egg and cook it.

A popular dish made of freshwater eel that dates back to the Edo period. It was eaten during the summer, and this dish is made by brushing the eel fillets with a sweet kabayaki sauce which is based on soy sauce.

And then broil them on a grill.

Agedashi tofu is basically lightly deep-fried tofu that has been cut into cubes, which should also be dusted in some cornstarch or potato starch.

Then the tofu cubes will be deep-fried until they get that nice golden brown look. It’s an old and traditional Japanese dish that was even included in a cookbook from 1782. Very simple, yet delicious. 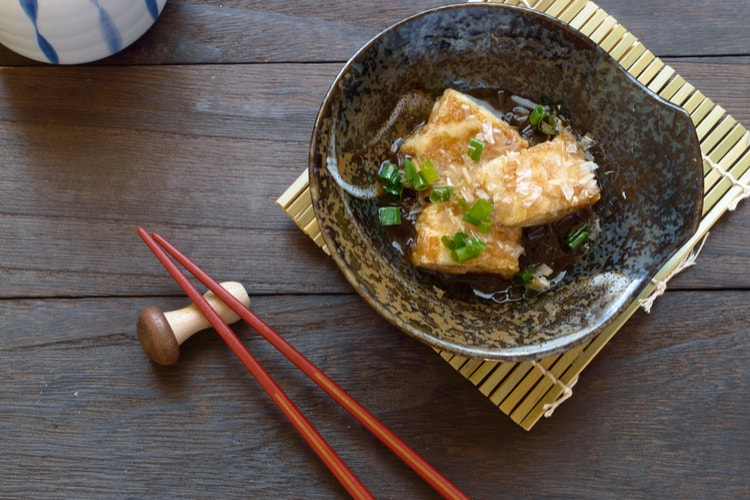 A popular snack in the local Izakayas usually served along with beer. Edamame is basically immature soybeans that have been prepared.

This is one of the most fun Japanese foods to try while visiting Okinawa. It’s not really a grape, it just looks like grapes, but in reality, it is a type of special seaweed that is grown in Okinawa. 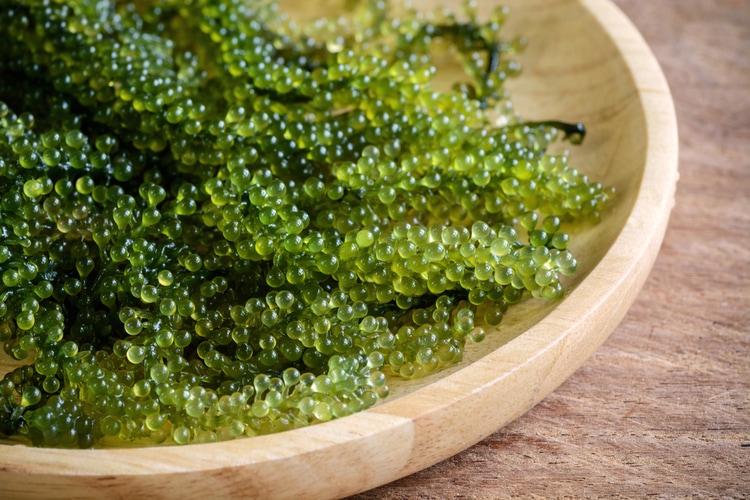 Yakisoba is a fried noodle dish made by stir-frying or barbecuing a combination of noodles and various toppings. It is one of my favorite Japanese dishes, and it’s a real classic.

While this noodle dish is called Yakisoba, the soba noodles used for this dish don’t contain any buckwheat.

A typical Japanese hot pot dish where you cook your own food at the table.

Usually, you get many different kinds of seafood and meat as well as sides of tofu and vegetables. Then you pick up whatever you like with your chopsticks and put it in the hot pot and cook it.

Shabu Shabu is a great food experience in Japan that shouldn’t be missed. If you have the chance of going to a restaurant with a local, don’t miss it as you will likely have a more enjoyable experience when someone can show you how it’s done traditionally.

Gyudon is a popular Japanese dish consisting of a bowl of rice with beef that has been seasoned with various spices. Sukiya is one of the chain restaurants that have become famous for their Gyudon, and it’s inexpensive as well.

It’s also a good option if you want a quick lunch as the preparation is just a few minutes.

Chawanmushi literally means tea cup steam, and it is an egg custard dish that is unique to Japan. Unlike other egg custards, it’s not sweet but is instead served with toppings as shiitake mushrooms, kamaboko, ginkgo, and boiled shrimp.

It is served in a container that looks similar to a teacup, hence the name Chawanmushi.

Another traditional food experience in Japan that shouldn’t be missed is Teppanyaki, which is basically a dinner where the chef is cooking your food in front of you.

There are no rules for what can be served, but usually, there is a set menu to choose from. It will be a fun memory for sure! 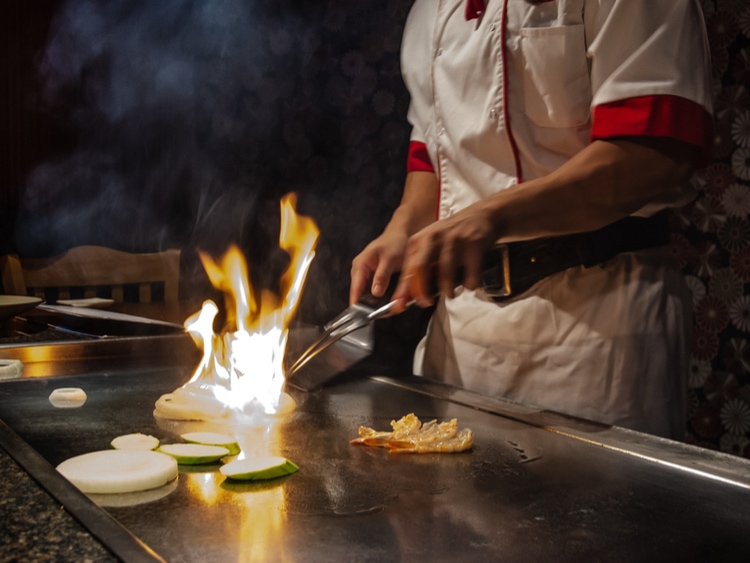 Another famous Japanese dish that consists of thinly sliced meat that is then simmered or slowly cooked at the table. It’s served in the nabemono style (Japanese hot pot).

If you want to eat like the Japanse royals in a traditional setting, then you should try Kaiseki, which is a form of Japanese fine dining, where you will be served a multi-course dinner.

What do the Japanese eat for breakfast?

Well, there is a big difference between traditional Japanese breakfast, and what the majority of locals eat today. This is due to a rapid change in how society is build up, and today, most people have limited time thus choosing a quicker option for food.

Back in the days, it was common for the woman to prepare breakfast. Today, both women and men often work full-time jobs and many Japanese people, therefore, buy ready-made food from a convenience store to eat on-the-go.

Some traditional dishes for breakfast in Japan 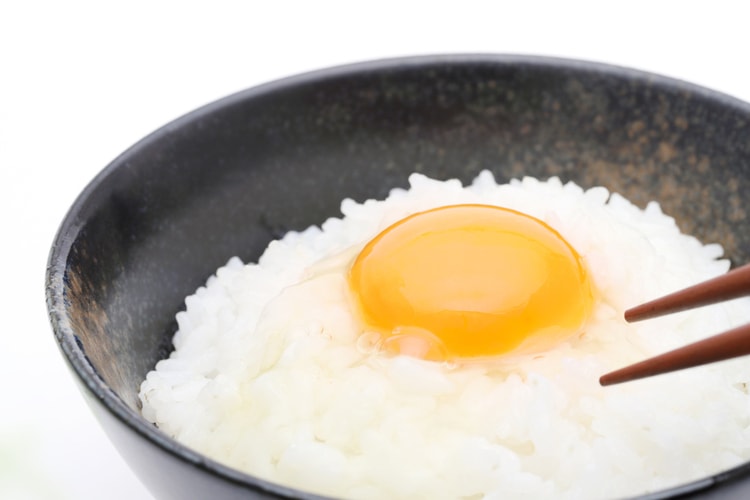 Besides sweet desserts, there are also several endemic fruits in Japan that the locals love and eat for dessert. 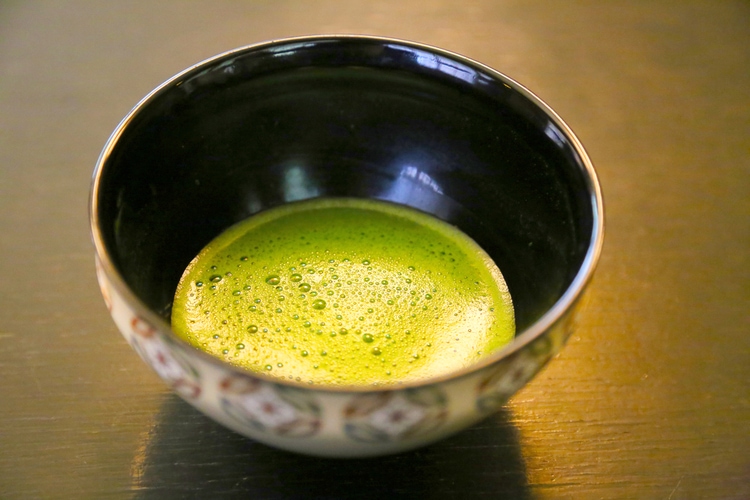 More about the Japanese Cuisine

The Japanese cuisine consists of both regional dishes and traditional food from Japan. Food is very important, and it is considered an art to create tasty and elegant meals. Seafood is very common as are other types of meat.

However, there are several traditional dishes that are vegetarian due to Buddhism. Sushi is the most famous Japanese food worldwide, but other specialties like Ramen, Tempura, and Yakitori are becoming more popular as well.

As of 2018, Japan has the most 3-starred Michelin restaurants in the world, and Tokyo is the city that has the most of them. 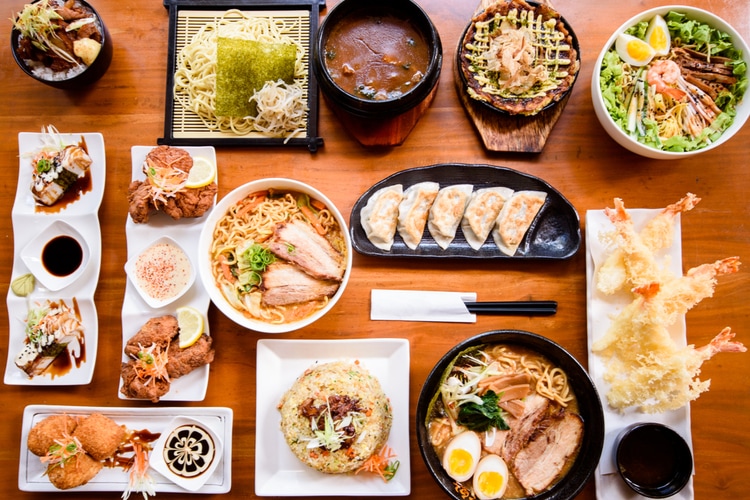 Which is your favorite Japanese food? Leave a comment below!