Top Things To Do In Yogyakarta 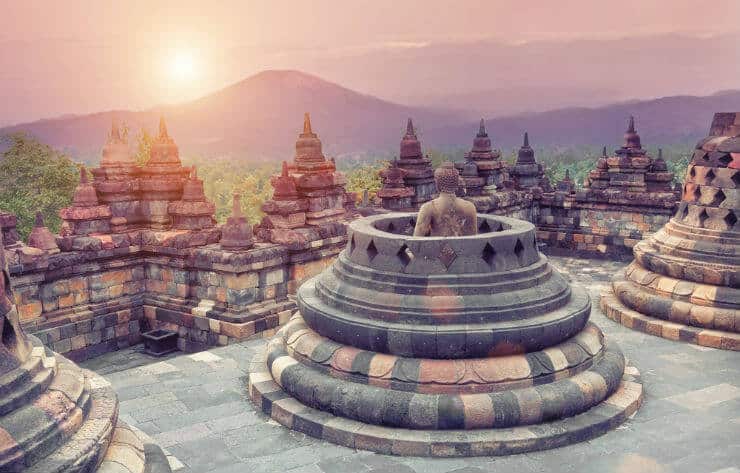 Yogyakarta is one of my favorite destinations in Asia, even though I was struggling to recover from salmonella I got India, I managed to depart from Yogyakarta with great memories for life.

The locals of Yogyakarta played a big part of my positive experience, and everyone I met was super friendly and both curious and helpful despite language barriers. All around Yogyakarta, you can also enjoy many scenic spots and cool temples!

To make it easier for you, I’ve made a list of my favorite attractions and top things to do in Yogyakarta as a tourist!

Without a doubt one of the world’s coolest temple areas. Borobudur is a Buddhist temple that was built around 700-800 AD. The temple area is on the Unesco list of world heritage and a common place to visit in Yogyakarta.

Try to time the sunrise and sunset (it is truly magical from here). In addition to a breathtaking sunrise and sunset, the temple area is also well-preserved and have majestic details. Borobudur has also been practically abandoned since the 1400s since Islam became more and more dominant in Jogja.

A nearly 3,000-meter-high stratovolcano that is also the most active volcano in the whole of Indonesia. Smoke comes out from the smoldering opening at an average of 300 days a year.

The hike up to the top is not something for the average-joe. To make it, you need to be used to hiking or have a great will power.

A large national park that has been converted into a kind of adventure park. Perhaps you already have seen a picture from Kalibiru, since it’s gone viral in social media. It is an incredible place where you get some adventure on your holidays.

In the picture, it looks almost unreal, but in reality, it’s quite safe and not that high to climb, and you also got a safety rope attached to your body.

Sure it’s still high above the ground, but the part where you climb to the platform is not high, and security personnel supervises it. However, you will get cool pictures, and the view from the top platform is absolutely fantastic! 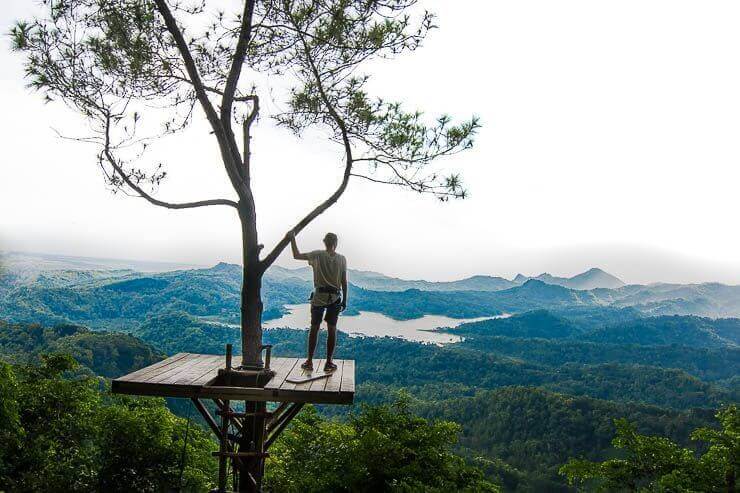 A gigantic cave located about 1 hour from Yogyakarta by car. Here you’re treated to an exciting adventure where you immerse yourself into the cave via a safety line.

Goa Jamblang is not just “a” cave; it’s actually part of a larger cave system, but it is especially this cave that has become famous thanks to the cool effect of light shining straight down into the cave like a ray of light in the darkness.

The cave hole you’re immersing yourself into is at least 25 meters in diameter and 50 meters in depth.

Indonesia is known worldwide for its food in general, but especially for its street food. There are plenty of small carts and food stalls selling various Indonesian dishes.

Something that you should not miss is the Chicken Satay!

Pamper yourself at a spa

Going to the spa is common in Indonesia, both among locals and tourists. The range is large, and there are many spas to choose between.

Moreover, it is super cheap, so take the opportunity to pamper your body and soul when you visit Yogyakarta!

This temple is the largest Hindu temple area throughout Indonesia. Prambanan was built in 850 years and thus has a lot of history to offer its visitors. Since 1991, the temple complex is also a part of the UNESCO world heritage list. 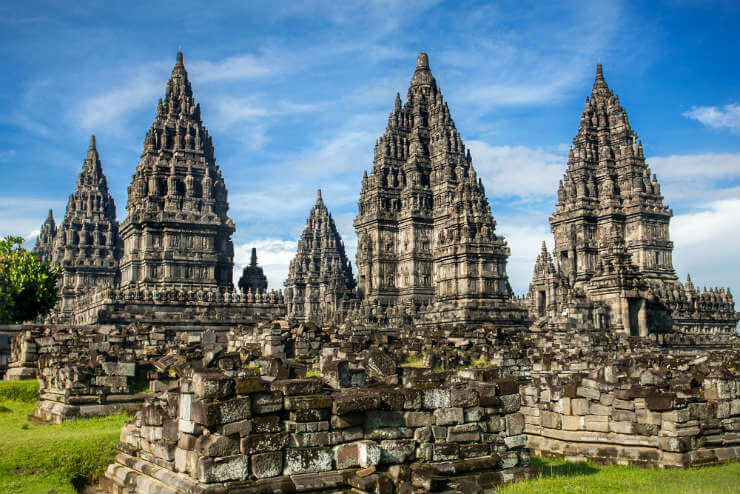 Other tourist attractions and things to do in Yogyakarta

A large shopping mall with a wide variety of shops and restaurants.

A lovely beach which is worth a visit if you fancy sunbathing and swimming. But there is nothing special about the beach per se, so there is no “need” to go here.

The beach is, after all, two hours away “Jogja” drive.

Another beautiful beach located approximately 1.5 hours from Yogyakarta city center. The best thing about beaches in Yogyakarta is that they are almost always empty!

A history museum where you can learn more about the Old Kingdom in Yogyakarta. The tour includes a guided tour and a traditional drink.

Unfortunately, it’s not allowed to take pictures inside the museum, but it’s worth a visit if you want to learn more about the Indonesian culture and history.

Top Things To Do In Brussels
← Read Last Post