Top Things To Do In Skopje

Skopje is an exciting city which definitely deserves more attention and thanks to the cheap direct flights via Wizzair you can now go here on the weekend from several European airports. Flights are available from 20 Euros return. Outrageously cheap in other words!

Upon arrival, you can expect much history and majestic buildings, but above all, beautiful nature outside the city. From Skopje, it is possible to visit both the Matka Canyon and the magical Lake Ohrid. During winter one could even go skiing in Macedonia.

In this article, I share some of my favorites when it comes to attractions and things to do in Skopje as a tourist!

The fort in Skopje (Kale)

In the old part of Skopje, you can visit a fort originating from the 500’s. The fort has since been rebuilt over the years and even destroyed by an earthquake, in the year 1963. But there are still some old parts left of the fort.

On top of the fort, you also get a great view of the city.

Like much else in Skopje, everything is gigantic, including the big fountain and statue in the Square’s center, and in the vicinity of the square is even a triumphal arch, which is a beautiful attraction that often remains in the background.

At festivals and events, it is here on this square that people gather, and there are of course lots of restaurants, cafes and bars nearby.

Skopje has a somewhat weird amount of statues standing around in the city. It has actually gone so far that the people rebelled against the government because they rather invest money in building statues and majestic buildings than to help the people.

As a tourist, you can, however, take the opportunity to admire all the magnificent and gigantic statues around the city. One favorite is the giant statue in the middle of Macedonia Square which is said to depict Alexander the Great (some claim that it is just a regular soldier). And of course, this magnificent statue has an equally grand fountain beneath him.

Another famous statue in Skopje is the Olympia (Alexander the Great’s mother) depicting her, when she is breastfeeding Alexander. This particular one is also the only uncensored statue in Skopje.

The reason for having so many statues is said to be that they want to showcase all the famous people and the country’s rich history.

Skopje locals go here to enjoy the peace and get away from the big city pulse. Mount Vodno offers a nice natural experience with great views and excellent hiking trails. On top of the mountain, you can also see the famous landmark, the Millennium Cross.

An artificial lake that is covering an entire area of 5,000 hectares. Matka Canyon is undoubtedly one of Macedonia’s better attractions and a must place to visit when you are in Skopje. The lake is located about 20 minutes from town by car. Taxis cost about 3-4 euros.

Once there, you can hike along the canyon and enjoy the beautiful views. If you like adventures; it is possible that both climbing and kayaking. There is also a cave which is popular to visit, called Vrelo. 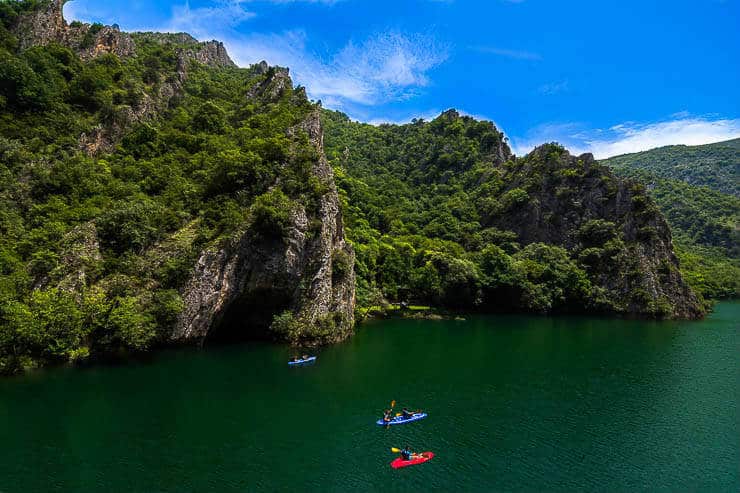 The Old Bazaar in Skopje has since the 1200s been the city’s center of commerce. Even today, the Bazaar has managed to retain much of its charm. The bazaar area has everything from watchmakers and repairers to woodcarvers and tailors, and of course vegetables and cevapcici.

Lake Ohrid is Macedonia’s premier destination and from Skopje, it is possible to go there for a day trip, but I recommend that you stay at least overnight, since it is incredibly beautiful. The journey by car takes about 2.5 hours, so if you just go for the day you have to start early and come home late to be worth it.

Ohrid is a city that has its roots in antiquity but at that time under the name Lychnidos. Some claim that Ohrid’s history goes further back in time than that, and despite what’s true or not, one thing is sure, and that is that Ohrid is a city full of history.

Besides ancient monuments once can also enjoy the beautiful beaches and scenic areas with mountains and hiking trails. Lake Ohrid is also famous for its parties during the summer.

Food and drinks are a big part of everyday life in Macedonia and Skopje, and there are plenty of restaurants and cafes. Some specialties that you should look out for are Tavce Gravche, Turli Tava, and burek.

One should not miss the local supply of wines or spirit Mastika. The fact is that Macedonia accounted for most of the wine production in the former Republic of Yugoslavia, and the tradition of wine in Macedonia goes way back in time.

Best of all is probably the low prices, though, which means that you can munch on local food and try different wines without spending much money.

Other tourist attractions and things to do in Skopje

A gigantic cross (the entire 66 meters high) that holds the title as the world’s largest cross. Millenium Cross stands on top of the Mount Vodno, and it was built as a memorial in connection to the 2000 years jubilee of Christianity.

One of the city’s most famous landmarks, built sometime in the 1400s, during Mehmet II’s era. The bridge connects the old part of Skopje with the new and modern district.

If you like history, it may be worthwhile to visit this museum. Admission costs only 300 MKD (about $ 5). The price also includes a guided tour. What is particularly interesting is their extensive collection of old coins and relics of Alexander the Great.

If you like churches and especially fresco paintings, this is an attraction that you should write down on your list of things to do in Skopje. The church is located at the Vodno Mountain and thus located a bit outside the city. Something else that is interesting about this church is all the legends about how the church withstood earthquakes, fires, and Ottoman invasions.

There’s also nothing wrong with the lovely view over Skopje that you can enjoy from the church.

This shopping center is located about 10 minutes outside the city center by car. An Uber costs about 2 euros. Here are several international chains represented, and prices are generally lower than in other European countries

Not one of the “must” things to do in Skopje, but if you have time and a desire for shopping, at least there’s a possibility.

Top Things To Do In Saranda
← Read Last Post

Hey Alex! I also recommend going to see the old railway station hit by the earthquake and seeing the modern cathedral, St. Clement of Ohrid.

You made me very proud by reading this! Tack så mycket!