Top Things To Do In Amsterdam

Amsterdam is a lively and vigorous city that has something to offer all its visitors, regardless of age and interest.

Here you can party hard from early evening to late morning, or take a pleasant stroll around the channels and watch the beautiful houses, or visit the museums located in the city just to name a few activities

I love Amsterdam, and it is one of my favorite cities in Europe. Below I have put together a big list of attractions and things to do in Amsterdam as a tourist!

Bicycle along the canals

Did you know that Amsterdam’s canals cover an area of about 100 kilometers? In total, there are over two hundred channels to explore the city and its best do it by bike. The channels that you shouldn’t miss are the Herengracht, Keizersgracht, Prinsengracht, and Singel.

Biking in Amsterdam is an everyday thing, and since it’s mainly flat everywhere, it’s very easy to bike around town. Historically, the cycle is also a symbol of freedom in Amsterdam, which is quite clear as there more bicycles in the city than residents.

Rental bikes are available in several places from 7-10 euros, so do not pay more than that per day.

At the Daam Square in the center of Amsterdam, you’ll find the Royal Palace, which is open to the public. If you like architecture and art, you should not miss making a visit here.

Holland is known for its many kinds of cheese, and they do come in all flavors and shapes. Amsterdam is no exception when it comes to cheeses, and there are small shops that sell cheese on each and every other corner of the city. Most places even offer you to taste samples of their cheeses.

Some of my favorites were smoked cheese (tastes like sausage), chili cheese, and cream cheese!

Next to Starbucks to the left of the area Singel, you will find an excellent cheese shop with knowledgeable and friendly staff, and you can also follow them up on the second floor and learn more about cheese making (completely free).

A cozy area to stroll around with many cafes, shops and restaurants. Here you can easily spend a few hours. To visit the Jordaan is one of the must things to do in Amsterdam!

Almost everywhere you go in Amsterdam you can see coffee shops, where they sell marijuana and hashish, both as pastries and to smoke. It is perfectly legal to eat and smoke hashish and marijuana in Amsterdam as long as you are over 18 years.

One’s opinion and thoughts about this are, of course different, but I would probably say that it is no more dangerous than alcohol, so if you feel like trying, Amsterdam is quite an obvious place to do it. “The Bulldog” was Amsterdam’s first coffee shop, and today it has opened up coffee shops in several locations in the city.

Walking around in Amsterdam’s Red Light District (The Sex Quarter) is quite surreal. It’s hard to put words into the experience, and no matter what you think of the place, it is certainly something that must be experienced!

For those of you who have not heard about the Red Light District, this is an area where prostitution is legal. Both boys and girls are inviting and flirting with people from the shop windows while waiting for customers. There are even a few clubs where you can go and see a live sex show.

Whether you think it is ok to sell sex or not, is entirely up to you, but it might be good to go there with an open mind and remember to show respect towards the people standing in windows.

If the sex shows are good or not, I have no idea. However, I saw long queues at all places, so it’s without a doubt something that’s popular. Those who stood in the lines were people of all different ages, couples and older as well as younger friends.

A well-preserved courtyard with classical architecture and an incredibly peaceful spot in an otherwise bustling city. The place has become especially popular among photographers, but please remember that people actually live here, so show some manners and respect!

The courtyard closes at five, and no visitors are allowed after that. Begijnhof is centrally located and is a place I can recommend for a quick stop, at least to take a picture and have a look at the gorgeous courtyard.

Fresh herring is one of the Dutch delicacies and a must to try when visiting Amsterdam. There is plenty of food trucks and “boxes” where they sell fresh herring with pickles and onions. It’s really unique! 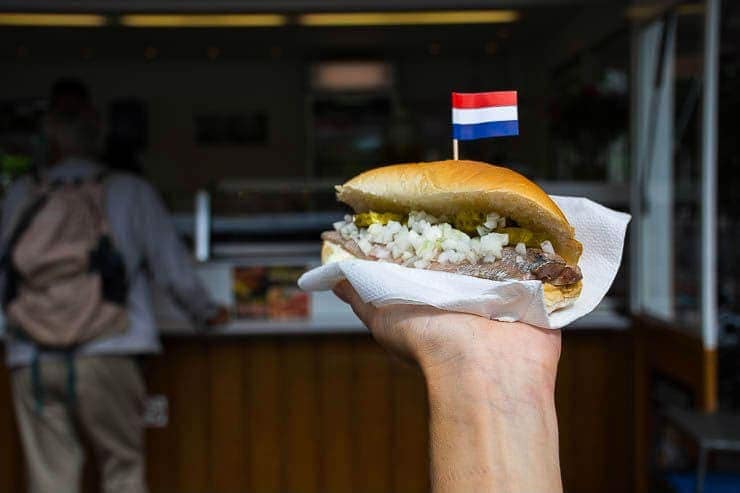 A traditional local market which is located in De Pijp. It sells everything you can imagine, such as local crafts, cheese, clothes, cosmetics and of course, one and another herring.

It’s always nice to swing by the Albert Cuyp market.

One of Amsterdam’s most popular tourist attractions. It was here that Anne Frank (Anne Frank’s Diary) and her family lived during World War II, and it was in this house they were hiding.

Want to know more about her story? Then it’s definitely worth a visit.

Other tourist attractions and things to do in Amsterdam

Museums are not really my thing, at least if they don’t showcase old mummies, pirate ships, or something from the Viking Age and the Medieval era.

But the Rijksmuseum is a popular tourist attraction in Amsterdam (number one on TripAdvisor) and is certainly worth a visit if you are interested in art.

But be prepared to share the space with hundreds of others. And make sure to buy a ticket in advance to avoid long queues.

Here you can check out an extensive collection of one of the greatest artists of all time, Mr. Vincent van Gogh. This museum is just like the Rijksmuseum crowded, so make sure to buy tickets in advance if you know that you want to go here.

Amsterdam Central Station is both the country’s largest transit point and a popular tourist attraction. It attracts visitors primarily because of its majestic architecture.

A windmill is perhaps nothing fancy (at least not for me, as there are plenty of them in the Southern parts of Sweden), but they are after all very beautiful and charming, and often there is also a cozy café next to the windmills.

Same is the case in the Netherlands, and in Amsterdam, you can see as many as eight windmills.

If you haven’t seen one before, make sure to stop by one of the city’s windmills!

One of the largest Pride festivals in the world is held each year in late July until early August. During these weeks it is a festive atmosphere and lots of party people everywhere.

Are you looking for party and night life? Then, you have come to the right place. In Amsterdam, you can party from early evening to late morning, and one can choose from rave clubs to house clubs and lots of festivals and music events.

Boat trip along the canals

Boating along the canals is one of the most popular things to do in Amsterdam and in case you’re up for it, I can recommend that you rent a private boat (either boat or pedalo) instead of going on the regular boat trips that are way over priced.

A green oasis for those who want to relax among the lush nature and trees, perfect as a picnic spot. A great break from the city life!

Top Things To Do In London
← Read Last Post