15 Best Things to do in Toronto (Canada) 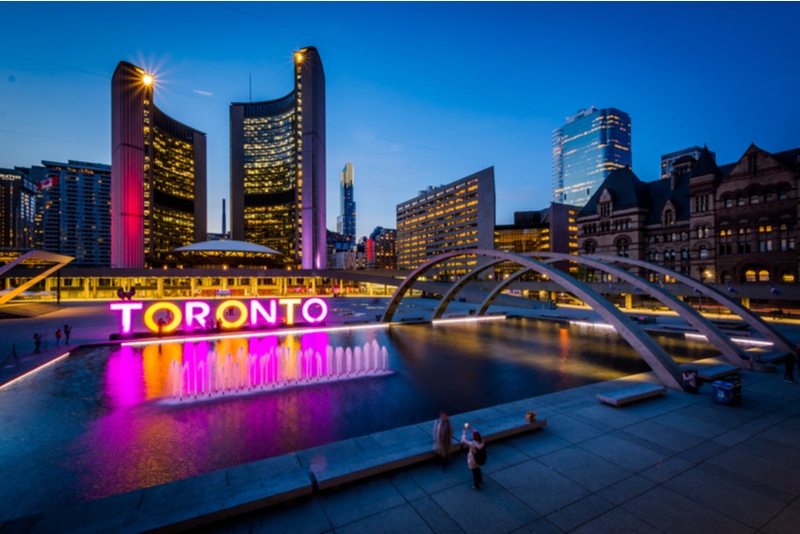 Here’s a list of the 15 best things to do in Toronto (Canada), along with famous landmarks, museums, and other points of interest.

Toronto is one of the largest cities in Canada, and it’s known for being a multicultural city with a wide range of nationalities and food from around the world.

No trip to Toronto would be complete without a trip to the CN Tower, one of Canada’s most iconic structures. Towering 553 meters into the Toronto skyline, you can see this Toronto landmark from all over the city, day or night.

Take an elevator ride to access the observation deck, where you’ll be greeted with panoramic views of the city and beyond; on a clear day, you’ll even be able to spot Niagara Falls in the distance.

There’s also an incredible 360-degree restaurant and a glass-bottomed floor with views of the ground 342 meters below. 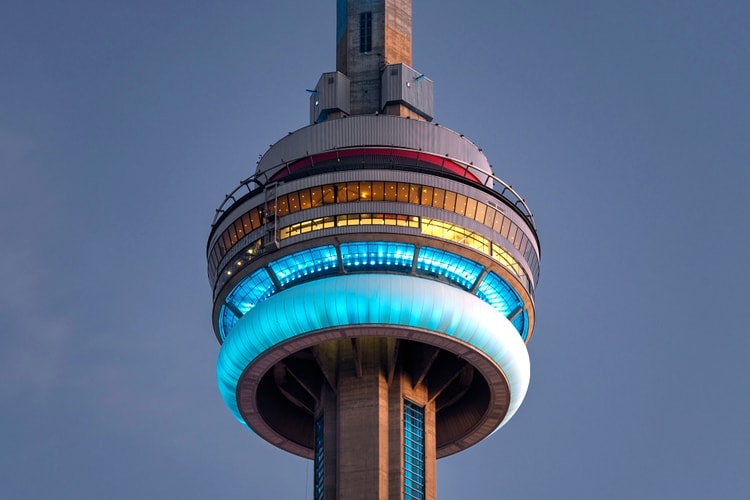 Casa Loma was initially built as a home for the financier Sir Henry Mill Pellatt in 1911, but today the house stands as a museum and historical landmark in Toronto.

The castle is fit for a king and is decked out with towers, secret passageways, a vast wine cellar (it holds more than 1500 bottles), and stables. After touring the property, stroll around the 5 acres of gardens are filled with pretty fountains, wildflowers, and sculptures 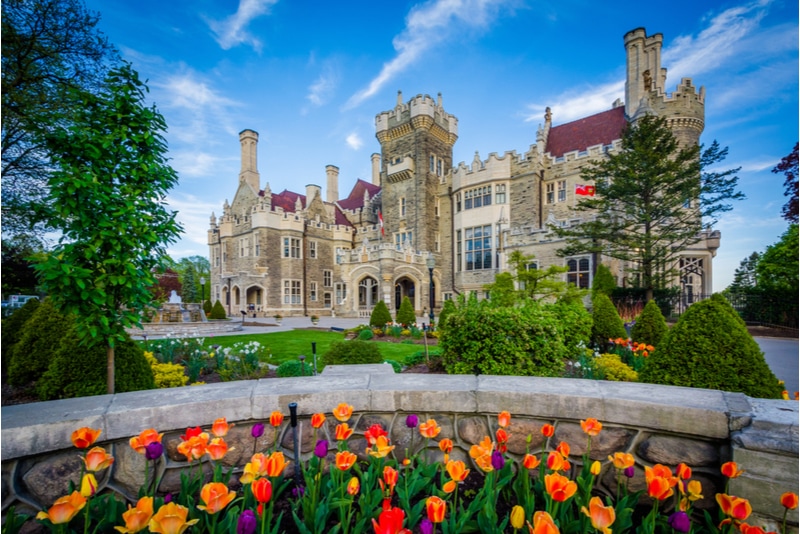 Head to St Lawrence to see the work of over 120 vendors, merchants, and artisans. The 200-year-old market is a place to taste great food, shop for locally-made produce and discover a part of Toronto’s history.

There are three parts to St Lawrence Market, each offering something different. The South Market consists of stalls filled with fresh fruit, vegetables, meat, fish, and more. 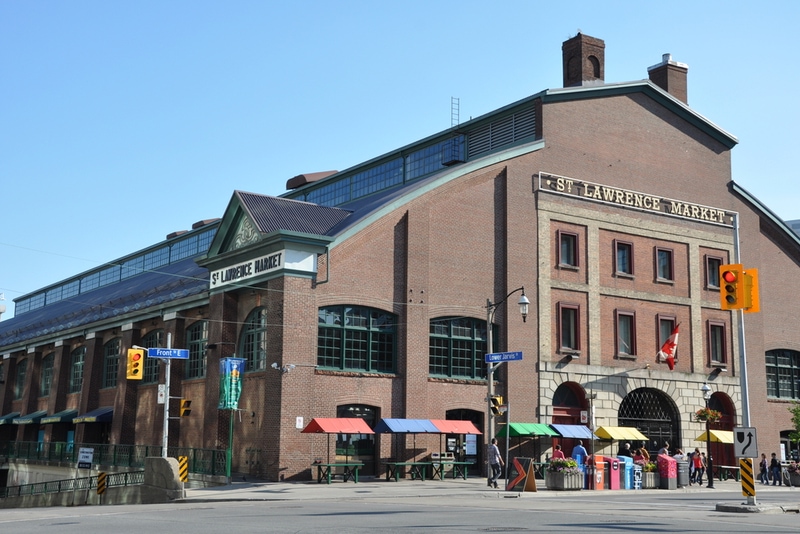 Just a short ferry ride from downtown Toronto takes you to Toronto Island Park which is a group of 15 islands connected through pathways and bridges. The 5km island runs from Ward’s Island to Hanlan’s Point and is a great day out to escape bustling city life.

There are beautiful beaches to explore, bikes to rent, kayak and canoe hire, a boating marina, beautiful outdoor areas, and even a theatre. Be sure to check out the 200-year-old lighthouse, the trout pound, and one of the local restaurants. 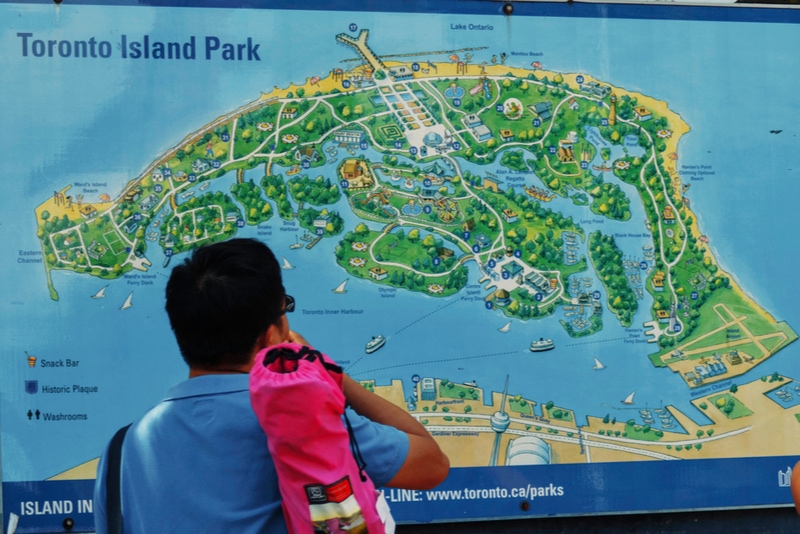 The collections here display a range of archaeological, natural science, and art objects showcasing how the world came to be as we know it today.

There are numerous hands-on, interactive exhibits to help immerse you in history, letting you explore everything from ancient Egypt to a time when dinosaurs roamed the land. 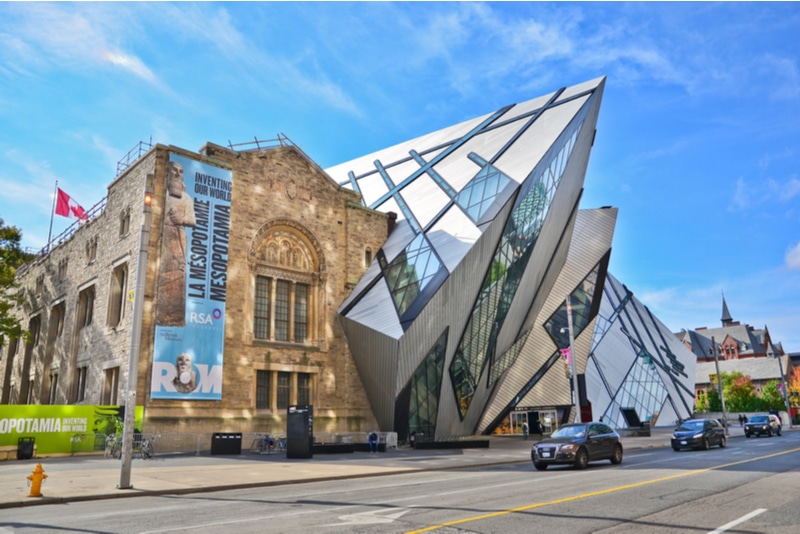 Toronto offers one of the most eclectic dining scenes in the world, so it may be challenging to know where to start when it comes to choosing where to eat. Join Toronto Food Tours, a chef-owned and operated business, to discover the best of the city’s eateries.

There are plenty of tours to choose from; dine on authentic Asian dishes in Old Chinatown, get a taste of Little Italy, try a traditional lobster maritime supper, and much more… the choice is yours.

Great hockey players are one of Canada’s finest exports, and there’s no better way to get to grips with the sport than at the Hockey Hall of Fame. The museum boasts one of the most extensive collections of hockey memorabilia from across the world.

Inside, you’ll be able to take part in interactive games, check out exhibit’s on the sport’s best players, and check out multimedia stations to find out more about the game.

See the coveted Stanley Cup trophy, one of the most coveted trophies in professional sport, and get a selfie with it too! 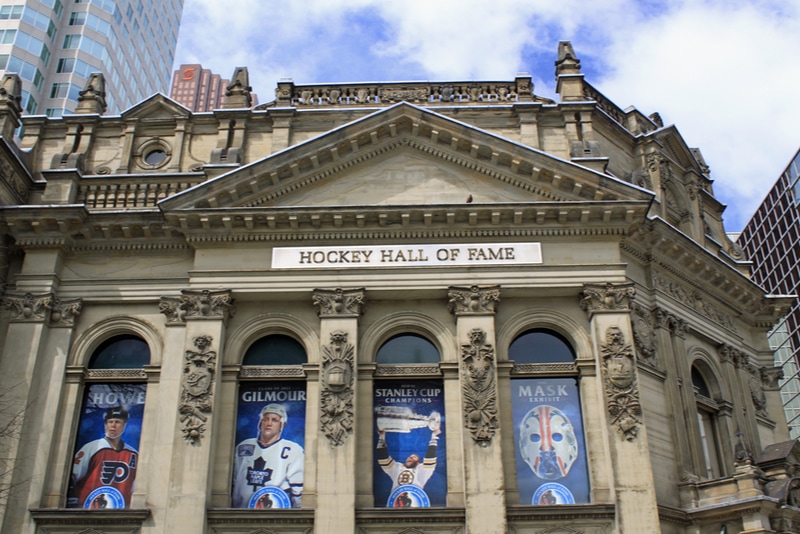 The Distillery Historic District is one of the city’s most picturesque areas, featuring Victorian-era buildings and pretty cobblestone lanes. The national historic site was Toronto’s first distillery, though it now houses high-end boutiques, art galleries, and upscale restaurants.

The laneways, quaint courtyards, and charming buildings immerse you in Toronto’s history and heritage, taking you back to the district’s heyday of 1871. Explore the area on foot or, for something unique, hop aboard a Segway. 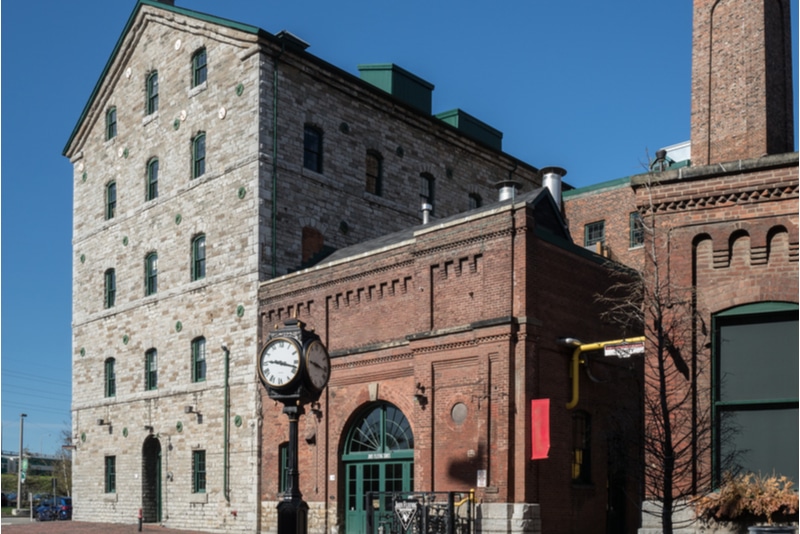 Referred to locally as ”the flatiron building”, the Gooderham Building was North America’s first example of a flatiron-style architecture. The historic building began its life in 1891 as offices for the Gooderham family’s distillery business offices.

Today, the national historic site stands tall in the St Lawrence neighborhood. It’s one of the most sought-after office spaces in the city, and also one of Toronto’s most photographed buildings.

Take a picture of the Gooderham Building, and you’ll see a perfect contrast of old and new; the old-style building paired with Toronto’s skyscrapers in the background. 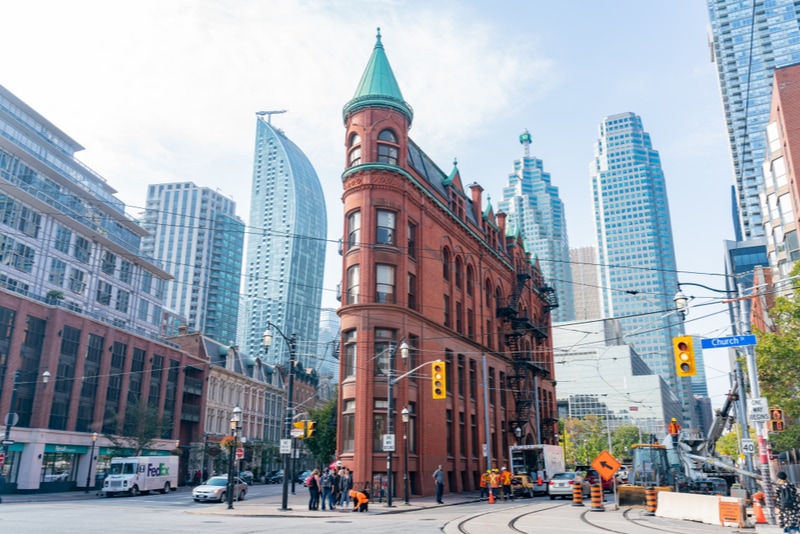 The AGO, Art Gallery of Ontario

The Art Gallery of Ontario is one of North America’s finest. The gallery houses everything from traditional Canadian artwork produced by local artists to an African art gallery.

The stunning ’Group of Seven’ landscapes is a must-see, depicting the vast and great nation of Canada.

You’ll also find modern, cutting-edge works alongside European masterpieces, as well as numerous rotating exhibitions. Take a guided tour of the gallery to learn more about the artwork on display. 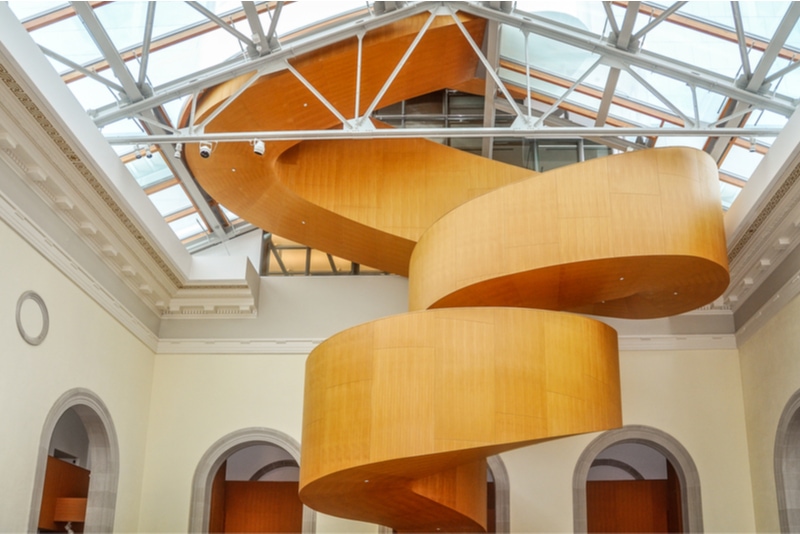 What started as a personal collection has now grown exponentially into a museum featuring over 13,000 objects. At the Bata Shoe Museum, you’ll be able to discover a surprising and charming display of shoe-related treasures from across North America.

The artifacts are displayed in an award-winning building designed by architect Raymond Moriyama, a nod to the style you’ll find inside too. See displays showcasing everything from chestnut clogs to ancient Egyptian sandals – there are over 4500 years of shoe history to uncover. 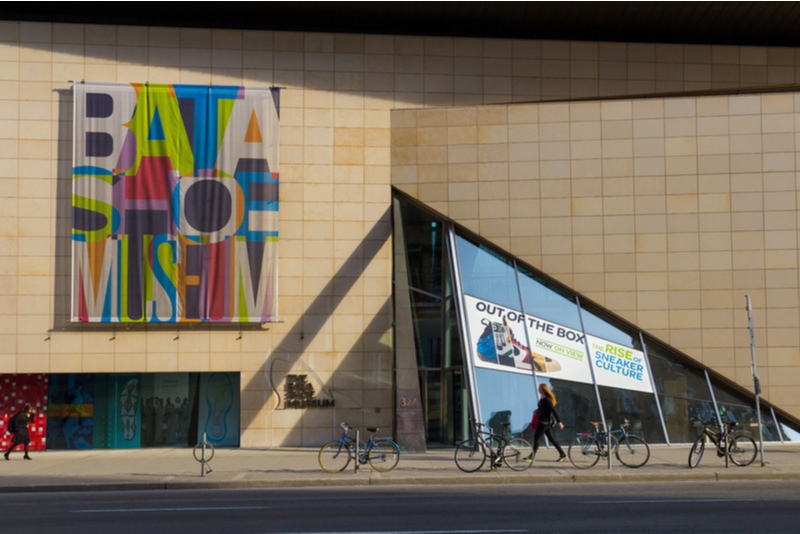 Each year Steam Whistle Brewery welcomes thousands of visitors who come to see the historic Roundhouse building, situated in the heart of downtown Toronto.

A half-hour tour of the high catwalks above the brewery gives you a chance to learn more about how this iconic brewery operates.

Afterward, pop into the on-site shop, learn more about the brewing process, try a freshly poured pint and mingle with the beer-loving staff who help make it all happen. 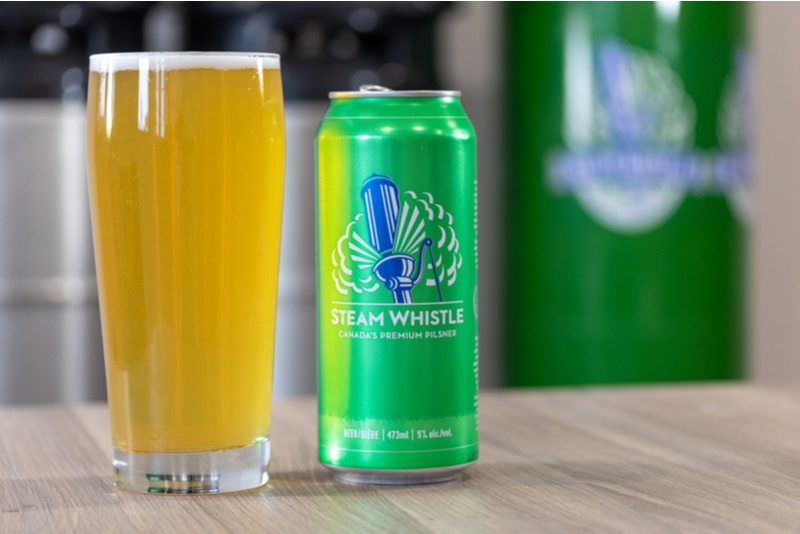 The Royal Alexandra Theatre is one of the oldest continually operating theatres in all of North America. The historic theatre is over 100 years old and is a masterpiece of beaux-arts architecture.

Despite extensive modernization and renovations, the theatre still thrives today as a haven of entertainment.

Since its opening, there have been over 3000 productions played at the hall. Today, you can catch mega theatre productions such as Hamilton or Jesus Christ Superstar at the theatre – be sure to book tickets for a show if you’re in town! 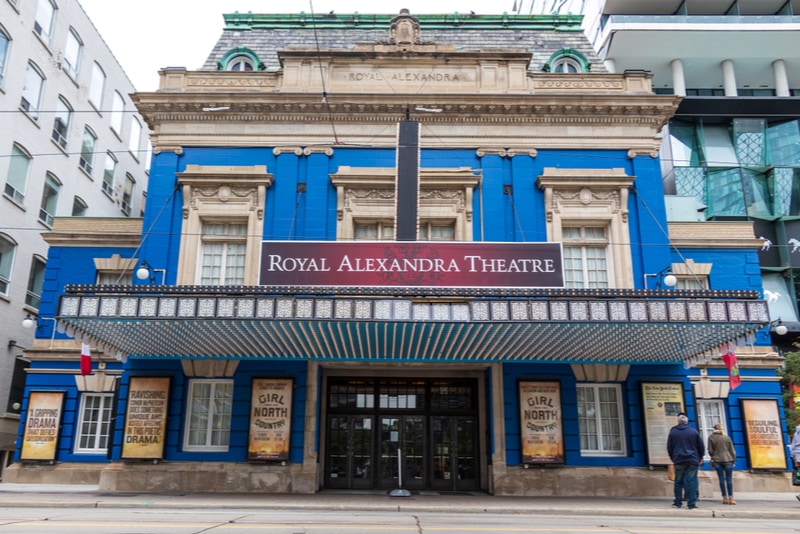 Escape city life and head to Toronto Botanical Garden, where you’re greeted with the opportunity to immerse yourself in nature. The nearly 4 acres of grounds and themed gardens aim to educate and inspire everyone who visits.

Get involved with a host of learning experiences, from garden tours to nature day camps, and special events to Canada’s most extensive private horticultural library.

The garden offers something for everyone of all ages, giving you the chance to learn more about the world of plants and ecosystems. 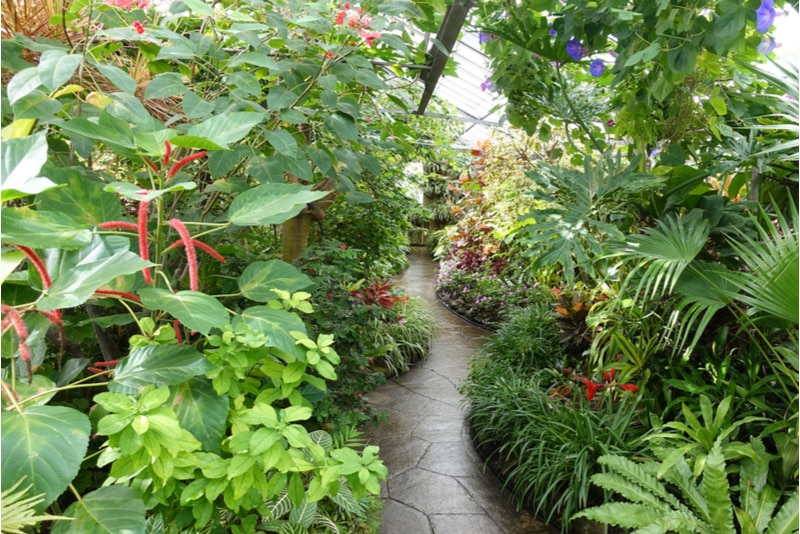 Discover Canada’s largest collection of original War of 1812 buildings at Fort York, located in the heart of downtown Toronto.

The 43-acre national historic site is commonly referred to as Toronto’s founding landscape and is both a Heritage Conservation District and a registered archaeological site.

Discover how Toronto’s topography, rail, and industrial histories have developed over 200 years and see the Fort, built initially to deter threats during the War of 1812. 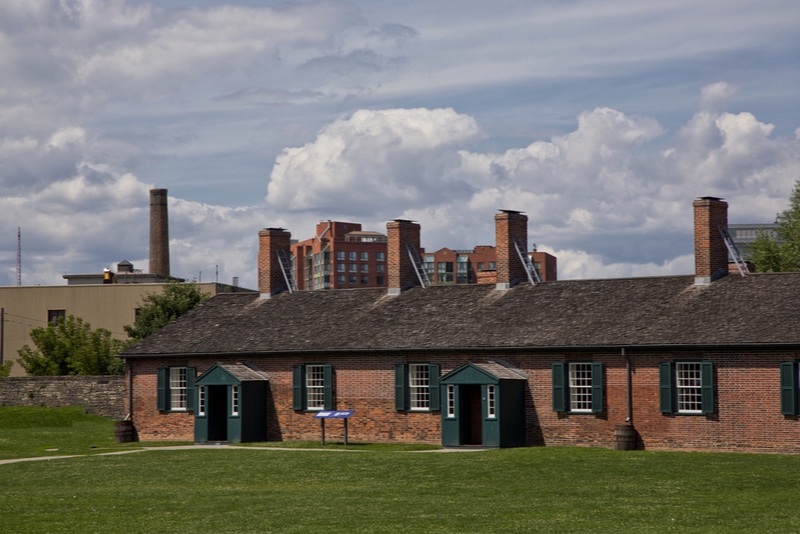 Want more recommendations on things to do in Toronto? Leave a comment below! 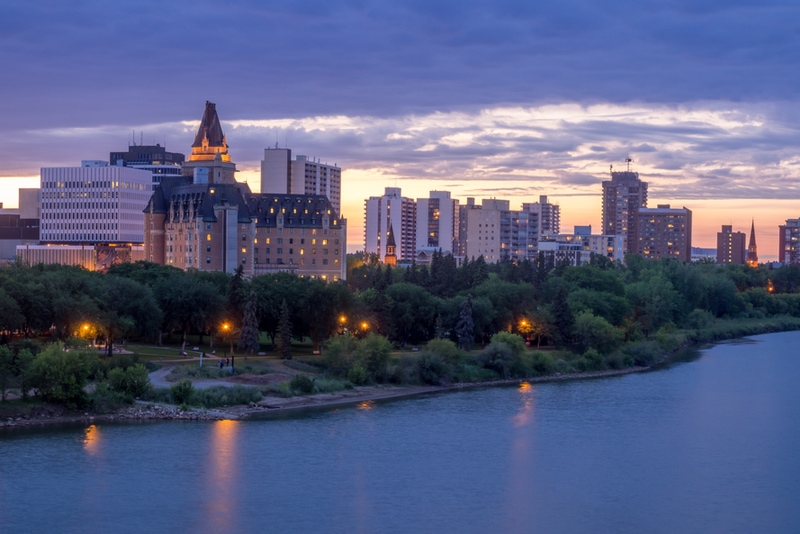 15 Best Things to do in Saskatoon (Canada)
← Read Last Post 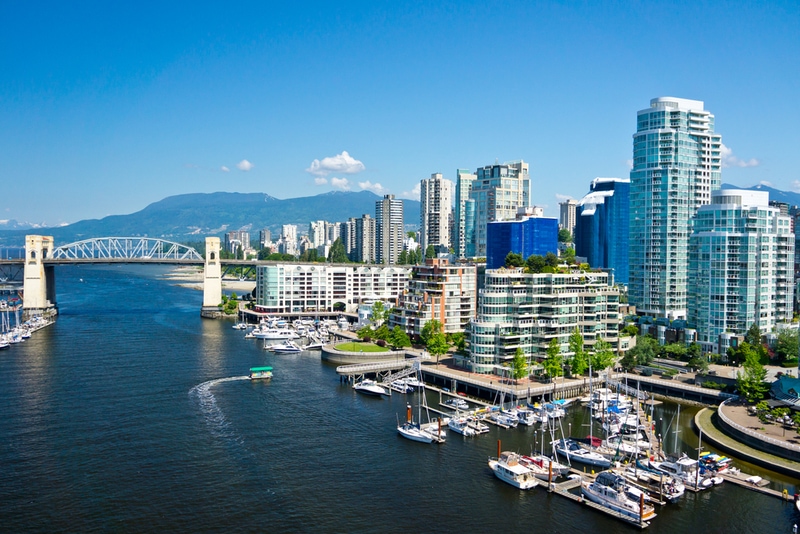