15 Best Things to do in Stavanger (Norway) 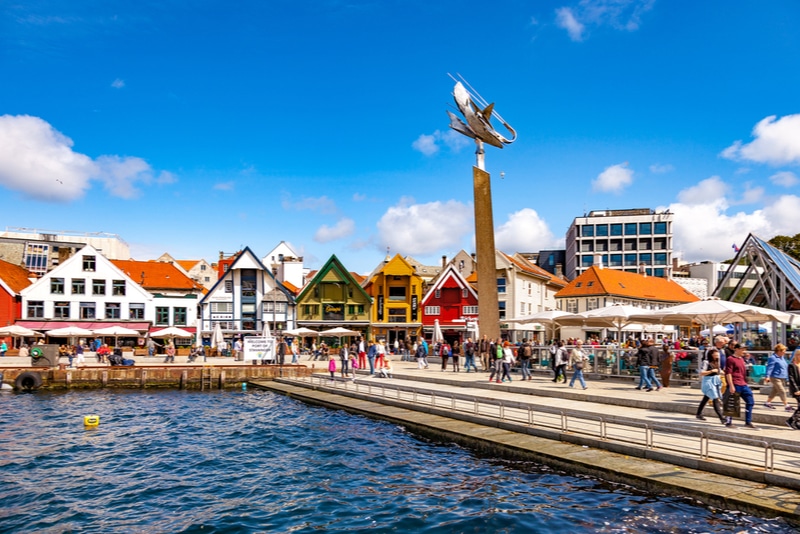 Want to find the best things to do in Stavanger? Here’s an updated guide with famous landmarks, museums, and activities in Stavanger, Norway.

Stavanger is one of the largest cities in Norway, located in the Rogaland fylke, on the west coast. It has become known worldwide for its oil industry with a nickname as the Norwegian capital of oil. Moreover, the city also features one of the best-preserved wooden neighborhoods in Europe.

In this article, I will share some of my favorite things to do in Stavanger as well as famous attractions. I’m also sharing some recommendations on hotels and the best areas to stay for sightseeing.

Gamle Stavanger, or Old Stavanger in English, is the historic area of Stavanger, known for its white wooden houses, galleries, and boutiques. This is actually one of the largest surviving wooden house settlements in northern Europe.

Compared to other old towns in Europe, Gamle Stavanger is quieter, especially in early Spring, which makes it more special for tourists to “feel” the town. In Gamle Stavanger, there are two museums worth a visit: the Norwegian Canning Museum and the Maritime Museum. Both are located on Nedre Strandgate. 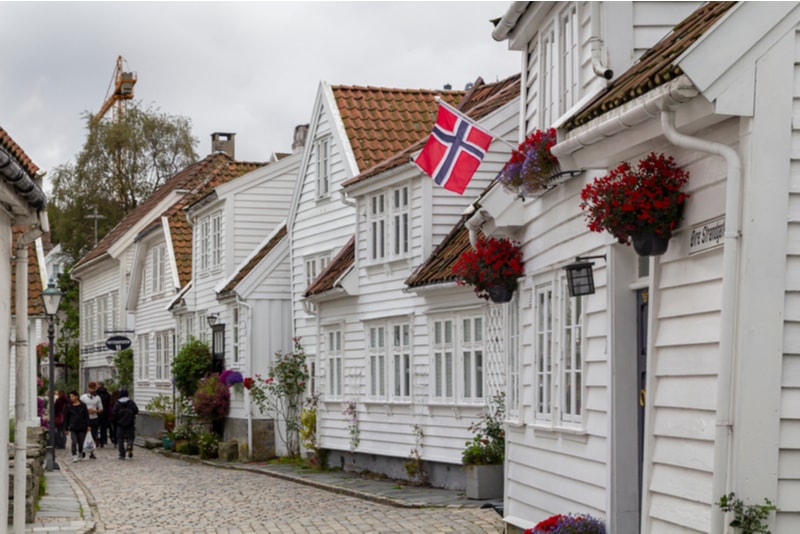 Norwegian Canning Museum looks like an old factory, because it is in fact an old fish canning factory, renovated and refurbished to be a museum.

This museum will bring you back in time when Norway was a poor country and small fish (brisling in Norwegian) were a thing for the people, and canning was the technique to keep the fish fresh to export.

With the help of fake rubber fish, you can become a factory worker with tasks like skewering fish, arranging fish in the smoking room, putting them in small cans, etc. 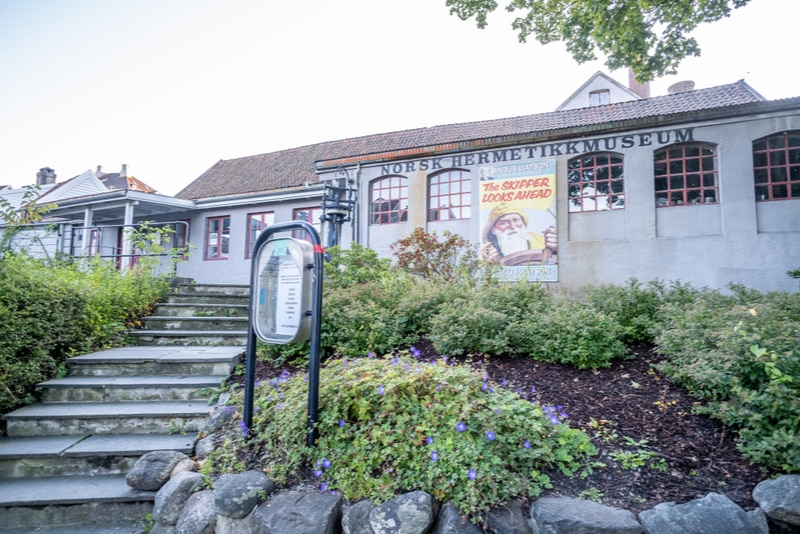 Admire the street art in Stavanger

If you’re a fan of street art, you shouldn’t miss the annual Nuart street art festival during August/September in Stavanger. During the festival, street artists from all over the world gather here in Norway’s third-largest city, to paint on walls donated by the locals.

A collection of around 30 pieces downtown is like a dream for all photographers and Instagrammers. There is also the possibility of having a guided walking tour, called “Nuart’s Street Art Walking tour”.

Stavanger Cathedral, known in Norwegian as “Stavanger domkirke” is a stunning church that was built in the 1100s. It features mixed elements and designs of the Romanesque/Gothic style.

A great fire struck the building in 1272, after which the choir was rebuilt in the Gothic style that can be seen today. An extensive renovation was later made in the 19th century, which included the whole church.

But, what makes this church extraordinary, is the fact that it has pillars that depict scenes of Ragnarok, which is what Vikings refer to as “the day of reckoning and end of days.”, despite being a religious building of the Christian faith.

Not far from the Cathedral is Øvre Holmegate – (probably) the most colorful street in Stavanger, as opposed to the all-white Gamle Stavanger on the other side of the waters.

It wasn’t until 2005 that Øvre Holmegate experienced a “renaissance” after local hairdresser Tom Kjørsvik suggested doing something totally unique with the area.

Craig Flanagan, an artist, suggested that all houses should be painted in different colors according to a certain color scheme. During summer, Øvre Holmegate is the hotspot of the whole city with cafes and restaurants full of locals and visitors. 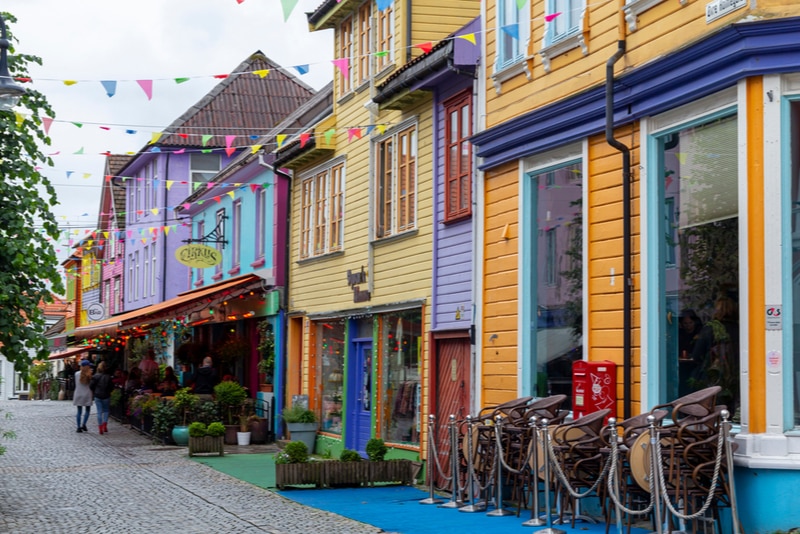 Lysefjord (Fjord of Light in English) is one of the most beautiful fjords in Norway and one of the main highlights in the Stavanger area.

A Lysefjord Cruise will take you to the heart of this 37-kilometer long and up to 1.9-kilometer wide fjord, fully packed with interesting places such as The Pulpit Rock, The Vagabond’s Cave, and the Hengjanefossen waterfall where you can enjoy a glass of crystal clear water straight from the waterfall. 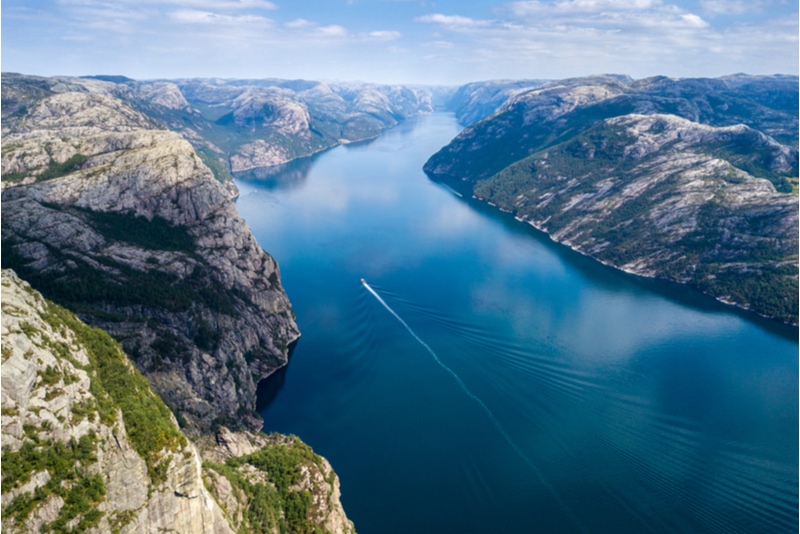 Take in the views from Pulpit Rock

Among the three most popular hikes in Norway, the Pulpit Rock is considered to be the easiest one, which takes you roughly four to five hours hiking. This flat-topped cliff rises 604 meters above Lysefjorden and spans approximately 25 by 25 meters.

The Pulpit Rock can be reached from Stavanger by road and ferry with a total travel time of roughly one hour, making it one of the most popular day trips from Stavanger. 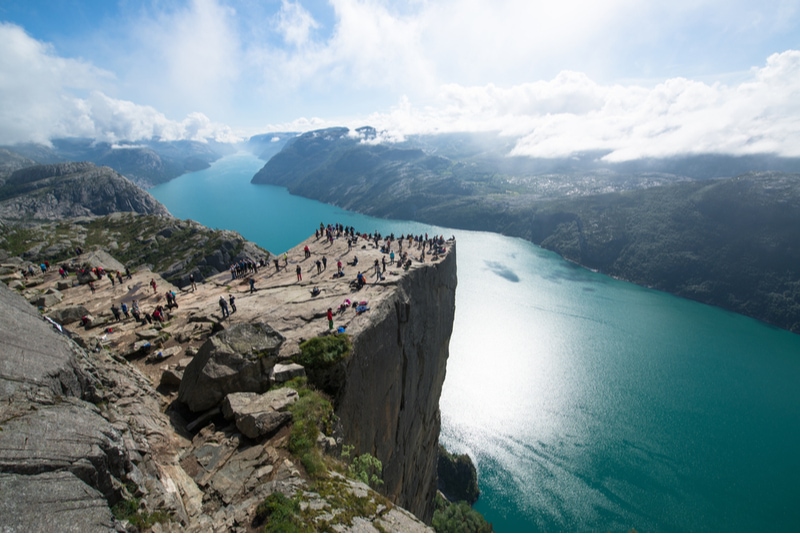 North Sea oil was discovered in the late 1960s in Norwegian waters. Both gas and oil have been vital when creating the modern version of Norway that we know today. The abundance of oil has also made it one of the largest exporters of oil in the world.

From miniature oil platforms to samples of rocks and oil from the North Sea, this place represents the whole Norwegian oil history in just one museum. Although renewable energy sources are needed today, oil has played a great role in making Norway, one of the richest countries in the world. 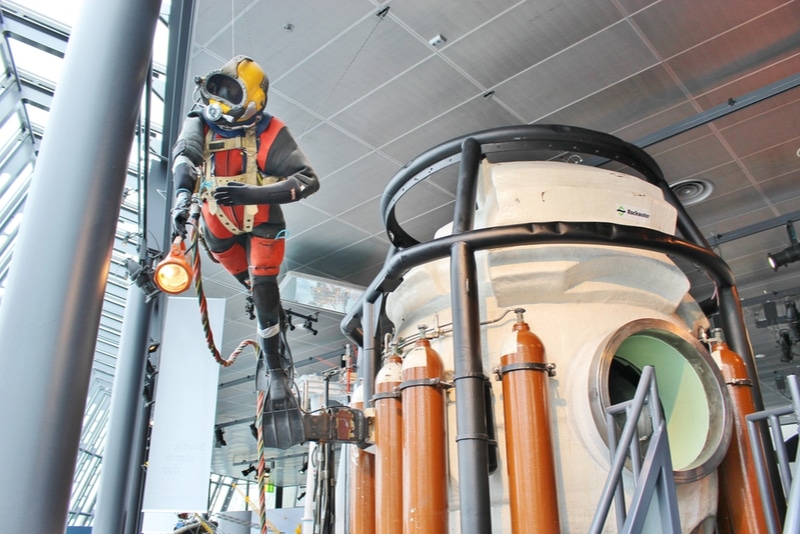 Villa Breidablikk was built for a leading ship and merchant owner named Lars Berentsen. The design was inspired by Gothic and Romantic influence, made in Swiss-style. The Villa dates back to 1881, and the architect behind Breidablikk is Henrik Nissen.

The craftsmanship, materials, and inventory feature various styles, such as Neo-Baroque, Neo-Rococo, Neo-Gothic, making the Villa and its interior, one of the best examples of the stylistic expressions of Historicism. Nowadays, rooms on three floors of the villa are open to visitors.

Skagenkaien is to Stavanger what Bryggen is to Bergen. This waterfront area is also where you’ll find the most vibrant nightlife street in the city, with restaurants, bars, and pubs in well-preserved wooden houses, mostly from the 19th century. 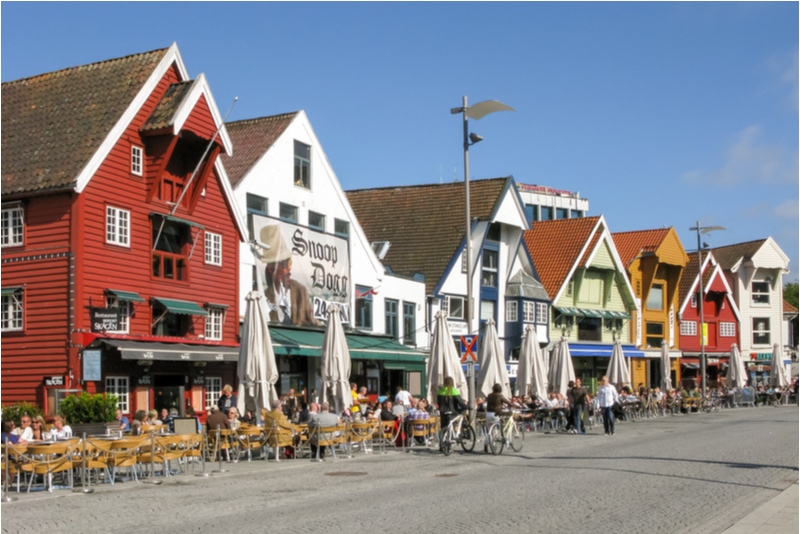 Jernaldergården means Iron Age Farm, and this one is a reconstructed farm revived in the 1970s after lying abandoned for 1,500 years. The farm was first settled in the Migration Period in the 4th century but was burned down and deserted about 200 years later.

The renowned Norwegian archaeologist Bjørn Myhre investigated the site in the late 1960s when it got recognized as one of almost 200 Iron Age farms in the Jæren region – one of the flattest regions in Norway.

As you can see, the huts were designed with small doorways, not to keep the warmth in but to make potential home invaders vulnerable to an attack by residents.

Not far from Sola International Airport of Stavanger, one can find Sola beach, a nice sandy beach where locals enjoy going during summer. It’s quite a long beach, stretching 2,3 kilometers. Solastranden is not only popular for sunbathing, but also among windsurfers. 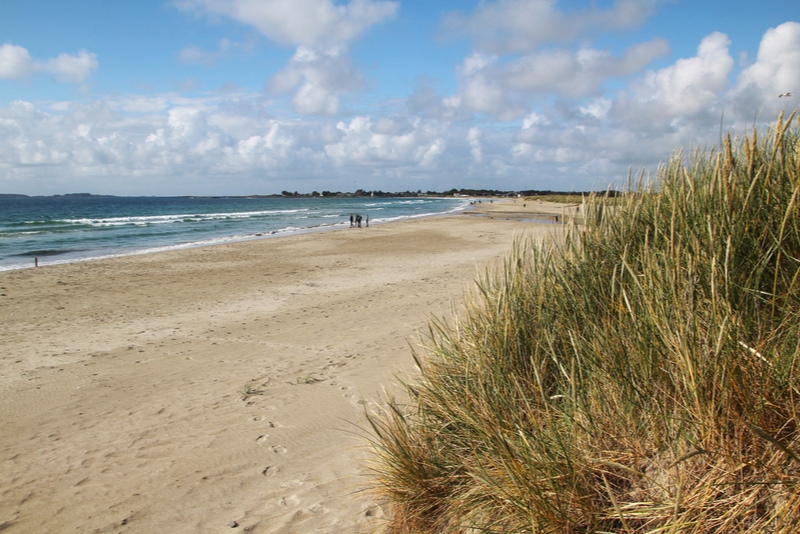 Valbergtårnet is a former watchtower located in Valberg. It was constructed in 1850 and although it’s no later in use, the tower remains a prominent landmark in Stavanger.

The Town of Cardamom is a very famous children’s book that features the last watchman of Valbergtårnet, named Tobias Sandstøl. In the book, the character is known as “Tobias in the tower”.

At the Stavanger art museum, visitors can admire some of the finest collections of Norwegian and international art in the country. Its roots extend back to the art society called Stavanger kunstforening in Norwegian and their permanent art collection (faste galleri).

Stavanger Art Museum is home to more than 2,600 pieces of art. It houses a unique collection by famous artist Lars Hertervig, which is particularly known for his romantic and personal landscapes.

If you want to explore the prehistory of Rogaland, the Museum of Archaeology has various antiquities and findings from the Vikings and all the way back to the Stone age and Bronze age. The museum also features artifacts up to the Middle Ages.

Moreover, there is also an ancient skeleton on display, belong to the famous Finnøy Polar Bear, which is estimated to be 12 400 years old. It was discovered on Finnøy in the village of Judaberg. It’s considered to be the most well-preserved polar bear from the Ice Age.

Where to stay in Stavanger

For sightseeing, it’s best to stay in a hotel near the city center. There are several hotels in the old town area of Stavanger, which are located within walking distance to most attractions.

From the center of the city, you’ll also have a short distance to bus stations and the ferry, which you can use to access other places outside Stavanger. Below are some hotels that are centrally located with good service and affordable prices per night.

How to get to Stavanger

The closest airport, Sola Airport is located just outside the city center. There are international flights available from a number of destinations, including Germany, Sweden, Spain, the United Kingdom, and many more.

How do I get from Stavanger airport to Stavanger?

From the airport, it takes just 15 minutes to drive, and there are frequent buses from central Stavanger to the airport. Many hotels are also offering airport shuttles, which is often included in the price.

The airport shuttle bus has frequent departures between the Sola airport and the city bus station. The price is 160 Norwegian crowns if you pay on the bus, or 136 NOK if you purchase your bus ticket online at www.flybussen.no.

A taxi from the airport to central Stavanger costs around 450 Norwegian kronor, which is approximately 45 euros. 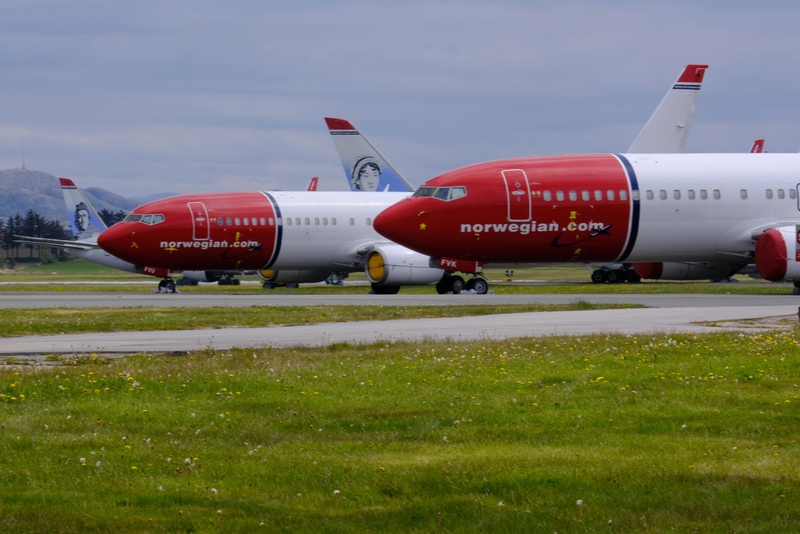 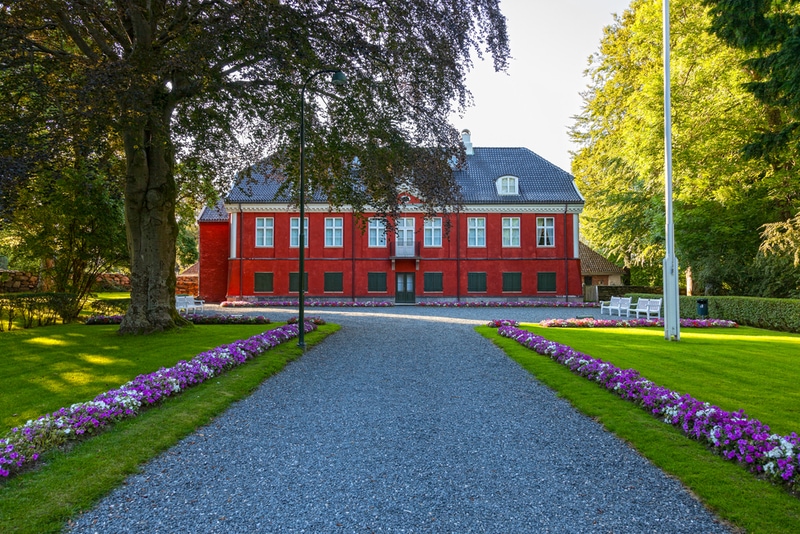 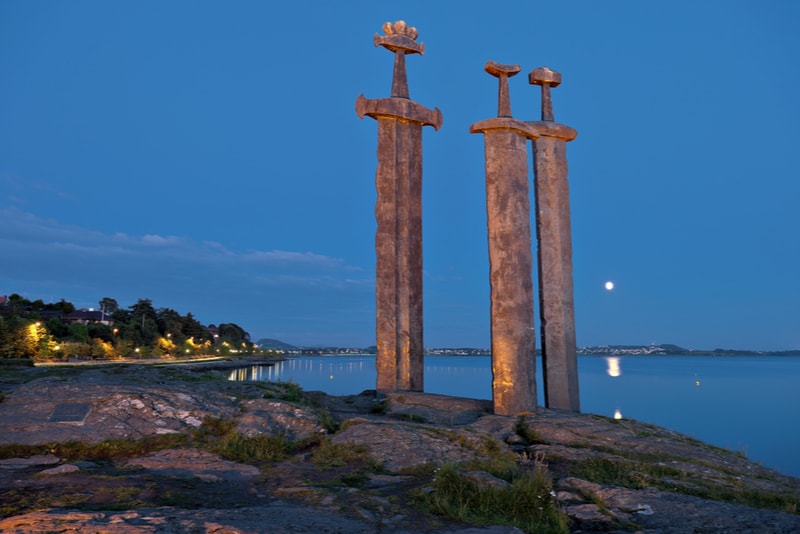 While fish is one of the main foods that I recommend to enjoy here (due to the city’s location on the coast), there are plenty of restaurants in Stavanger with cuisines from all over the world – Including Norwegian food.

Want more recommendations on things to do in Stavanger, Norway? Leave a comment below! 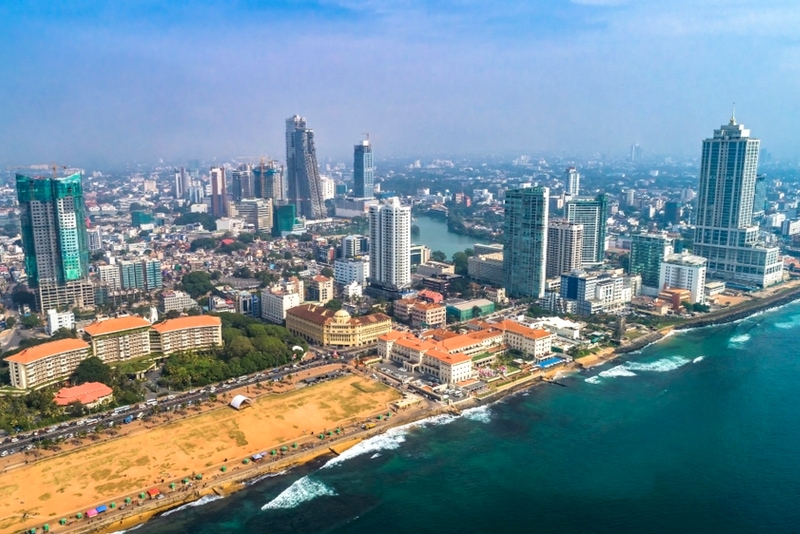 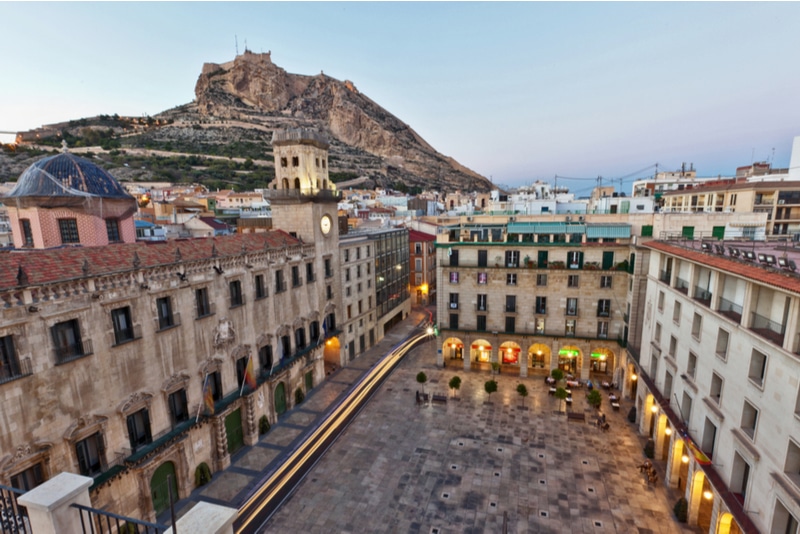