15 Best Things to do in Skopelos (Greece) 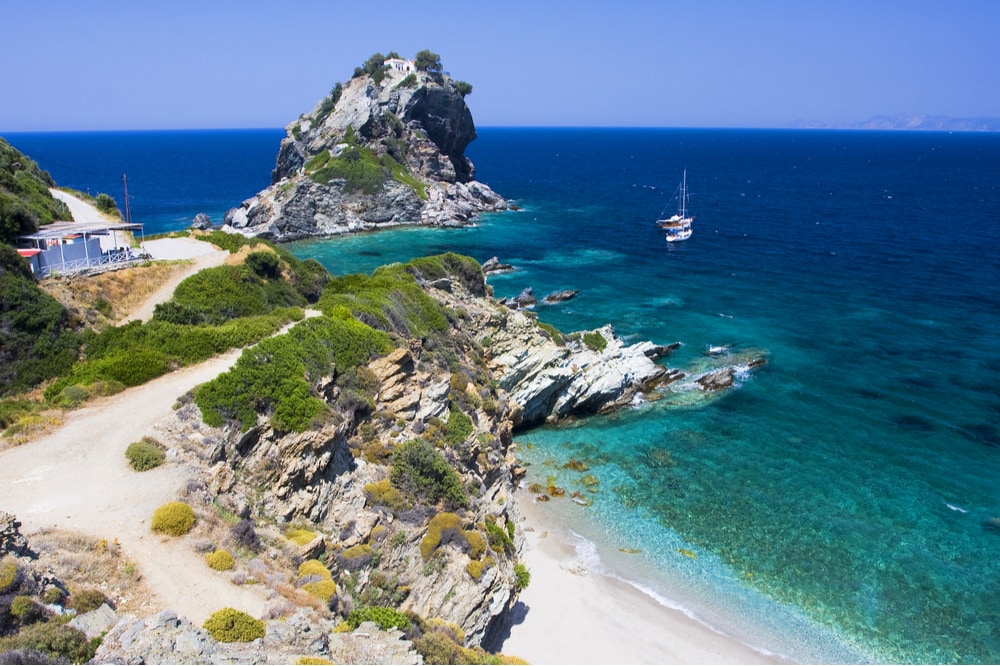 Here’s a list of the 15 best things to do in Skopelos (Greece), along with famous landmarks, museums, and other points of interest.

Skopelos is one of the most beloved Greek Islands, located in the western Aegean Sea. It belongs to the Northern Sporades islands group.

According to an old legend, Skopelos is said to have been founded by Staphylos (Greek for grape), one of the sons of the god Dionysos and the princess Ariadne of Crete.

During Ancient times, it was famous for its wine, and these days, it has especially become famous for being the location where many of the most famous scenes of Mamma Mia were filmed. Skopelos is also one of the greenest islands in this part of Greece.

In this article, I’m sharing some of the best places to visit in Skopelos as well as attractions and beaches that shouldn’t be missed while visiting.

The Agios Ioannis Church is one of the highlights of the island and is definitely one of its must-visits. What makes this church so impressive is its location on a rock high above the surrounding Aegean Sea.

Climbing the staircase towards this Greek orthodox church is one of the most worthwhile exercises you will ever endure as a fantastic view over the rugged surrounding coastline with its marvelous rock formations and lush forests await you.

The beauty of this place is simply breathtaking and for fans of the Mamma Mia movies, this is a must place to visit in Skopelos since it was here that some of the most famous scenes were filmed. 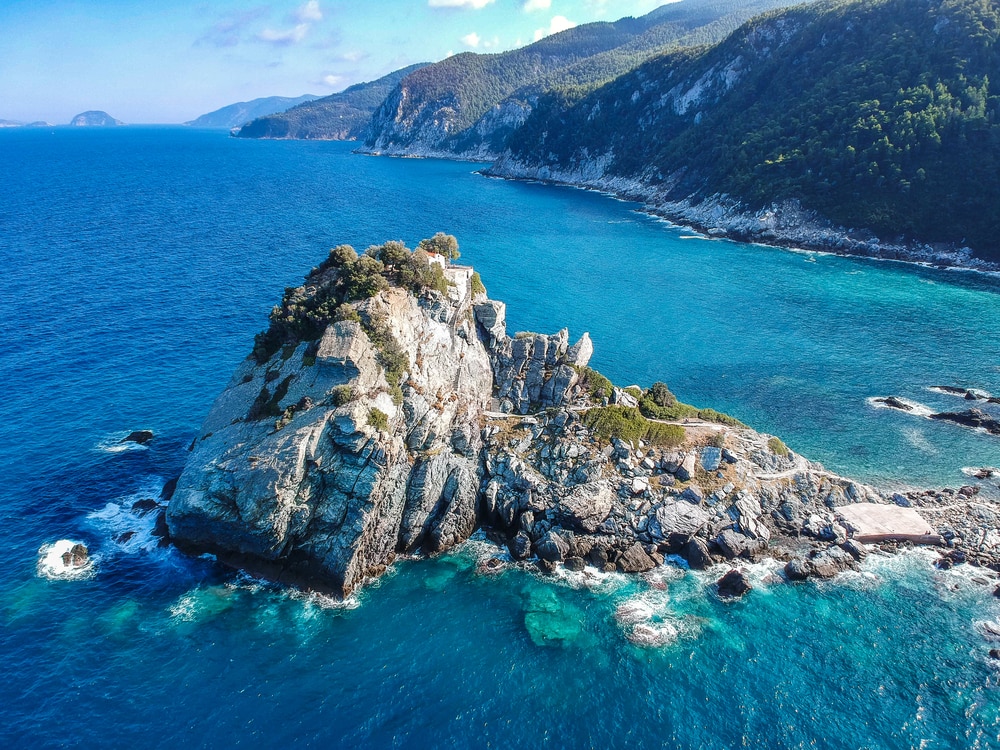 Skopelos Town is the largest town on the island and serves as its capital. It is also home to the island’s main port and offers picturesque streets that are worth exploring.

Most of the houses are built in the traditional Greek style featuring fantastic flower gardens and colorful balconies. One of the highlights of the town is the 13th-century ancient castle sitting on top of a scenic hill overlooking the port.

The castle walls are home to a beautiful 17th-century basilica. But there are also many smaller monasteries in the center of the town which are worth exploring.

It is also from here that you can hop on ferries to other islands nearby, such as Skiathos and Alonissos. 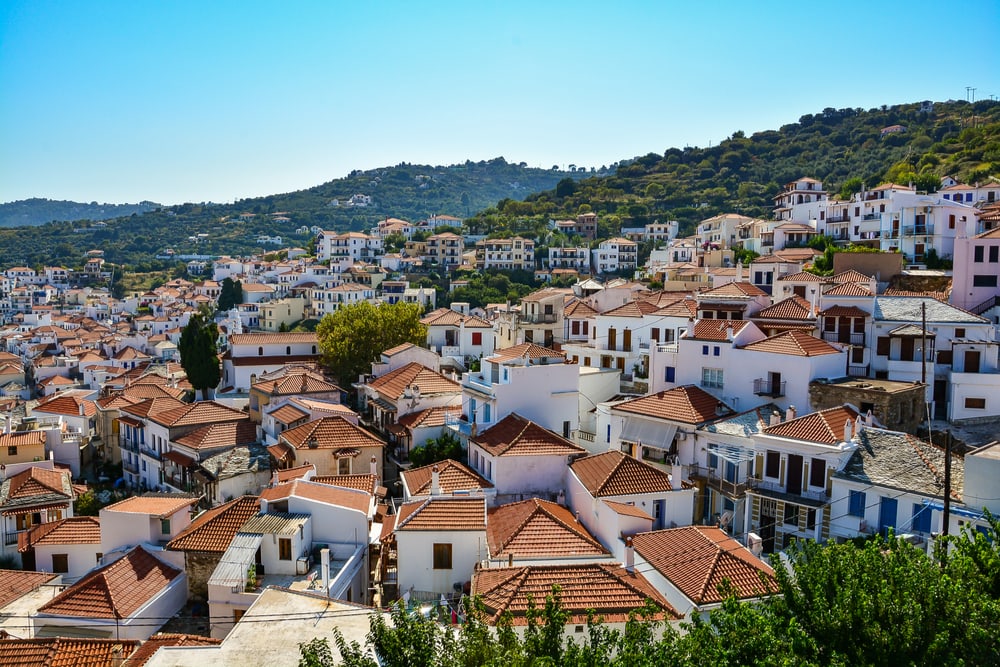 Neo Klima is a lovely town on the western shore of Skopelos. It features fantastic sea views, several great beaches as well as a marina that has become very popular for yachting.

Neo Klima is surrounded by lush forests that allow for some great hiking as many marked trails are leading inland from Neo Klima.

All the amenities like a supermarket, bars, restaurants, and accommodation options can be found here as well making it one of the most pleasant places to stay when coming to Skopelos. 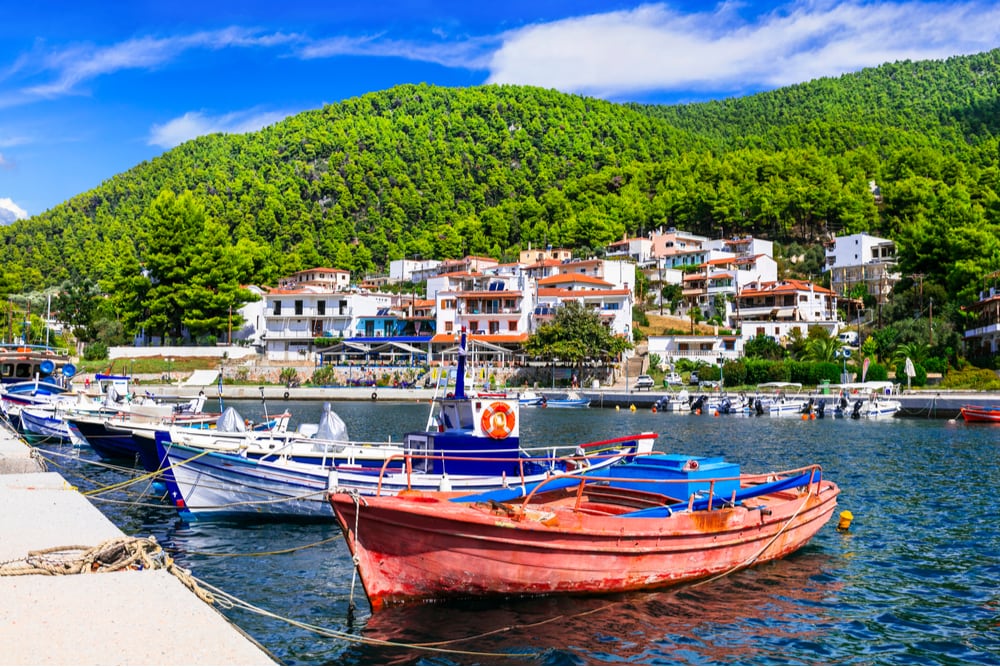 Milia Beach is situated on the northern side of Skopelos and is surrounded by lush pine forests. The beach is one of the island’s most attractive as it offers marvelous watercolors and plenty of scenic viewpoints within its surrounding forests.

Even in the summer months, there is always plenty of space and the beach never gets overly crowded. Many people also come here to dive or snorkel as there are beautiful underwater rock formations just off the beach.

There is also a lovely islet called Dassia right opposite the beach which adds to its impressive scenery. 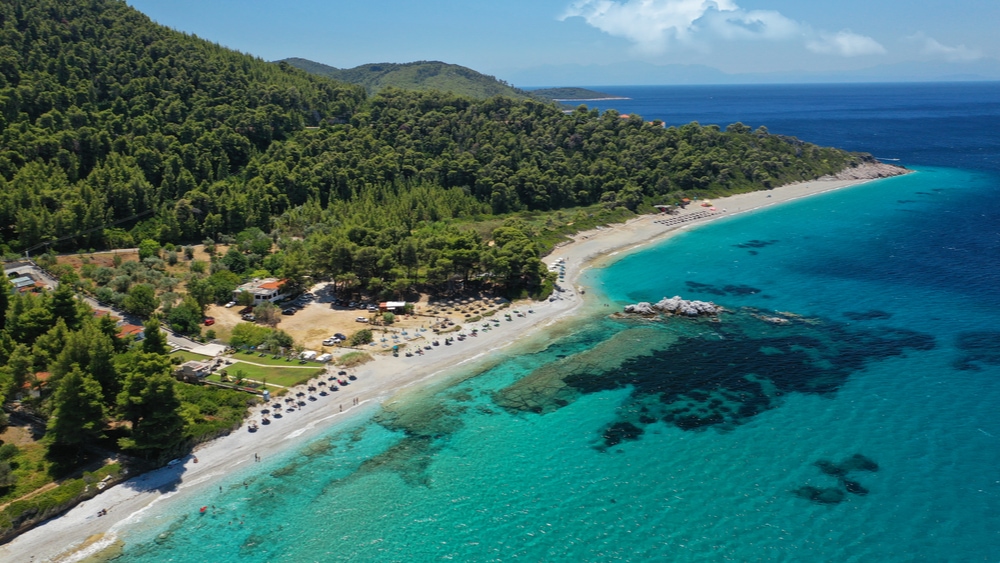 Hovolo Beach is located a few hundred meters south of Neo Klima and is considered amongst the island’s most beautiful. The beach is not very wide as rock formations and pine trees are reaching almost right to the water.

But that is not a bad thing as it gives the beach a more rugged and adventurous atmosphere and thanks to the rocks there are plenty of hidden spots to be found where you can sunbathe in peace.

The cliffs surrounding the beach also offer very scenic panorama views that are great for photographing. This is definitely one of the most beautiful places to visit in Skopelos. 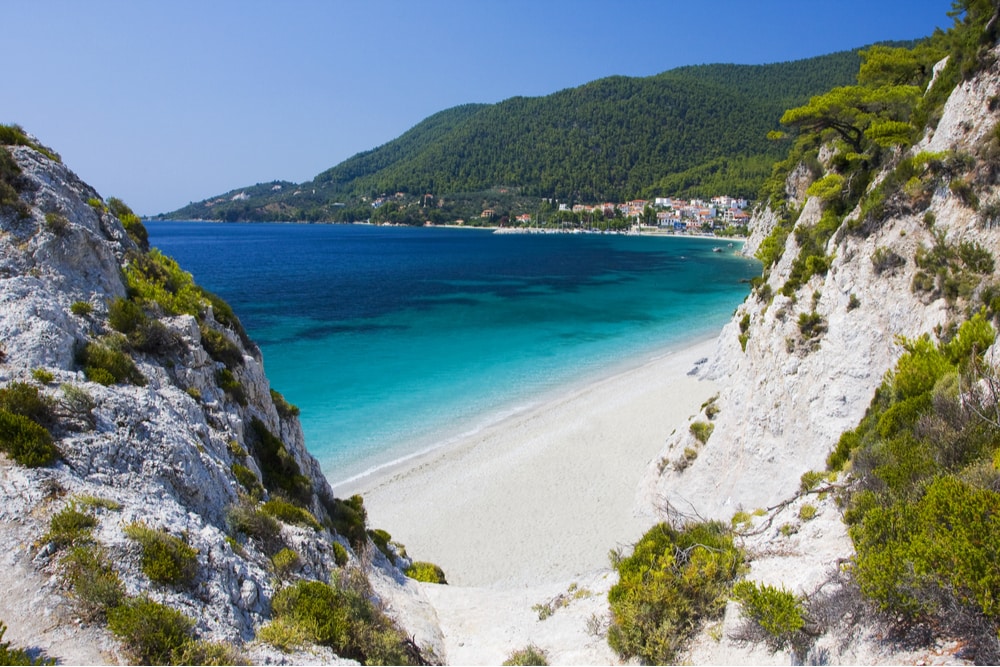 The Monastery of Panagia Evangelistria is built on the slopes of Mount Palouki and can be found around 3,5 km east of Skopelos Town. This monastery is widely regarded as one of the most important Byzantine monuments of the island and dates to the 18th century.

At first sight, the monastery resembles a fortress as it features incredibly thick walls. Don’t miss the beautiful icons found here. Apart from its architectural beauty and the interesting artworks found within its walls, the monastery is also known for the fantastic views it offers towards the Aegean Sea and the town of Skopelos. 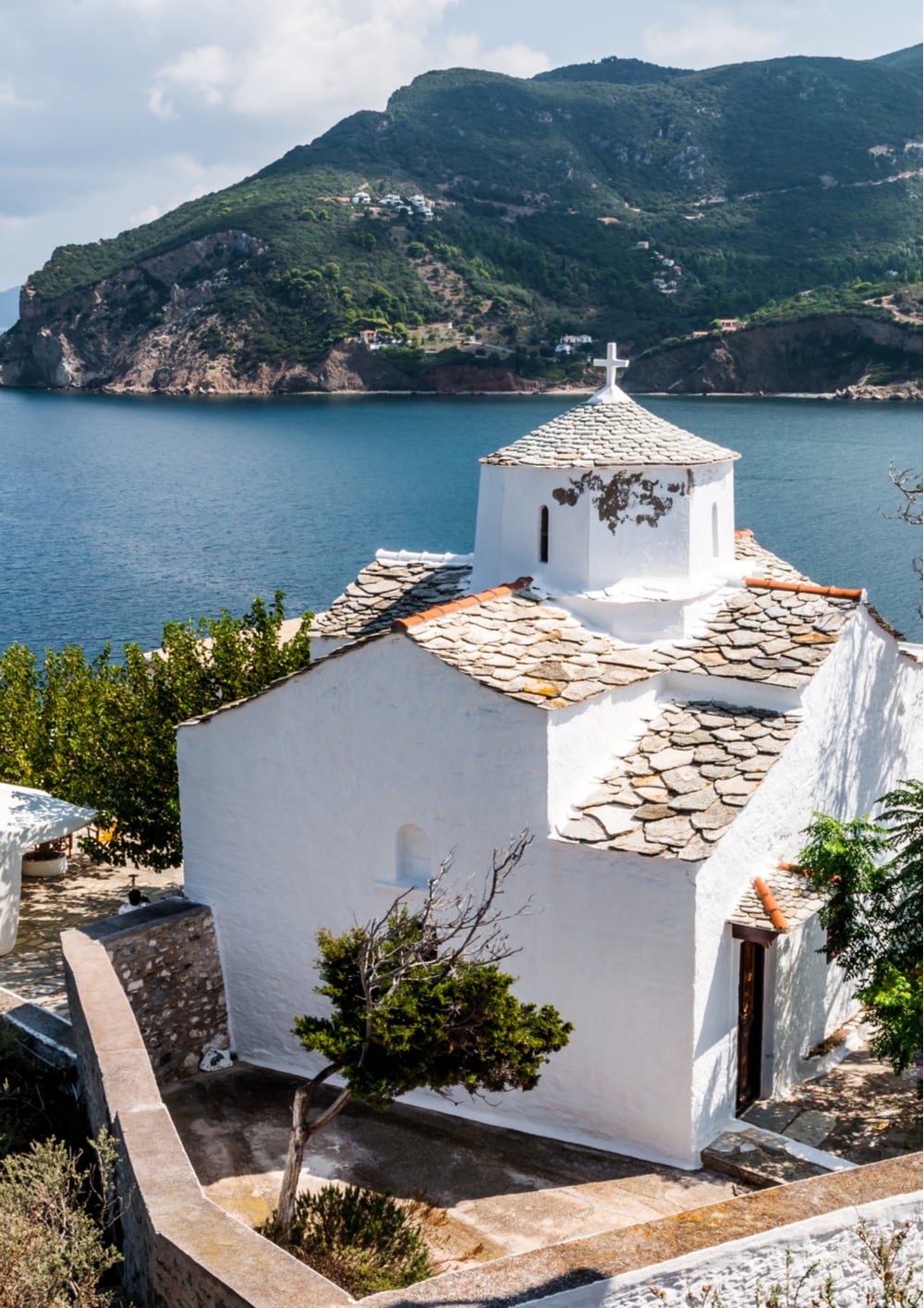 Panormos Beach is a fantastic spot for easy fun and sun at the Aegean Sea. This lovely beach is great for families as it is quite wide and spacious and can easily be accessed.

The turquoise waters here are shallow and calm which makes it even more suitable for young visitors eager to play in the water. Panormos Beach is also very scenic as there are plenty of lush forests and hills as a backdrop.

Sun loungers and umbrellas can be rented and there are also a few bars and restaurants found here that serve Greek food. 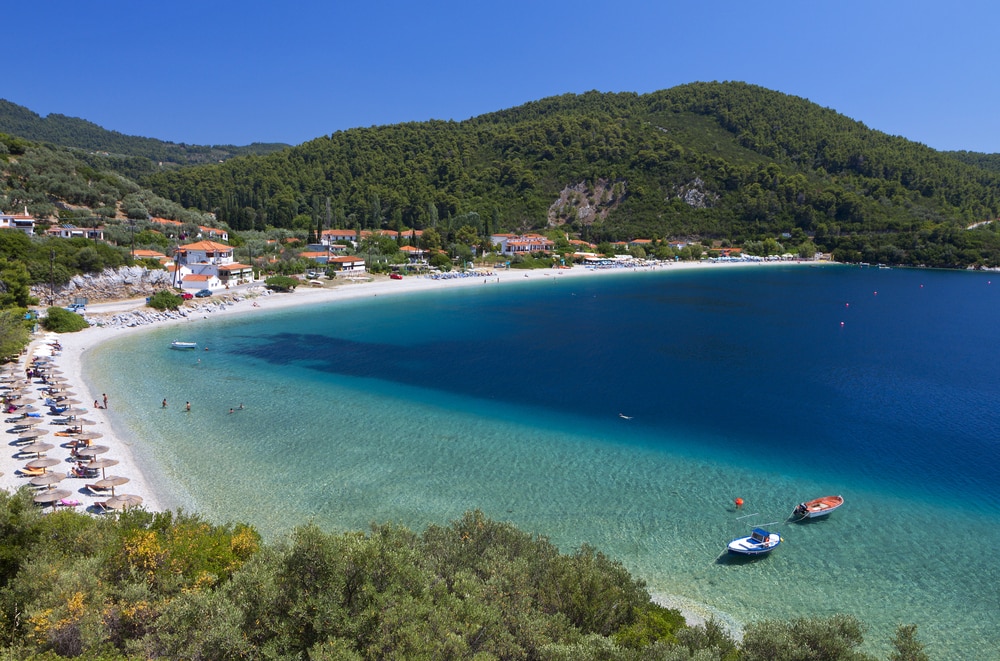 Panagitsa Pyrgos is one of the first buildings you notice when coming to Skopelos by boat. It is located within the walls of the castle and has a fantastic throning position over the harbor.

It can be quite challenging to walk up here but once you are here you will be amazed by the beautiful views over the harbor, the Aegean Sea as well as the town of Skopelos. 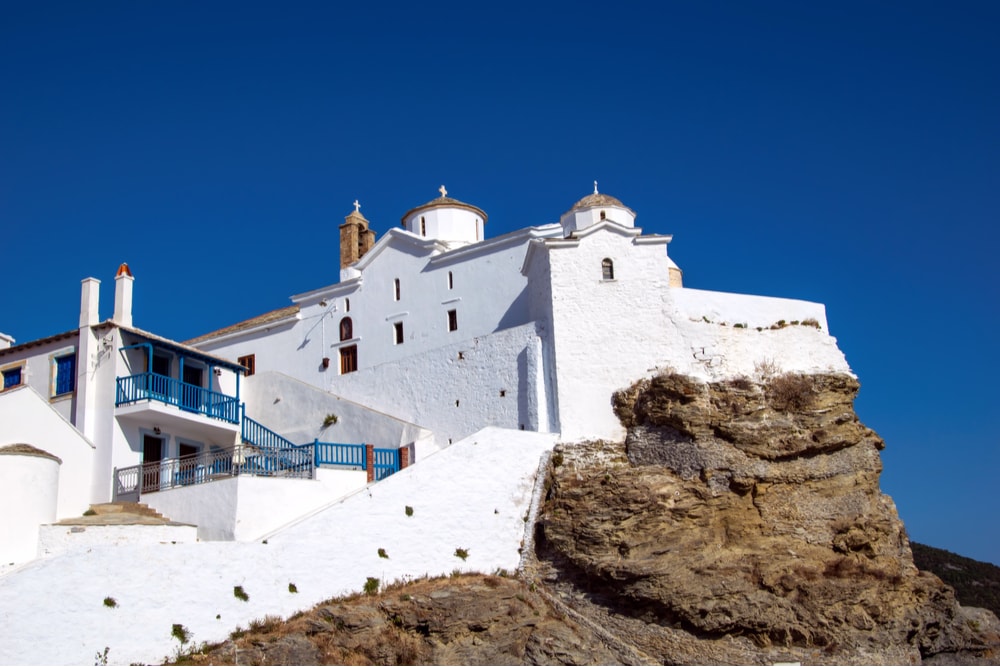 Sendoukia and its pirate graveyard are located in the heart of the island and can definitely be considered a very unique attraction. Barbarossa, a famous pirate, and his crew were trying to plunder the island but got defeated by its local inhabitants.

The remaining corpses were buried here, and there is also a local legend that claims that the buried pirates have turned into ghosts that now protect the 12 chests of gold that are believed to be buried along with the pirates.

Glossa is one of the loveliest villages on the island. It is situated on hilly terrain a few hundred meters away from the sea which gives it a great panorama over its surroundings.

There are many comfortable taverns found here that are very inviting and, due to their often scenic views, serve as great places to spend a couple of relaxed hours with friends or family.

The best way to explore the village is by simply walking along its main streets and enjoying the authentic Greek village atmosphere. 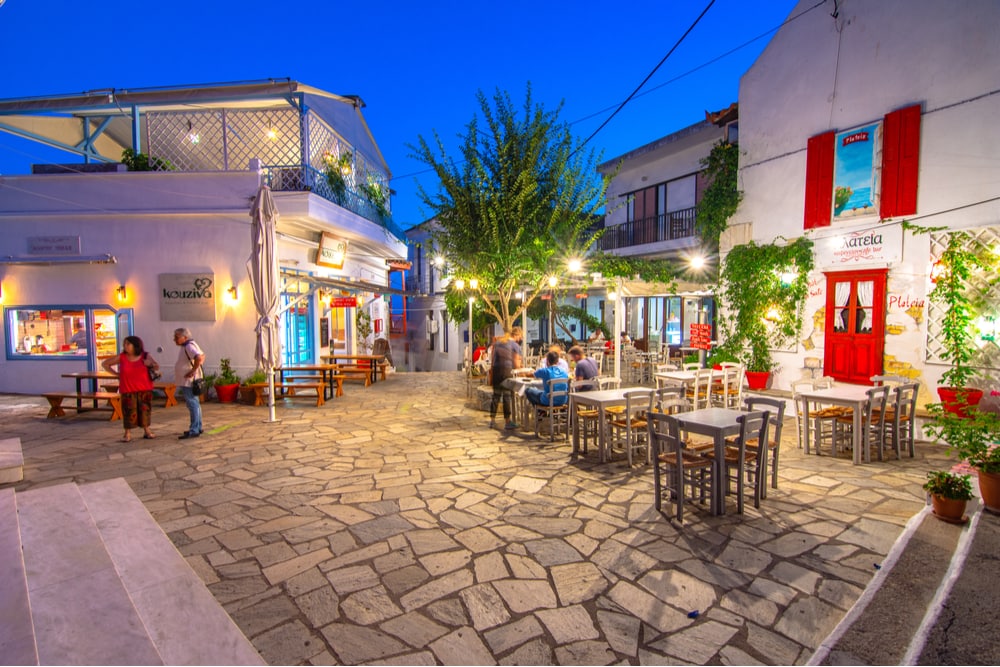 Diving is a very popular activity in Skopelos, attracting thousands of fans of this sport every year. The Skopelos Dive Center is one of the most respected businesses on the island and has two bases, one in Skopelos Town and one in Panormos.

This dive center offers various courses for beginners but also more challenging dives that are catering to more experienced divers.

Agios Riginos is considered one of the most influential residents of Skopelos’ history and served as a bishop for the island. Unfortunately, he was later beheaded as the local ruler of the time (4th century) ruthlessly persecuted followers of Christianity.

To honor Agios Riginos a monastery was built and even though the original structure was destroyed over time, the site remains one of the most important spiritual places on the island.

The current church is quite modern and was built in 1960 in a typical Greek orthodox style. It can be found 4 km south-west of Skopelos Town.

Cape Amarandos is located on Skopelos’ south coast and is a spectacular spot for nature-lovers. It features impressive rock formations and interconnected caves of breathtaking natural beauty.

Coming here on a sunny day is just marvelous as the vibrant hue tones of the ocean, the greenery of the pine forests, and the white rocks are an incredible combination.

Cape Amarandos is also a popular destination for boat tours as the cape is arguably even more beautiful when viewed from the water. It’s also one of the most places to visit in Skopelos to view the sunset. Kastani Beach became famous after being the film set of the movie ”Mamma Mia” and is yet another beautiful site that shouldn’t be missed when coming to Skopelos.

This small stretch of pebble beach is surrounded by lush forests and despite its remoteness offers a beach bar, umbrellas, and sun chairs as well as a comfortable hotel.

Due to its natural beauty, many boat tours lead along the beach and sometimes also stop here so the people on board can go for a swim. That being said, Kastani beach can also be accessed from land as a small road leads almost all the way to the water. 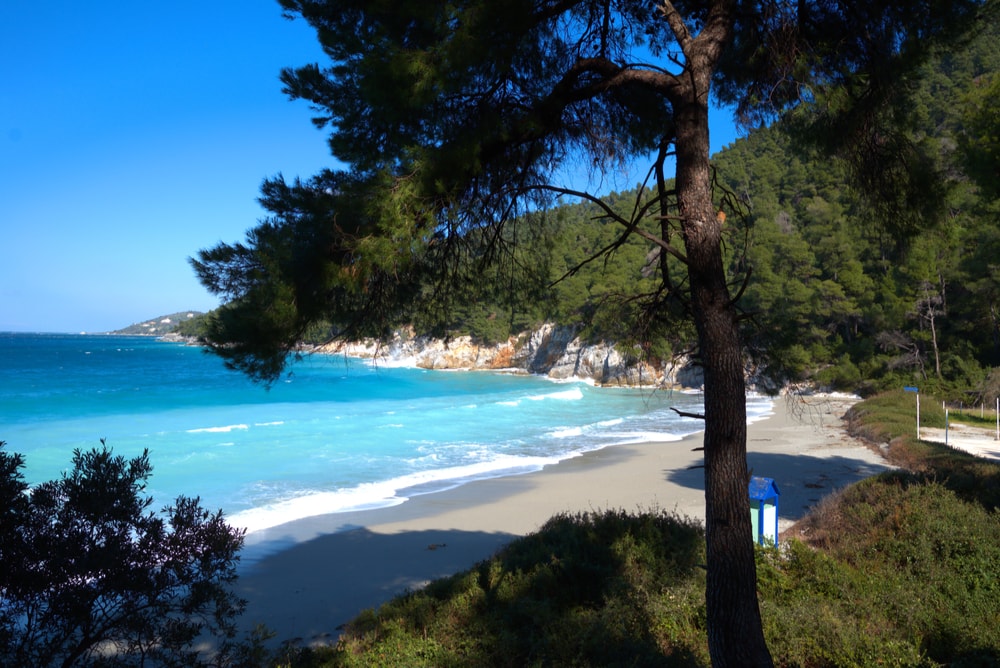 Skopelos Pie, a hearty cheesecake, is likely the dish Skopelos’ cuisine is most known for. It is baked in a spiral-like shape and can be enjoyed during the whole day as it is suitable for all meals.

The goat milk that is used for the cheese comes directly from the island and many of the Skopelos pies on offer here are completely hand-made following old traditions.

The passion and love the local people have for this local snack can really be felt when coming to this island, and you should definitely give it a try.

Want more recommendations on things to do in Skopelos, Greece? Leave a comment below! 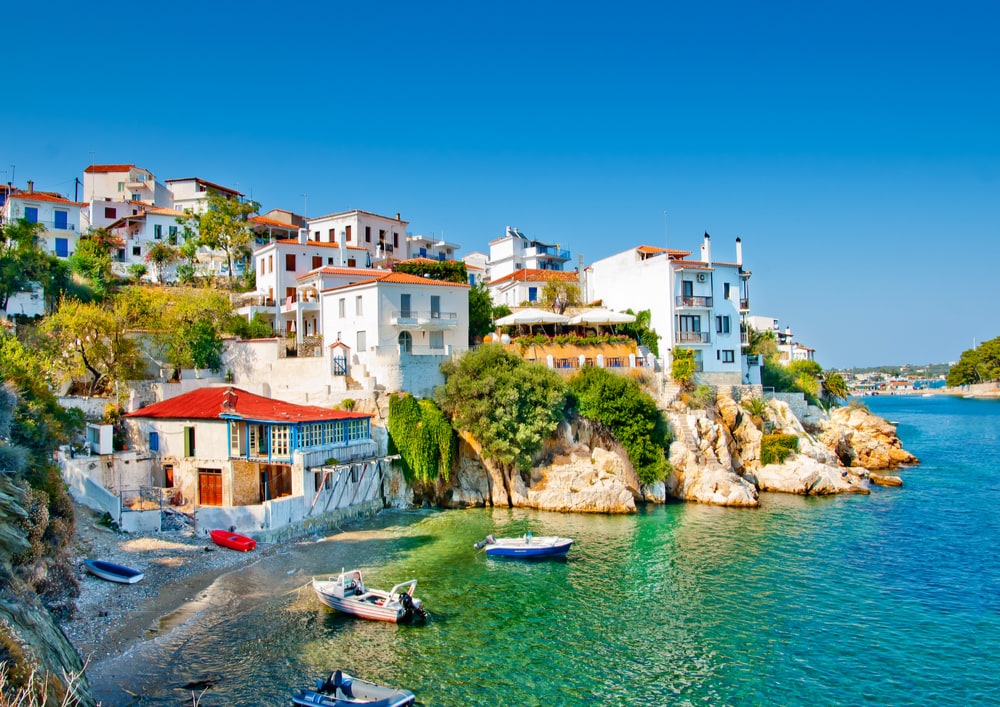 15 Best Things to do in Skiathos (Greece)
← Read Last Post 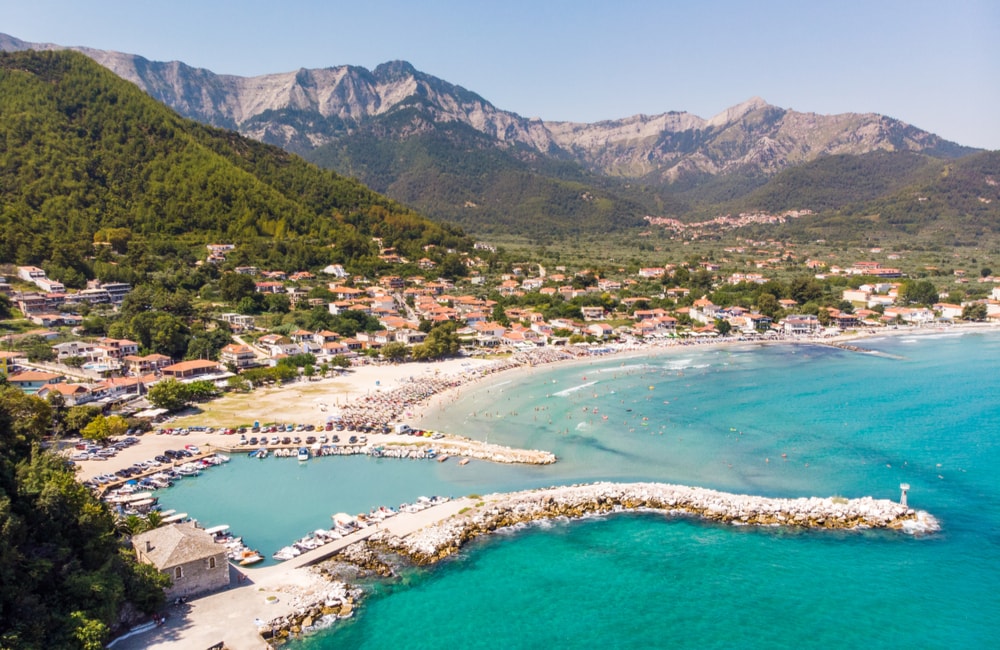