15 Best Things to do in Saint Petersburg (Russia) 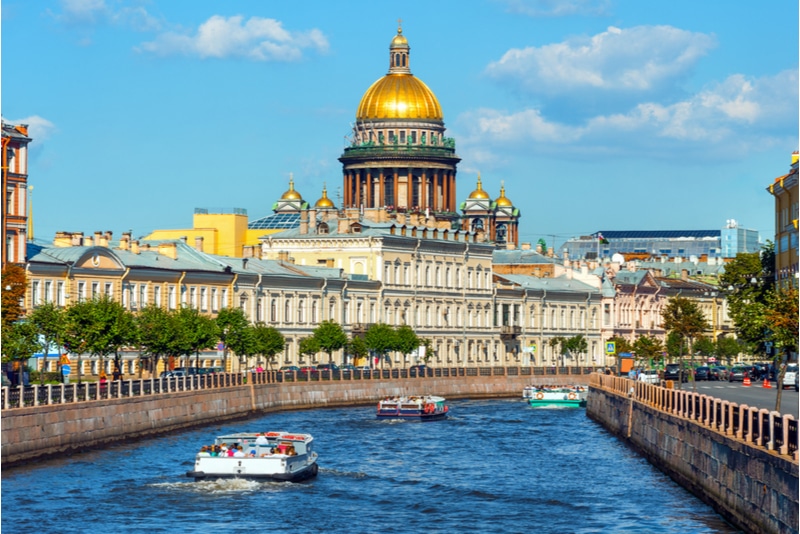 Here’s a list of the 15 best things to do in Saint Petersburg (Russia), along with famous landmarks, museums, and other points of interest.

Church of the Savior on Spilled Blood

The Church of the Savior on Spilled Blood is the most famous church of the city and can be considered Saint Petersburg’s pendant to St. Basil’s Cathedral. It was built in honor of Alexander II. and the ”spilled blood” refers to his assassination.

After an extensive renovation in the years after the Soviet rule, it now awes visitors with its onion domes and beautiful mosaics. It is located right at the Griboedov Canal and adjacent to the Mikhailovsky Garden. 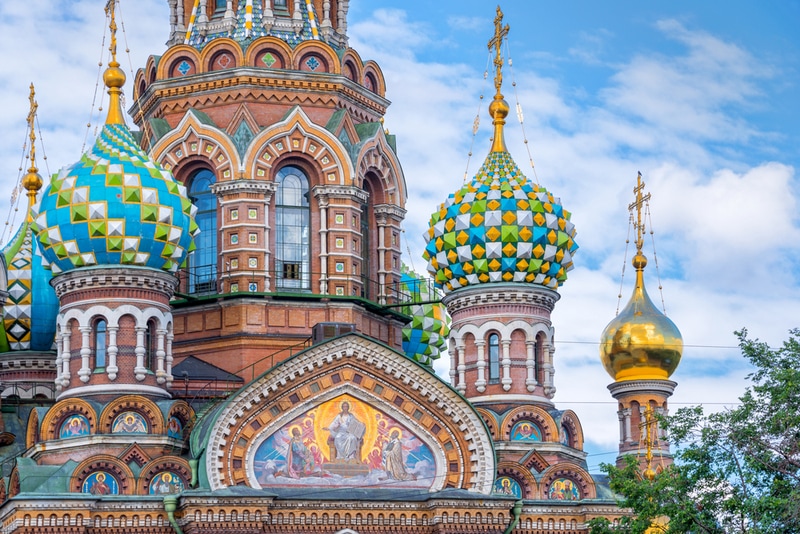 The Mariinsky Theater is a historic opera and ballet venue that opened in 1860. Many of the great masterpieces of Tchaikovsky, Mussorgsky, and Rimsky-Korsakov were played here.

Today the theater is, together with the Bolschoi Theater, Russia’s premier venue for operas, orchestras and ballet. It is known for its great acoustics and luxurious interior. 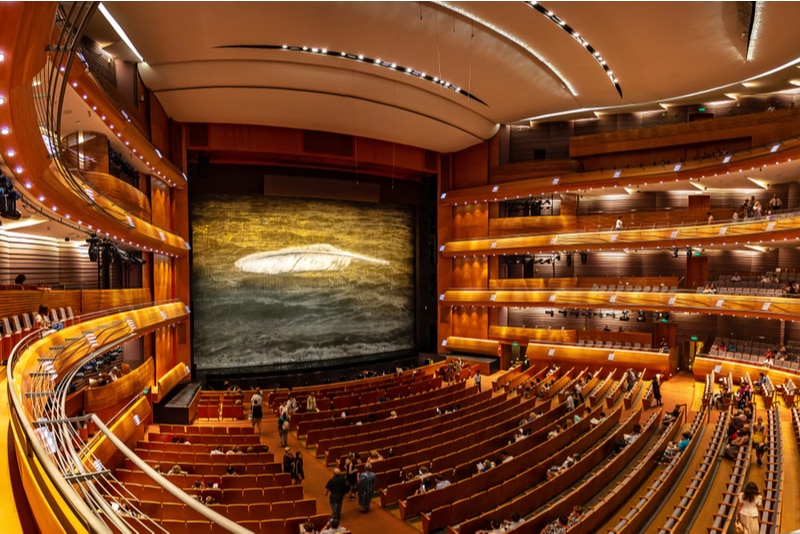 The Hermitage Museum is arguably Saint Petersburg’s most famous sight and should not be missed when visiting the city. The Hermitage is a world-renowned art museum with a collection of over 3 million artworks.

Its collection of paintings is the biggest in the world. The museum consists of five separate buildings: the Winter Palace, the Small Hermitage, the Old Hermitage, the New Hermitage, and the Hermitage Theatre.

The museum offers an array of artworks ranging from the Prehistoric to the modern times and offers highlights of the various eras. 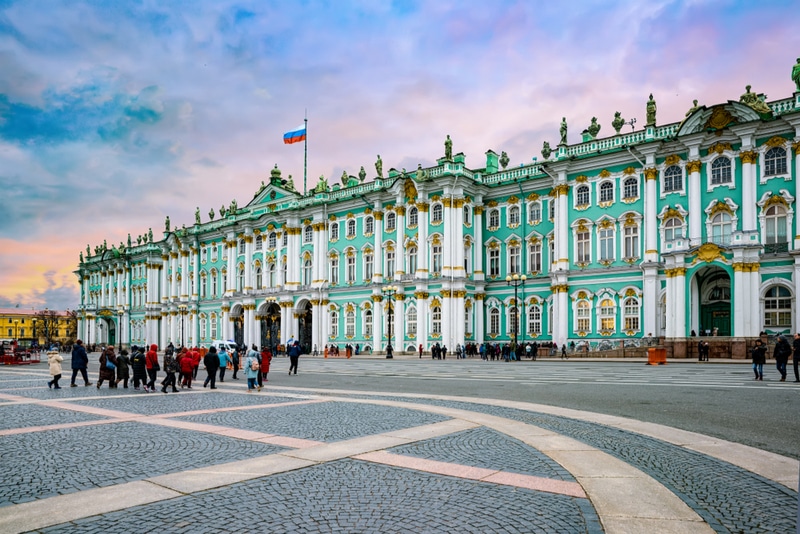 Peterhof palace is located at the shores of the Baltic Sea a few kilometers west of the city center. It consists of a series of palaces that were built to rival the extravagant Versailles in France.

This palace complex is listed as a UNESCO World Heritage Site and has long been one of the main attractions in St. Petersburg. The Petrine Baroque style of architecture pioneered here quickly became a role model for many other buildings of the city.

Today the various palaces and churches serve as a museum and awe its visitors with the splendor and decadence of Tsar Peter the Great. 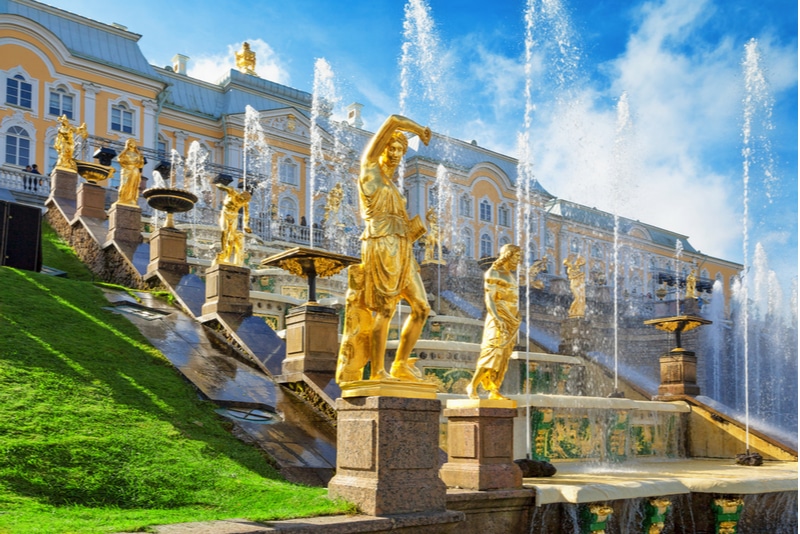 The Fabergé Museum is a recent addition to the city and has only been opened in 2013. It aims at repatriating valuable Russian artifacts and artworks from foreign countries.

The namesake of the museum, Peter Carl Fabergé, is a Russian artist famous for creating Imperial Easter eggs for the Romanovs  (a family of Tsars). Fifteen of these so-called Fabergé eggs are on display at the museum today.

The total collection consists of around 4,000 works of fine art and decorative art. 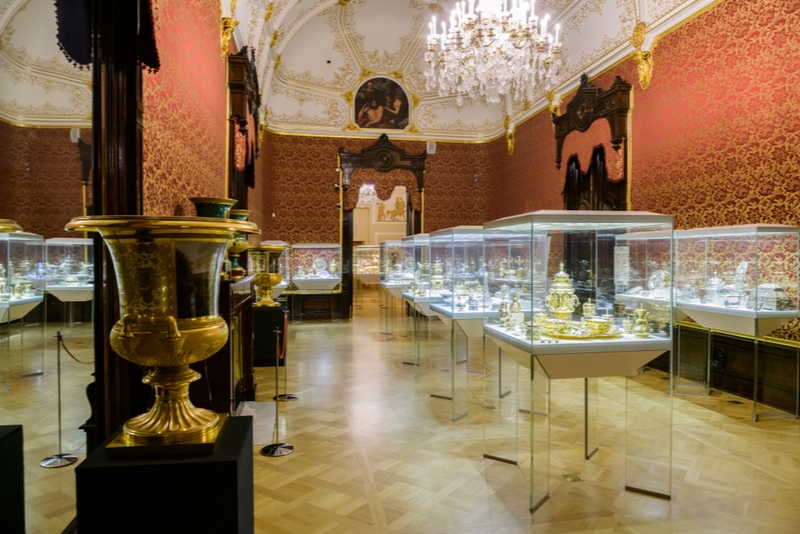 The F. M. Dostoyevsky Literary Memorial Museum is partly located in the former apartment of the author known for his famous works “The Brothers Karamazov”, “The Idiot” and “Crime and Punishment”.

Apart from the memorial apartment, there is also a literary exhibit, the exhibit halls as well as a theatre. Amongst the collections of exhibits are manuscripts of Dostoyevsky, contemporary artworks as well as artifacts of the writer’s life.

The memorial museum of F.M. Dostoyevsky is a great place to learn some of the lesser-known aspects of the author’s life, great for literary fans.

The Catherine Palace is located around 25 km south of the city center and used to serve as the main summer residence of the Tsars. The white structure with its beautifully kept gardens and sculpture-lined paths is absolutely magnificent.

It is one of the best symbols of the decadence of the Russian rulers and how stark the contrast was between the royal families and the simple Russian working class.

This palace was built in the 18th century and consists of one main palace along with several pavilions and many ponds. It’s one of the best places to visit in Saint Petersburg if you’re interested in architecture. 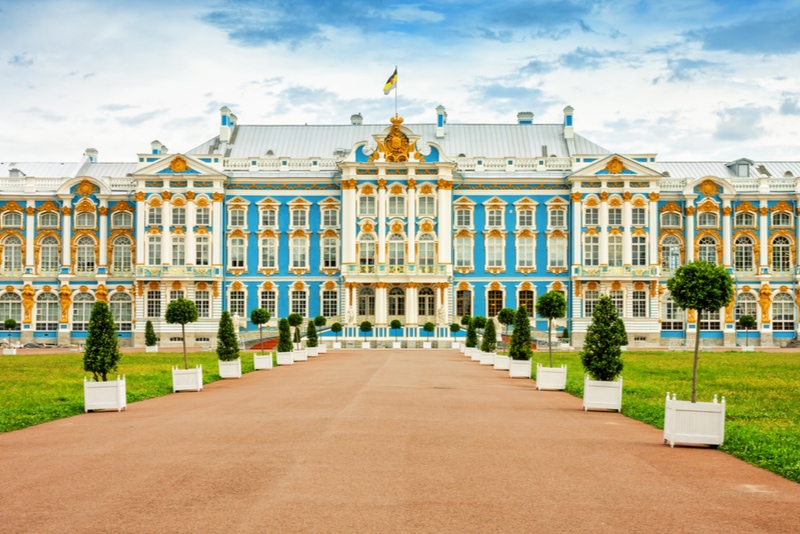 The cruiser Aurora is the oldest commissioned ship of the Russian Navy and looks back on a long history. It was built in 1900 and served in the Pacific during the Russian-Japanese war, as well as the Second World War.

Today the Aurora has been turned into a museum and invites visitors to explore the fascinating areas of the mighty ship. Thanks to the renovation work in the last decades the ship is in pristine condition. 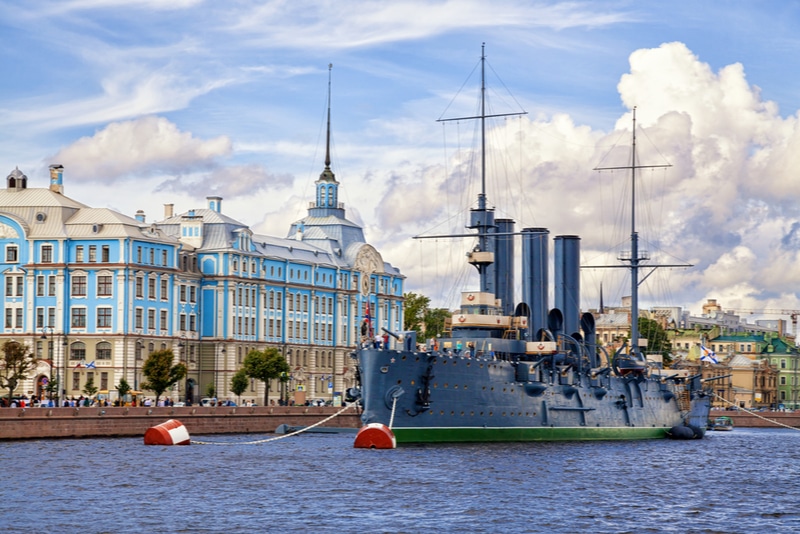 The Naval Cathedral of Saint Nicholas in Kronstadt

Kotlin Island is home to Kronstadt and the Naval Cathedral of Saint Nicholas. It is connected to the mainland by a combination of bridges.

The Naval Cathedral is a great example of the Baroque Orthodox style of architecture and features a number of great Corinthian columns and stucco architraves.

Visiting the island is very much worthwhile not just because of the cathedral but also because of the fantastic views enjoyed from here and the naval fortress Battery Prince Menshikov surrounding it. 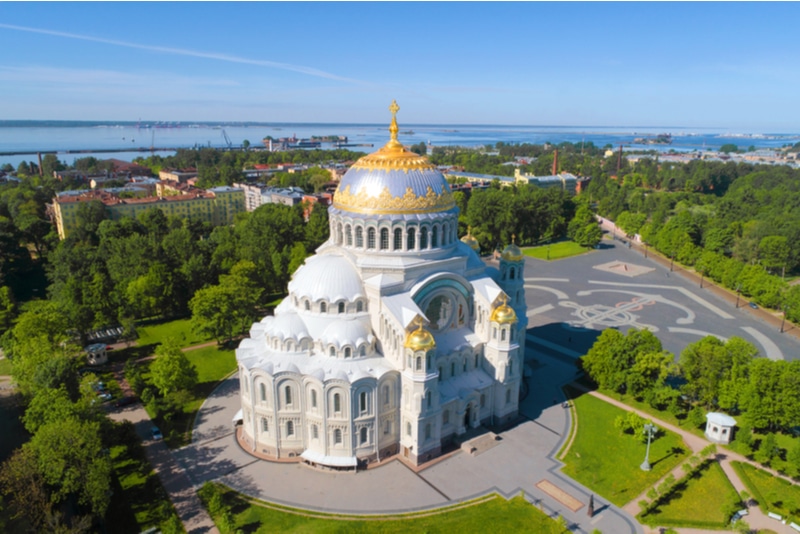 Tsarskoye Selo State Museum is a breathtaking monument impressing its visitors with its great Russian Baroque architecture. Many Russian Tsars have lived here including Catherine I. and Nicholas II.

The museum is considered to have one of the best collections of Classicism in the world and offers one of the grandest interiors of Europe with its world-famous Amber Room and its luxurious décor.

The Grand Maket Russia is a unique institution that made it its goal to make a model layout of Russia in the scale of 1:87. This private museum makes it possible to visit every corner of the world’s biggest country by simply taking a short walk.

Apart from the model layout, there is also a big collection of images to be found here depicting all regions of Russia. The Grand Maket is one of the biggest model layouts in the world and inspires visitors for more travels around this fascinating country.

Visitors will get to learn about fantastic Russian sights they have never heard of before. In my opinion, visiting the Grand Maket is one of the best things to do in Saint Petersburg with kids. 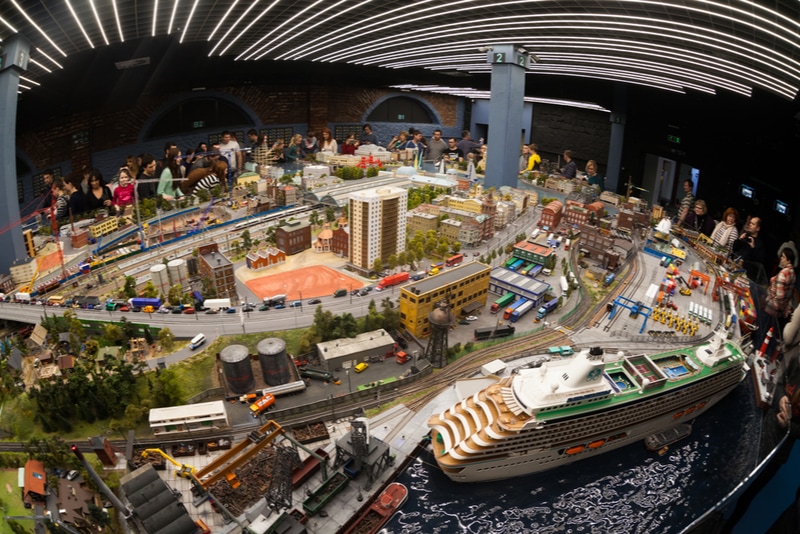 The Russian State Museum looks back on a long history. It is set in the Neoclassical Mikhailovsky Palace and was founded in 1895 by emperor Nicholas II.

Since then it has been home to an ever-increasing collection of artworks sourced from the Hermitage, the Alexander Palace and the Imperial Academy of Arts.  The works range from the 10th to the 21st century and also include interesting Russian icon paintings. 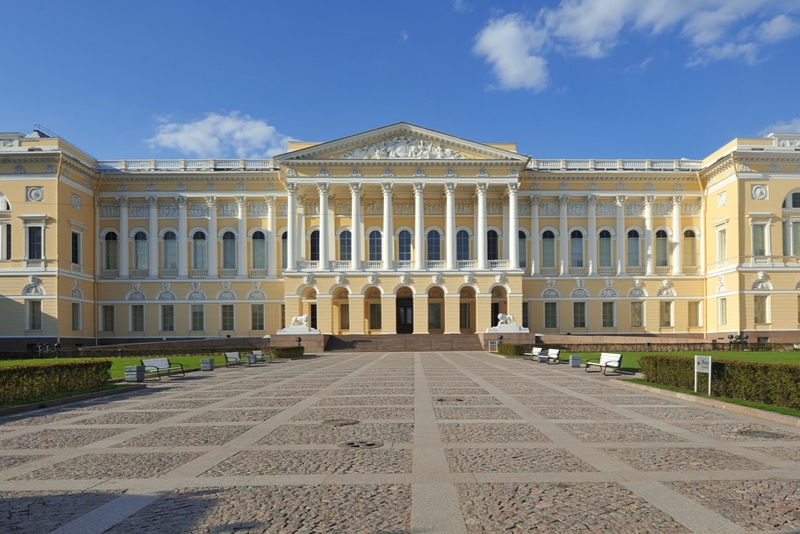 Similar to its counterpart in Moscow, the metro of Saint Petersburg is one of the world’s most beautiful and offers many magnificent stations that are must-visits when coming here.

One of these is Avtovo, it features grand columns and a stunning marble interior themed after the defense of the city during the Second World War.

Another interesting station is the Kirovsky Zavod, which is themed around the Socialist industry and offers many reliefs depicting the former Soviet oil, mining and heavy industries.

And don’t miss the famous station called Pushkinskaya, dedicated to the famous poet Alexander Pushkin. There is a statue of him found here that regularly gets decorated by flowers. 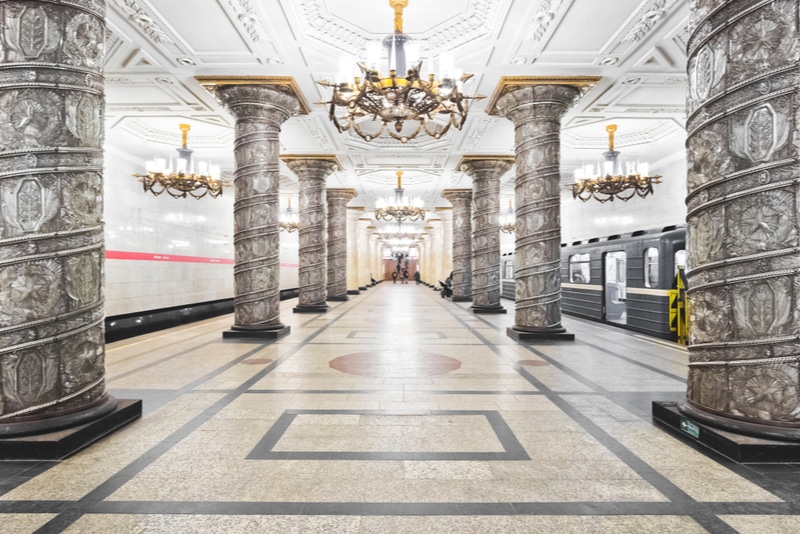 The Summer Garden is one of the most beautiful parks in Saint Petersburg. It is located right next to the Neva River and offers its visitors a fantastic network of well-maintained footpaths, fountains, benches, and everything else you would expect from a noble garden.

The site is also the home of the Summer Palace of Peter the Great and several other interesting buildings such as an elegant tea house. The Summer Garden is the perfect place to relax after going sightseeing around the city. 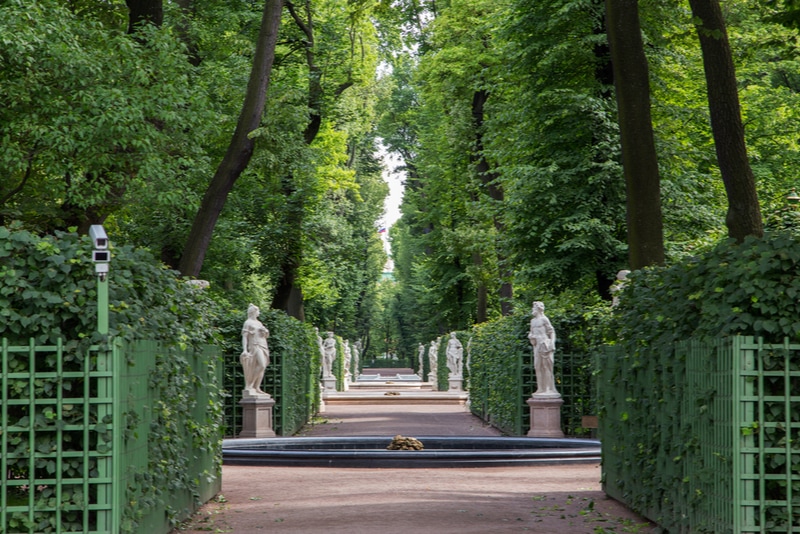 Vodka is Russia’s number one speciality and visiting the Russian Vodka Museum is a great way to learn about the tradition of this alcoholic drink and what cultural role it plays for Russians.

There are also many artifacts found here explaining the traditional production process behind the popular drink. Of course, visitors also get to taste the Vodka here and there is also an adjacent shop where high-quality Vodka can be bought as a souvenir.

Want more recommendations on things to do in Saint Petersburg, Russia? Leave a comment below! 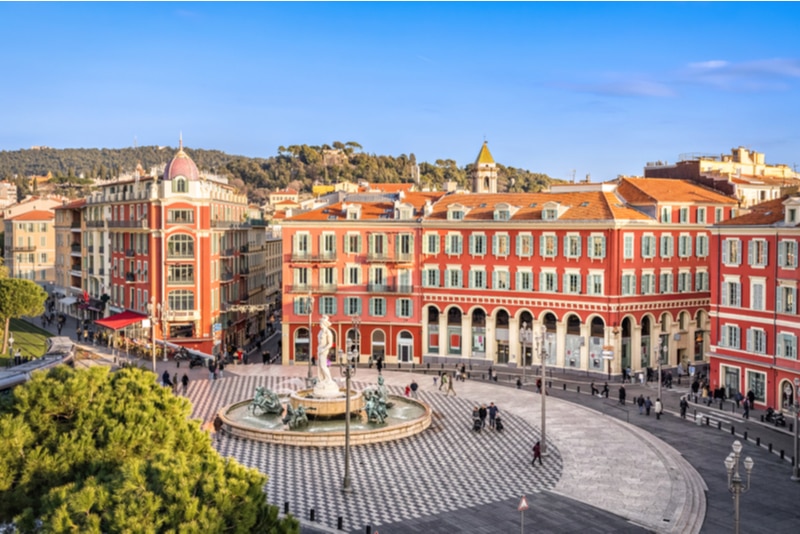 15 Best Things to do in Nice (France)
← Read Last Post 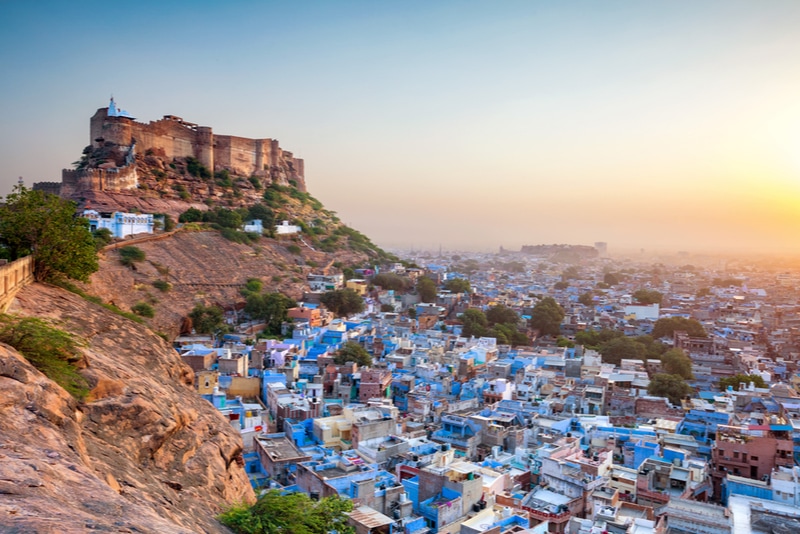