15 Best Things to do in Quebec (Canada) 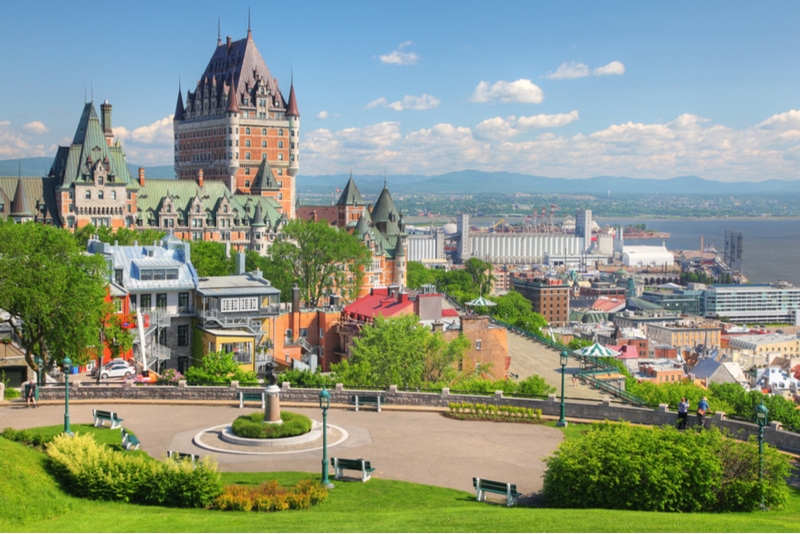 Here’s a list of the 15 best things to do in Quebec (Canada), along with famous landmarks, museums, and other points of interest.

Quebec City is one of the largest cities in Canada with a total population of 733,156 people living within its urban area.

The Fairmont Le Château Frontenac is more than just a hotel; it’s an icon of Quebec City. Perched atop Cape Diamond, it boasts views of the Dufferin Terrace and the St. Lawrence River and is said to be the world’s most photographed hotel.

Many famous people made the Château Frontenac their base during their time in Quebec City. Whether it’s Queen Elizabeth II, Princess Grace of Monaco or Leonardo DiCaprio, both actual royalty and Hollywood royalty alike love this landmark hotel!

The Ramparts and Gates

Discover the remnants of a bygone era as you stroll the rampart that encircles Old Quebec. The fortifications of the Quebec National Historic Site are a great insight into the city’s military past and show how Quebec’s defense system evolved from the 17th to 19th centuries.

It’s the only conserved defense system in North America remaining to this day and allows visitors to the city to travel back to the times of the French and British regimes. Stroll along the rampart walls and learn how they changed the city’s layout and growth. 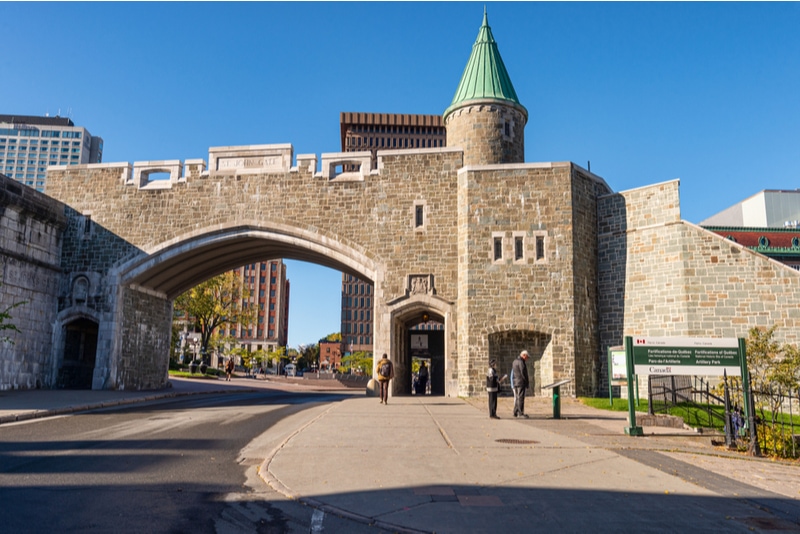 Place Royale is where the city of Quebec was founded in 1608 by Samuel de Champlain. The buildings here are inspired by French and British architecture and are particularly quaint; the cobble-stoned paving of the square also adds to its charm.

It’s also home to North America’s oldest church, the Notre Dame des Victoires Church, as well as pretty patios where you can sit out and enjoy a coffee. When winter falls, and the snow arrives, this area is simply magical and feels like something out of a fairytale. 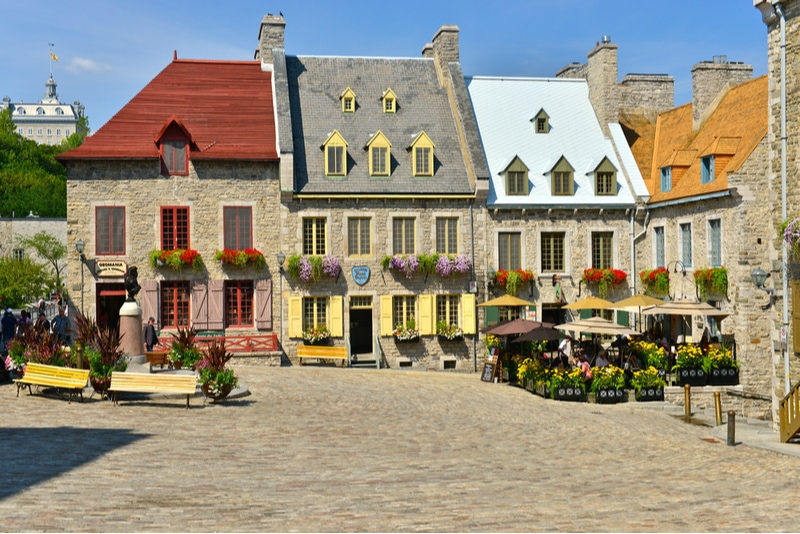 Situated atop Cap Diamant in Old Quebec, the Citadelle de Quebec is a National Historic Site that encompasses over 300 years of history. It’s commonly referred to as the ”Gibraltar of the Americas”, a nod to the Citadelle’s location.

The fortification is laid out in a star-shaped format and has stunning views of the city, the St. Lawrence River, and beyond. Special events take place throughout the year, and guided tours are available.

You can learn more about the history of the Citadelle at the on-site museum.

Named a Canadian National Historic Site thanks to its architectural significance, the Basilica Cathedral Notre-Dame de Québec has witnessed the history of Quebec since 1647. Here, four governors of New France are laid to rest, as well as the bishops of the diocese of Quebec.

Inside, visitors can marvel at various pieces of artwork, and religious artifacts and enjoy the beautifully decorated interior. It’s a place of both celebration and worship; make a prayer or watch the concerts and recitals that take place throughout the year.

Situated alongside the Chateau Frontenac, the Dufferin Terrace is a long wooden sidewalk with beautiful views across the St Lawrence River.

Visitors and locals alike visit the terrace to take a walk, admire the surroundings, take photographs or head to the funicular down to the Lower Town.

It’s best enjoyed in summer when musicians and entertainers take to the terrace to perform, and there’s a distinct buzzing atmosphere. In winter, there’s a giant toboggan run that’s attracted thrill-seekers for over 100 years. 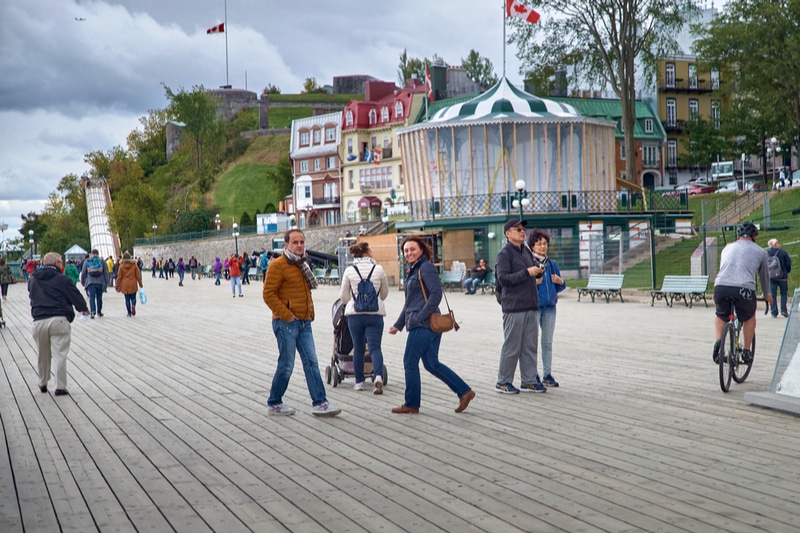 Named a UNESCO World Heritage Site, Old Quebec is steeped in history and is the birthplace of French North America. As you stroll through Old Quebec, you’ll be walking through 400 years of history and are sure to be mesmerized by its beauty.

There’s a wealth of architectural treasures here, from quaint French-inspired cobblestone buildings to lantern-lit narrow alleyways. There’s a distinct charm to this area that fills you with warmth, and the friendly locals only add to your experience. 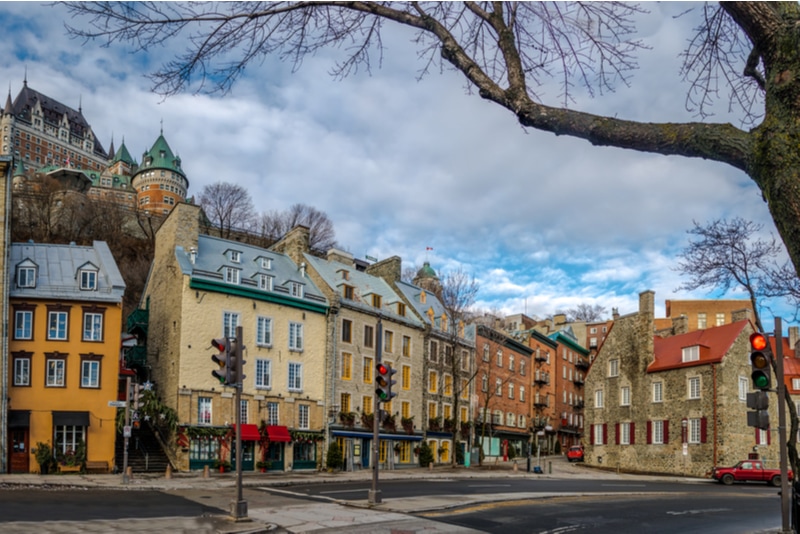 There’s no better way to get to know a city than by tasting its cuisine. Quebecois cuisine is some of the best in Canada and combines the flavors of French and Canadian cuisine. Indulge on a food tour of Old Quebec, dining on tasty treats and traditional dishes as you go.

Your knowledgeable guide will introduce you to the history, culture, and tastes of the district, taking you to the best restaurants and hidden gems where you can try local specialties.

There’s nothing quite as charming as Quebec in the wintertime. Should you want to combine the pleasure of roaming Old Quebec with an outdoor skating adventure, be sure to head to the Patinoire de la Place d’Youville from mid-November through to mid-March.

Admission is free, but you can hire skates upon arrival. This attraction is particularly magical when night falls, and the rink is lit up; take to the ice and try your hand at skating as you’re surrounded by old-world charm and historical buildings.

After long days of exploring all that Quebec has to offer, there’s no better place to relax and unwind than at Strøm Nordic Spa. The incredible spa, situated on the banks of the St.Lawrence River, benefits from remarkable natural surroundings and is a place to reconnect.

The unique spa combines beauty and well-being and offers services that invite you to relax and rejuvenate completely. Try out their thermal experience, enjoy a massage or indulge in aesthetic treatments before dining at the excellent Nord restaurant.

Experience one of the world’s largest winter carnivals, which takes place each year in the heart of stunning Quebec City. Each year, locals and visitors from across the globe flock to the festival to enjoy a plethora of traditional activities, night parades, skating and incredible snow sculptures.

The carnival has been a part of Quebec’s winter celebrations since 1955, and there’s a reason people love it so much. Check out the extreme Ice Canoe Race across the ice-cold waters of the St. Lawrence River as well as the remarkable Bonhomme’s Ice Palace. 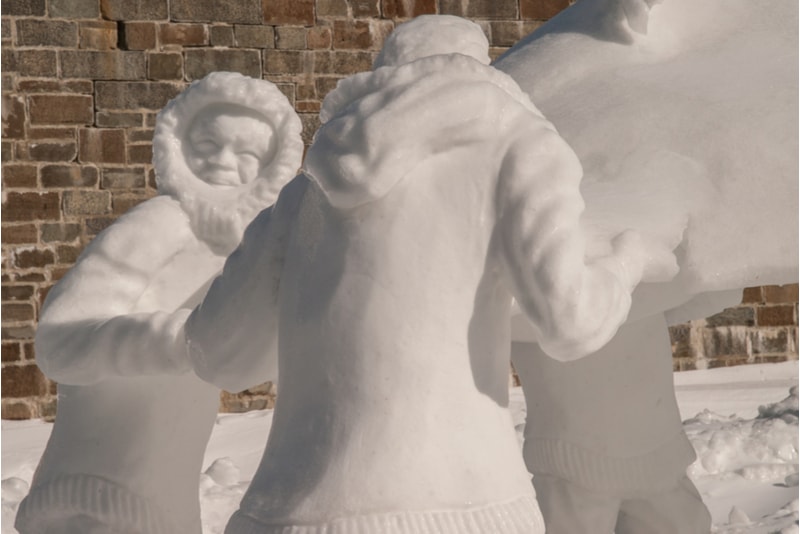 Offering fun for the whole family, the Musée de la Civilisation boasts a fascinating array of entertaining and educational exhibits that depict historical and contemporaneous topics. It’s Quebec City’s most popular museum and offers an interactive approach to learning.

Exhibits here encourage discovery by getting visitors involved; you’ll learn about Quebec culture, history and other exciting topics through family workshops and participatory activities. If you want to delve deeper, be sure to take a guided tour.

Once upon a time, Le Monastère des Augustines was the first hospital built on the continent. Today, however, it’s a health and wellness complex steeped in history and tradition. A stay here isn’t just about relaxing and rejuvenating but about discovering the significance of this building.

Sleep in a modernized room or head to an authentic monastic cell for a more traditional experience. This unique attraction allows you to learn more about raw food, meditation and yoga, while the Augustine Museum & Heritage Centre boasts over 40,000 artefacts depicting the monastery’s history.

The Québec-Lévis is just under a kilometer long and connects the north and south shores of the St. Lawrence River. Each day, hundreds of people make the ferry crossing between Quebec City and Levis, but it’s not just a form of transportation – it’s a fun and affordable attraction.

The best part about the Québec-Lévis ferry crossing is that it offers spectacular views; by day, see Old Quebec’s beautiful architecture and the Château Frontenac perched high on the Cap Diamant. At night, you’ll get to see the city lights reflect off the water.

At a height of 83 meters, Montmorency Falls is actually taller than Niagara Falls. Located in the Parc de la Chute-Montmorency, just a 15-minute drive from Old Quebec, they’re falls are just as spectacular to witness in summer as they are in the winter.

On your visit, choose to take the cable car to the clifftop and admire the falls from a unique viewpoint. If you’re feeling more adventurous, you can walk out across a suspended bridge to the belvedere; you’ll feel the rush of the river as the mighty river thunders past you. 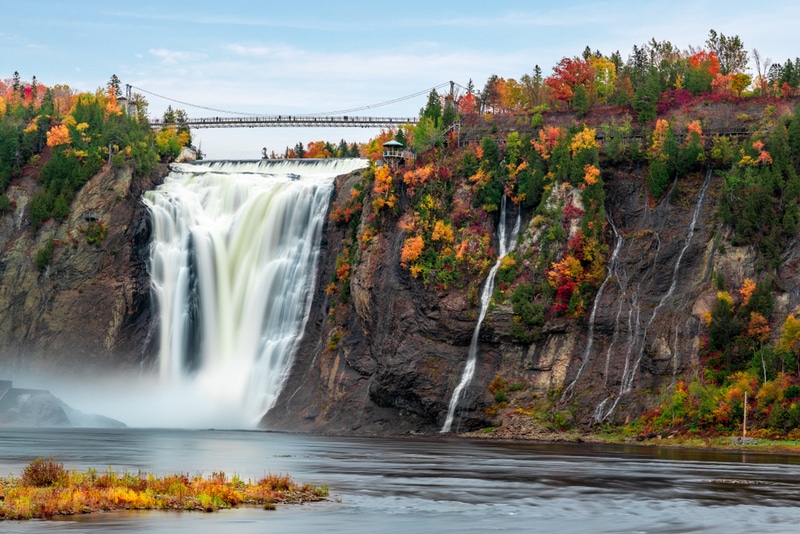 Want more recommendations on things to do in Quebec city in Canada? Leave a comment below! 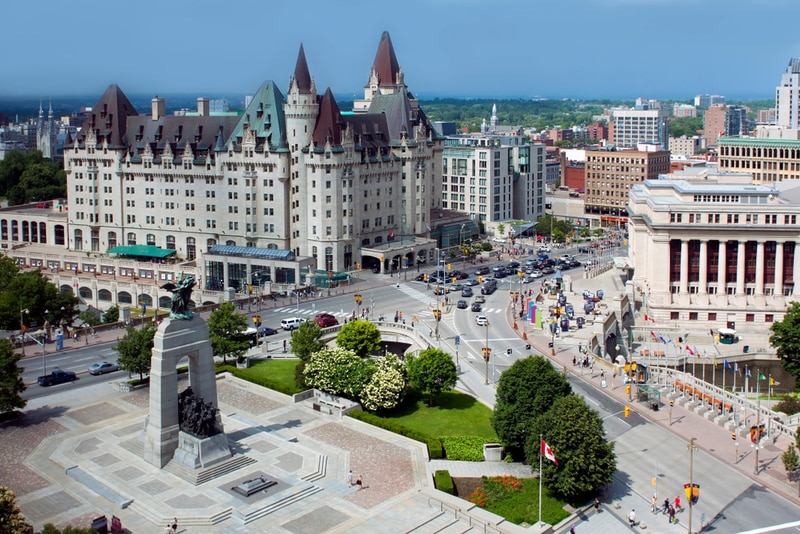 15 Best Things to do in Ottawa (Canada)
← Read Last Post 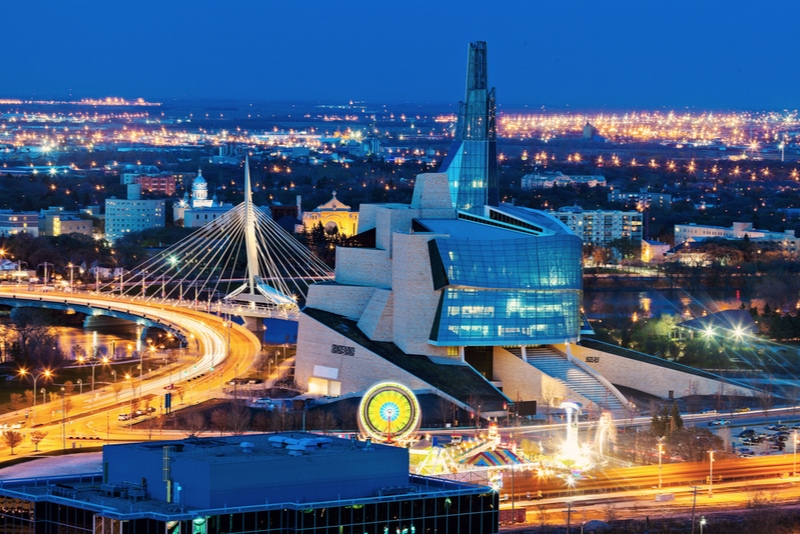