15 Best Things to do in Kefalonia (Greece) Here’s a list of the 15 best things to do in Kefalonia (Greece), along with famous landmarks, museums, and other points of interest.

Kefalonia, also known as Cephalonia or Κεφαλληνία in Greek is the largest of the Ionian islands. It’s a Greek island that is rich in history that served as the center of the Byzantine theme of Cephallenia during the Middle Ages, and later as part of the County palatine of Kephalonia and Zakynthos.

In 1479, it was conquered by the Ottomans, but the Turkish rule didn’t last for long as the island was conquered by a Spanish-Venetian army. Since then, it has been under both French and British rule before it once again came under Greek rule in the 1800s.

Thanks to this rich history, Cephalonia is a haven for archaeologists, and findings dating back as far as 40,000 years BP (Before Present) have been found on the island. The most important findings date back to the Mycenaean era, from 1500-1100 BC.

As a visitor, Cephalonia offers history and unspoiled nature along with beautiful beaches and charming villages with traditional architecture. Myrtos Beach and the Melissani Cave are both places that are famous and listed as some of the most beautiful places in the world.

The Petani Beach is surrounded by white rocks and is called ”The small brother of Myrtos” due to its fantastically clear water. The green hills of the surrounding countryside are another remarkable feature of the beach.

There are plenty of places where you can rent a sundeck and a beach umbrella and unwind in the sand. The water here is quite wavy and not ideally suited for small children. The beach was awarded the blue flag for its cleanliness and environmental protection. 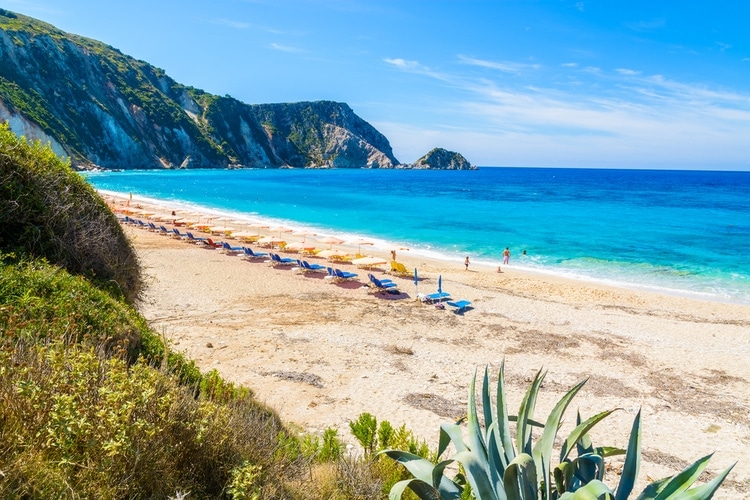 The charming little village of Assos is a great destination and shouldn’t be missed. The architecture of the village resembles the traditional Greek way of living. There are plenty of colorful houses to be found in the hillside alleys.

The main attractions of the village, however, are the sea and the beautiful hills. On the way to the village, you will drive along fantastic cypress groves. Many great viewing spots can also be found along the roads. Don’t hesitate to stop and take pictures. 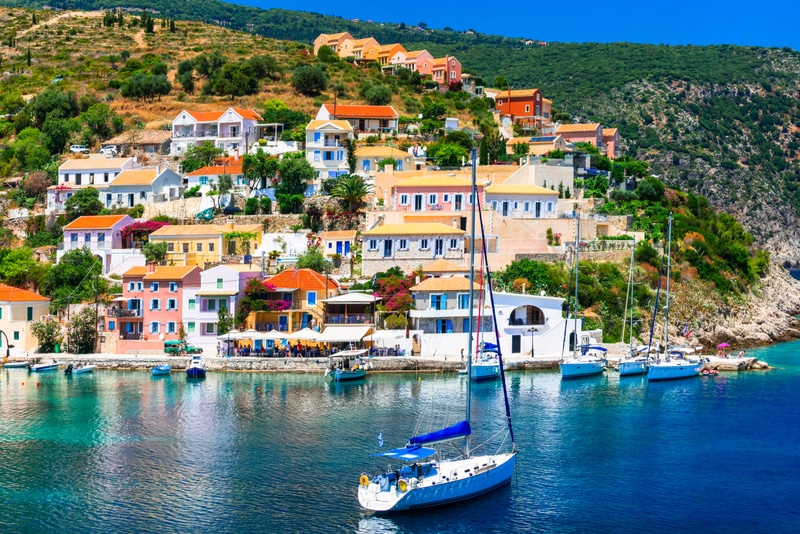 The water is remarkably bright and turquoise and the many huge rocks that are scattered in the area offer fantastic views. Not only is the beach very secluded due to the huge cliffs that surround it.

But it is also heavily protected by local laws and no hotels are allowed to be built in the area. This means that the nature around the beach is completely untouched and all the visitors that come here do so on day trips. 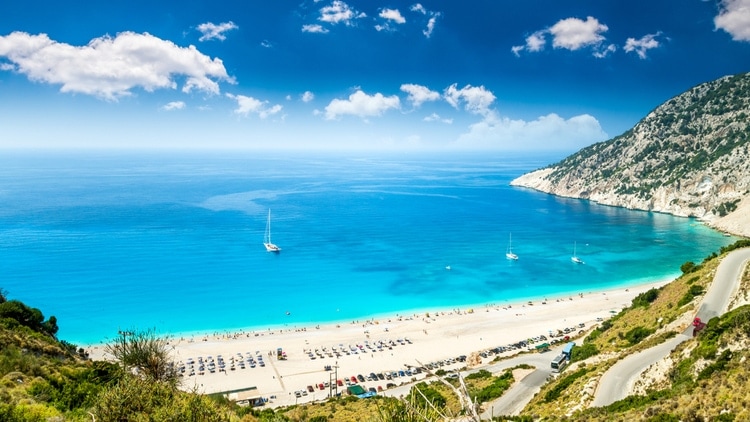 The most important religious center of the island is the Monastery of Agios Gerasimus. Twice a year thousands of worshipers gather here to celebrate Saint Gerasimos, the protector saint of Kefalonia.

The tomb of the saint can be found on this property and shouldn’t be missed. The relics of the saint are saved in a reliquary above the tomb. 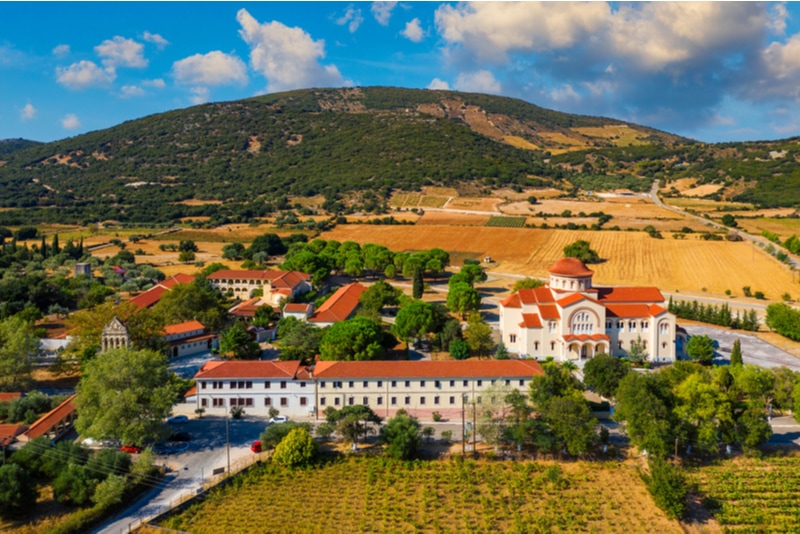 The Melissani Cave, sometimes also called Melissani Lake, is surrounded by forests and mountain slopes and can be accessed by participating in a boat tour.

The limestone cave is a natural marvel and the combination of beautiful turquoise water and sunlight is fantastic and a real experience. It comes as no surprise that the cave is one of the top tourist attractions of the island. 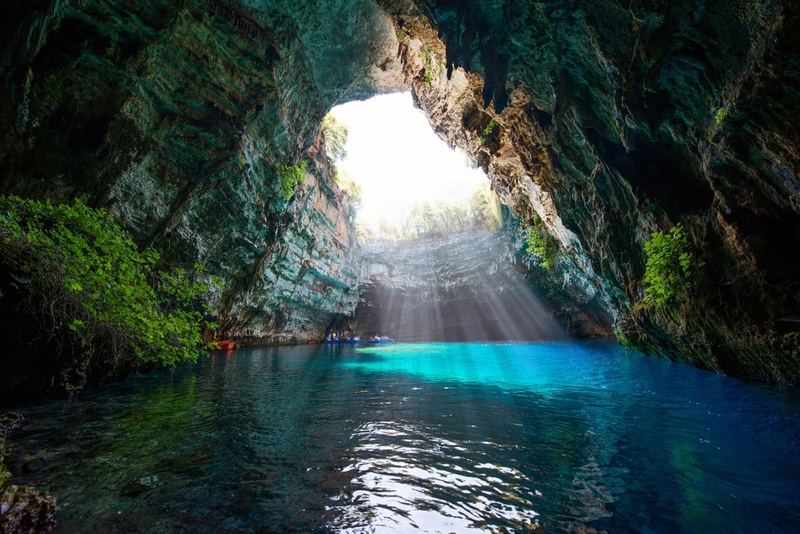 Ithaka is a small island that is located around 2 km off the shores of Kefalonia. Making a day trip to Ithaka is one of the most popular things to do in Kefalonia.

Ithaka is home to several beautiful bays, beaches, and villages and is generally a more tranquil place than its bigger brother Kefalonia. Many tourists spend the day boating around the island and enjoying the lush hills and turquoise waters of the Ionian Sea. 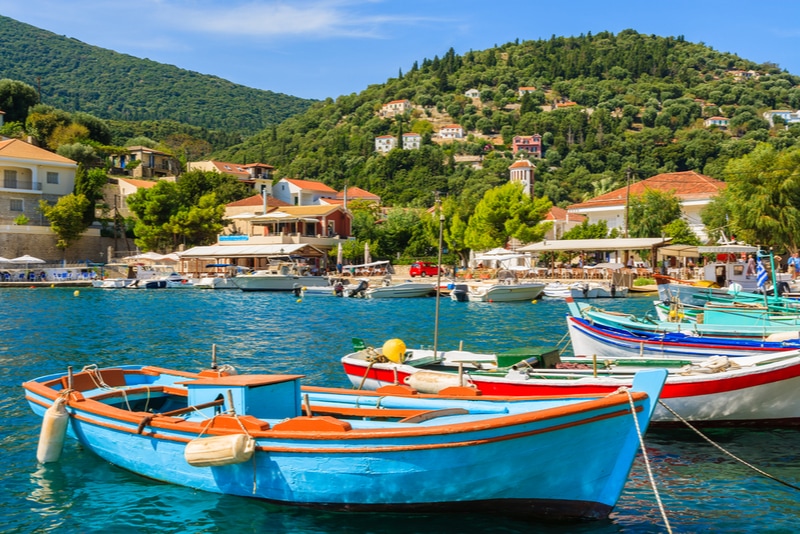 The Mount Ainos National Park is home to Megas Soros, a peak reaching 1628 m. The defining features of the park are its fir trees (Abies Cephalonica) who dominate the landscape and act as a namesake for the mountain.

The fir groves give the area its unique landscape. There are also many semi-wild horses in this wild area. They can often be met at the southeastern side of the mountain.

This national park remains mostly undeveloped with pristine nature. Some agriculture can be found in the area, especially vineyards, but other than that, the area is largely uninhabited. 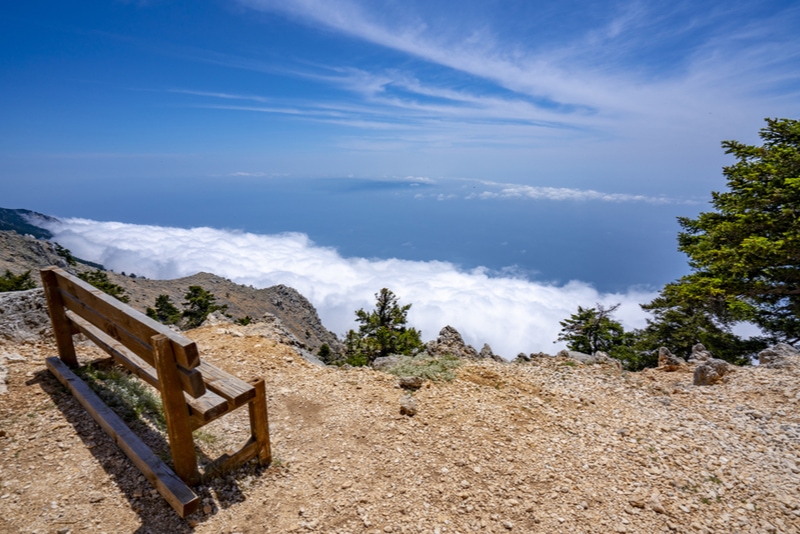 Antisamos Beach has been awarded blue flag status for its cleanliness and is ranked as one of the best beaches of Kefalonia. The beach is especially suitable for families as the water is very shallow and calm.

There are some vendors renting out sundecks, but if desired privacy and space can also be found at Antisamos Beach. Snorkeling and diving are possible here.

The climb to the Agrillion monastery is well worth it for the amazing views that can be had from the top of the hill that is home to the monastery. 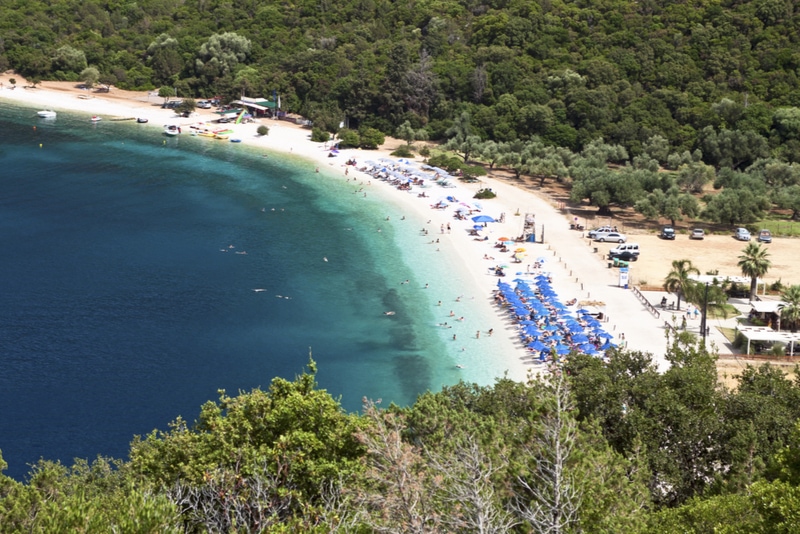 Fiskardo is a beautiful little village in the north of Kefalonia. There is a small port with some fishing boats here, as well as many lovely restaurants.

Even though Fiskardo is a humble village today it was already an established village in the 5th century BC. In recent years, a perfectly preserved graveyard from the Roman era was discovered.

Archaeologists found a wealth of historic artifacts here. The Fiskardo Bay has been declared an area of great natural beauty because of its dense forests and untouched landscape. 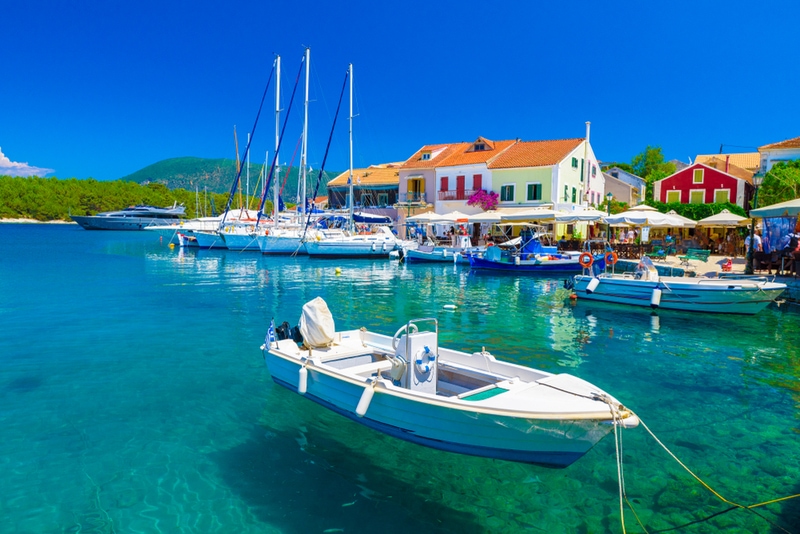 Many sea turtles have made the area of the Koutavos Lagoon, located near the bay of Argostoli, their home. What is particularly interesting is that each morning the entire turtle population comes to the harbor of Argostoli.

This is largely due to the fishermen clearing out their nets after delivering their freshly caught fish to Argostoli. This interesting behavior has become well-known in the area and has now become a tourist attraction. 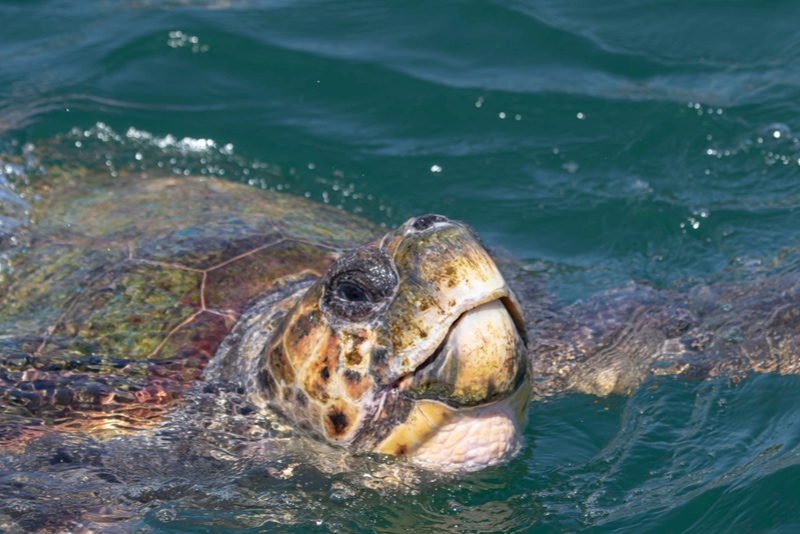 The small port city of Sami is one of the best places to spend your holiday in Kefalonia. Sami is located in the east of the island and is a perfect steppingstone to visit many fantastic sights like Myrtos Beach or the Drogarati Cave.

The area around the harbor is a popular area for locals and foreigners alike and features many restaurants, cafes, and bars. Don’t miss out on trying Robola (a local wine) while sitting in one of the charming restaurants during the evening.

Sami’s small souvenir shops are also worth exploring, there is no better place to buy some memorabilia or little gifts to bring home for family and friends. 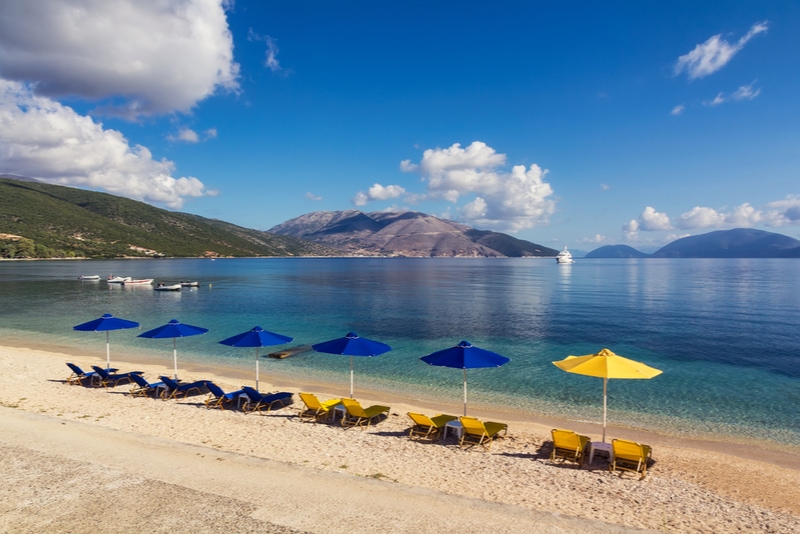 The Castle of Agios Georgios was built in the Late Byzantine period between 1204-1453 and acted as one of the most significant fortifications of Kefalonia.

The castle was built to not only defend the area but more importantly to overlook the southern and western coast of the island. Today the castle still acts as a look-out, the only difference is that today’s visitors have eyes for the natural beauty of Kefalonia and don’t need to worry about defending themselves against intruding armies. 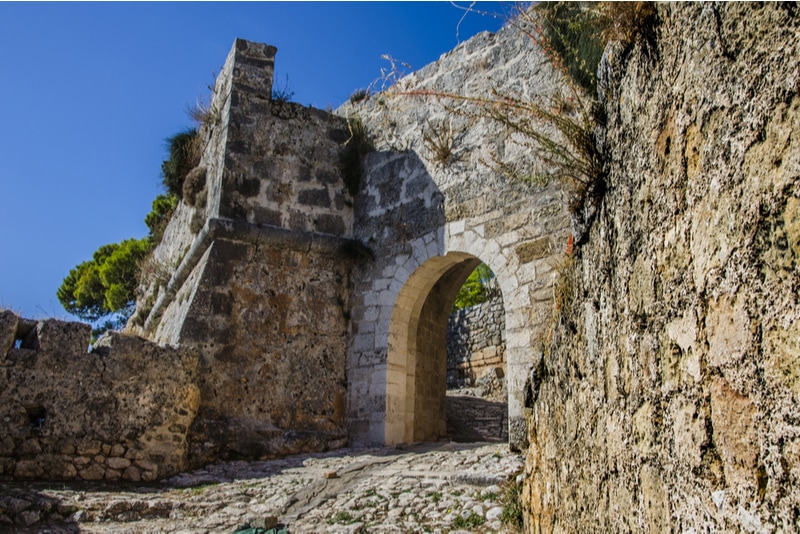 The Drogarati Cave was opened as a tourist attraction in 1963 and features an impressive formation of stalactites and stalagmites. According to speleologists, the cave is around 150 million years old.

This cave is a great place to escape the heat of the summer as the temperature is around 18°C during the whole year. The highlight of the cave is the so-called Royal Balcony. A beautiful natural platform of stalactites. 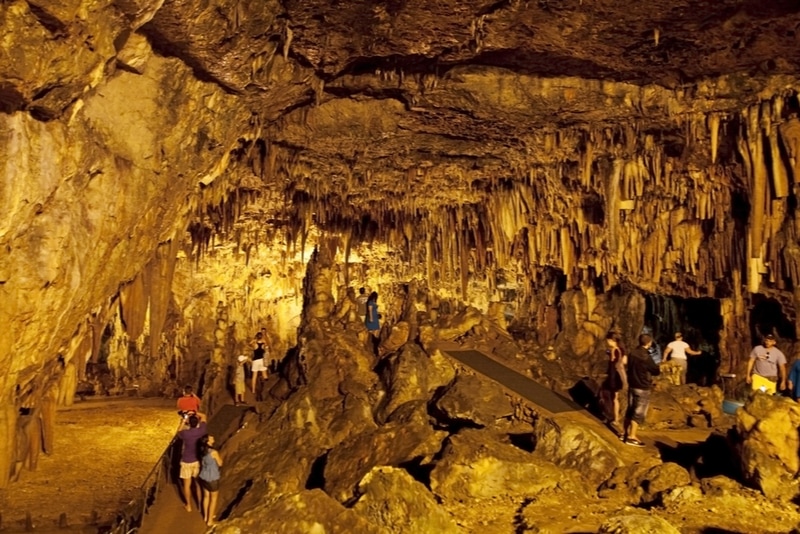 Kefalonia is known for its delicious Robola wine. Visitors should not miss the chance to taste this dry white wine when coming to the island. Even though Robola wine can also be found in other areas of Greece, the grapes from Kefalonia are some of the best due to the island’s ideal cultivating conditions.

Part of the attraction of the wine is not just its elegant taste but also the many lovely wineries and the beautiful family-owned vineyards it comes from. Enjoying a good glass of Robola in a romantic winery with a loved one is one of the best ways to spend an evening in Cephalonia. 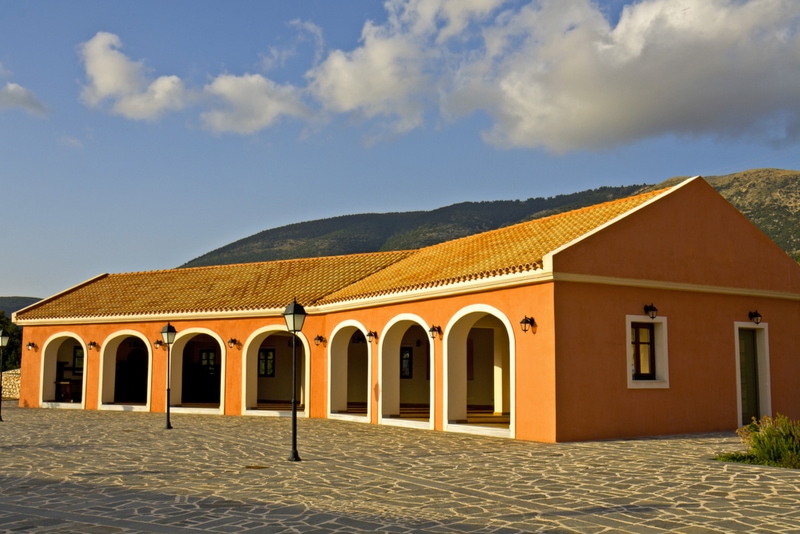 Sailing around the island is one of the most popular things to do in Kefalonia. There are many companies located on the island that are specialized in sailing trips.

Guests have the choice of going on beautiful day trips (for example Ithaka or other parts of the island) or using a yacht for a multiday trip that includes sleeping on the boat.

The Ionian Sea around Kefalonia is generally very calm with predictable winds and little swell, ideal conditions for people new to the sport or families. Visitors should keep in mind that pre-booking a sailing tour before arrival to Kefalonia is recommended during the summer months. 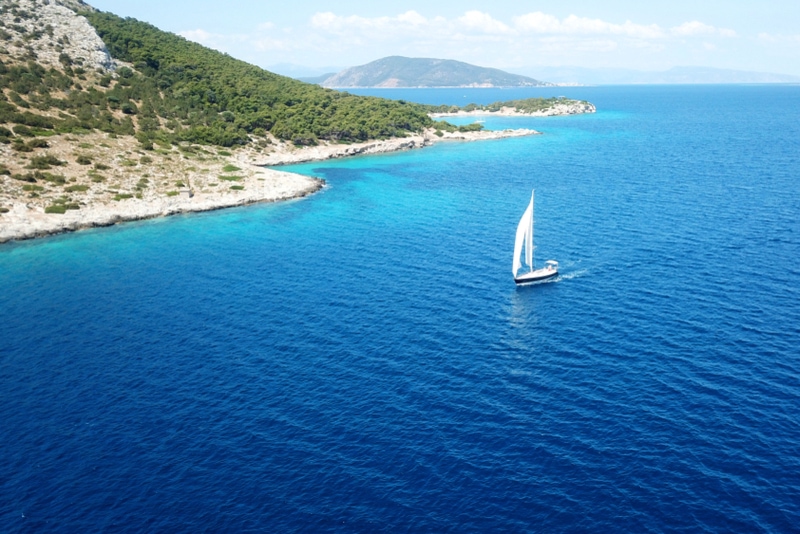 Want more recommendations on things to do in Kefalonia, Greece? Leave a comment below! 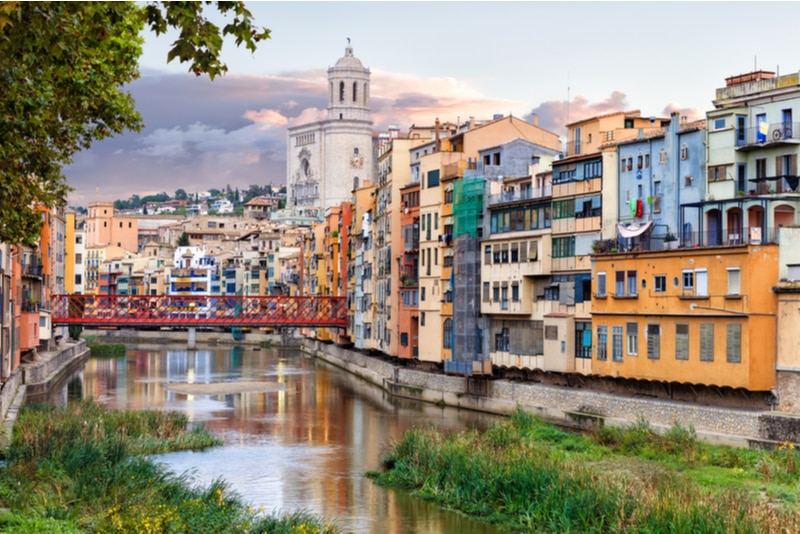 15 Best Things to do in Girona (Spain)
← Read Last Post 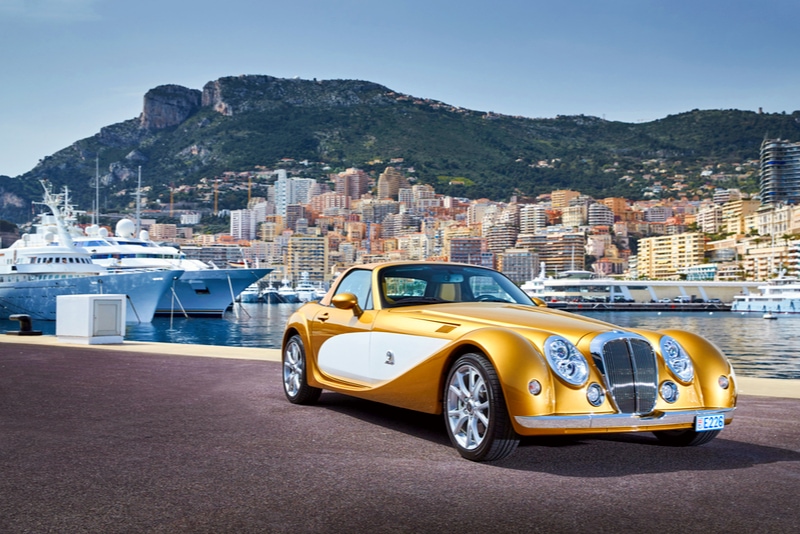