15 Best Things to do in Galway (Ireland) 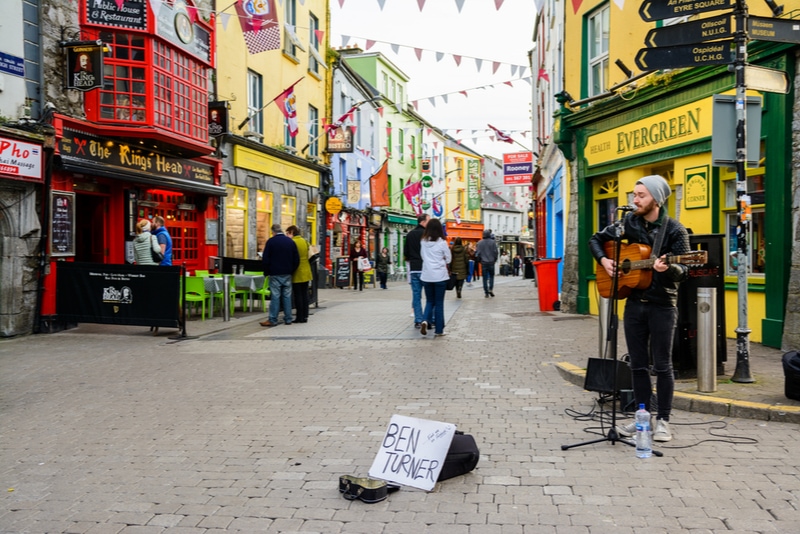 Here’s a list of the 15 best things to do in Galway, Ireland along with famous landmarks, museums, and other points of interest.

But it’s not only food and culture that awaits visitors, Galway is also rich in history and the surrounding area is full of interesting destinations as well, such as the Arran Islands.

In this article, I’m sharing some of the best places to visit in Galway as well as activities and landmarks that shouldn’t be missed while visiting the city.

Galway’s Latin Quarter is known as the cultural heart of the city. Home to Galway’s quirkiest shops, a plethora of restaurants, pubs and hotels, as well as landmarks and attractions, the Latin Quarter has something for everyone.

The pedestrianised area attracts an eclectic mix of locals and visitors. Buskers and entertainers line the cobblestoned streets, and some of the city’s most historical landmarks can be found here. You can also find some of Galway’s best medieval heritage at the likes of Kirwan’s Lane. 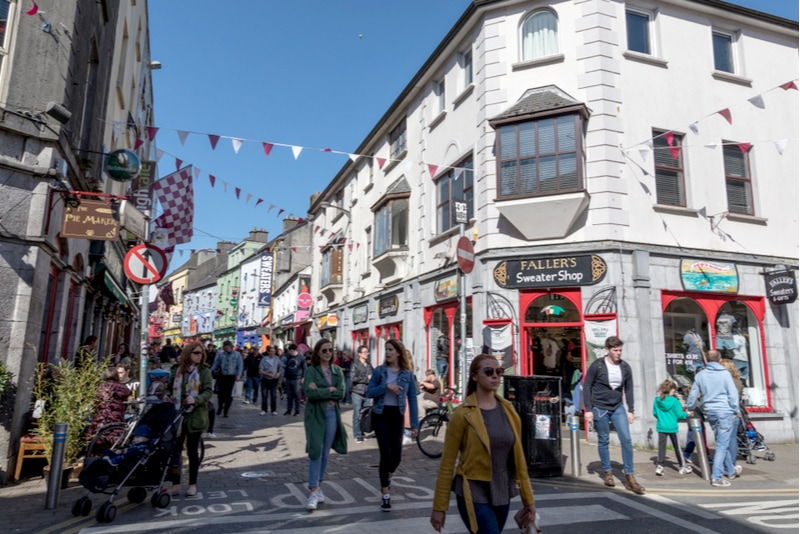 As one of the city’s largest buildings, Galway Cathedral is visible from miles away. The church is built out of Galway limestone and combines several architectural styles, from Spanish to Gothic to Romanesque.

If you’re interested in religious buildings, the Galway Cathedral is one of the most impressive places to visit in Galway. Inside, you’ll find numerous pieces of eclectic artwork from the last 50 years or so.

Highlights include the statue of the Virgin, a vast mosaic depicting the crucifixion above the altar, and the cathedral floor, which is made out of enormous quantities of Connemara Marble. It’s a pleasant place for quiet contemplation or to see religious artefacts. 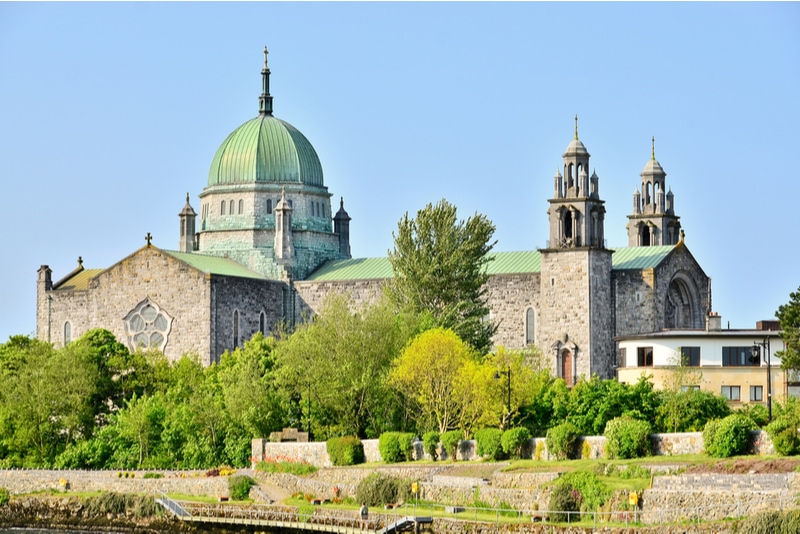 Immerse yourself in history at Dún Aonghasa on the Aran island of Inis Mór. Perched on a 100-metre high cliff above the Atlantic Ocean, the fort is a reminder of Celtic Ireland and is estimated to be over 3000 years old.

The semi-circular fort attracts tourists, scholars and archaeologists from across the globe to see this piece of Ireland’s prehistoric past. Cycle to Dun Aonghasa from Inismór pier and take in the eclectic array of attractions along the way.

Galway is one of the best places to visit in Ireland to try authentic Irish food. On a walking tour of the city, you’ll get to sample Galway’s best food and drink while learning more about the area from your informative guide.

As you make your way around Galway, you’ll eat and drink as the locals do. Stop to sip a tasty pint of Guinness, try locally-produced artisan cheeses, taste freshly-caught seafood and tuck into a traditional Irish stew, the pinnacle of Irish comfort food.

If you’re a food lover like me, this food and drink tour is definitely one of the best things to do in Galway. Because you’ll be sure to learn more about the city while getting a local food experience at the same time.

Merlin Castle, also known as Doughiske Castle, is a 97-foot-high relic of the 15th or 16th century and was once used as a lookout with unobstructed views across Galway Bay and the city.

The National Monument may now be in ruin, but it remains relatively well-preserved and attracts visitors who come to see a slice of Galway history. You can still see the bawn wall and ancillary buildings today, as well as an unusual Sheela Na Gig carving that adorns many similar old castles across Europe. 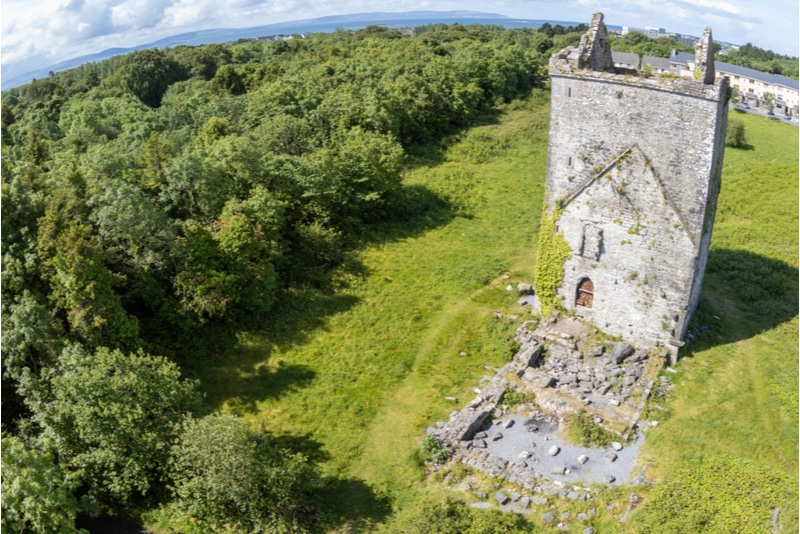 Take a ferry to Aran Islands

Experience the ’real’ Ireland with a trip to the Aran Islands, just a short ferry journey from Galway. The locals here speak Irish, and the islands’ rich Celtic and Christian heritage can still be seen today.

This small area has an unusually high concentration of ruins and sacred sites, meaning the islands attract visitors looking to connect to their spiritual self. Add to that the dramatic beauty of sprawling coastlines, steep clifftops and quaint Irish charm, and the Aran Islands are a must-visit. 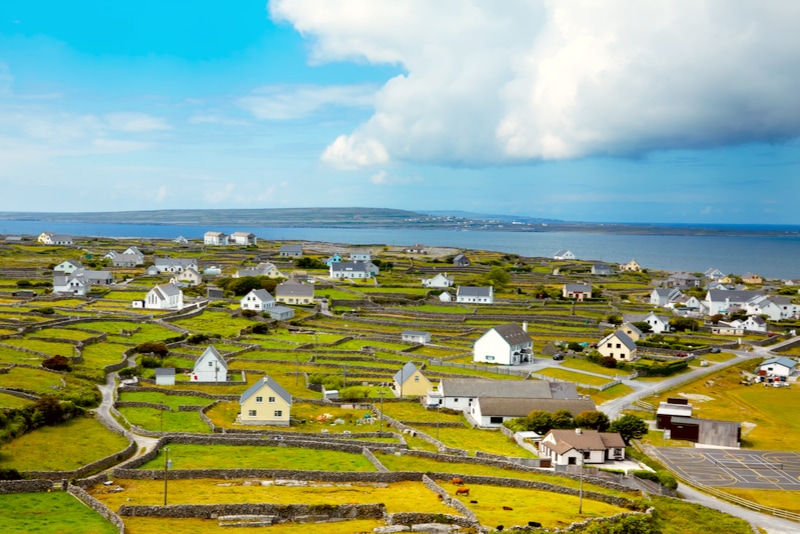 The lively Quay Street is a must-see for any visitor to Galway. The street is one of the city’s most popular and stretches from Eyre Square towards the Corrib. It’s home to brightly-coloured buildings, street performers, and a fabulous array of pubs, restaurants, shops and cafes.

Window-shop at an artisan boutique, sip a coffee and watch passersby, admire the traditional Irish buildings, or wait till night falls and sip a beer in some of Galway’s best nightlife spots.

One of Galway’s most popular attractions, the Galway City Museum, boasts an engaging array of exhibitions with over 1000 artefacts on display. Whether it’s through displays of history, archaeology and sea science, the museum aims to connect people with Galway’s people, past and present.

Over 200,000 people visit the museum each year, and each come away having learned more about Galway’s extensive past. See displays of The Great War, the city’s revolution from 1913-1923, the local coastline and much more. 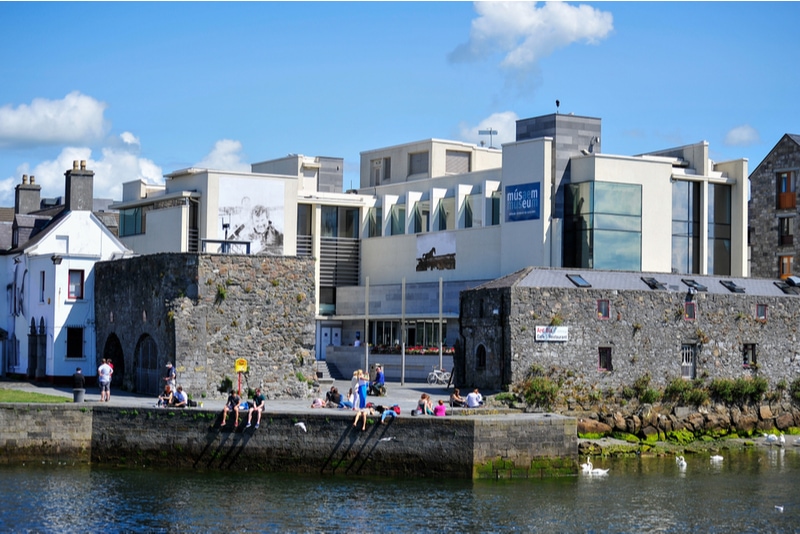 Kirwan’s Lane considered the medieval heart of Galway, is a charming, narrow street home to 16th and 17th architecture, and one of the city’s best restaurants.

The award-winning Seafood Bar and Restaurant offers modern Irish food in a cosy environment. The seasonal tasting menus are only created with the best quality local produce, making the restaurant a hit with locals and visitors alike.

See the beautiful waters of the River Corrib aboard the Corrib Princess. The all-weather passenger boats sails from Woodquay, in the heart of Galway city, along the River Corrib and the Lough Corrib, Ireland’s largest lake.

You’ll see stunning views along the waterway, as you sail past castles and some of the area’s most important historical and cultural sites. Perfect for groups and families, or individuals looking for a unique day out, a Corrib Princess cruise allows you to experience a natural wonderland. 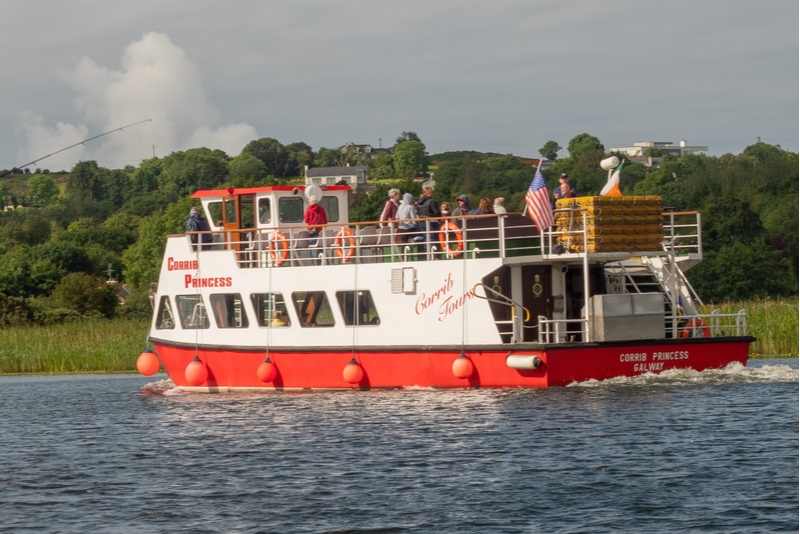 On the left bank of the River Corrib, the Spanish Arch stands as a remnant of Galway’s pre-medieval history. Initially built in 1584, this historical gem housed soldiers who kept watch over the city.

While the arch used to house the Galway City Museum, it now stands as a reminder of the city’s past. Make sure to see the Madonna of the Quays, a wooden sculpture by the artist Claire Sheridan who lived nearby during the 1950s. 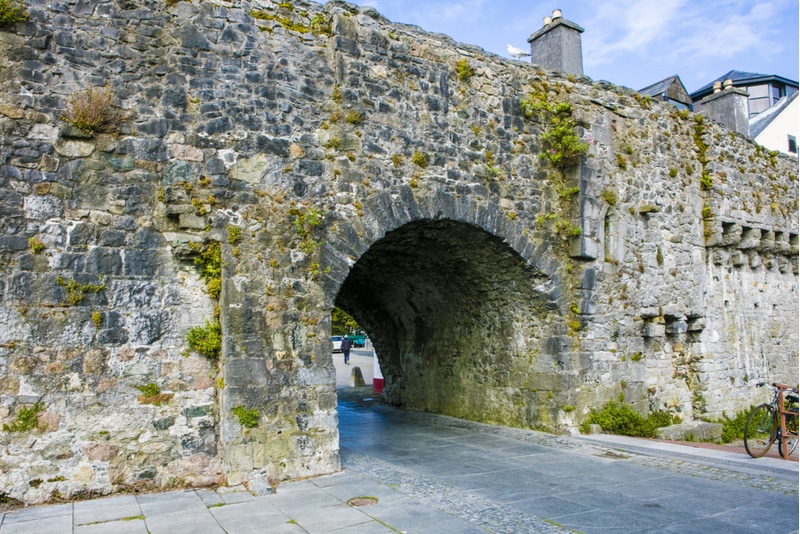 The 2500km coastal road of the Wild Atlantic Way takes in some of Ireland’s most remarkable sites, promising unforgettable encounters with the ocean, nature and spectacular scenery.

Galway is just one stop on the Wild Atlantic Way and is a great place to continue your journey across the six regions on the route. Pack your bags and get ready to see the country’s most breath-taking views, from lush woodland to jagged cliffs, sprawling beaches to rural villages.

The magnificent Dunguaire Castle is a perfect day trip to escape the city. A short stroll from the village of Kinvara takes you to the castle, which sits atop a rocky outcrop on the shores of Galway Bay.

The 16th-century tower house was built in 1520 and is a simple yet stunning feat of architecture. Marvel at the history of the building, then experience the castle as the noble people of the medieval times would have with an incredible banquet. You’ll taste fine wines, locally-sourced food and enjoy fabulous entertainment. 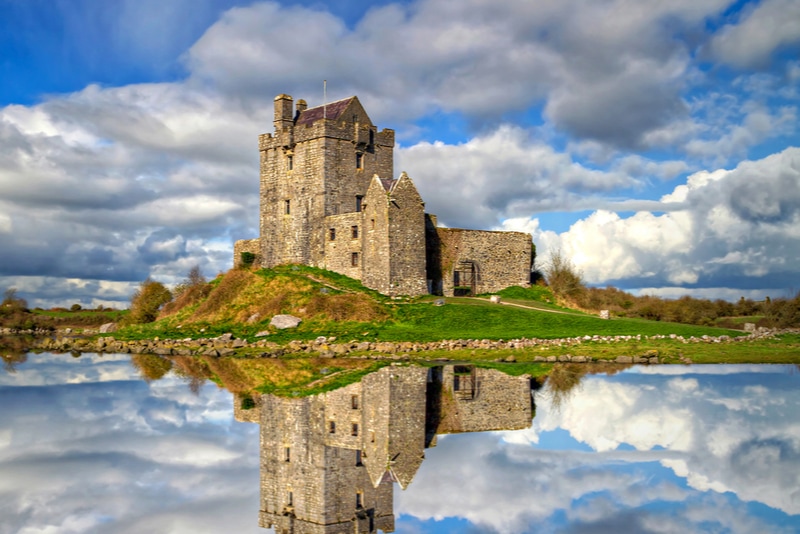 In the heart of Galway city lies Eyre Square, officially known as the John F. Kennedy Memorial Park. Markets took place here during medieval times, though today you’re more likely to find a hubbub of visitors and locals who gather on the square’s grassy banks on sunny days.

See the statue of President Kennedy, who’s final trip was to Galway before his assassination, or shop at the local mall, stop for a bite to eat at the nearby cafes and pick up trinkets from the unique Giftworks store. 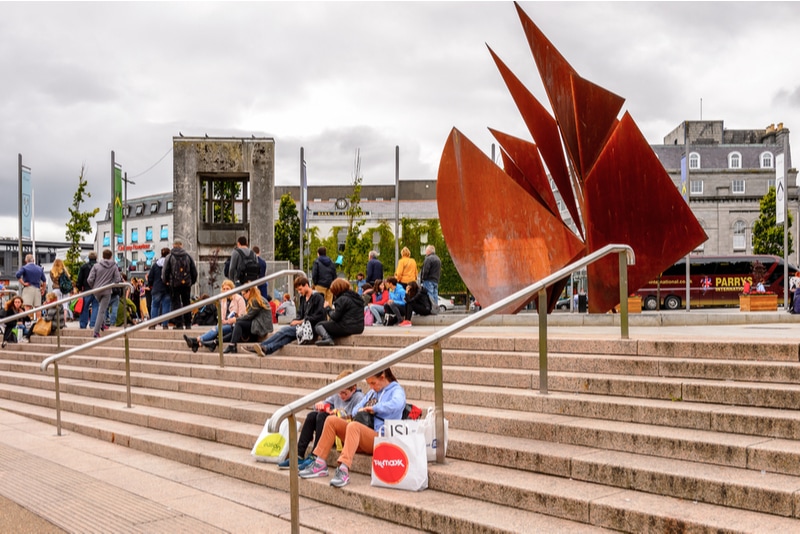 Go for a stroll along Salthill Promenade

Salthill Promenade is a must-visit for anyone looking for a place to relax away from the bustle of city life. With views of the Aran Islands to the left and the city to the right, Salthill boasts an unrivalled location and is the perfect place to watch sunrise or sunset.

Stroll along the 2km coastal promenade to take part in the local tradition of ’kicking the wall’ adjacent to the diving boards. It’s meant to signify the point where you turn to make your journey back to where your walk started. 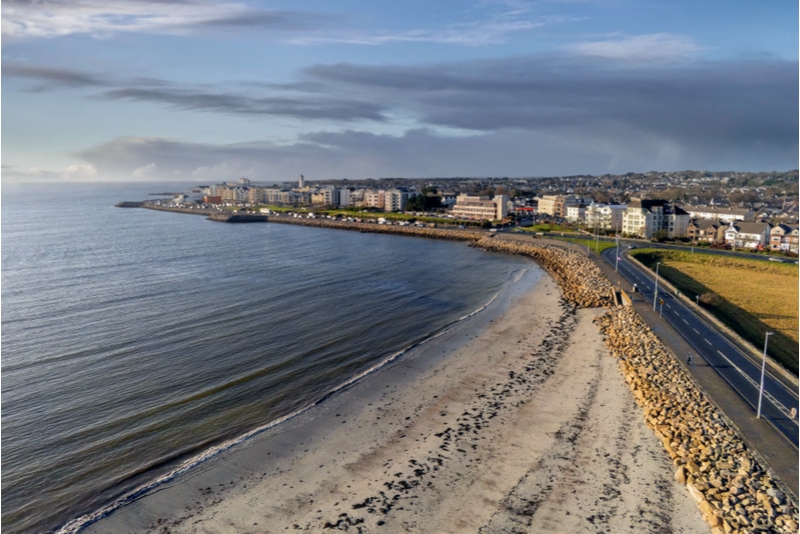 Want more recommendations on things to do in Galway, Ireland? Leave a comment below! 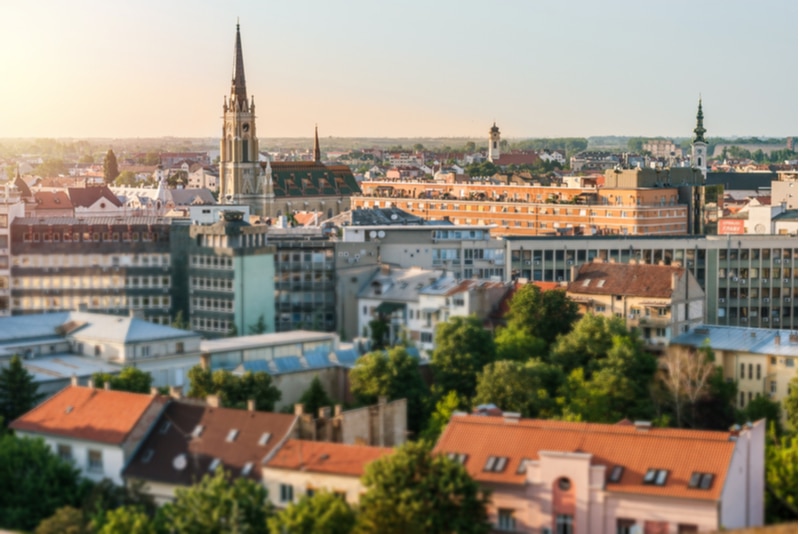