15 Best Things to do in Cork (Ireland) 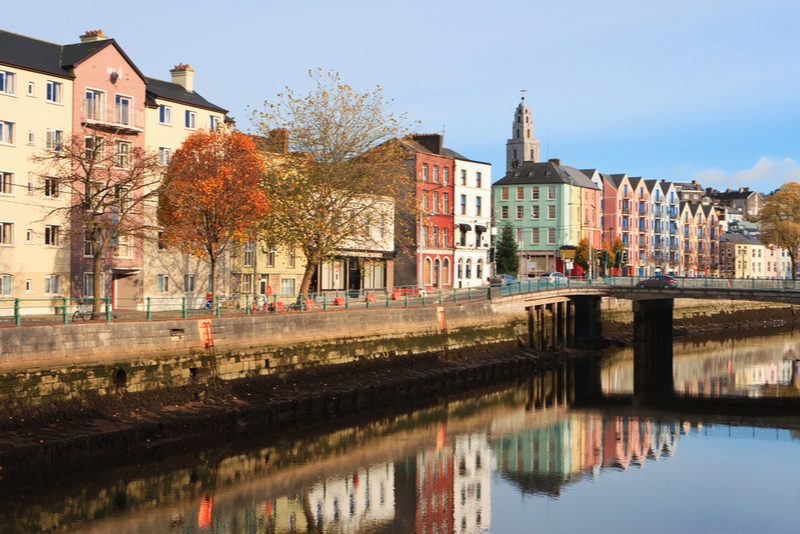 Here’s a list of the 15 best things to do in Cork (Ireland), along with famous landmarks, museums, and other points of interest.

Discover Cork’s gritty past with a trip to Cork City Gaol. The former prison allows you to step back in time, as you come face-to-face with the realities of imprisonment in the 19th century.

The castle-like buildings offer an insight into the day-to-day life of former prisoners, including the reasons behind their incarcerations.

After the prison became uninhabitable, the Gaol became a broadcasting station. Visit the Radio Museum, and you’ll find a studio and remnants of the station’s intriguing past. 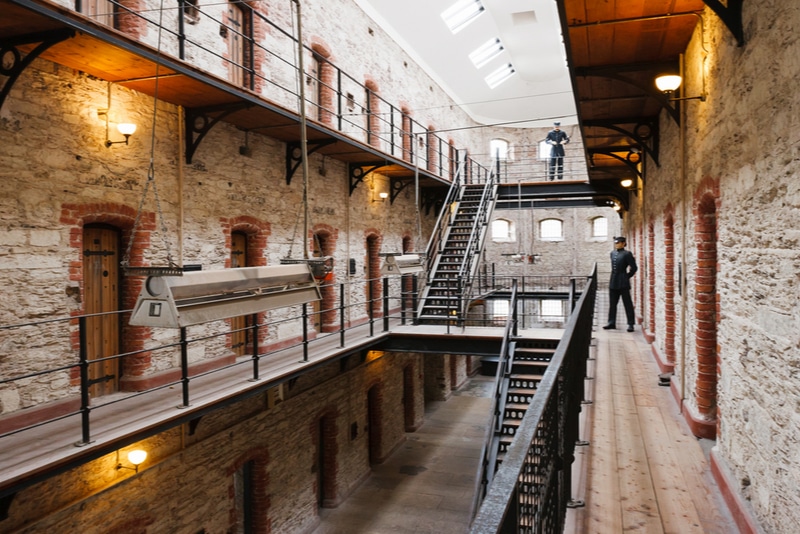 St. Fin Barre’s Cathedral is one of the finest Neo-Gothic cathedrals in Ireland and has been a site of worship since as far back as 606AD. It\s one of the most prominent symbols of Christianity in the city.

This stunning feat of architecture was designed by William Bruges and boasts incredible stained glass windows, mosaics, and over 1500 stone and wooden carvings.

A stroll around the cathedral will immerse you in history; you’ll see statues, gargoyles, a cannonball used in the 1690 Siege of Cork, as well as the story of the Bible depicted in stained glass.

Established in 1788, the English Market is a place where locals continue the centuries-old tradition of trading. The market has served Cork’s people through famines, floods, and wars, and thrives today as a place where heritage and culture combine.

Dedicate some time to wandering around the aisles of the English Market, taking in the sights, smells, and sounds of the bustling stalls and the fresh produce they offer. Sip a coffee, grab a homemade ice cream and enjoy this unique space where history comes to life. 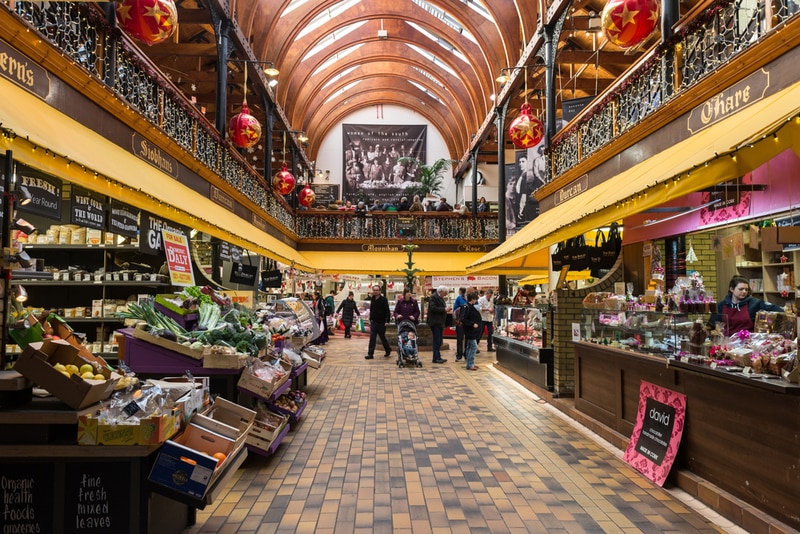 Triskel Arts Centre, situated in the heart of Cork, is a vibrant hub of cultural activity. The unique center can be found within a refurbished Georgian Church, giving the venue a quirky appeal.

Here, you can catch a multitude of live music performances, with everything from classical to jazz concerts, as well as independent film screenings, art exhibitions, and literary events. Try a yoga or dance class with The Collective Cork, or grab some brunch or tapas at the on-site casual dining venue.

At over 300 years old, Oliver Plunkett Street has certainly seen its fair share of Cork history. Today, the street is celebrated as one of Ireland’s best. The partially pedestrianized vibrant street is filled with brightly-colored shops, buskers, and historic buildings.

Oliver Plunket Street is a place to discover the local community, with over one hundred local businesses to be found. Meet the colorful characters who own the nearby stores, grab a coffee and watch people pass by, or simply window shop as you make your way down the vibrant street. 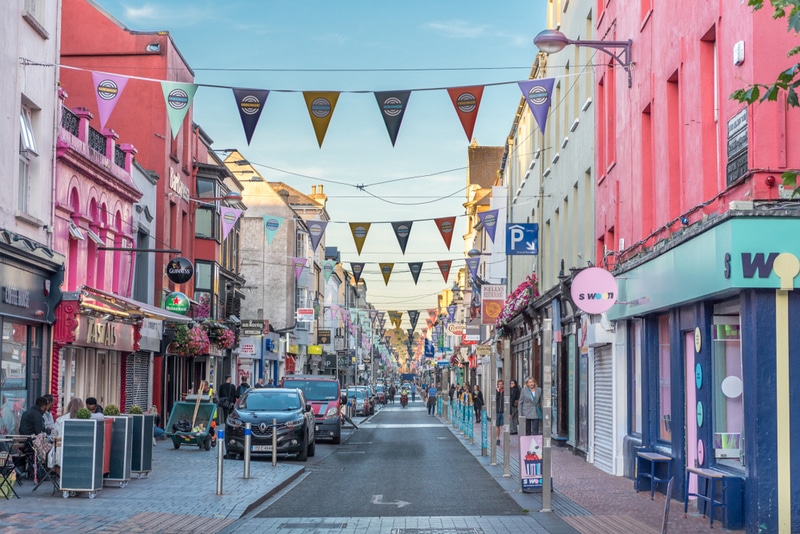 Visit some of Cork’s iconic pubs

No trip to Cork would be complete without a visit to one of the city’s iconic Irish pubs. With a host of live music performances, excellent beers and a buzzing atmosphere, Cork’s pubs are a must-visit.

Head to St. Patrick Street to find some of Cork’s best pubs, including Le Chateau with outdoor seating. Or perhaps you’d prefer to try craft beers at the Franciscan Well Brewery, on the site of an old Franciscan monastery. No matter where you choose to go, you’re sure to enjoy a local tipple you love in a great environment.

Spike Island’s history spans over an impressive 1300 years, having been home to a 7th-century monastery, a fortress, and the largest convict depot of Victorian times.

The vast array of former inhabitants of the island, from monks to rioters to convicts, have made Spike Island what it is today: a must-visit attraction steeped in history.

The island today is dominated by Fort Mitchel, once the largest prison in the world. Explore museums, exhibitions, scenic walks and more as you uncover Cork’s incredible past. 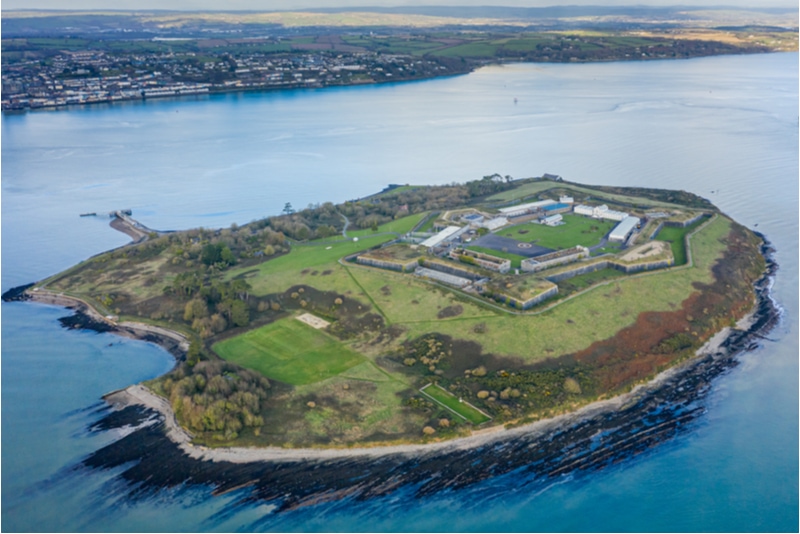 The Church of St Anne is one of Ireland’s most important 18th-century churches. At 50 meters high, the church towers into the Shandon neighborhood’s skyline, making it easy to spot from the winding streets surrounding it.

The colorful stained-glass windows are one of the church’s highlights, while the bell tower offers a spectacular way to see the city from an entirely different perspective.

Climb the narrow stone steps to the top of the tower, and you’ll be rewarded with panoramic views of the city and beyond.

Locals and visitors alike love Fitzgerald Park, a tranquil oasis away from the buzz of city life. Named after Edward Fitzgerald, the city’s Lord Mayor, the park still has features that date back to the Exhibition era.

The original pavilion and ornamental fountain still stand today as a nod to the park’s history.

Take in the serene environment on a stroll around the gardens, where you’ll find a waterlily-filled pond, an array of statues, and a quaint pedestrian bridge with swans swimming on the River Lee beneath it. 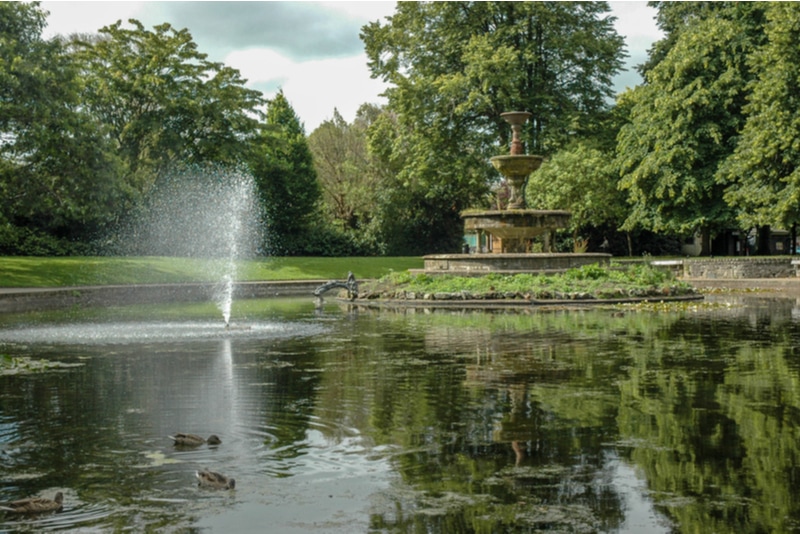 Blarney Castle and the Blarney Stone

Blarney Castle is one of Cork’s most significant landmarks and has attracted visitors from across the globe since its construction nearly 600 years ago.

Thousands of people travel to Blarney Castle each year, whether that’s to stroll the tranquil gardens, explore the enchanting Rock Close or, most likely, to kiss Blarney Stone.

Found at the top of the tower, Blarney Stone has welcomed people from all walks of life who come to gain the gift of eloquence. Legend has it that if you kiss the stone, you’ll never be lost for words again! 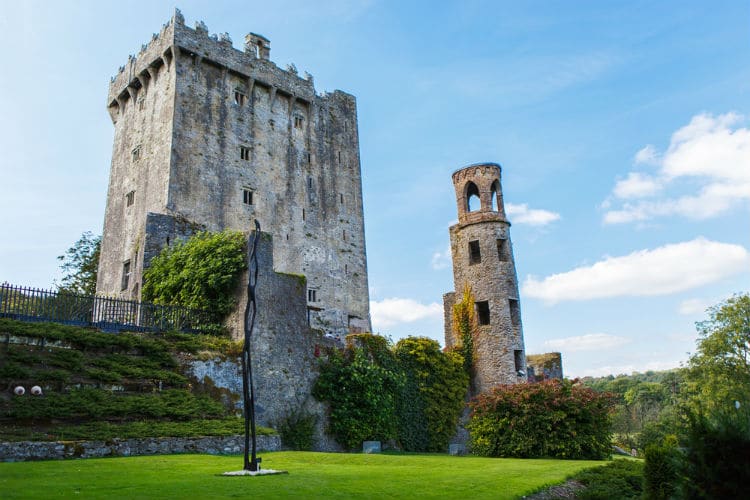 A short drive away from Cork takes you to Cobh, a pretty coastal town on the southern coast of Ireland. Cobh was the original departure point for those emigrating to North America from 1848 to 1950 and was also the final port of call for the RMS Titanic before she set out on her doomed voyage.

Today, the charming town has a distinctly Victorian feel to its architecture and streets. Tourists flock to Cobh to make the most of the activities on offer, such as fishing, sailing, bird watching, and walking tours. 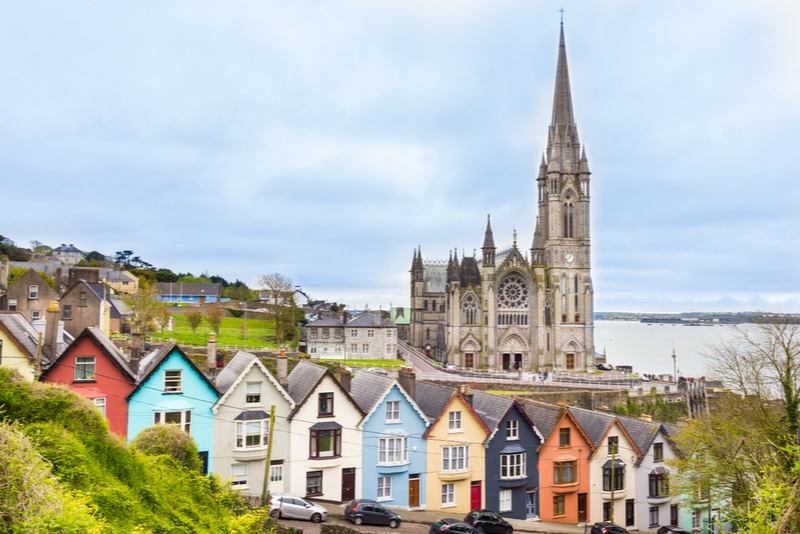 Blackrock Castle Observatory is a must-see for any science buff. The 16th-century castle houses numerous interactive science exhibits, offering a way to bring space back down to Earth in a way that’s accessible for all.

The castle looks out over Cork’s harbor, and once stood as a defense fort against pirates and raiders. Today, it’s a full-time planetarium and a place for kids, families, and other visitors to learn about science, technology, and engineering. 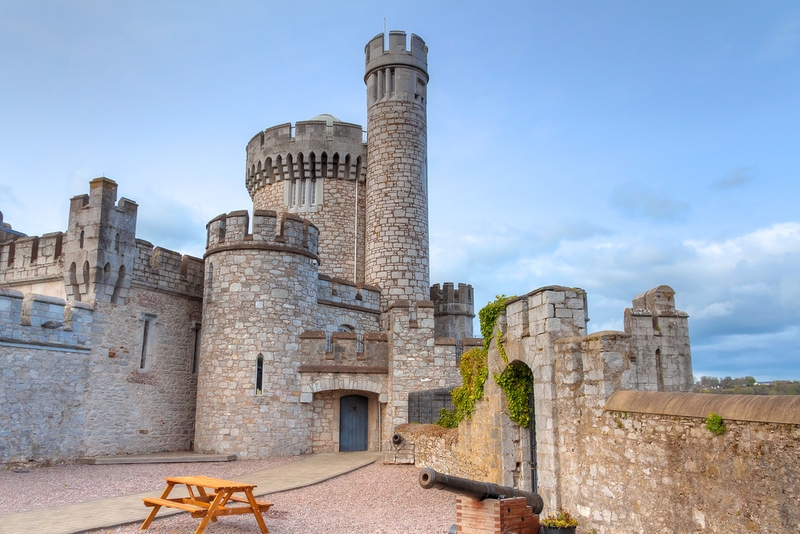 Learn more about whiskey at the Jameson Distillery Experience

No trip to Ireland would be complete without a tour of the famous Jameson’s Distillery on your itinerary. A knowledgeable guide will take you around the distillery, teaching you of the hard-working people who helped to bring John Jameson’s ideas to life.

Go behind the scenes as you tour the principal buildings, you’ll get to try four different Midleton Distilleries’ premium whiskeys. See how they compare to Jameson and learn all about the whiskey distilling process from an expert. 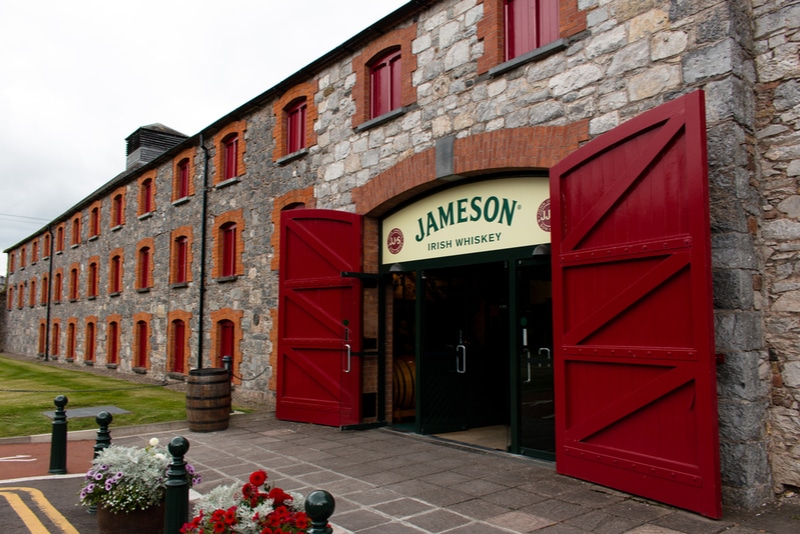 Known to locals as” Pana”, St Patrick’s Street is Cork’s main, and best, shopping street. The street is an eclectic mix of the old and the new; you’ll find 18th-century buildings beside high street stores and a mixture of traditional Irish pubs alongside trendy bars.

Shop-til-you-drop at the multitude of department stores that line the street, then head to one of the local restaurants for a bite to eat. The monument in honor of Theobald Mathew, the Apostle of Temperance, facing St Patrick’s Bridge, is a gentle reminder of the street’s extensive history.

Get a glimpse into Cork’s medieval past at the tower of the Red Abbey. As the city’s only structure remaining from the medieval era, the Red Abbey is a well-preserved relic of the Anglo-Norman colonization of Cork.

While you cannot climb the tower, you can admire the Gothic architecture of the 20-meter structure, from the exterior. Uncover the history of a bygone era at this National Monument, a relic of the 14th century. 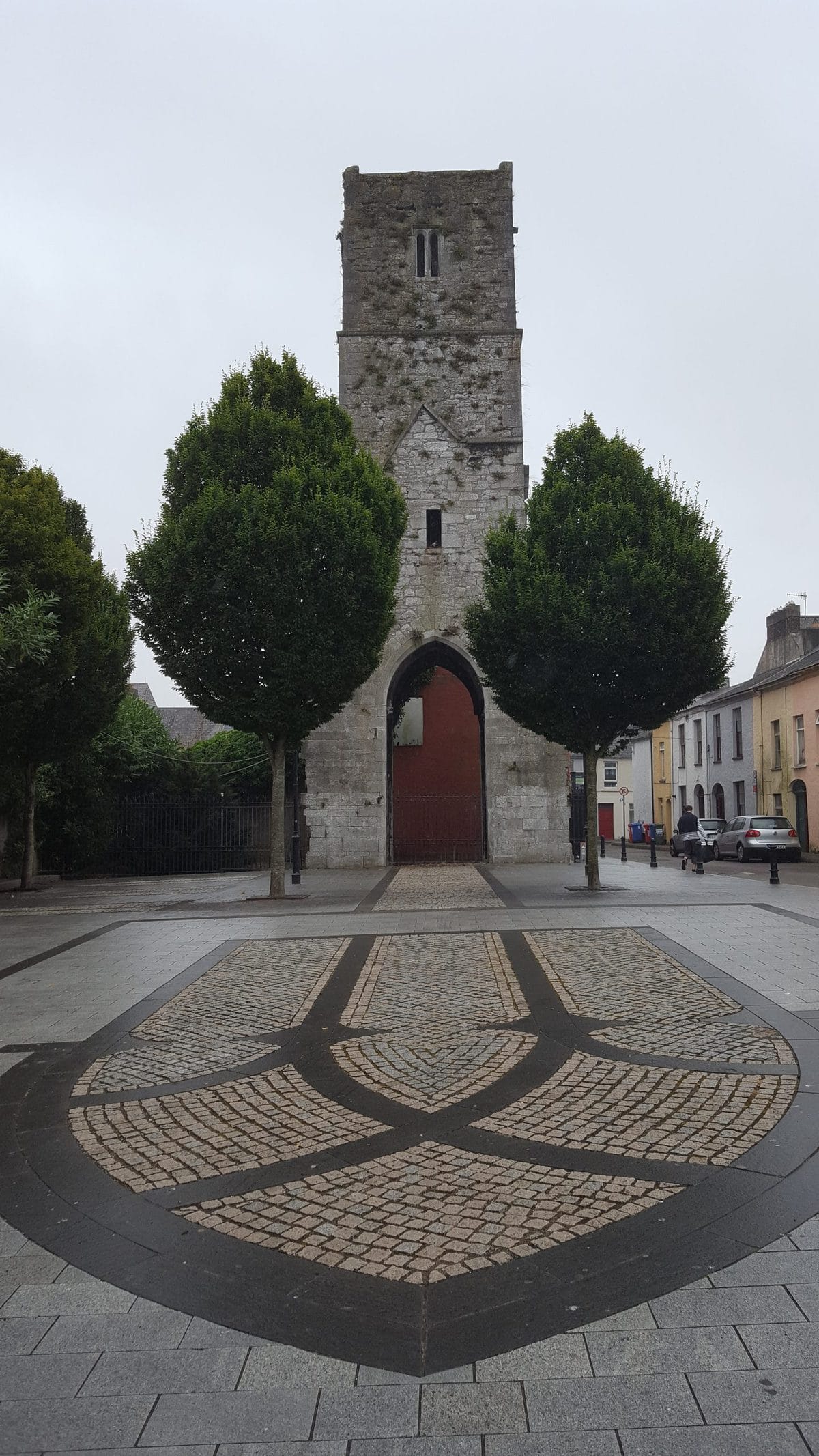 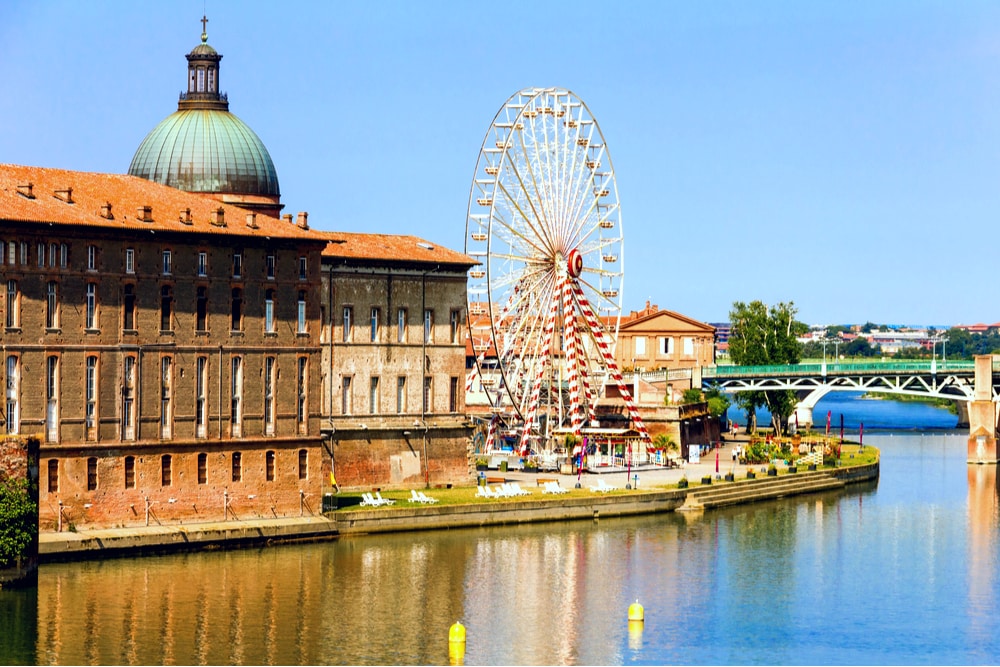 15 Best Things to do in Toulouse (France)
← Read Last Post 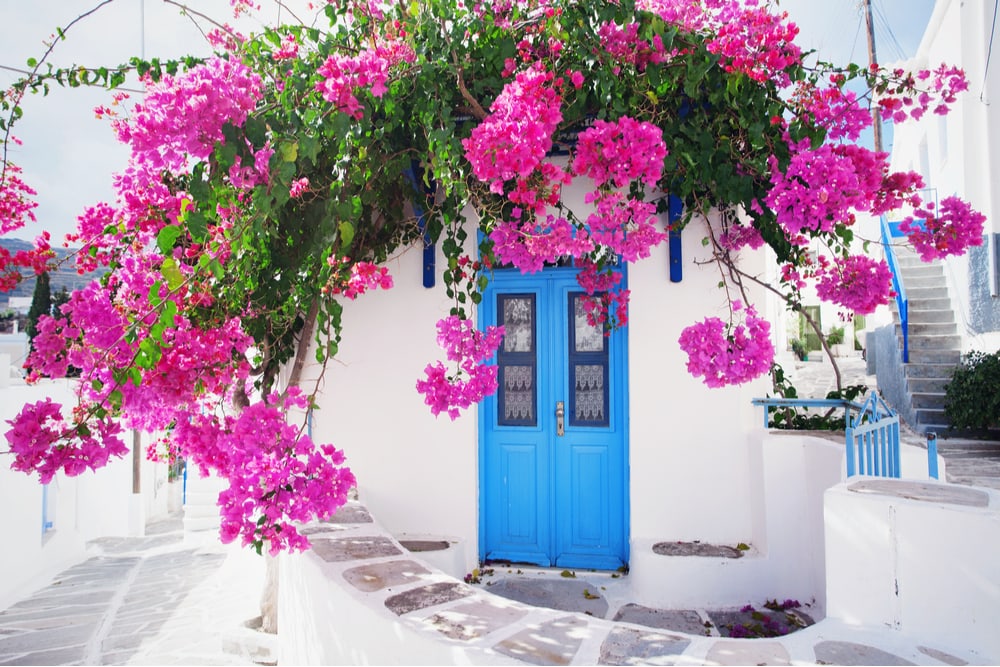