15 Best Things to do in Bogota (Colombia) 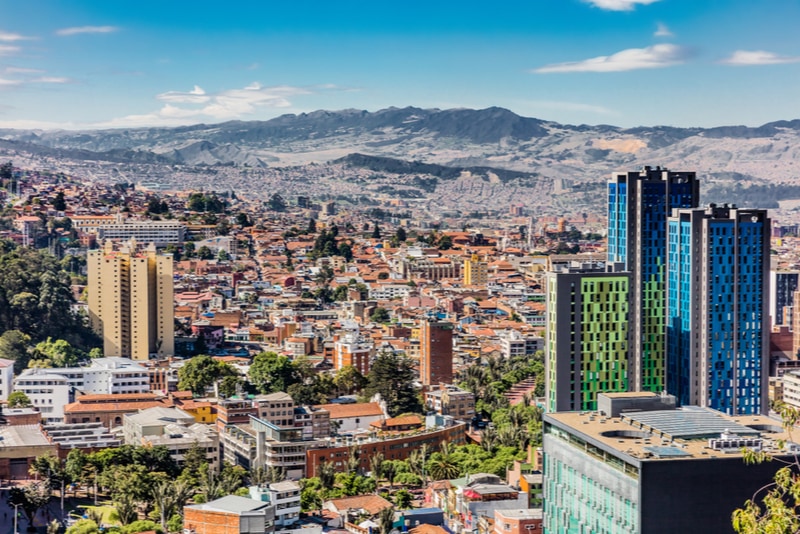 Here’s a list of the 15 best things to do in Bogotá (Colombia), along with famous landmarks, museums, and other points of interest.

Bogotá is the largest city in Colombia as well as the capital with more than 7,4 million people living within its urban area, and 10,7 million in the Metro area.

It was founded already in 1538 by Gonzalo Jiménes de Quesada, a Spanish conquistador. Bogotá is located on a high plateau in the center of Colombia at an altitude of 2,640 meters (8,660 ft) above sea level, making it the third-highest capital in South America, after La Paz and Quito.

Thanks to its rich history and culture, there are lots of interesting places to visit in Bogotá as well as impressive buildings to discover, such as Iglesia de San Francisco and Teatro Colon.

The Museum of Gold in Bogotá is one of the most-visited tourist attractions in all of Colombia, with over 500,000 visitors a year. The museum’s collections display the rich history of gold.

In fact, the museum holds the largest collection of gold artifacts in the world. All these precious metals were formed into tools, pottery, and decorative objects by indigenous cultures hundreds of years ago. Its most famous artifact is likely the Muisca golden raft, 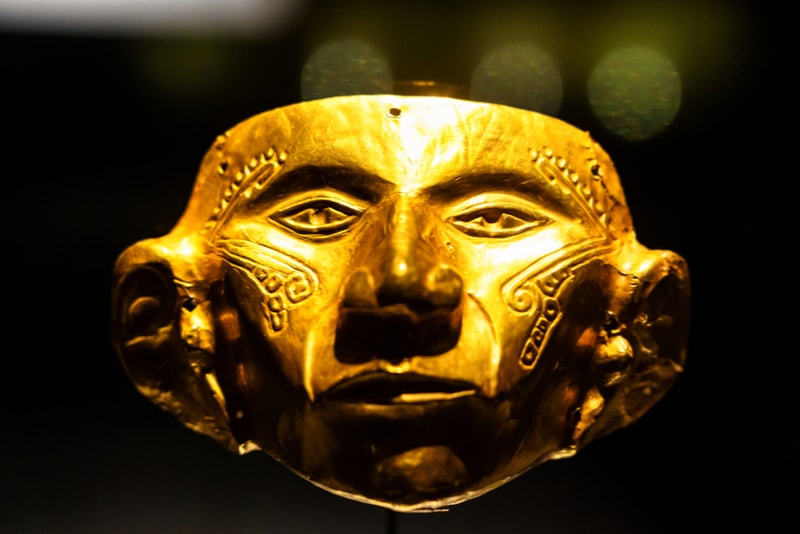 The Salt Cathedral of Zipaquirá

The Salt Cathedral is about a half-hour’s drive from Bogotá, in the charming town of Zipaquirá. It was originally created by miners as a sanctuary for them to pray, made from salt mine tunnels 200 meters below ground.

It has been renovated and added to several times, most notably in the 1950s, which was when the huge cathedral was added. The gorgeous site is made up of dark pathways, lit with spooky lighting and lined with the Stations of the Cross.

The cathedral is gigantic, with an enormous cross as its focal point, and receives as many as 3,000 faithful each Sunday. 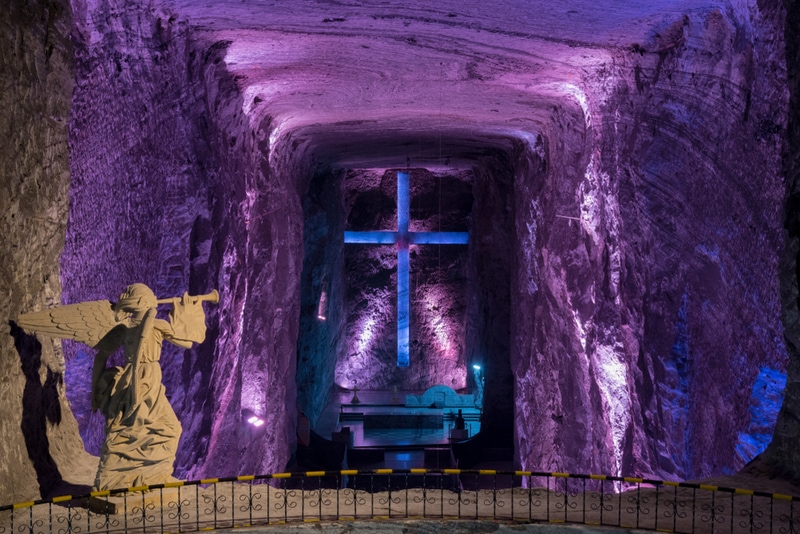 La Candelaria is one of Bogotá’s most famous and historic neighborhoods. It is lined with old buildings, whose mix of Baroque, Spanish colonial, and art deco architecture is picturesque.

Walk its streets, but be sure to stroll down the Calle del Embudo and into the Plaza del Chorro, a bright route that is full of street art and graffiti.

The Plaza is believed to be the site of Bogotá’s founding, on August 6, 1538. Many of Bogotá’s landmarks are in this neighborhood, from the Gold Museum to the Poetry House to the Botero Museum. 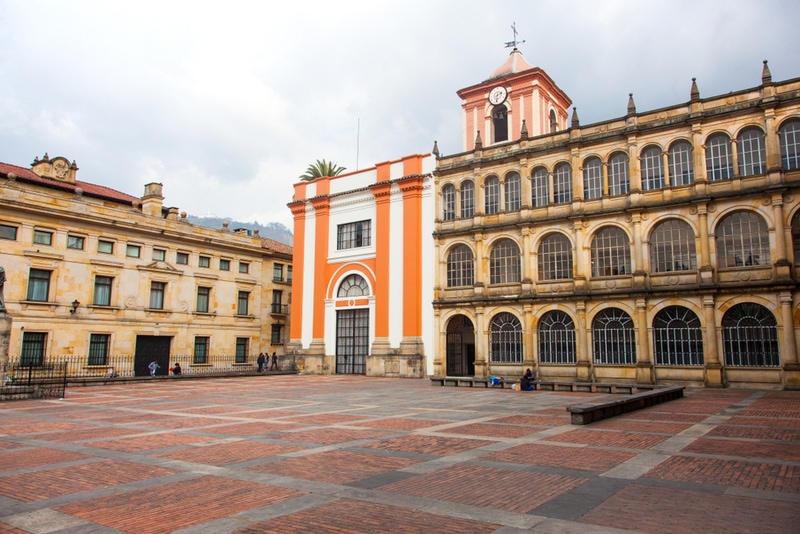 This sanctuary, the National Shrine of Our Lady of Carmen, sits in the center of the city, above the La Candelaria neighborhood. It has a beautiful, famous striped façade, reminiscent of the Moorish churches in the south of Spain.

It was designed by Giovanni Buscaglione, and it took 12 years to construct, from 1926 to 1938. The 20th century wreaked havoc on its beautiful exterior, but the restoration that took place in the 1980s and 90s brought it back to its original glory. 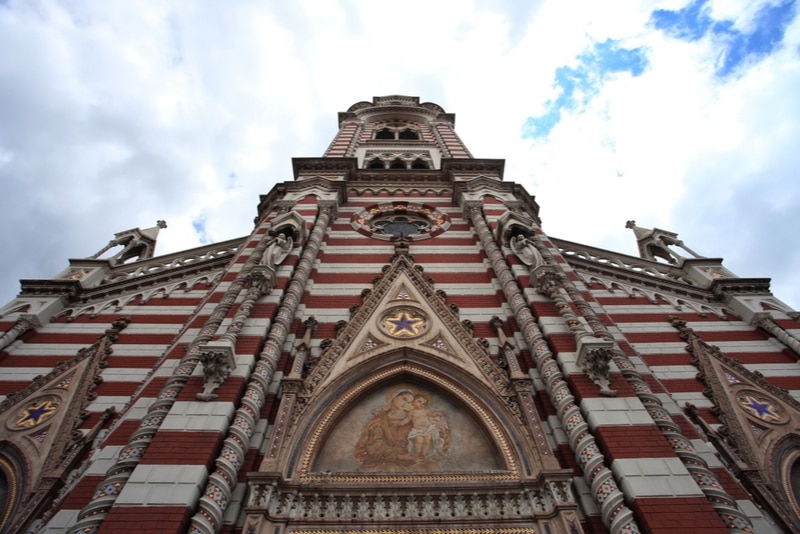 The mountain Cerro de Monserrate is the 10,000-foot peak visible from downtown Bogotá, providing a naturally gorgeous city skyline. The site’s importance as a sacred place dates back to pre-Hispanic time.

The Muisca people called it the grandmother’s foot, considering it quite sacred due to its location during the summer solstice. A small religious retreat was built on top during the colonial period.

Now it holds the shrine of El Señor Caído, a popular attraction in the church on Monserrate. You can reach the top by foot, cable car, or funicular. 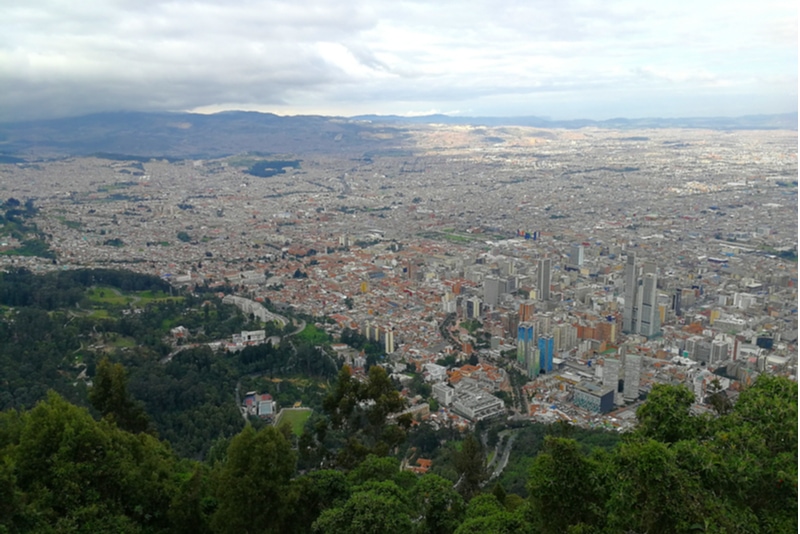 The cemetery of Bogotá holds some of the city’s most illustrious historical persons. Many of the tombstones in the cemetery have special superstitions attached, such as that of Julio Garavito, an astronomer whose tomb has been painted blue.

Legend has it that if you rub the tomb with a 20,000 peso bill, which has a picture of him on it, you will have good luck. The cemetery opened in 1836, and features many above-ground mausoleums, making it an interesting spot to visit.

The “False Door”, as the name of this restaurant translates, is the oldest eating establishment in Bogotá, open for over 200 years. They serve traditional Colombian food from their 20-person restaurant, located in a colonial home off of the Plaza de Bolivar.

Opened in 1816, some menu items have been served since before patrons were born, like the tamales and ajiaco soup. Across the street from the restaurant was a false door, set into the Catedral Primada—over the years, this false door came to be associated with the restaurant, which at first had no name.

Lake Guatavita is a sacred lake about an hour outside of Bogotá. Part of the Muisca indigenous tradition, it is said that the leader would cover himself in gold dust before drifting out on the lake with an offering of precious metals and stones that would be thrown into the water.

The surface of the lake is about 20 hectares, a deep and dramatic body of water in the middle of the mountains, likely to have been formed by the dissolution of underground salt deposits. The legend of El Dorado has it that the bottom of the lake is lined with riches and treasure. 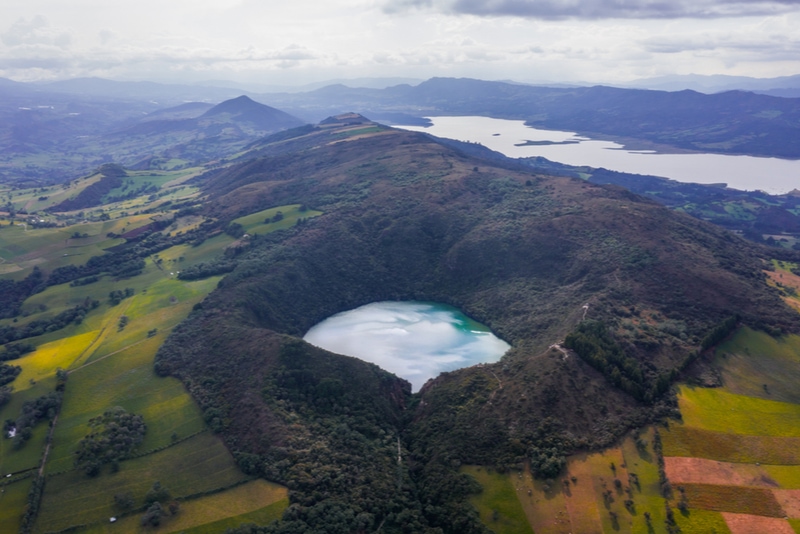 Bogota’s most popular flea market takes place in the town square of a colonial residential neighborhood of the city. Open every Sunday and holiday from 9 am to 6 pm, the flea market features over 200 stalls and is visited by more than 20,000 people.

The items sold include jewelry, clothing, accessories, and more. A visit to the market is obligatory, as well as agreeable thanks to live music and street food. 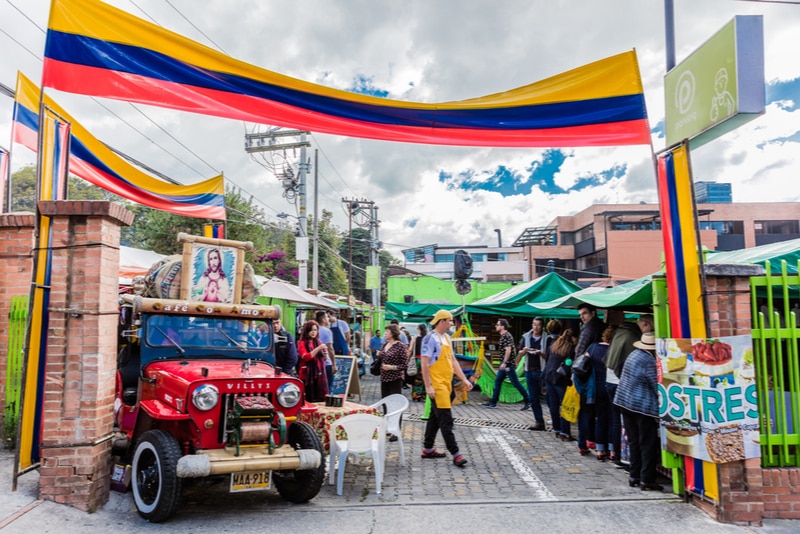 Fernando Botero is a Colombian artist known and celebrated all over the world for the rotund figures that populate his paintings and sculptures.

The Botero Museum in Bogota is made up of the most important collections of his work and international art by other artists, donated by the Botero in 2000.

Over 1,000 visits daily make it one of the most popular attractions in Colombia. The collection holds 123 Boteros and 85 other works of great importance. The entrance is free. 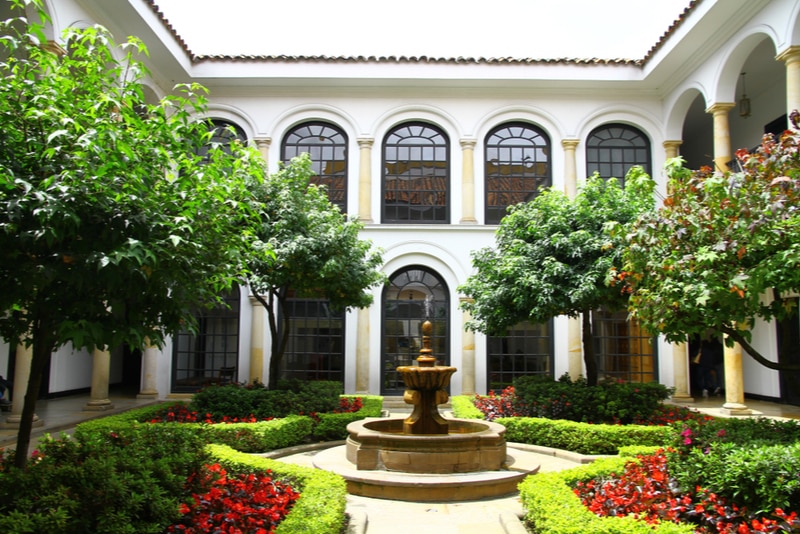 The main town square of Bogotá is expansive and breathtaking. Named after Simon Bolivar, the plaza actually dates back to 1539 as Plaza Mayor.

In the center, you can find a statue of the leader, sculpted by Italian artist Pietro Tenerani in 1846, Bogota’s first public monument. The site was formerly part of the Muisca Confederation before becoming the Colombian capital.

Plaza de Bolivar is bordered by historical buildings, including the Palace of Justice, the Northern Capitol, and the Cathedral. 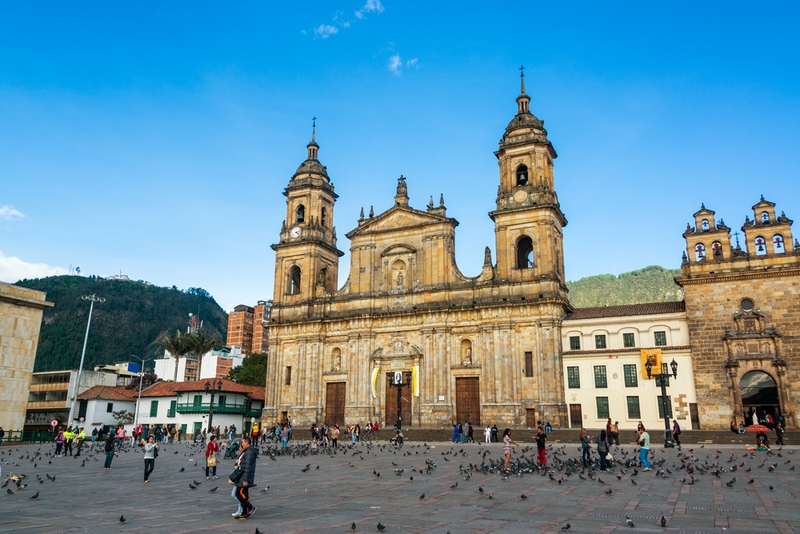 The Colombus Theater in Bogota is one of the city’s most important buildings. Opened in 1792, it faced an important renovation in 1892 by the Italian architect Pietro Cantini. His beautiful Neoclassical exterior is the one on display today.

Today, the theater can be toured or you can attend an opera, concert, ballet, or play to see its interior firsthand from one of its 785 seats. The Palais Garnier serves as its model, although the exterior features carved stone in the Tuscan Doric style. It was voted as one of the seven wonders of Colombia.

The foyer room is located on the second level of the theatre. In this room, the architectural ornamentation of the pilasters, doors, and windows stands out as well as the frescoes on the ceiling. Music concerts with small orchestras, chamber music groups, and recitals are carried out in it. 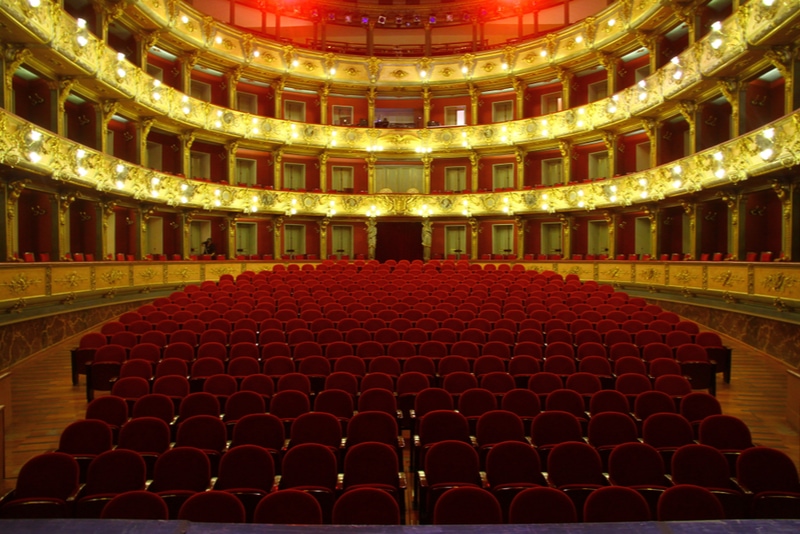 In the center of Bogota lies a beautiful botanical garden. The largest in Colombia, Jardin Botanico de Bogota Jose Celestino Mutis features a multitude of flora that originate from every region in Colombia.

The collection of flowers includes 5,000 different types of orchids alone!  The botanical garden was founded in 1955.

Santa Clara is actually a former church, deconsecrated in 1968. Today, it is a museum of religious art, specializing in the Baroque. The building dates back to 1629, and the vault is ornately decorated with over nearly 150 paintings and sculptures.

Housed in a former prison, it now holds ancient pottery, ornaments, and exhibits on the conquest and Colombia’s fight for independence.

The museum also features art by Botero and other famous Colombian artists. And even though the exhibits are only in Spanish, the museum is definitely worth a visit. 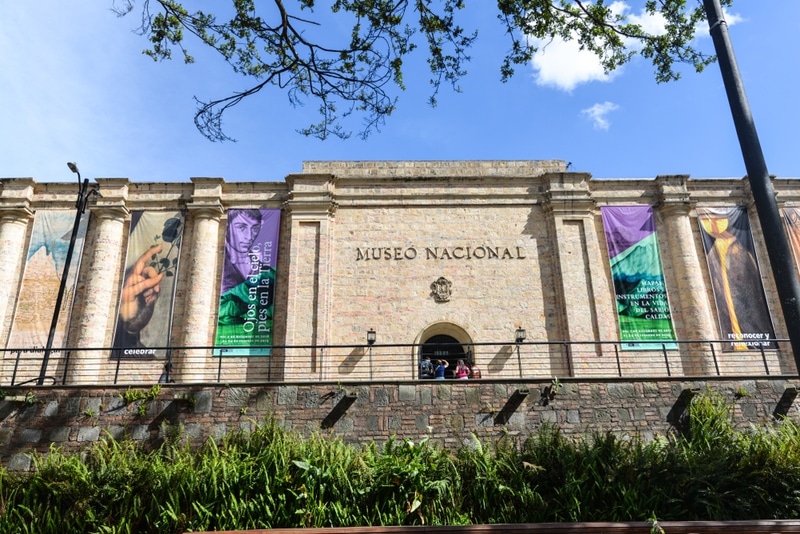 Want more recommendations on things to do in Bogotá, Colombia? Leave a comment below! 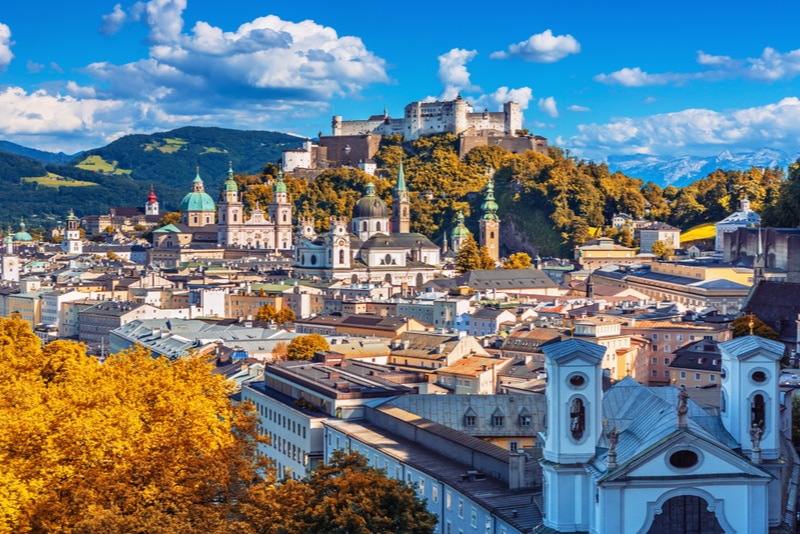 15 Best Things to do in Salzburg (Austria)
← Read Last Post