15 Best Things to do in Baton Rouge, Louisiana 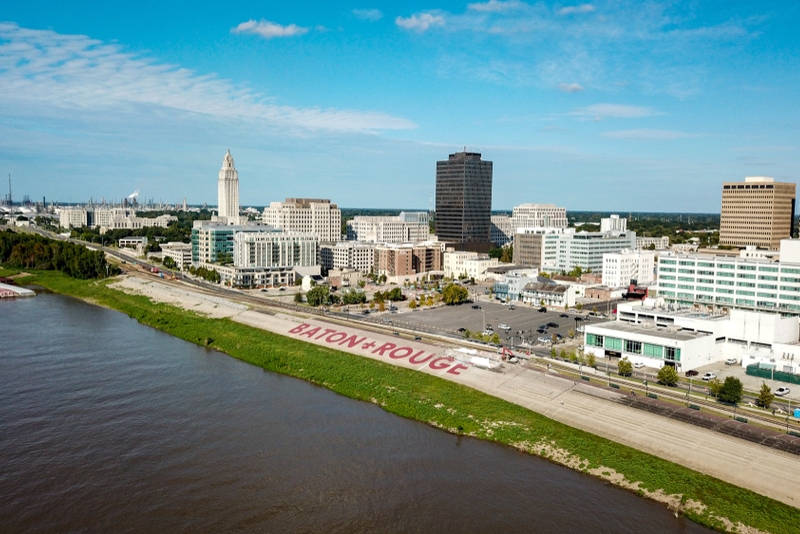 Here’s a list of the 15 best things to do in Baton Rouge, Louisiana (USA), along with famous landmarks, museums, and other points of interest.

The Tiger Stadium is the most remarkable sports venue in Baton Rouge, it is located on the campus of the Louisiana State University and hosts the LSU Tigers.

American football is one of the most popular sports in the USA. Experiencing the culture behind the sport is a fascinating experience for everyone, sports lovers, and couch potatoes alike. 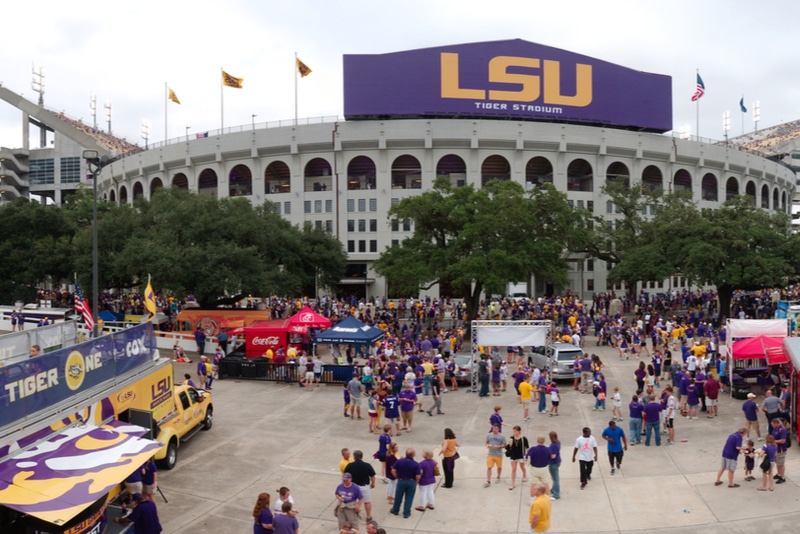 The old state capitol was erected between 1847 and 1852 and is one of the oldest buildings still in use today. It is built on a hill overlooking the Mississippi River and resembles medieval European fortresses.

Its interior is richly decorated in marble and wood. This building is also home to several exhibitions and an award-winning multimedia presentation about the controversial state governor Huey Long. 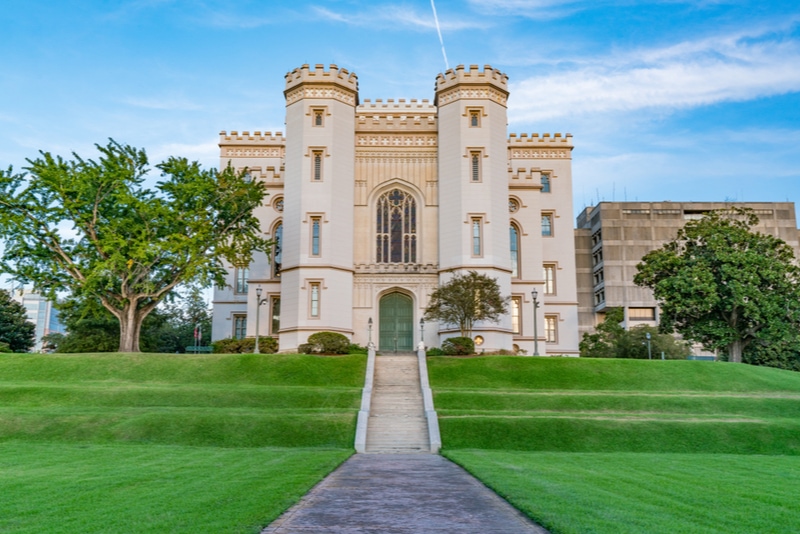 The Rural Life Museum is a project of the Louisiana State University and focuses on recreating a typical village of the 18th and 19th centuries.

Visiting the museum is a journey back in time and brings you closer to the lives lived here in past centuries. There is a remarkable collection of artifacts and architecture preserved in the tranquil rural landscape. 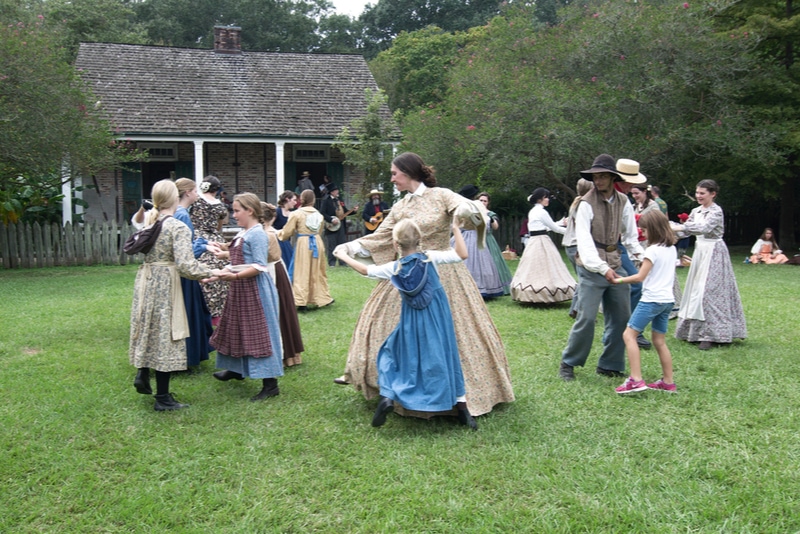 The USS Kidd is a museum ship located in Baton Rouge. The USS Kidd is a Fletcher-class destroyer that was used in the Second World War and the Korean war. Today the ship is open to the public and can largely be explored by its visitors.

You can not only explore the ship but also learn a lot about its history of service and the man it was named after. The USS Kidd is certainly one of the most exciting and engaging museums you will ever visit. 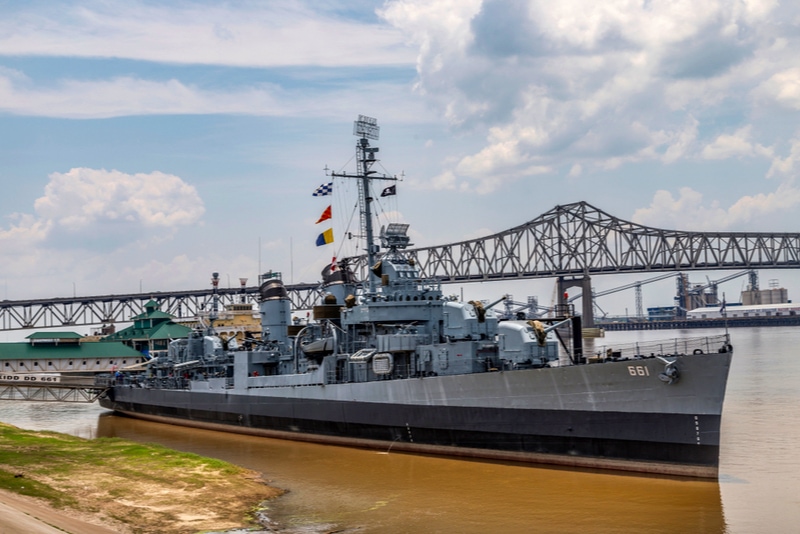 Louisiana State Capitol is the seat of the government of Louisiana. The building was constructed in 1931 and declared a National Historic Landmark in 1982.

The State Capitol is 137 meters tall and consists of 34 stories, making it the tallest building in Baton Rouge. One of the main draws of the building is its fantastic location.

It is situated right next to Capitol Lake and the Mississippi River, surrounded by the Veteran’s Memorial Park and the gardens of the capitol. Taking a relaxed walk through this area should not be missed when visiting Baton Rouge as this is the city’s most beautiful area. 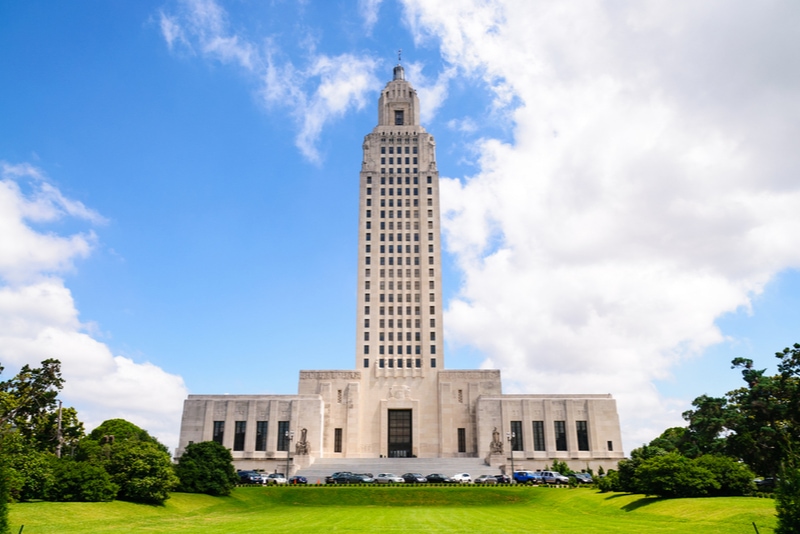 The Red Stick Farmers Market is one of the most popular food markets in downtown Baton Rouge. Numerous local farmers offer their fresh produce here, for food lovers who value fresh, regional fruits and vegetables this is the best place to be.

There are also many restaurants and shops located in this area. A great place for lunch, dinner or just some snacking in between.

Nature-lovers will find the Bluebonnet Swamp Nature Center one of the biggest attractions of the region. The site offers a 103-acre conservation area that aims at educating visitors while also being a great place for recreation.

One of the highlights of the facility is the large main building housing many animal exhibits as well as a photographic presentation of the flora and fauna of the area.

Many boardwalks were constructed here that allow easy exploring through the swamps and beech-magnolia forests. There is also plenty of wildlife to be found here, especially the hundreds of bird species are really impressive and draw a lot of bird watchers to the center. 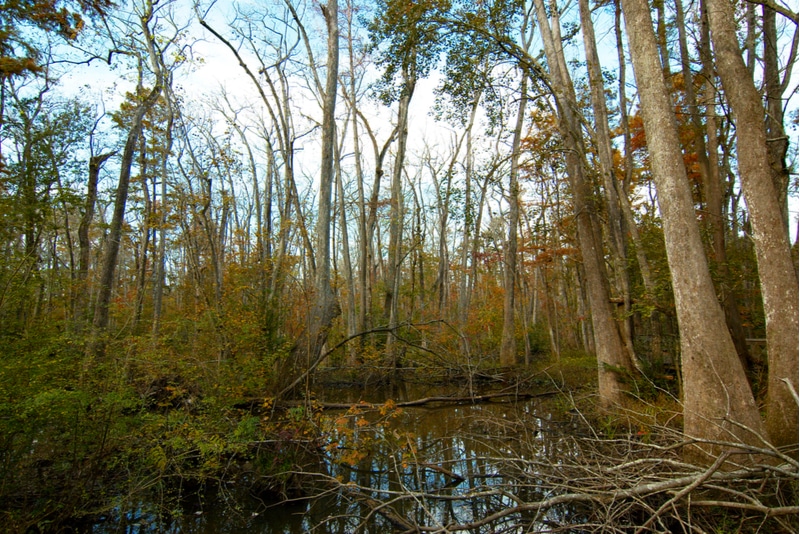 The Shaw Center for the Arts offers its guests access to the renowned LSU Museum of Art. The museum offers 14 galleries and presents art in a wide range of media.

The roughly 6,000 works on display stem from regional, American, and European origins and include paintings, sculptures, and photography. There are also numerous workshops held here, a great way to get in touch with artists and other art-lovers.

Magnolia Mound Plantation is a great example of the vernacular architecture that was introduced to the region by the first settlers from France and the West Indies.

This old plantation acts as an education center and museum and aims at explaining the life of the French Creoles that heavily influence the region to this day.

The house exhibits an impressive number of locally made furniture from the colonial period in the house museum. Apart from the dominant building, there are also several other well-restored structures to be found, such as the overseer house and the kitchen. 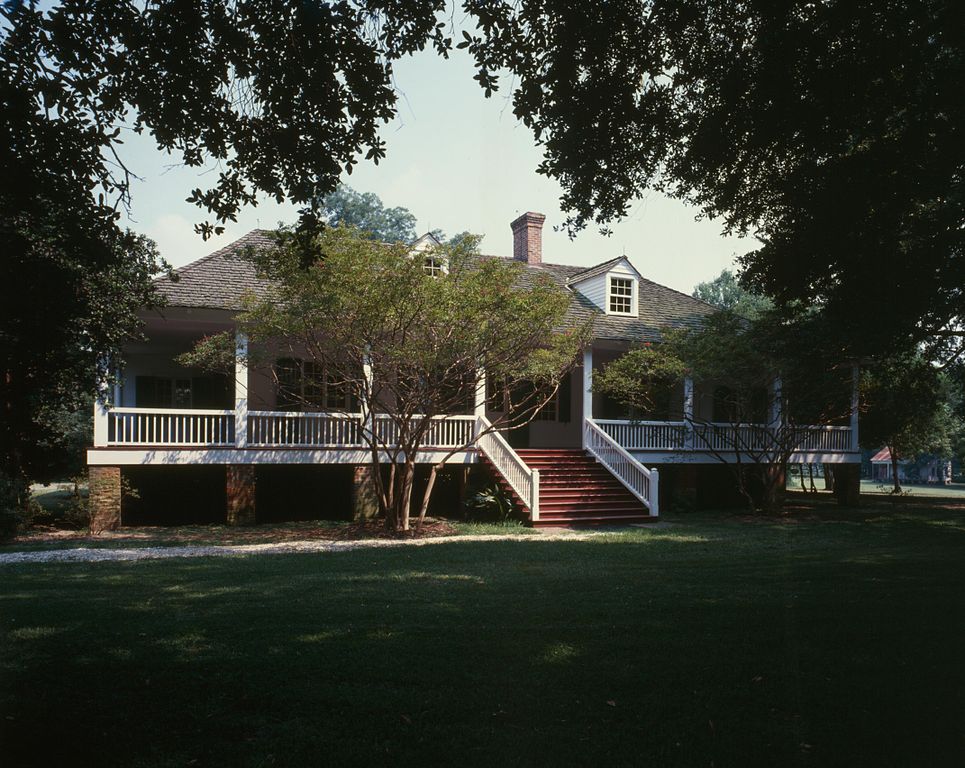 Baton Rouge is known for its delicious food and the C’est Si Bon Food Tour is a perfect way to explore the mouthwatering Southern cuisine of the USA.

The tour has six stops and begins at the Poor Boy Lloyd’s before continuing with the Stroube’s, the Zolia Bistro & Enoteca, The Lobby Café, Restaurant IPO, and the Kingfish Grill.

Since its introduction, the food tour has received fantastic reviews and developed into one of the most popular things to do in Baton Rouge.

Lake Maurepas is located close to the Gulf of Mexico, between Baton Rouge and New Orleans. The lake has a size of roughly 240 km². And a mean depth of only 3 meters. What makes the Maurepas such an attractive lake is that it’s almost completely untouched.

There are no big development projects going on, no big cities or factories spoiling the beauty of nature. The lake is characterized by tupelo swamp and second-growth cypress trees. Kayaking and fishing are the two most popular activities here. 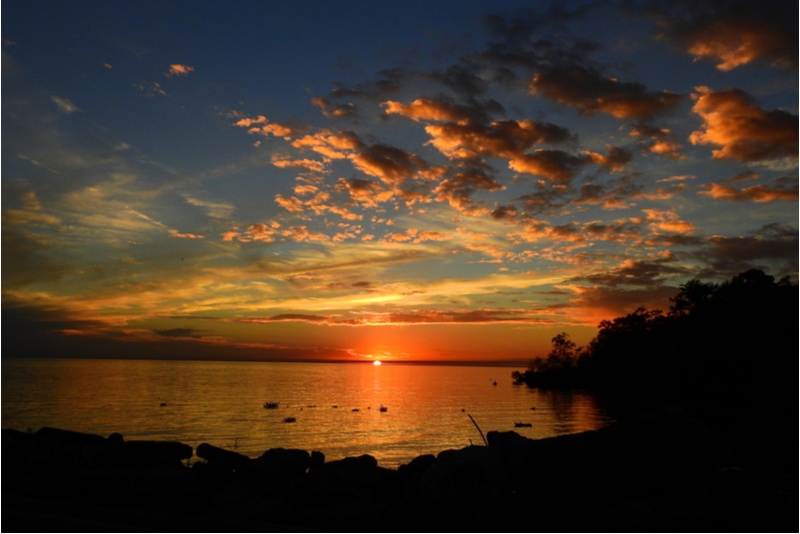 The mansion was built in 1963 and is located next to Capitol Lake. The building is characterized by its Greek Revival Style of architecture.

Due to its location, a visit to the mansion can easily be combined with visits to some of the other highlights of Baton Roque like the State Capitol or the Spanish Town.

The interior of the Governor’s Mansion is still very well-preserved and feels like a journey back in time. Visiting the mansion is only possible by calling ahead and scheduling a tour.

The historic Spanish Town is a well-preserved neighborhood that is known for its many colorful houses dating to the 19th century. There is no need to use a map for exploring the lovely area.

Simply start by heading over to the Spanish Town Road and get lost. One of the highlights is the annual Mardi Gras parade that is held here. It is the most popular parade in all of Baton Roque. The Spanish Town has been declared a U.S. Historic district. 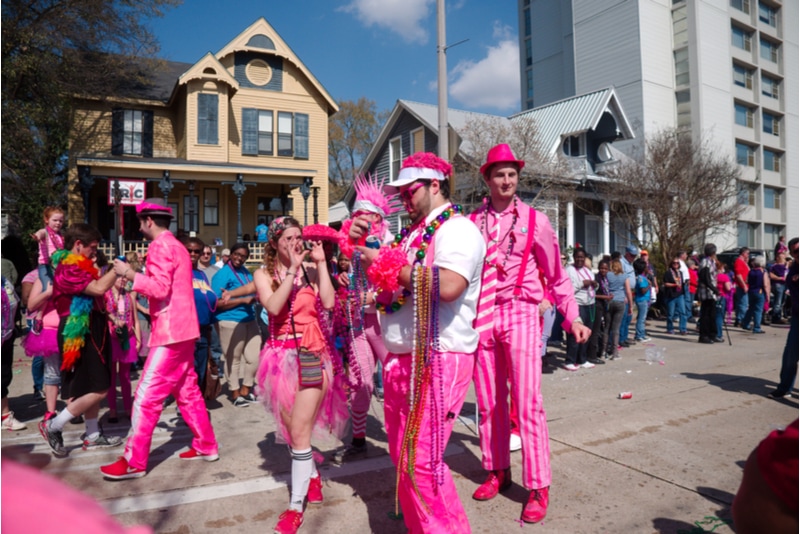 Louisiana Art & Science Museum is home to many interesting exhibitions covering a wide range of scientific subjects and all forms of art.

The permanent part of the exhibitions consists of areas featuring Ancient Egypt, the Solar System, the Planet Tower, and a gallery of the universe. The temporary exhibitions often cover interesting artists or artistic eras.

Want more recommendations on things to do in Baton Rouge? Leave a comment below! 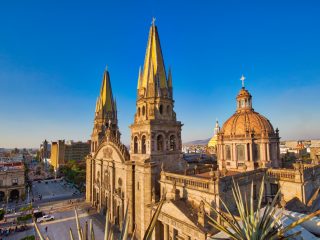 15 Best Things to do in Guadalajara (Mexico)
← Read Last Post 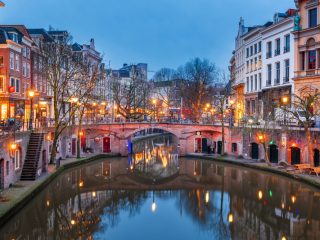