21 Thailand Fruits that you should try while visiting 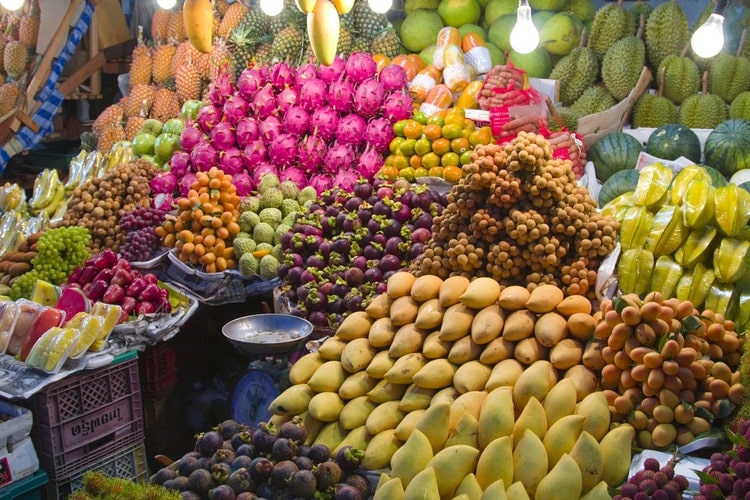 There are many fruits in Thailand thanks to its tropical nature and warm climate year round. While visiting for the first time, you will surely find some weird Thailand fruits that you have never seen before.

I loved visiting the local Thai markets, and for the first times, I kept finding new fruits that I had never seen before in my entire life. In this article, I share 21 Thai fruits that I think everyone should try while visiting!

This peculiar fruit has got its name from its resemblance of snakeskin. It is very juicy and has a sweet and sour flavor.

It’s a popular snack among Thai locals, and they particularly enjoy dipping them a mixture of salt and sugar. 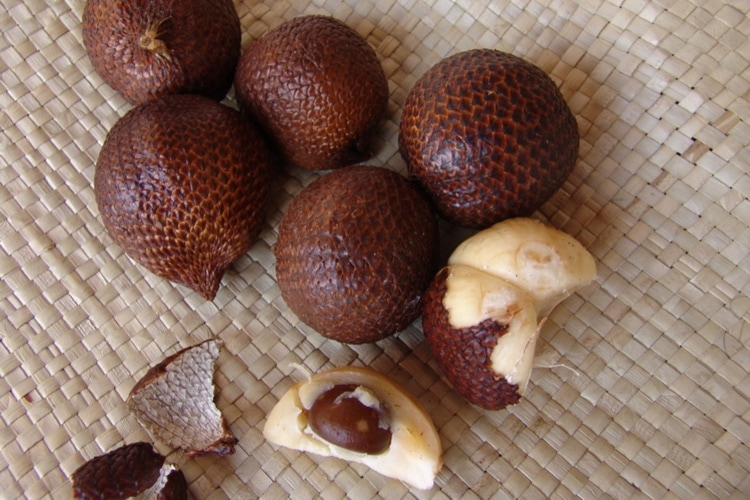 Often referred to as the Queen of fruits. Mangosteen is a native Southeast Asian plant and it has been cultivated here since ancient times.

Thailand is one of the countries with the largest plantations of Mangosteen, and during peak season from May to August you can find these in plenty in the local markets.

It is grown in the Southern and East part of the country, specifically in Surat Thani, Chanthaburi and Rayong provinces. 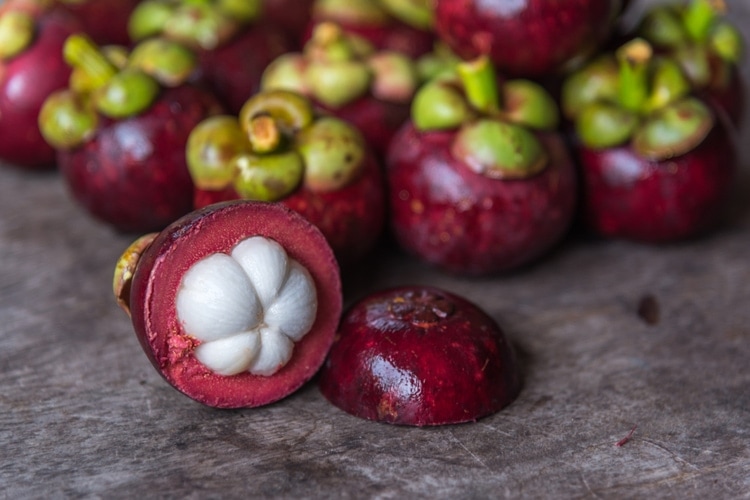 Thai mangoes are probably the best mangoes I’ve tasted so far. The season is from April to July.

Don’t miss to try Mango sticky rice, which is a popular local dessert. 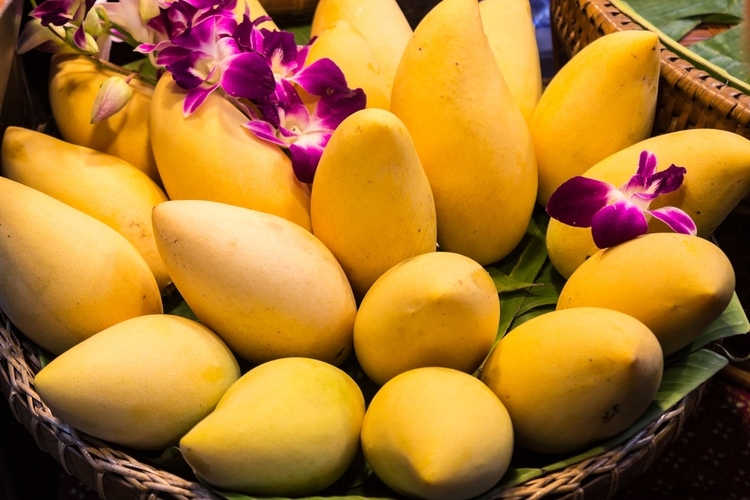 Do you like plums and mangoes? Then you shouldn’t miss this one! They are in season from April to May. 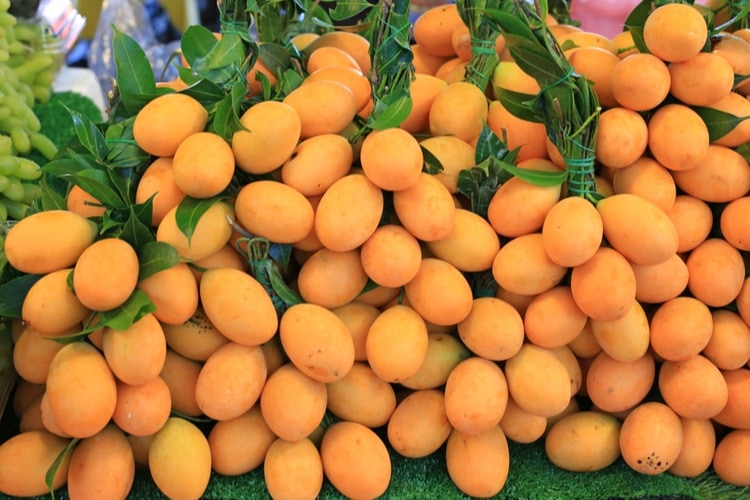 If mangosteen is the queen of Thailand fruits, the Durian is the king. It smells from far away and has a unique flavor and texture as well as an odd appearance. It has such a strong smell that it has become banned in some hotels.

Durian is grown all over Southeast Asia, and when in season, you will find these in plenty in local Thai markets. 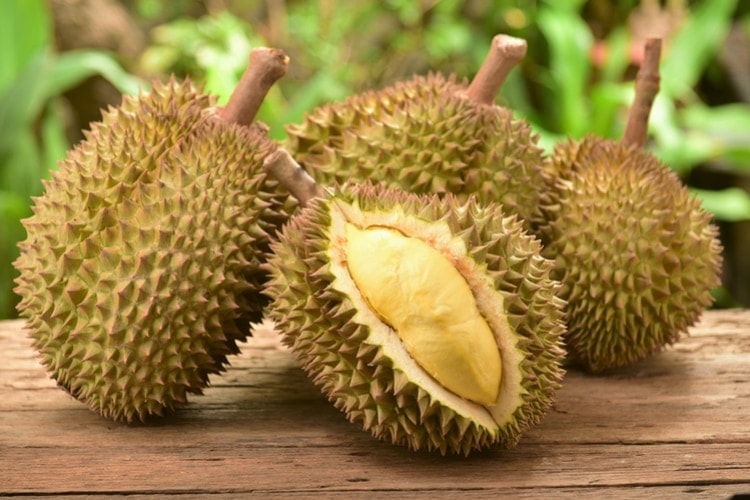 Another tropical fruit that is very common in Thailand, the Papaya. It is grown in the Southern and Eastern provinces and is available year round. They are best enjoyed ripe and fresh.

Don’t miss to try the Green Papaya Salad (Som Tam) which is a typical Thai dish. 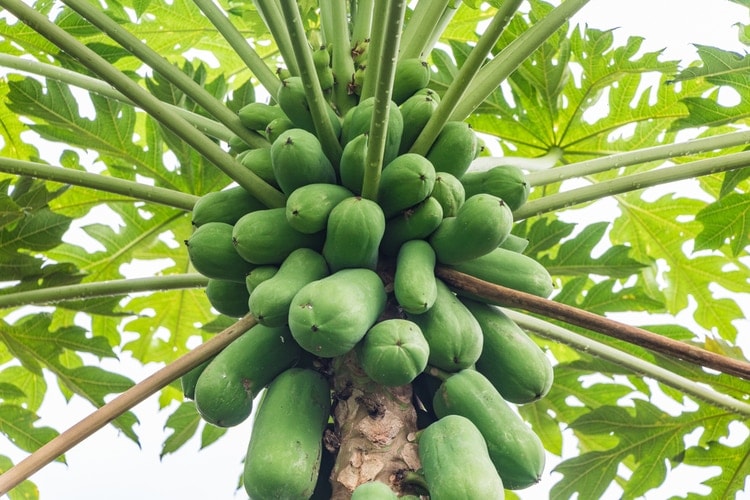 My experience of this fruit isn’t very good, but it’s still unique and a fruit that you will find in many Thai markets. Chom poo is also known as rose apple or java apple.

I won’t say what I think they taste like, but I recommend that you try them because everyone has different taste buds. 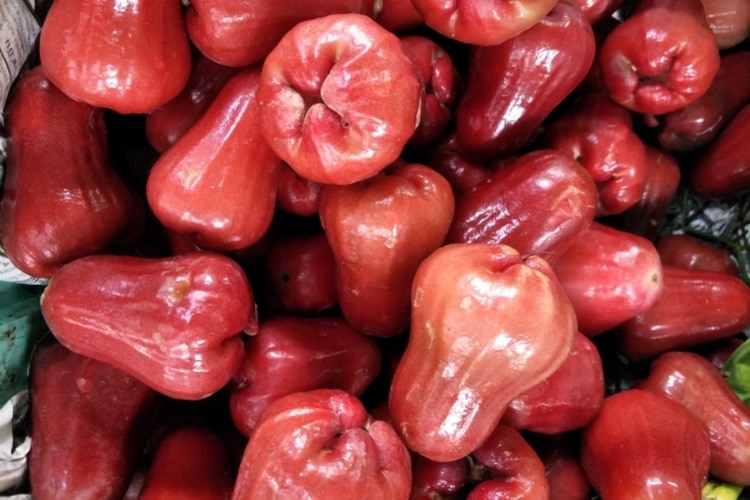 One of the weirdest fruits in Thailand, the Rambutan, commonly grown in all over Southeast Asia. It’s similar to lychee, but Rambutans are generally sweeter, creamier and richer in taste. 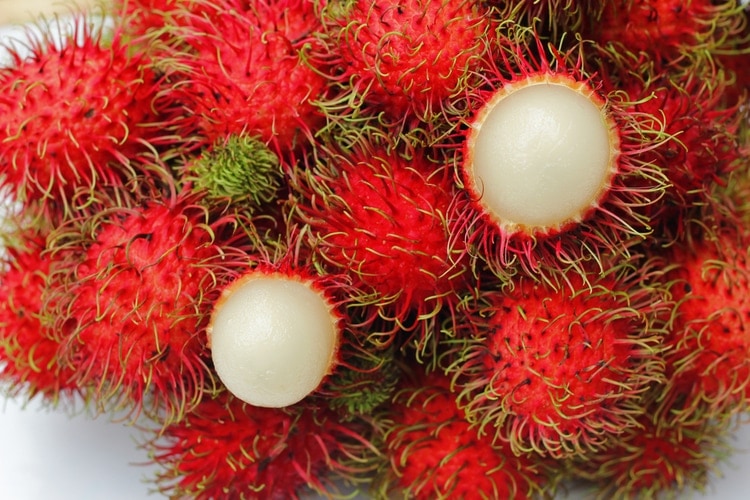 Thai Pineapples are fantastic and they are grown in plenty. The ones I’ve seen are typically smaller than regular pineapples, and they are very juicy with a nice sweet taste.

They make a perfect ingredient in the famous Thai smoothies. If you travel to the northern provinces, like Chiang Mai or Chiang Rai, you will find an abundance of pineapples. 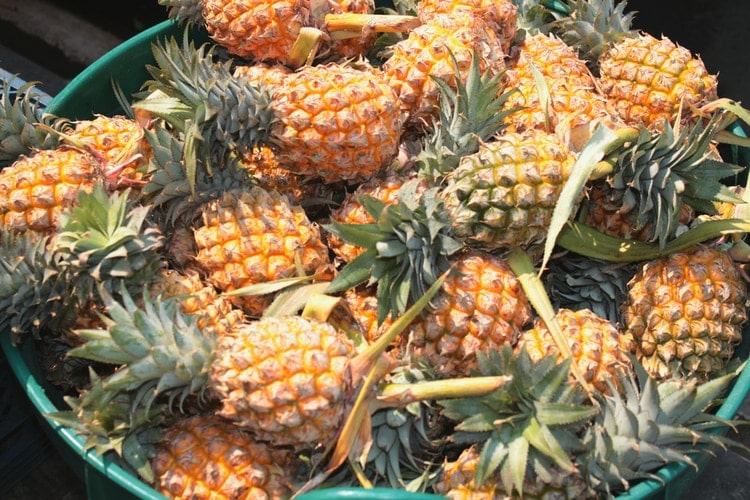 Most famous in Vietnam, but the Dragon Fruit is grown all over Southeast Asia, and it’s one of the coolest fruits in Thailand.

While they don’t look like a dragon, they could very well be something similar to how a dragon egg would look like. However, it is soft on the inside, and the most common variety is white on the inside with black small seeds.

You eat the inside of the fruit, either with a spoon or by peeling off the skin. 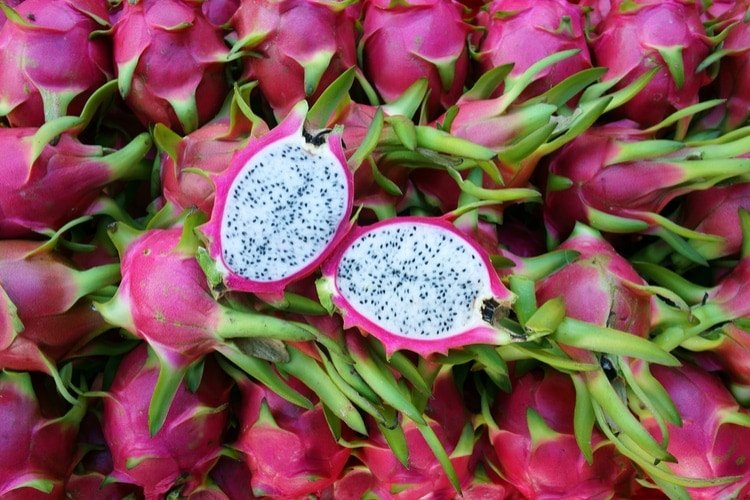 Similar to Durian, but not as bad smelling. Jackfruit has become one of the meat substitutes for many vegans around the world, and it’s available in all countries in Southeast Asia.

The high-season for Jackfruits is right after the rainy season in October and November. They can grow into gigantic fruits that weigh up to 40 kilos! The Pomelo is one of my favorite citrus fruits, and it’s grown in many countries in the world. However, the Thai Pomelo is very juicy and it’s typically available year round, but especially in October. 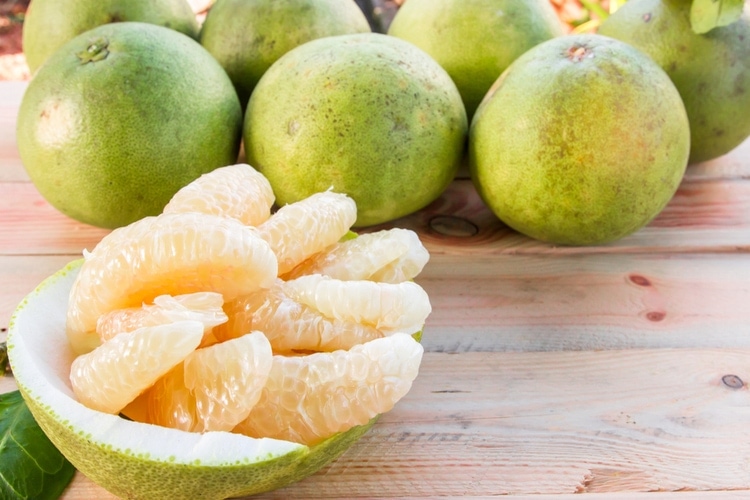 A sweet snack similar to Longan, the Langsat is famous for its health benefits. The skin can be used to repel against mosquitoes.

Basically, Langsat is a superfruit, and to eat it all you have to do is to squeeze gently and its skin will open and let the fruit out. However, it’s very popular and the demand for langsat in Southeast Asian countries is far beyond supply. 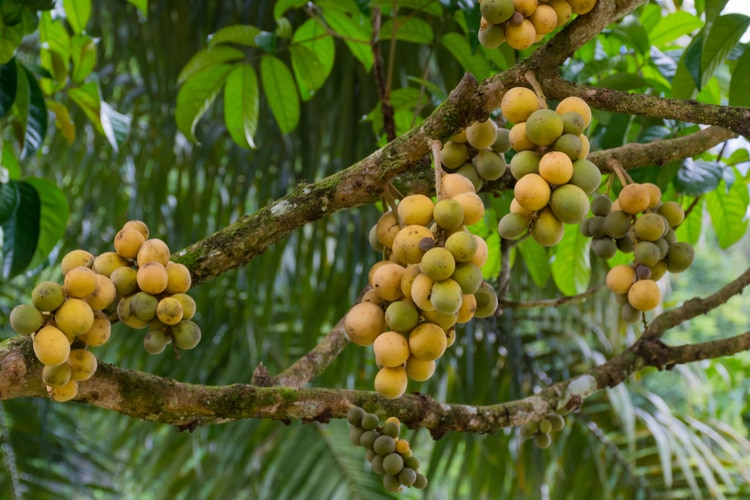 Thai bananas are smaller and sweeter than “regular” bananas. There are about 100 different varieties of bananas growing around the country, even red bananas are growing here.

You will find local bananas in the markets year round. 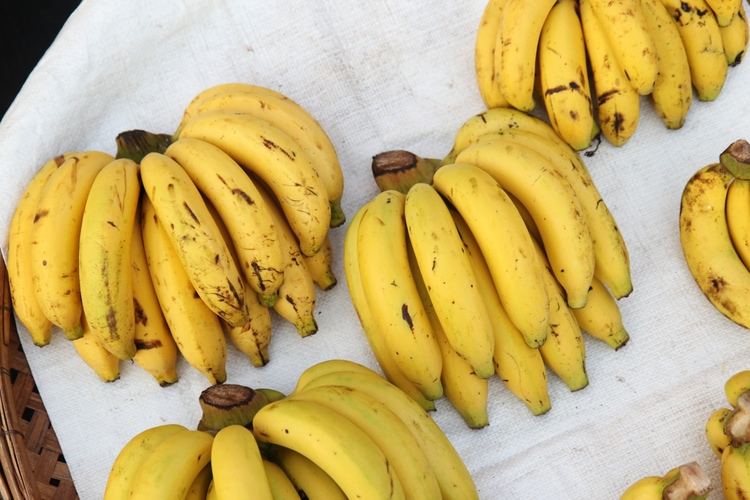 Having a fresh coconut is one of the best things about Thailand, for as little as 1 USD, visitors can relax on the beach sipping on fresh coconuts.

You can also cut them open and use a spoon to eat the inside flesh as well. 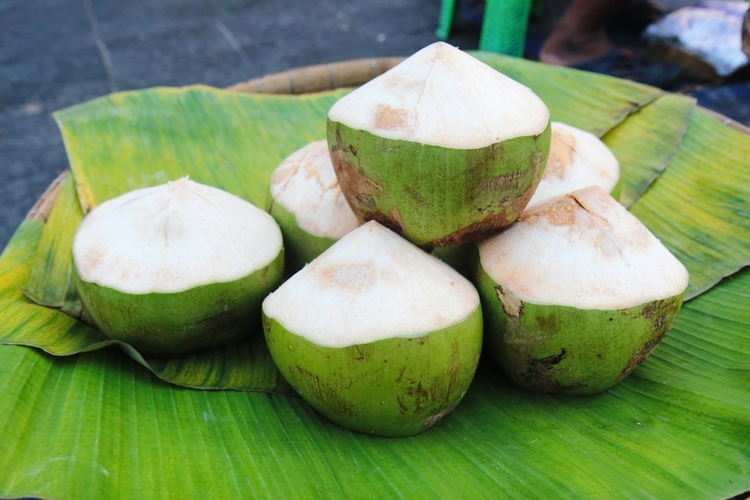 This fruit is native to Mexico, but it’s quite common in Thailand as well. The fruit has brownish skin and almost reminds of potatoes.

The main season for Sapodillas is from September to December. If you visit during this period, make sure to try a ripe and fresh Sapodilla, they are very tasty!

A fruit with Chinese origins that have become popular all over Asia. Lychee grows nowadays in Thailand as well, mostly in the Northern provinces. 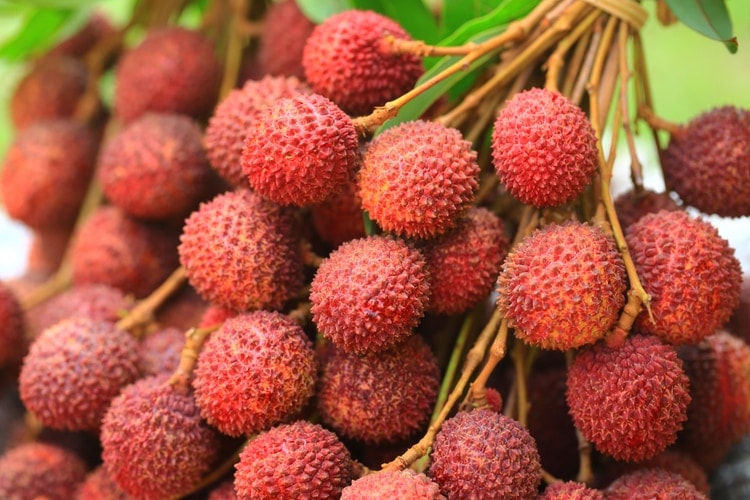 Also known as Sugar Apple. This fruit has its peak season from April to August.

To eat it, cut it in pieces, remove the seeds and enjoy! The taste is sweet and reminds a bit of pear or apple. 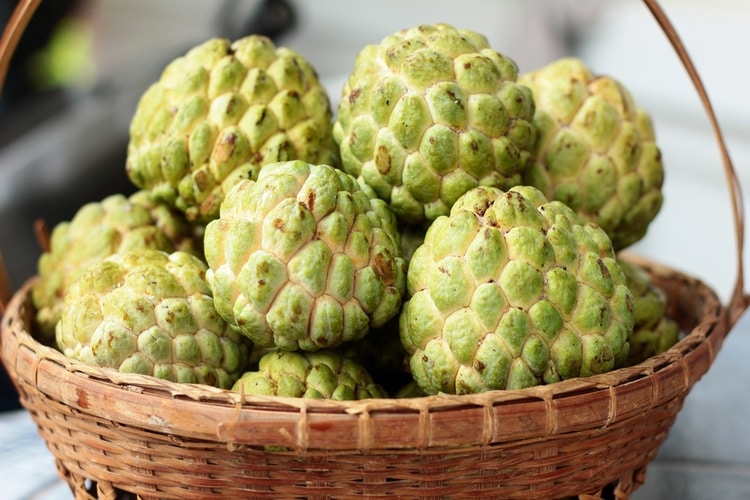 This peculiar fruit is considered to bring luck. The tree it grows on is called Lucky tree, and they are very common in Thai gardens.

Locally, the fruit is known as Mayom. 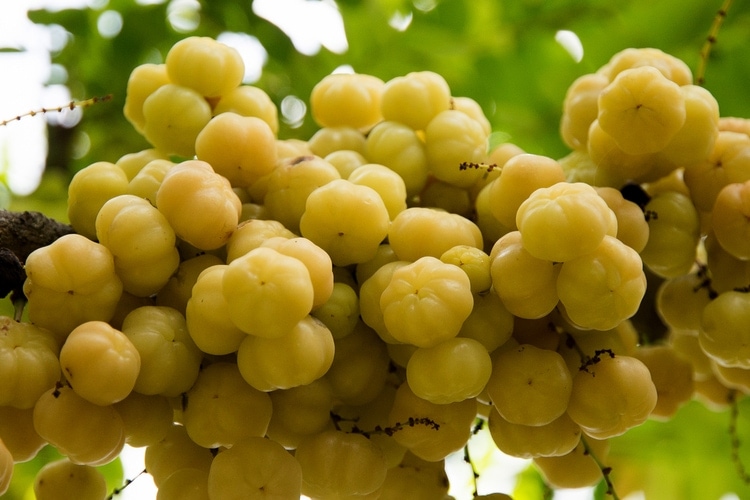 Also known as Carambola, the Star Fruit is entirely edible, and is commonly eaten in Southeast Asia. The season in Thailand is from October to December, and then they are widely available in local markets. 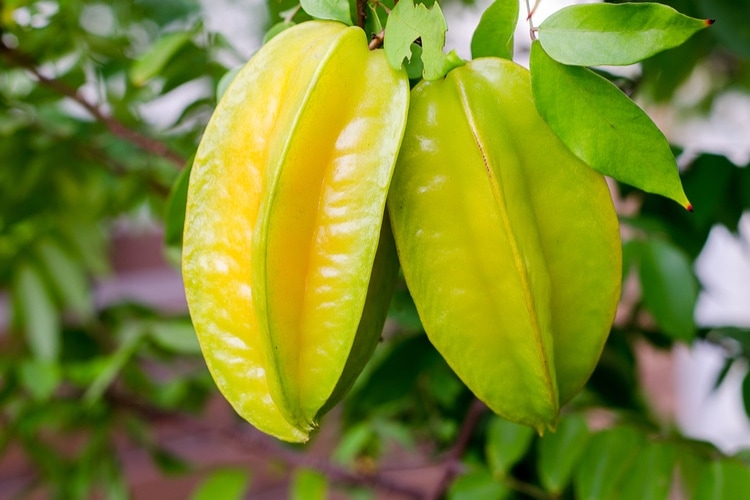 The Longan is similar to lychee and Rambutan on the inside but is typically sweeter and softer as well as easier to peel. Of all the Thailand fruits, longan is probably my favorite snack!

In Chiang Mai, there’s even a pink Longan, and you will find these readily available all over the country. 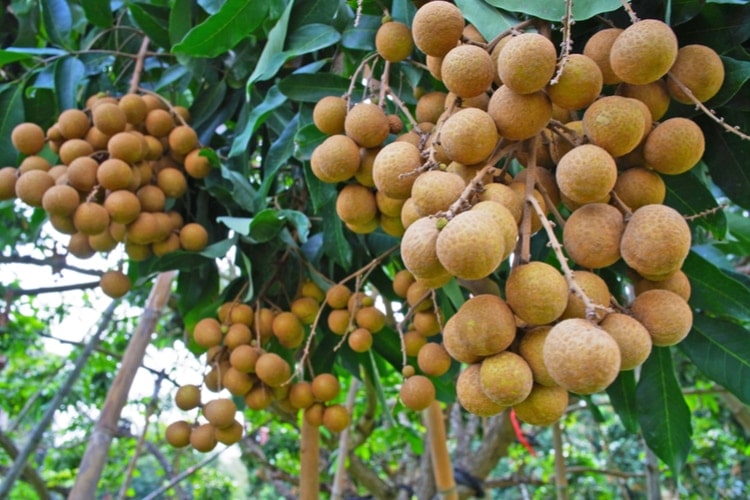 Where to buy these Thailand Fruits

The local market is the best place to buy Thai fruits. Most supermarkets will have a variety of local fruits available, but the best prices and quality can be found in the traditional markets where the locals get their fruits and vegetables.

Most cities have several local markets, and many of them open early in the morning. Avoid markets in touristy areas if possible, and don’t be afraid to haggle about prices. The more fruit you buy, the better price you can get.

It’s a common practice to haggle, and many sellers also ask higher prices from foreigners unless they know them. 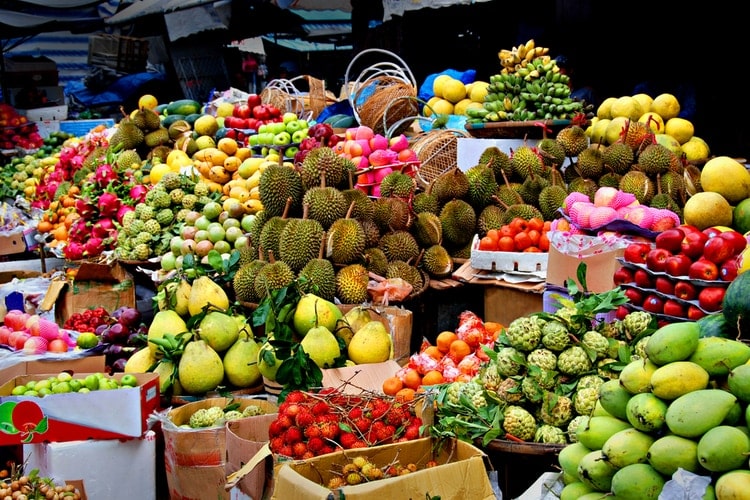 How many of these Thai fruits have you tried? Share your experience in the comment section below! 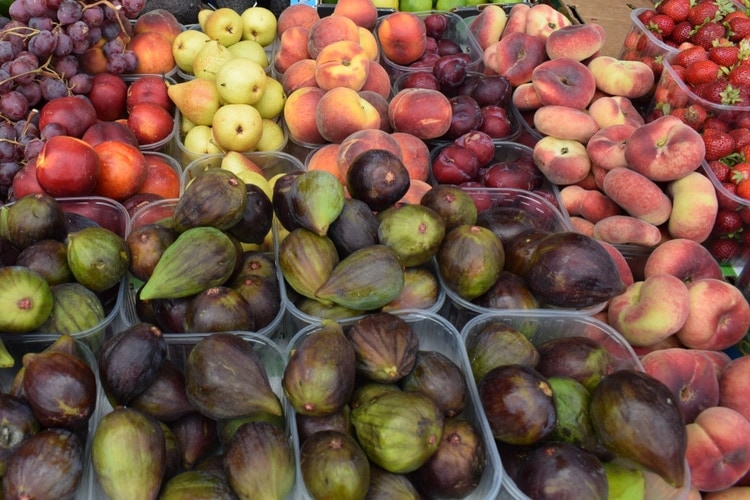 12 Maltese Fruits That You Should Try
← Read Last Post 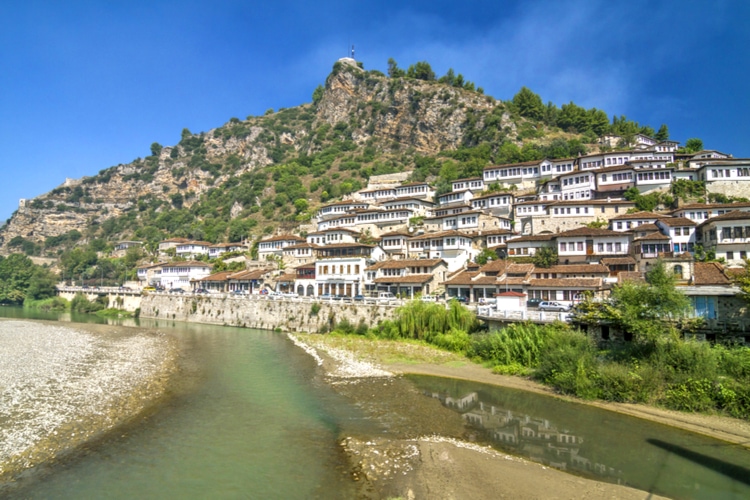