Schönbrunn Palace in Vienna was once the main summer residence of the Habsburg rulers, and when the monarchy fell in 1918, the property was turned into a museum and opened to the public. Today over 2 million visitors step foot inside the palace each year!

The Imperial Tour grants access to 22 rooms and lasts approximately 30-40 minutes. Get ready to experience the luxury of the Great Gallery, the Chinese Cabinets, and Emperor Franz Joseph’s private suite. This is a self-guided tour.

The Grand Tour grants access to 40 rooms and lasts approximately 50-60 minutes. Besides the staterooms and private apartments, you’ll also see the 18th-century interiors of alternate rooms. Choose between exploring on your own or with a guided tour group.

The Winter Pass grants access to the Schönbrunn Palace (where you’ll take the Grand Tour), the Zoo, the Desert Experience House, and Palm House.

The Sisi Ticket grants access to the Schönbrunn Palace, Vienna Hofburg, and the Imperial Furniture Collection. 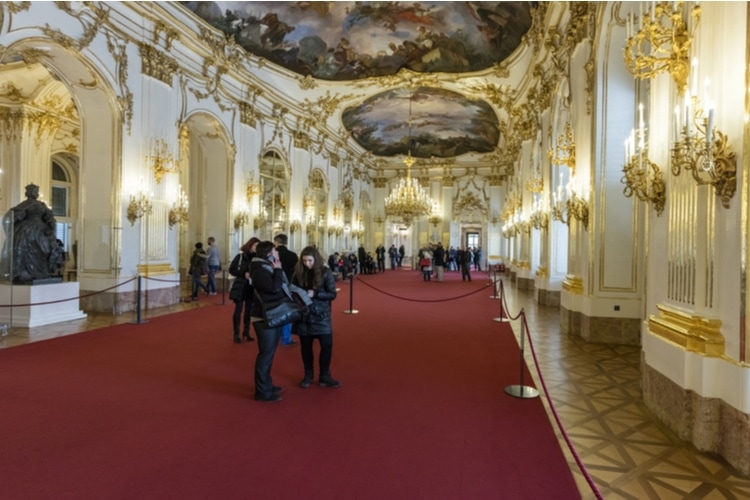 The palace is open daily, including on bank holidays, at the following times:

The last admission to the palace is 45-minutes before closing time.

The park is open daily, including on bank holidays, at the following times:

The last admission to all attractions in the park is 45-minutes before closing time. Note that the Privy Gardens/ Orangery Garden, Maze, and Fountains all have separate opening times throughout the year which can be found here. 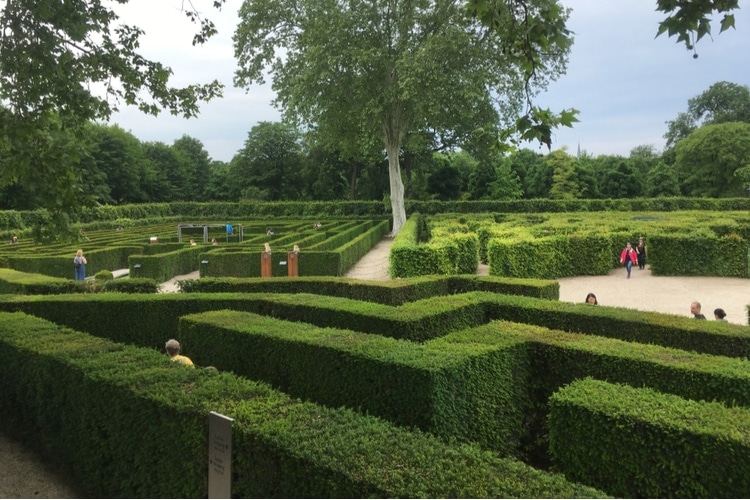 Declared a UNESCO World Heritage Site in 1996, Schönbrunn Palace is one of the most visited attractions in Vienna. The opulent and striking Baroque building was designed by architects Johann Bernhard Fischer von Erlach and Nicolaus Pacassi in the 17th century after being commissioned by Emperor Leopold I.

The architects were instructed to build a hunting lodge for the emperor’s son, and over the centuries, the building transformed into a residential imperial palace. The current palace is built in Rococo style and has a total of 1441 rooms.

Today the palace welcomes visitors with open arms to explore the sprawling gardens and the intricate staterooms inside. Visitors can choose between self-guided tours of the rooms, audio-tours, and guided tours or opt to simply wander the gardens for free.

Walk in the footsteps of the Habsburgs and Emperor Franz Joseph, admire the works of the Great Gallery, and climb the famous Blue Staircase. It was the main summer residence of the Habsburg rulers and Franz Joseph himself was born in the palace.

The Schönbrunn Palace was preserved as a museum in 1918 after it became the property of the Austrian Republic. For a brief time after World War II, it was used as the headquarters of the British Military Garrison, before it received the status as a museum again in 1955.

Since 1992 both the Schönbrunn Palace and Gardens are owned and administered by Schloss Schönbrunn Kultur-und Betriebsges.m.b.H, which is owned by the Republic of Austria.

Originally the dining room of the hunting lodge built for Joseph I, the Blue Staircase was remodeled by Nikolaus Pacassi around 1745 into a ceremonial stairway when it was converted into a residential and family palace for Maria Theresa.

The imperial apartments of Maria Theresa and Franz I Stephan, and the Franz Karl Apartment, which was occupied by Franz Joseph’s parents, Archduchess Sophie and Archduke Franz Karl.

Roms occupied by Emperor Franz Joseph and his wife Elisabeth in the west wing, which are furnished in nineteenth-century style

Found in the central section of the palace.

The garden of Schönbrunn Palace has been open to public visitors since 1779 and extends for 1200 meters from east to west and around 1 kilometer from north to south. The park includes attractions such as the Privy Garden, the Maze, and the Orangery Garden.

A large greenhouse with plants from all over the world that has been open since 1882. 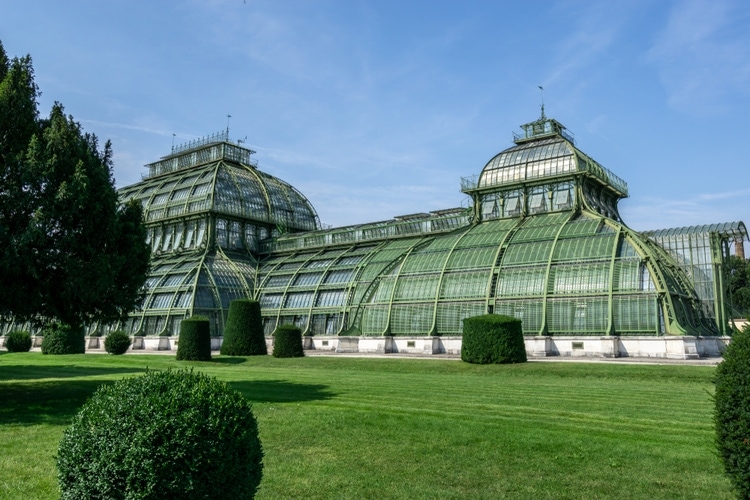 How to get to Schönbrunn Palace

If you’re coming from Vienna International Airport take the A4 motorway into the city and continue on the A23 southbound. Parking isn’t available on the palace grounds but visitors can make use of nearby parking lots (though it’s recommended you arrive by public transport).

The underground line U4, the tram lines 10 and 60, and the 10A bus all head to the palace and those using these routes should alight at the stop named ‘Schönbrunn’.

The high season in Vienna runs from April to September, with July and August being the peak time for tourists. If you’d like to avoid the crowds, try visiting in the shoulder seasons and consider getting to the palace as the gates open at 8am.

Is Schönbrunn palace free to enter?

You can enter the Palace Park free of charge during opening hours. If you wish to visit the special attractions at Schönbrunn, such as the Privy Garden, the Orangery Garden or the Maze, you will need to purchase individual admission tickets.

Is it worth going inside Schönbrunn Palace?

Yes! The building’s interior is quite spectacular and is well worth seeing, as are the gardens.

How long does it take to tour Schönbrunn Palace?

It’s recommended you allow 1 to 1.5 hours to explore the palace and allow extra time to enjoy the gardens.

Can you take photos inside Schönbrunn Palace?

Photography is not permitted inside the palace however you make take photos in the grounds and gardens.

Will I have to wait for admission?

If you pre-book your tickets online you won’t have to wait in line when you arrive. During high-season it is recommended to purchase tickets in advance in order to avoid queues.

Are dogs allowed in the palace or the park?

No, dogs are not allowed to enter Schönbrunn Palace.

Can I visit Schönbrunn Palace in a wheelchair?

Yes, the palace and its display rooms on the third floor are all wheelchair friendly. Handicapped parking is available (3 spaces) at the main gate.

What languages are the audio guides available in?

The guides are available in 16 different languages.

Do you have more questions before visiting Schönbrunn Palace in Vienna? Leave a comment below! 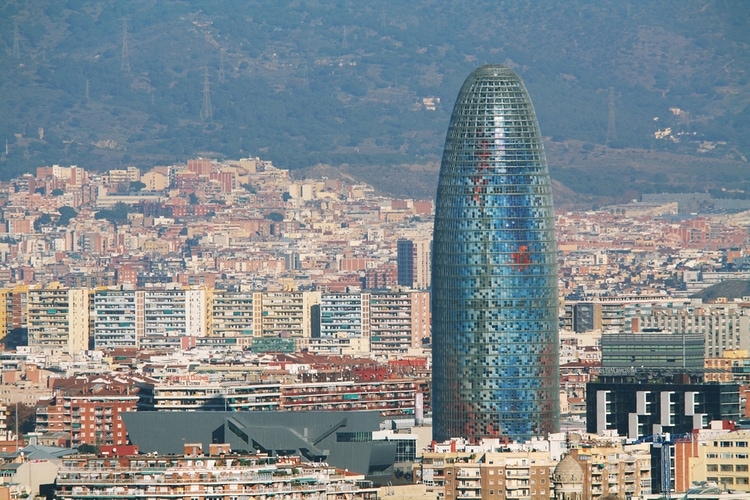 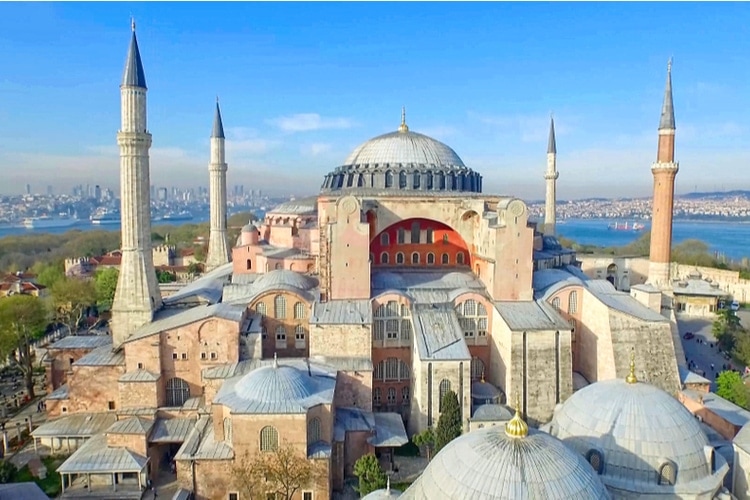