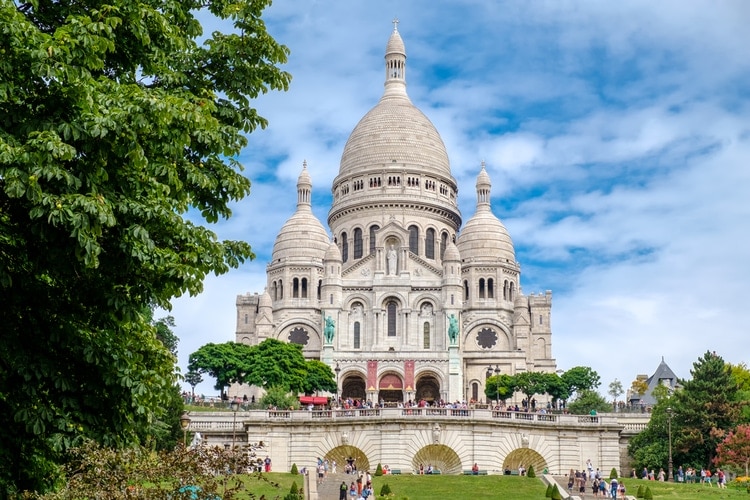 The Sacre Coeur, also known as the Basilica of the Sacred Heart of Paris, is a Roman Catholic church perched high on the hill of Montmartre in the city’s 18th arrondissement.

It is one of the most famous landmarks in Paris and one of the most beautiful churches in Europe. Here’s a complete guide with information for visitors, including opening hours, entrance fees, history and facts about Sacre Coeur.

The Basilica is open daily between the hours of 6 am and 10:30 pm. However, note the below restrictions:

The Sacre Coeur is one of the most iconic monuments in Paris and is the second tallest structure in the city. The church was designed by Paul Abadie, under the approval of the Archbishop of Paris Cardinal Guibert, in Romanesque-Byzantine style.

Abadie took his inspiration from buildings like Saint Marks church in Venice and construction work began in 1875. The Basilica was completed by 1914 and ready for its consecration, however, WWI began and the consecration was put on hold until the 16th of October 1919. 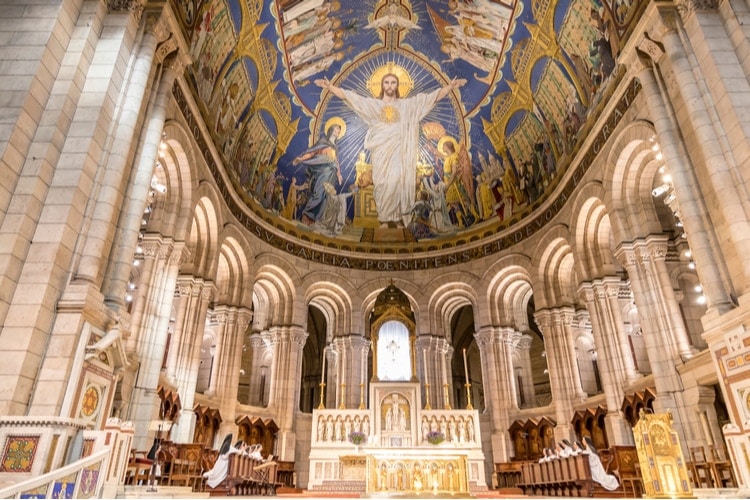 Inside the building, you’ll find the largest mosaic in France (it measures around 480m2), a lavishly decorated crypt, and a dome that offers visitors 360° views of Paris.

The Basilica is also home to the largest bell in France! The bell, which is found in the bell tower and weighs 19 kilograms, was transported to Montmarte by 28 horses from Annecy, over 300 miles away. 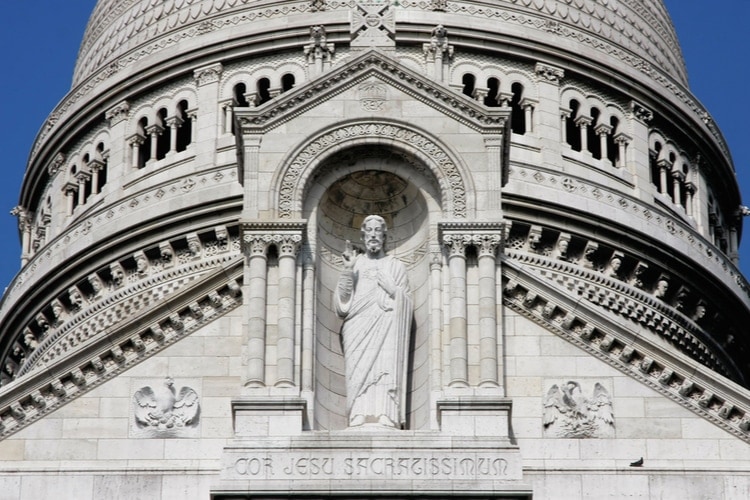 Other features include a grand organ that was recognized as a national monument by the French State in 1981, bronze chapel doors depicting Christ’s last supper and bricks engraved with the names of French citizens who donated to the construction of the Sacre Coeur.

Today visitors travel from far and wide to marvel at the beauty of the Basilica, which still remains a popular place of pilgrimage. Thousands of tourists visit every year to pay their respects to the Heart of Christ and to enjoy spectacular views out over Paris from the second-highest point in the city. 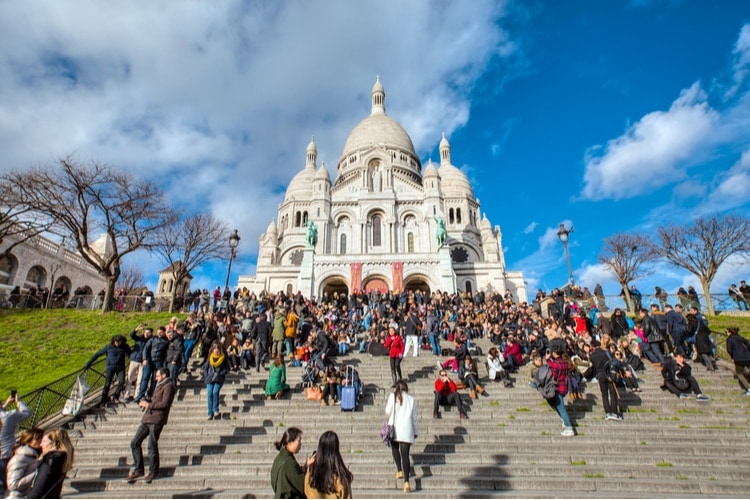 Visitors can enter and explore the Basilica for free.

Access to the Dome is found outside the Basilica on the left. There are 300 steps to the dome and visitors must purchase a ticket before heading up.

Home to the tombs of several Cardinals. 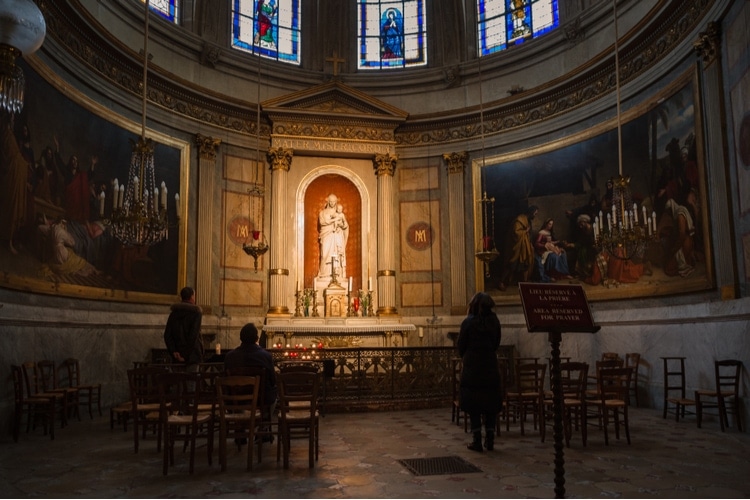 How to get to Sacre Coeur

From both, it’s just a 5-minute walk to the bottom of the Basilica where you can choose between climbing the 300 steps to the top or ride the funicular.

Bus number 40 and number 54 service the Montmartre area and have bus stops just steps from the base of Sacre Coeur.

Once you reach the bottom of the Basilica, take the funicular to the top of the hill. The journey takes only 90 seconds but you may have to queue at peak times. 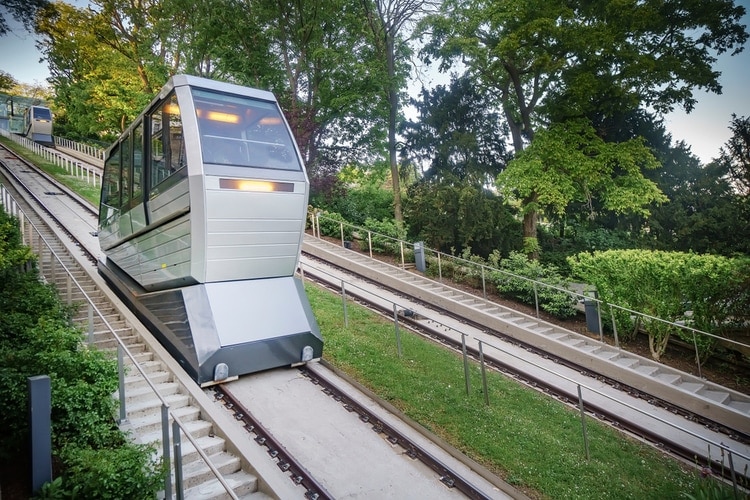 When you’ve finished exploring the Sacre Coeur, make sure you explore the surrounding area around Montmartre as it’s brimming with points of interest, quaint restaurants, and numerous museums. The following attractions are all within a 30-minute walk of the Sacre Coeur:

The least crowded visiting times are between the hours of 7am-11am and 7pm-11pm. On warm evenings, Parisians and tourists alike tend to gather on the steps of the Sacre Coeur to watch the sun go down over the city and this is one of the most enjoyable times to visit. 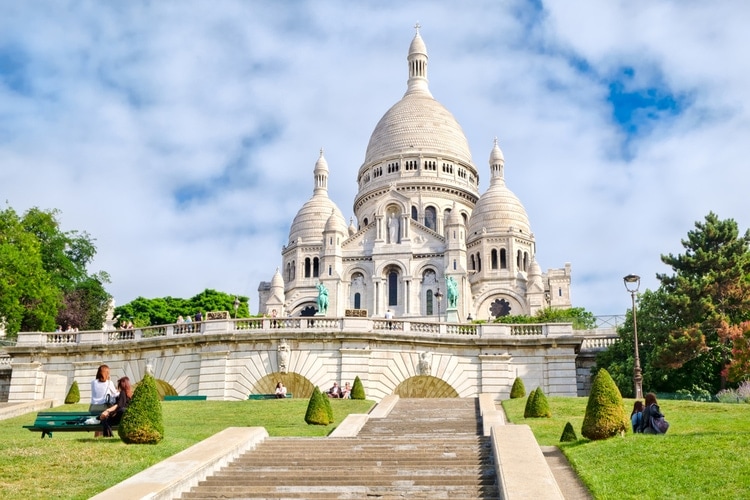 Can I take photos inside the Basilica?

No, photography and videography are not permitted. However, you can take photos of the exterior.

How much time do you need at Sacre Coeur?

1-2 hours is a good recommended amount of time to enjoy the exterior and interior of the Sacre Coeur.

How much does it cost to get into Sacre Coeur?

Going inside the church is free. However, to get to the top of the Sacre Couer Basilica the fee is 8 euros.

How many steps are there to the Sacre Coeur?

There are 300 steps leading up to the Sacre Coeur!

Is there parking at the Sacre Coeur?

There is no parking at the church, and it’s not recommended you arrive by car as there are multiple public transport options available.

Do you have more questions before visiting Sacre Coeur in Paris? Leave a comment below! 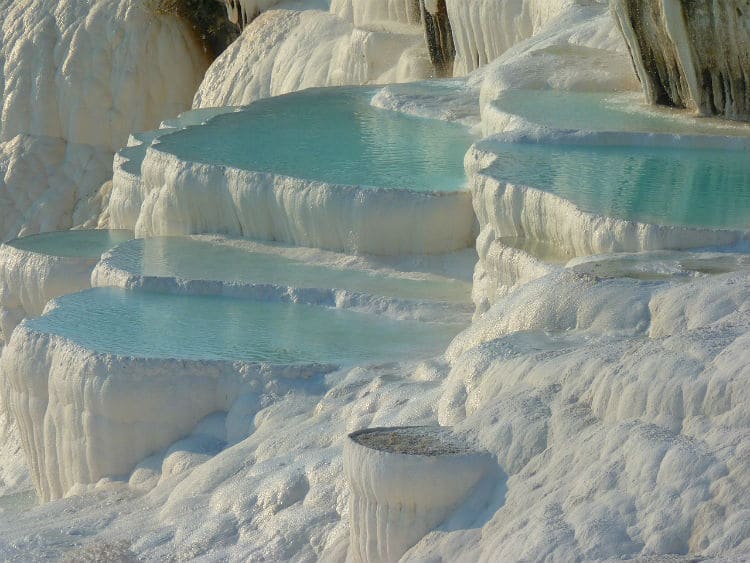 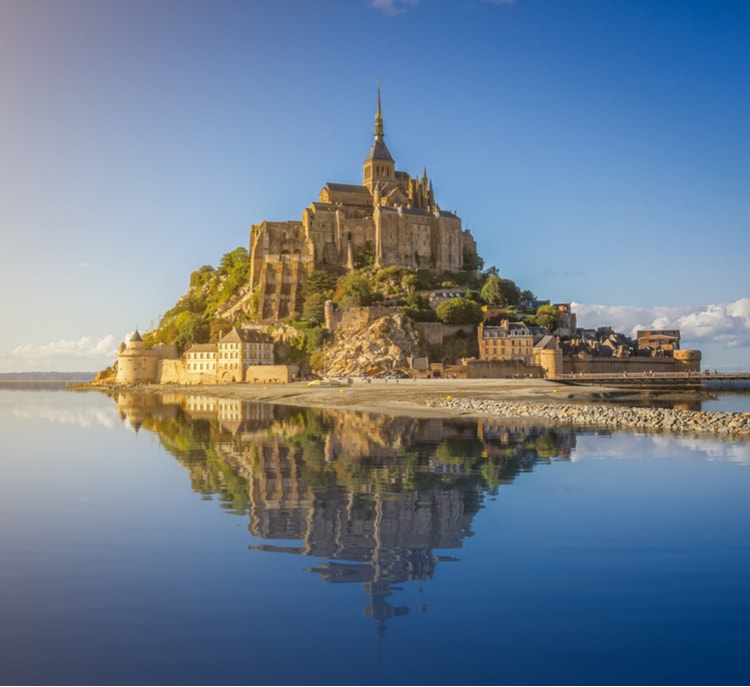