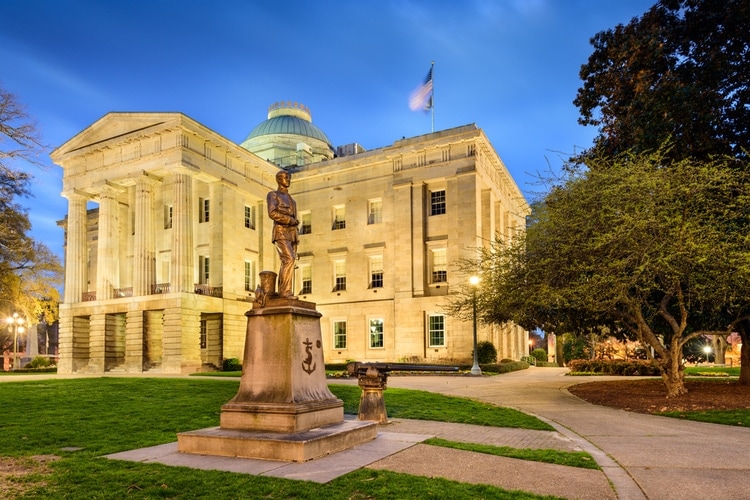 Want to find the best places to visit in North Carolina? Here’s an updated guide for 2020 with interesting and beautiful destinations to include on your North Carolina Itinerary.

Known as the birthplace of flight, North Carolina is in the list of top 10 most visited states in America. It impresses travelers with a lot of unique experiences around every turn.

Home to storied mountains, distinctive beautiful sights, alluring islands lining the Atlantic coast and charm-filled small towns with an artsy vibe, North Carolina has something to offer to all types of travelers.

The position of the state is among the wettest in the country, with numerous lakes and boundless marshlands in the coastal area. Packed with many historic attractions as well, North Carolina is a place where the country’s first documented gold discovery took place and where you can find America’s largest privately-owned house.

With over ten-million annual visitors, The Great Smoky Mountains is America’s most visited national park. Stretching across Tennessee and North Carolina and beyond Blue Ridge and Appalachian mountain ranges, it reaches towering heights of nearly 7000 feet.

All this together encompass 500,000 acres of paradise for true nature lovers. If you’re looking for outdoor adventures, the Great Smoky Mountains is one of the most beautiful places to visit in North Carolina. 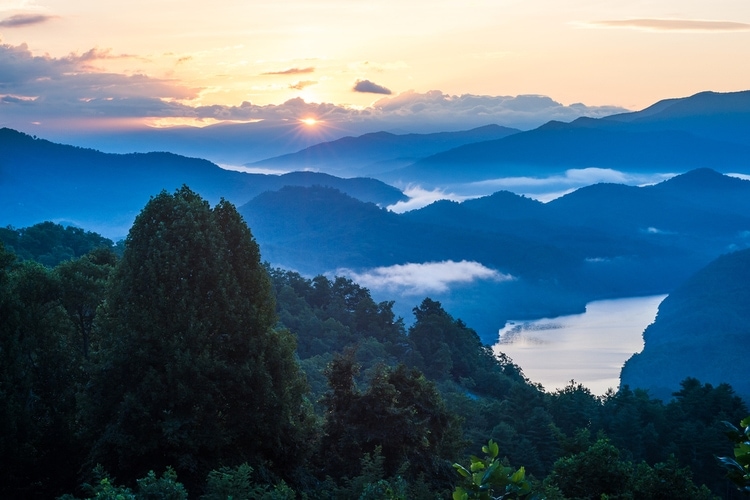 During the hot summer days, what draws people to the park the most is the lake which is a perfect swimming area and weekend destination. 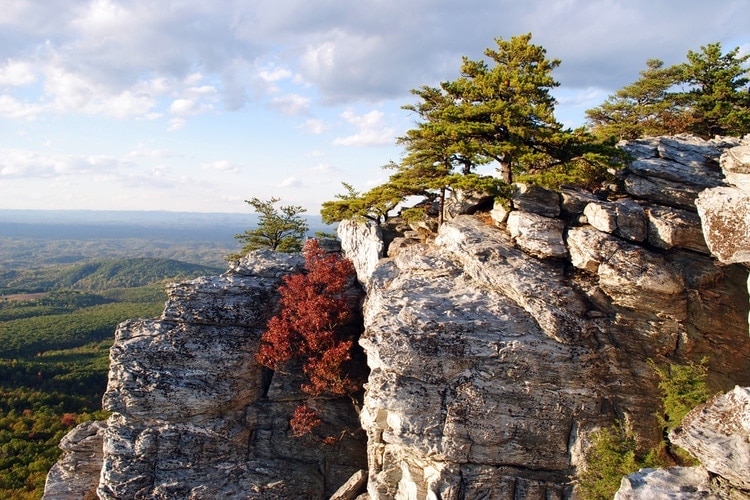 The mountain city of Asheville with its almost always perfect weather offers countless activities, including some of the must-see spots of the state.

This laid back city with a unique bohemian vibe represents an interesting mix of hipster coffee shops, award-winning dining, outdoor adventures, and the densest amount of breweries compared to anywhere else in the country.

One of the famous highlights here is the Biltmore Estate, which is the largest privately-owned home in America. It was built by railroad baron George Vanderbilt in the late 19th century. Today it is almost always full of visitors despite its relatively expensive entrance fees. 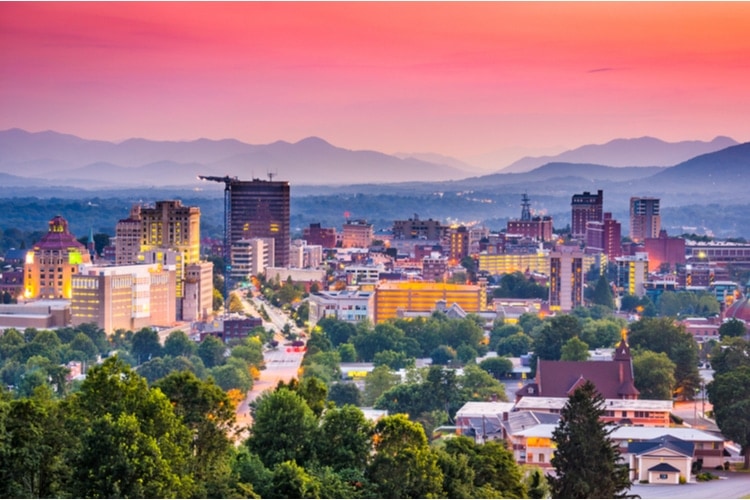 Nearly 25 miles away from downtown Asheville you can find one of North Carolina’s best outdoor destinations – Chimney Rock State Park. The highlight of the park is the 535-million-year-old monolith rock after which the Park is named.

The park offers some of the best varieties of hiking in North Carolina. Other highlights here are 75-mile panoramic views overlooking Lake Lure and nearly 400 feet high waterfall, which is one of the highest east of the Mississippi River. 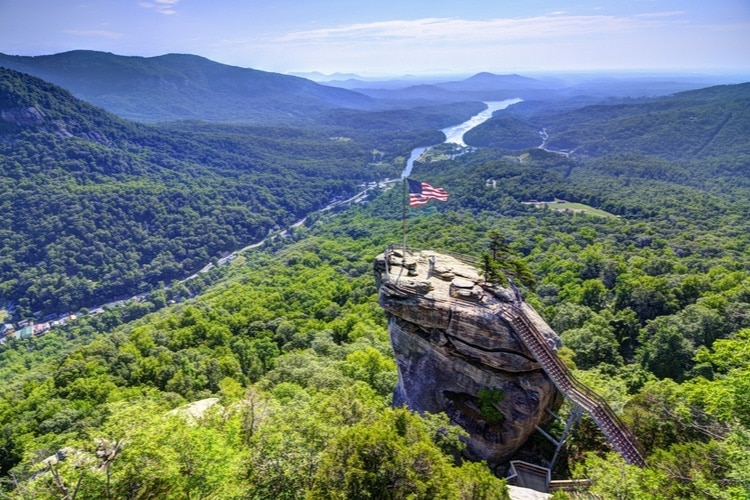 This 469 miles long parkway stretches long the stunning views of Appalachia and with its scenic views offers an experience unlike any other. It borders both the Great Smoky Mountains and Shenandoah National Park and is known as America’s most favorite drive.

Stanley Abbott, the designer of the famous roadway, was Influenced by the design of New York’s Central Park and intended to create a park-like atmosphere that could be admired through a lazy relaxed driving. Today it’s recognized as a National Parkway and All-American road. 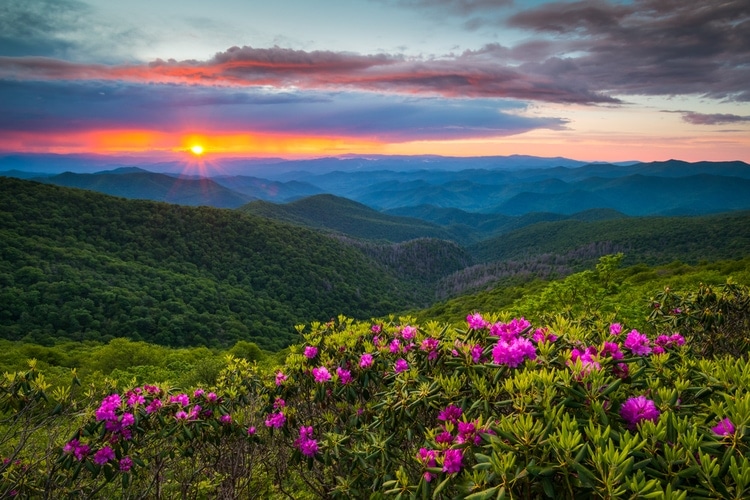 A beautiful part of southeastern North Carolina, Wilmington, is a port city and a destination with something for everyone. This vibrant riverfront city is the most accessible coastal area in the state.

The historic district of Wilmington is known for its beautiful 19th-century architecture, brick-lined streets, annual festivals, such as Riverfest and the famous North Carolina Azalea Festival.

However, there are many other attractions brings crowds of tourists here every year. Popular excursions of Wilmington are the beaches, the Civil War site, an award-winning aquarium, and more. 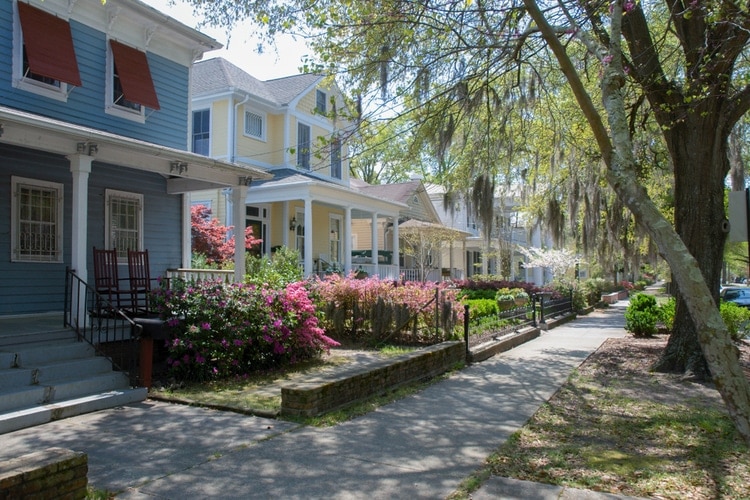 This 130-mile stretch of barrier islands is not only a set of pristine beaches and fanciful towns but also home to America’s first colony, is the nation’s first seashore, and the place where the Wright brother’s first flight took place.

Yes, here is where after years of experimentation they achieved the first successful airplane flight in 1903.

Today, tourism is the top industry here and over 5 million visitors are hosted in Outer Banks annually. Famous attractions include Cape Hatteras National Seashore, The Lost Colony, and coastal lighthouses 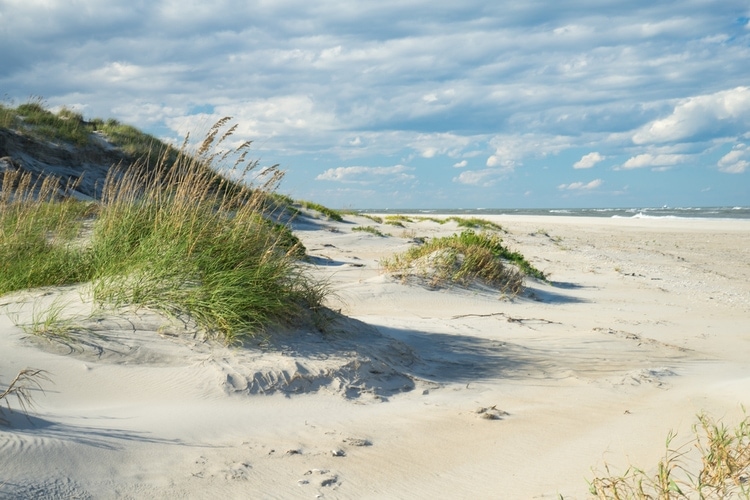 With its epic views of impressive waterfalls and the rugged-walled gorge, Linville Falls is perhaps the most famous waterfall in the Blue Ridge Mountains. This landmark is protected by the 12,000-acre Linville Gorge Wilderness Area.

The stunning three-tiered falls over the gorge are accessed by hikes through the trails near the Linville Falls Visitor Center. Linville Gorge is also the deepest rugged gorge in the eastern US. 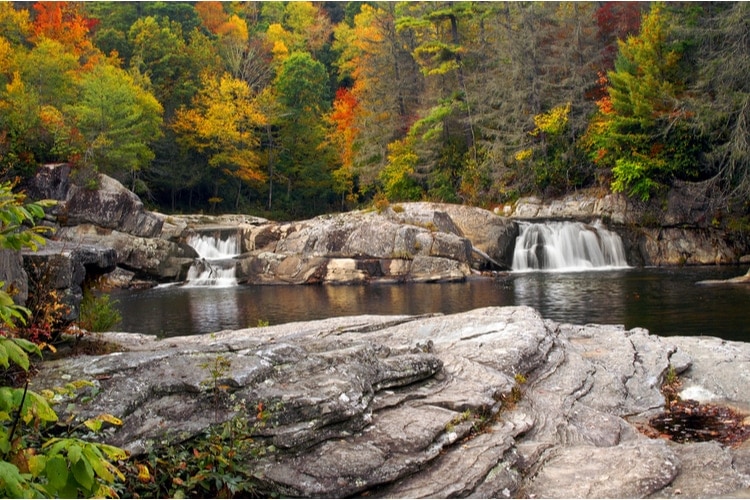 New Bern was North Carolina’s first capital, which is also home to the famous Tryon Palace – the historic spot where the American independence was colonized and the state of North Carolina was born.

This coastal city is also renowned for its scenic waterfronts in every direction, also a wide variety of historical structures, museums, and parks. Another noteworthy fact about New Bern is that it’s the birthplace of Pepsi Cola! 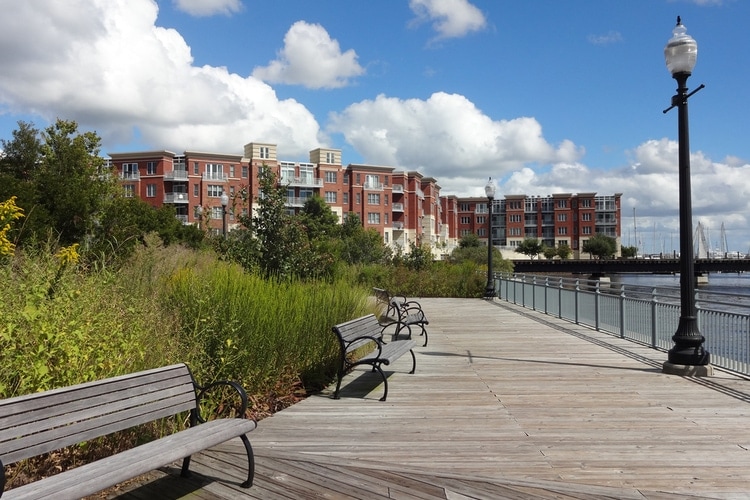 Contoured by the Atlantic Ocean from the north and south and Cape Fear River from the west, Bald Head Island is a secluded island destination with a limited population and one of the cleanest beaches in North Carolina.

Despite being a spot for exclusive and elite travel, perfect undeveloped site of the maritime forest and many other natural attractions.

It also has an interesting history, as it was home to small British Fort during the Revolutionary War and also a Confederate home base for shipping items of need during the times of Civil War blockade.

There are very few cars on the island, and most people are getting around by golf carts, bicycles or foot. The Bald Head Island is one of the best places to visit in North Carolina for a relaxing vacation. 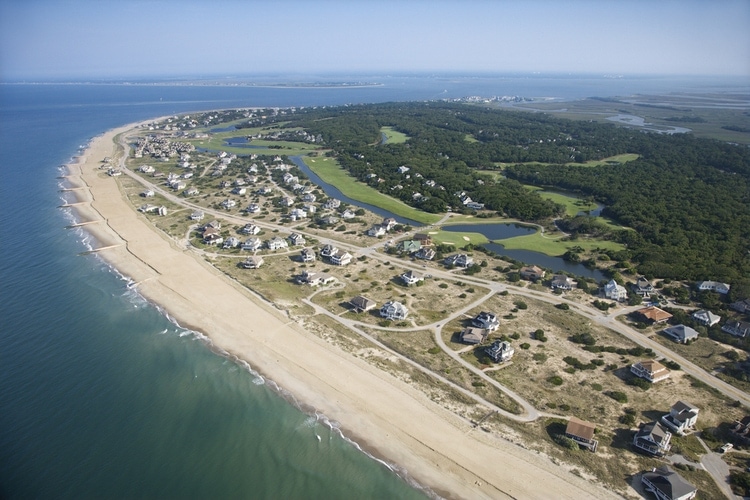 The Battleship North Carolina is docked across the river from downtown Wilmington and is a historical ship that remained from World War II. It’s the first boat of its type built for the US Navy.

Taking a self-guided tour on this heroic ship is a historic adventure and features crews’ stories that make you feel the part of their daily life in times of the great war.

The battleship also serves as a memorial for the 11,000 North Carolinians who passed away during WWII. It is open daily for its visitors and offers an experience you don’t want to miss. If you want to learn more about war history from WWII this is one of the best places to visit in North Carolina. 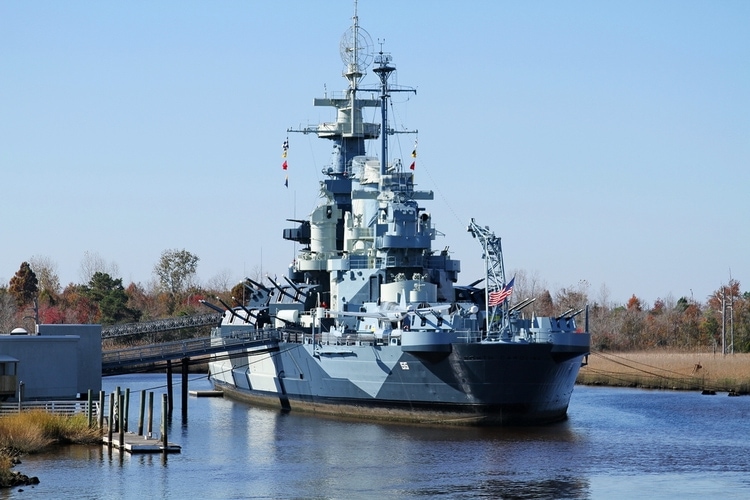 The Gem of the South – Charlotte is North Carolina’s largest city and is packed with lots of attractions such as historical sites, famous churches, and religious sites, museums, the only motorsports hall of fame of its kind, and a lot more.

The city is also named as the Queen City and is always full of tourists, especially those with a need for speed, because of the famous Charlotte Motor Speedway and the NASCAR Hall of Fame.

Charlotte city has a unique Southern charm and energetics and is also a great destination for traveling with family and kids, as it has many attractions for kids such as amusement parks, animal sanctuaries, and others. 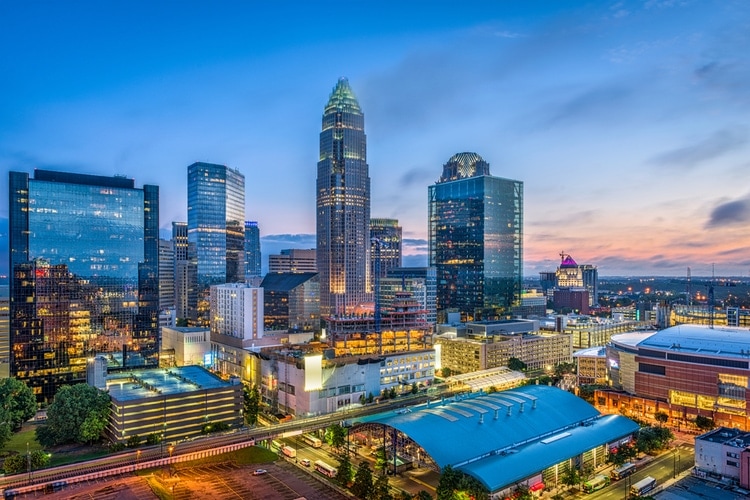 Just a little off the Blue Ridge Parkway you can find the Grandfather Mountain, which is 5946 ft high and is the tallest peak in the Blue Ridge Mountain range.

It’s a privately-owned non-profit preservation area and one of North Carolina’s main natural attractions. Climbing the rocky summit of the mountain is a perfect opportunity to admire dramatic vistas.

Grandfather Mountain is home to the famous Mile-High Swinging Bridge. Here you can also get an up-close perspective of the diverse wildlife and nature of the area. 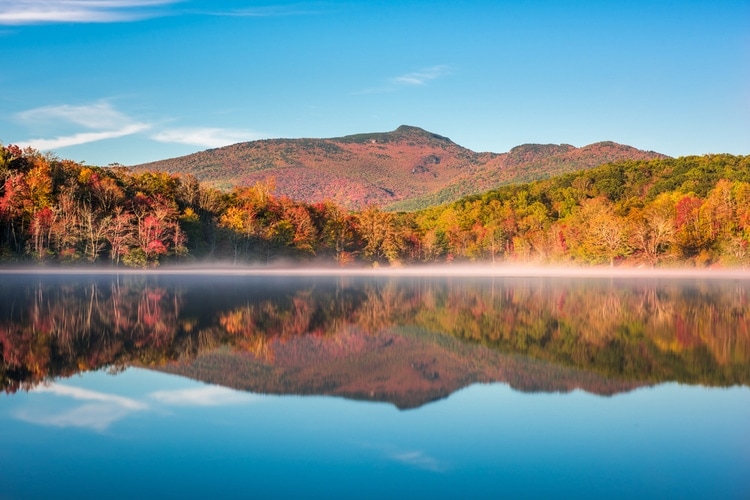 Nearly 27 miles away from downtown Asheville you can find one of the jewels of North Carolina – Lake Lure, which is also just 18 minutes far from the famous Chimney Rock.

The lake is most probably well known to many from the movie “Dirty Dancing”. It’s a great place for relaxation and serenity with its great waterslide and wide sandy beach.  The lake is surrounded by expansive views and offers its visitors many kinds of multi-sport adventurers. 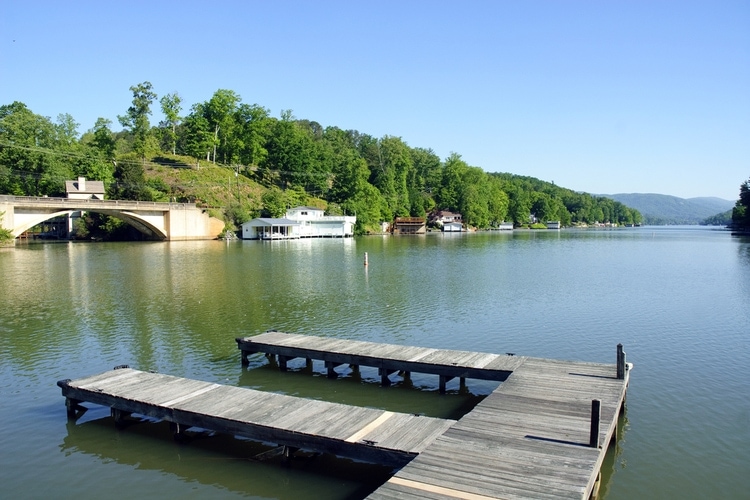 Wrightsville Beach has been a famous vacation destination in North Carolina throughout the generations. It is known for its crystal blue waters, world-class watersports, and very active island lifestyle.

The beach stretches for five miles and has stunning views surrounding the island. It has a history of nearly 100 years, which can be explored through exhibits and guided walking tours. 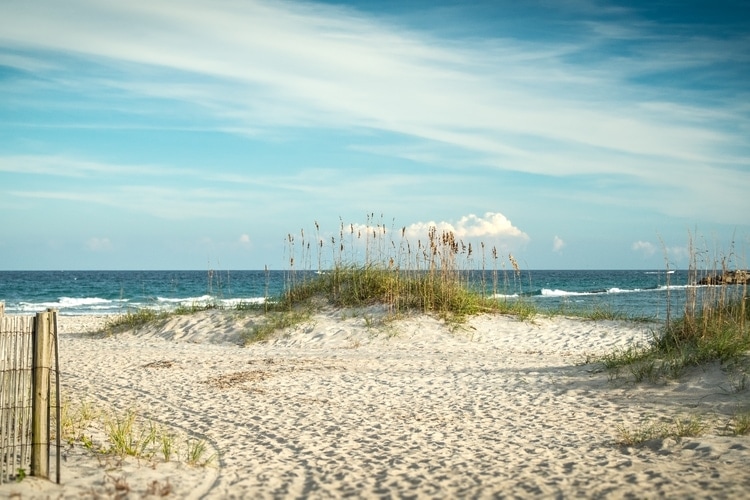 Want more tips on interesting places to visit in North Carolina? Leave a comment below! 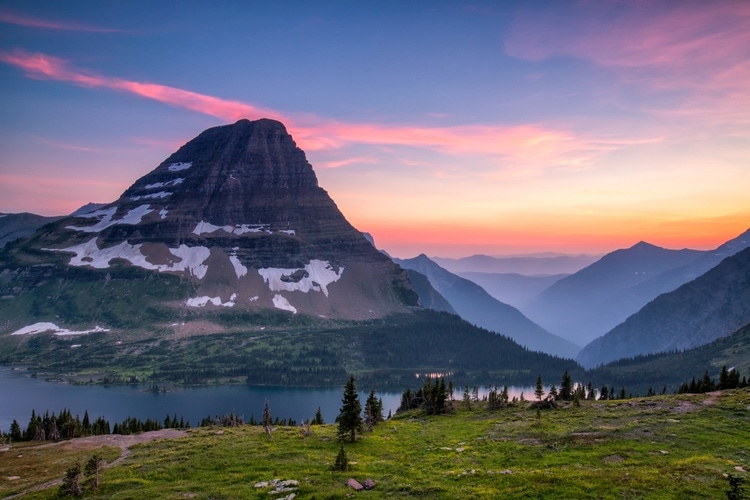 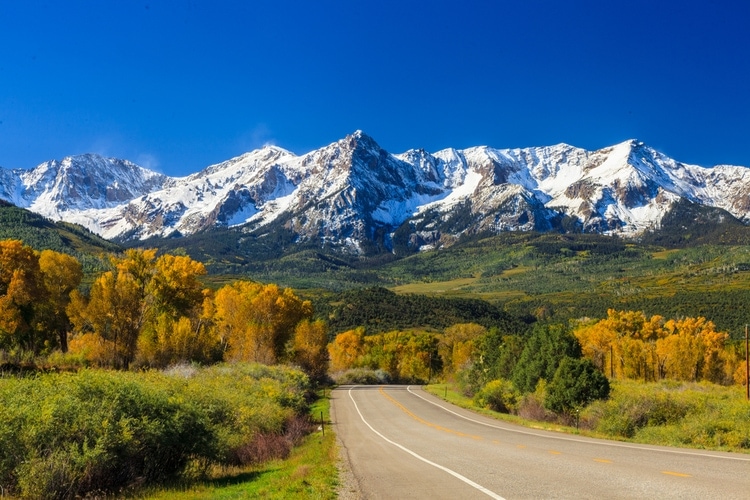