15 Best Places to Visit in Arizona 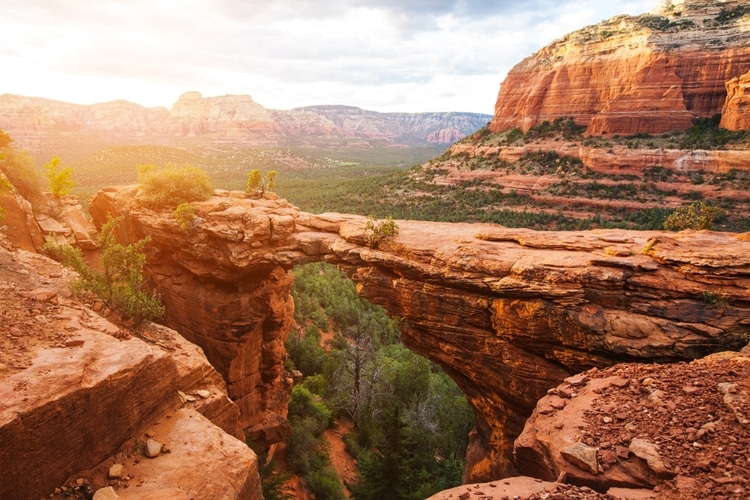 Want to find the best places to visit in Arizona? Here’s an updated guide for 2020 with interesting and beautiful destinations to include on your Itinerary.

The famous Grand Canyon State, Arizona, represents everything that is expected from the wild Southwest – mountains and canyons under the splendid sunshine, Indian tribes, ghost towns, and cactus deserts.

Although Arizona is associated to be a land of isolated ranches, mining camps, and citrus farms, almost all of its population is urbanized now and only a small number of people live in the countryside farms. Buildings and architecture of the old cities are full of Victorian-style houses, which represent the traditions and culture of their first citizens.

Arizona is home to many natural and manmade wonders which offer a world of impressions for adventurous travelers.

One of the world’s most astonishing landscapes, Grand Canyon, is not only Arizona’s most distinguishable landmark but also the most famous canyon in the world.

At enormous proportions of 446km wide and 29km long along the Colorado River, Grand Canyon National Park is a unique combination of geological colors and shapes formed millions of years ago.

Located in Arizona’s northwest, it’s overwhelmed with canyons, river tributaries, and beautiful erosional formations. There are two public sites of Grand Canyon National Park – the North and South Rims, which offer stunning views with the desert sky stretching above it.

With many overlooks, hundreds of miles of trails, it invites visitors to admire its unworldly views. A helicopter ride over the canyons is another way of enjoying impressive aerial views of the park. 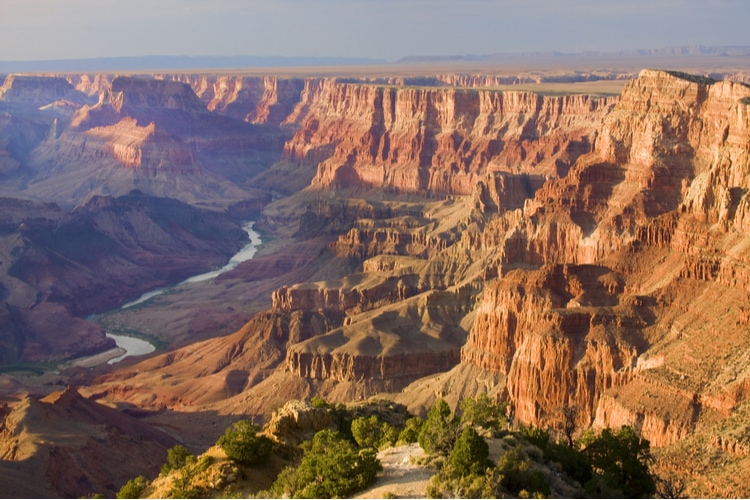 As a result of the massive explosion 175 million tons of rock excavated from the area. The asteroid weighed 300,000 tons and traveled at a speed of 12 kilometers per second.

When it hit the earth, it exploded with the force that equals about 150 times the force of the atomic bomb that demolished Hiroshima. These types of events occur about once in 6000 years and are huge enough to destroy a modern city.

Today, Barringer Crater is the world’s best-preserved meteorite impact site in the world. 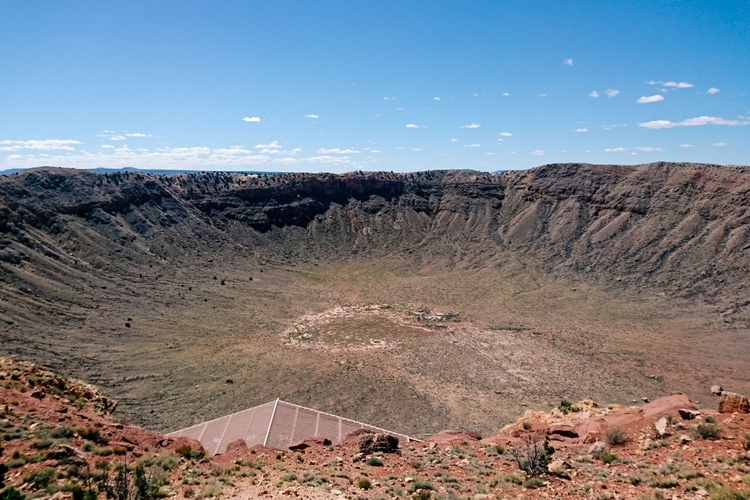 Antelope Canyon is one of Arizona’s top destinations and is amongst most photographed places in the world. It consists of Upper and Lower Antelope Canyons, both of which offer very different experiences.

Antelope Canyon draws thousands of photographers and tourists for its mysterious, majestic beauty. The canyon was formed as a result of water erosion of millions of years and has a wave-like labyrinthine structure illuminated by the angled beams of sunlight.

These beams shine down across the stone walls and create a supernatural appearance of light and shadow through the red and orange colored formations. The famous slot canyons of Antelope have been featured in Hollywood films and publications all around the world. 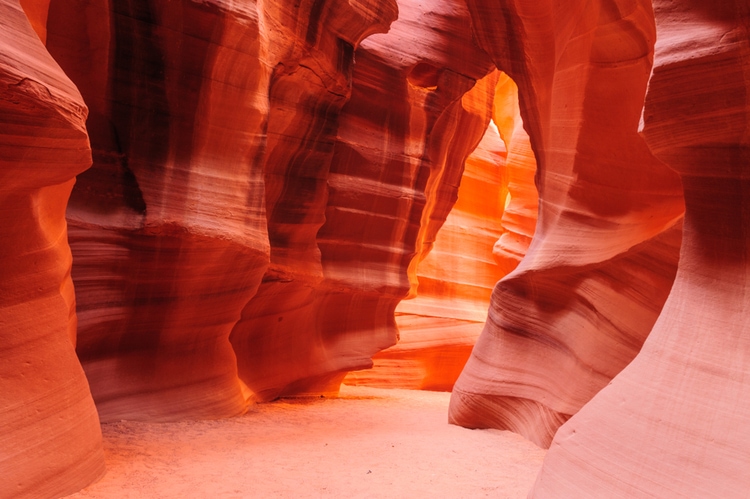 When you think about the American west, you most likely envision its universal symbol – saguaro cactus. Saguaro National Park is a 92,000-acre park located in southern Arizona near Tucson and is home to America’s largest cacti Saguaro, which grows only in the Sonoran Desert.

Here you have the chance to explore enormous cacti that live up to 200 years and are enlightened with the beauty of the desert sun. The park is divided into two separate sections – eastern and western.

To get between these two sections is a one hours drive through the Tuscon city. Usually, half a day is enough to explore the highlights of the park, but with more time you can go on a day hike through the trails. 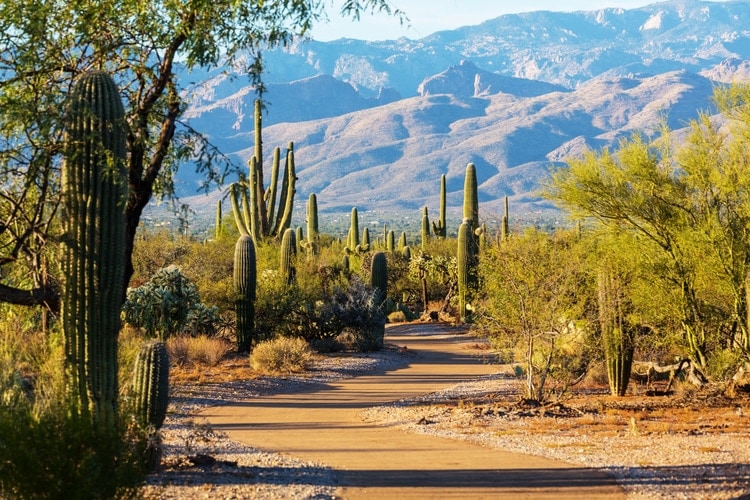 Havasu Falls might just be one of the most scenic places on earth. It’s a spectacular waterfall in the Havasupai Indian Reservation starring 5 different and unique falls of bluish-green waters.

The cascading waters of Havasu descend about 100 feet before vibrantly splashing into a turquoise pool. Havasupai region is not included in the Grand Canyon National Park and is within the authority of the Havasupai Tribe. 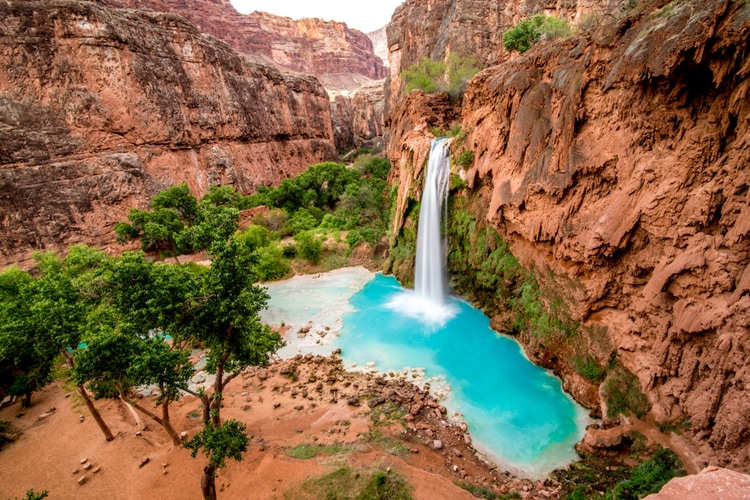 Near Arizona’s northern border with Utah, you can find one of America’s most famous geological marvels – The Wave. It is a marvelous sandstone rock formation that is 190 million years old.

The beautiful and one of a kind fluctuating layers and stripes of The Wave are created by rain erosion and mild wind. The area of The Wave has limited access in order to protect the landscape, as some of its edges break easily when stepped on them. 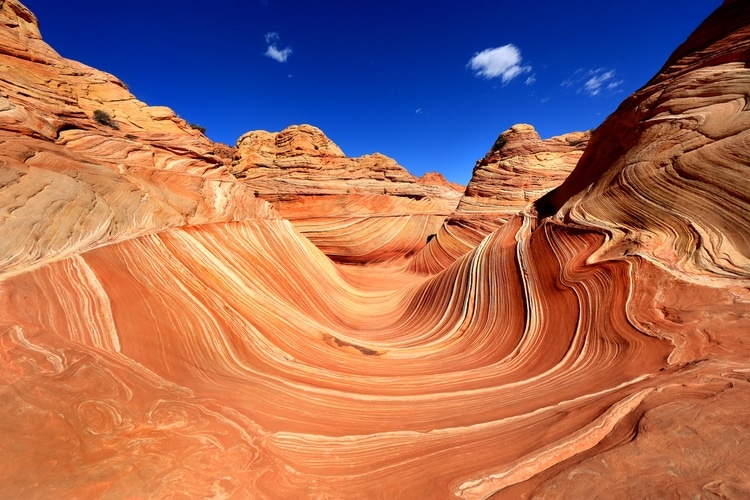 Canyon de Chelly is the homeland of the Navajo people, who lived here for nearly 5000 years. It represents a mix of past traditions and present culture and gives insights into today’s life of the Navajo, who still inhabit here. They make their homes here, raise livestock, and farmlands in the canyons.

Canyons of the monument with oblique sandstone walls up to 1000 feet high, many beautiful overlooks and preservations of Anasazi ruins make Canyon de Chelly one of must-see spots in Arizona. 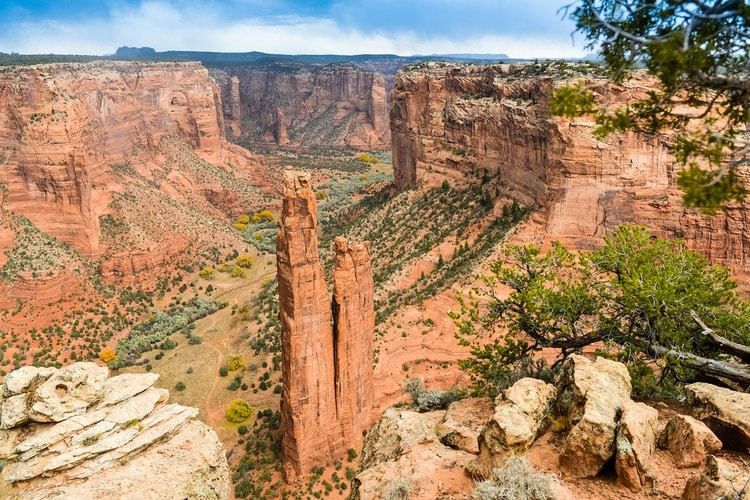 Known as “The Town Too Tough to Die”, Tombstone was Arizona’s most famous mining camp, named by miner Ed Schieffelin, who was searching for silver in Arizona in the late 19th century.

The area of Tombstone at that time was very dangerous, as was inhabited with Apache Indians who were ready to fight for it anytime.

To experience the unique and typical spirit of the Wild West, thousands of tourists visit Tombstone every year. Here you can find characters of the Old West canonized in stories, and also brought back to life by actors wandering in the dusty streets of Tombstone. 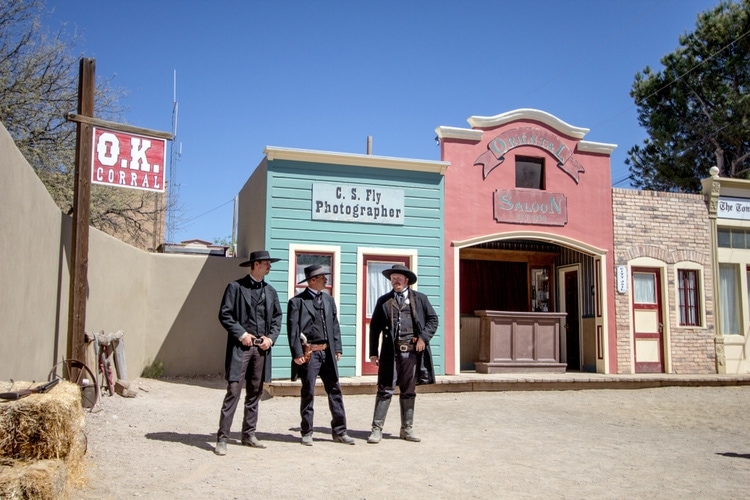 One of the grandest landmarks and icons of West America is Monument Valley. The surreal panorama of isolated sandstone formations of Monument Valley has been captured in countless movies and photos.

Monoliths rising spontaneously from the wide flat desert floor combined with the surrounding mesas and desert environment create a mesmerizing scenery of the area. 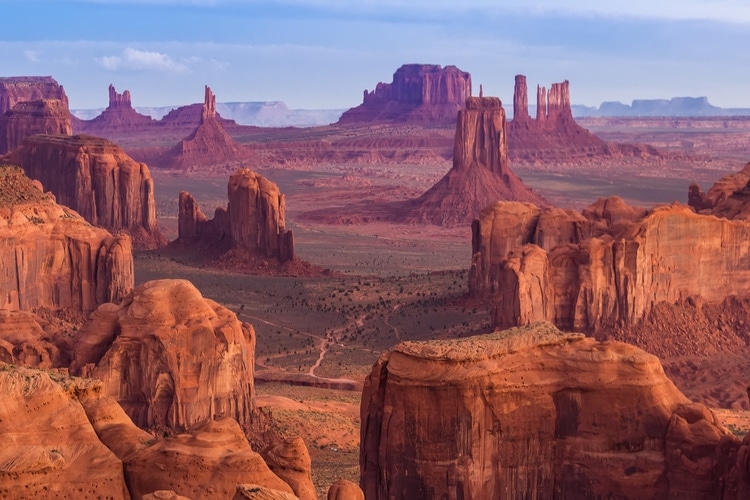 Full with iconic red rock formations, Sedona city is like an oasis in the middle of the Arizona desert. The main attractions of the city are the sandstone rocks that glow brilliantly orange with sunrise and sunset.

Besides impressive landscapes, Sedona is also full of art galleries, museums, wineries, and many other attractions. 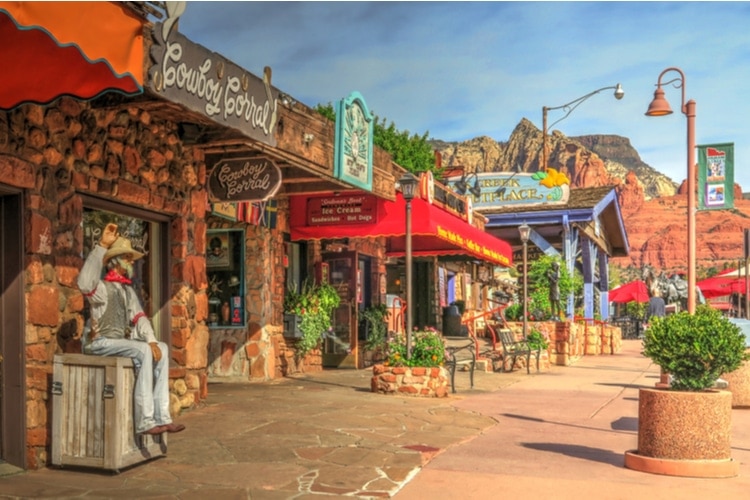 Located in the Verde Valley, Montezuma Castle is one of the most famous and best-preserved Sinagua ruins. About 70 feet high of the valley floor this 20 room housing is nestled into a cliff and is known to belong to the Sinagua Indian people who farmed the surrounding area between the 12-14th centuries.

To ensure accuracy, preservationists aimed to complete the renovations and restoration of the castle in the Sinagua tradition using local materials and even performing repairs by hand. 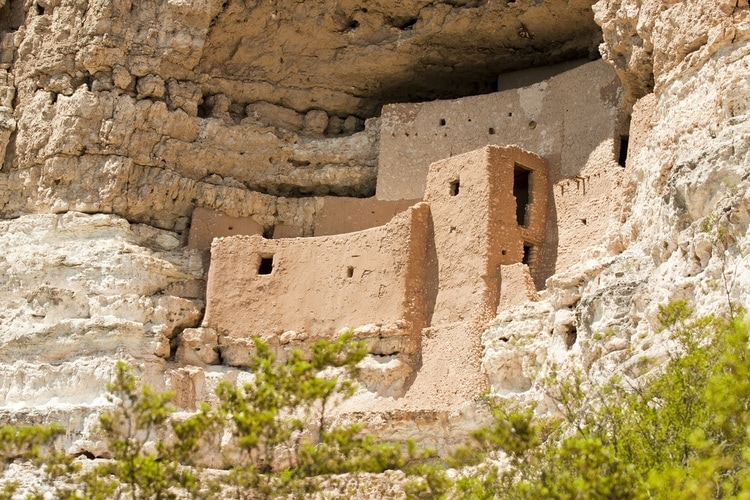 It covers 1.5 million-acre of a recreation area, where both water and land lovers can find activities to do. The area also contains a variety of plants and animals, some of which cannot be found anywhere else in the world. 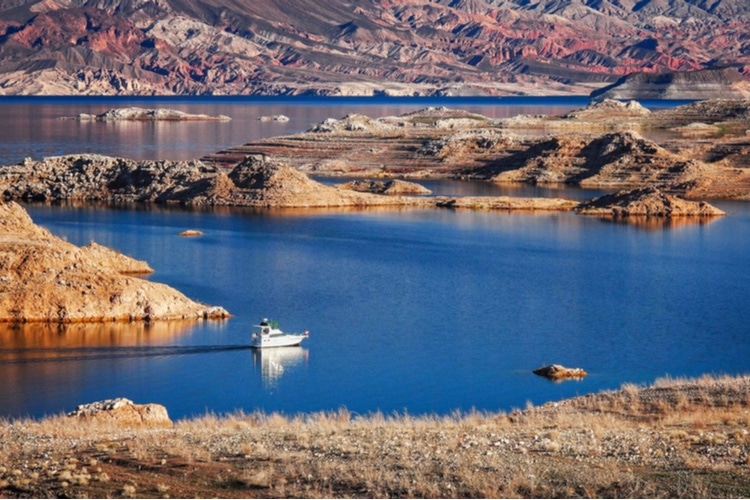 Tumacacori National Historical Park is located in the Santa Cruz River valley and preserves the ruins of three Spanish mission communities. Here is where O’odham, Yaqui, and Apache people mixed with Europeans.

Its settlement dates back to the early 17th century when this was an Indian village in northern Mexico. During the last few years, the Park started to organize many evening events that draw visitors’ attention to the panorama of the clear night sky over Tumacacori. 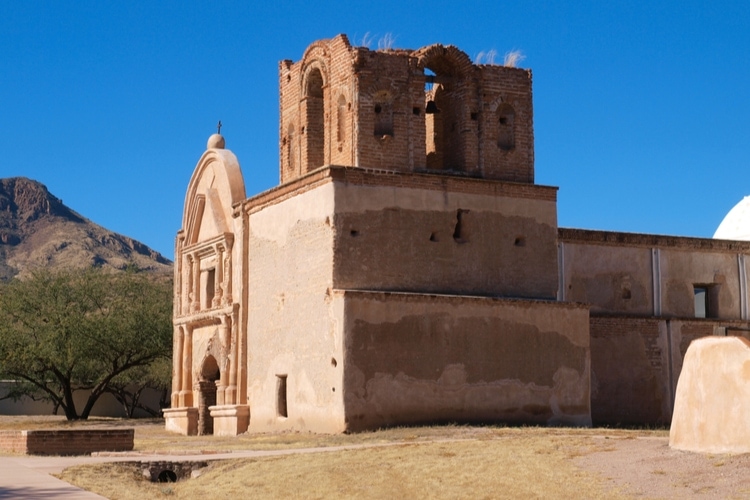 Goldfield Ghost Town is a historic small mining town nestled near the Superstition Mountains. This is where people camped in the late 19th century while working in gold mines.

The town was populated only for five years. Today, this 45-acre big land is a tourist attraction. The mine and the exteriors of the town are replicas of the originals. Inside the old buildings, there are now museums, restaurants, shops and there is even a church. 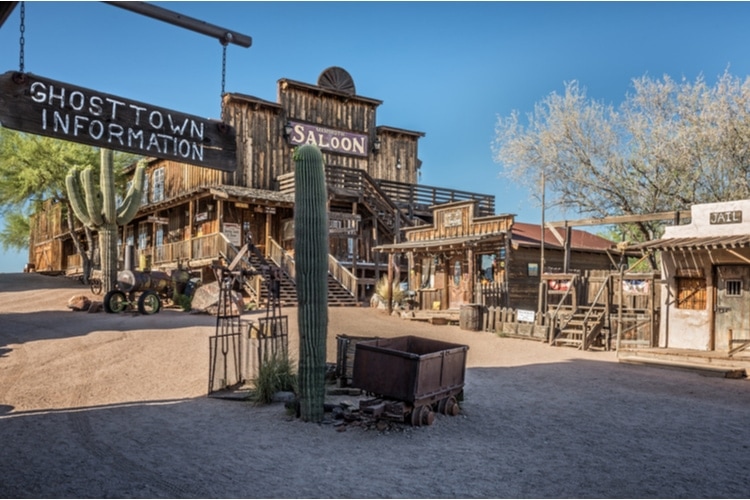 Bisbee is one of the oldest mining cities in Arizona proved to be one of the richest mineral centers in the world, that produced about three million ounces of gold and eight billion pounds of copper, not to mention other precious metals.

Located in the mile-high Mule Mountains of Arizona’s south, Bisbee has the aura full of cowboy tales found nowhere else in America. 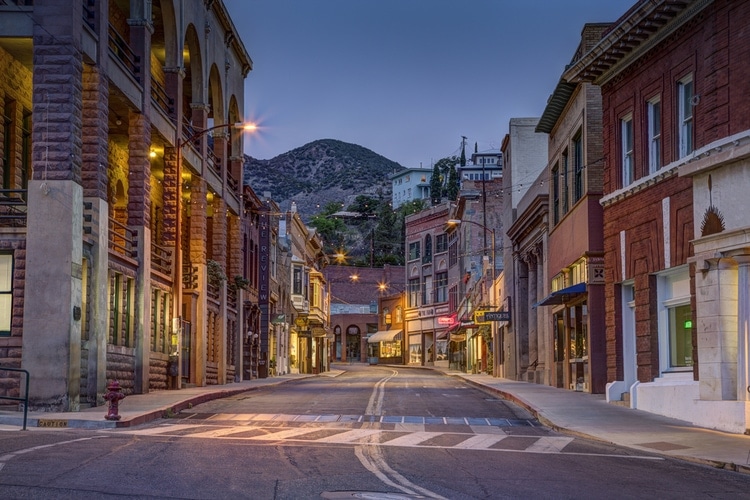 Want more tips on places to visit in Arizona? Leave a comment below! 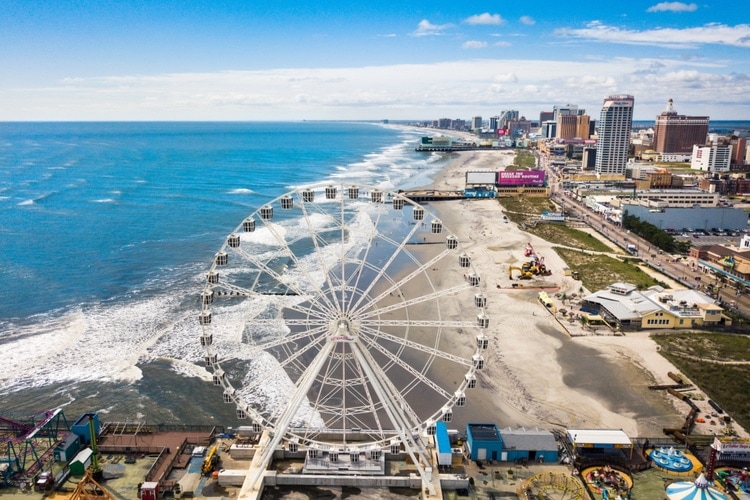 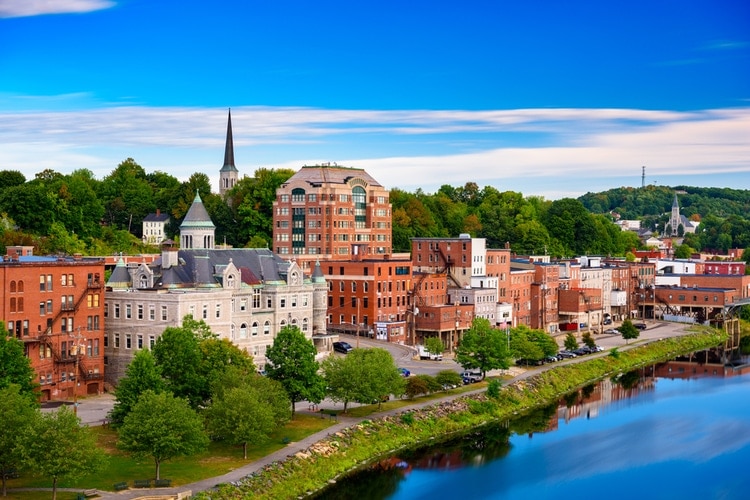