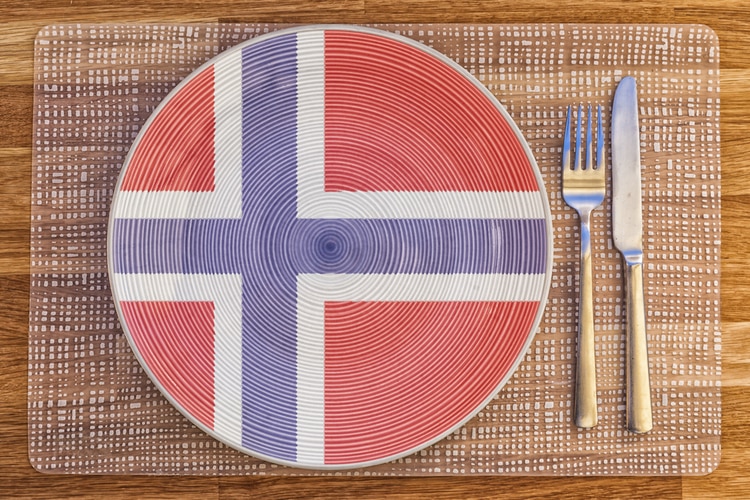 Want to try some traditional food from Norway? Here are 15 Norwegian dishes that you should try as well as more info about the local cuisine.

Norwegian Food has many similarities with Swedish food and Danish food as well as Icelandic food, but Norwegian Cuisine also consists of some unique dishes and ways to prepare the food.

Traditional food in Norway can be eaten at restaurants throughout the country, and some places even prepare the dishes like the old recipes whereas some modern restaurants will prepare traditional Norwegian dishes with a modern touch.

Fårikål is a hearty stew which is quite easy to prepare, and a popular dish in the cold winter months. There is even a dedicated day of the year when you eat Fårikål.

It’s commonly eaten in the western parts of Norway, but you can also find some good places to eat Fårikål in Oslo, such as Dovrehallen. 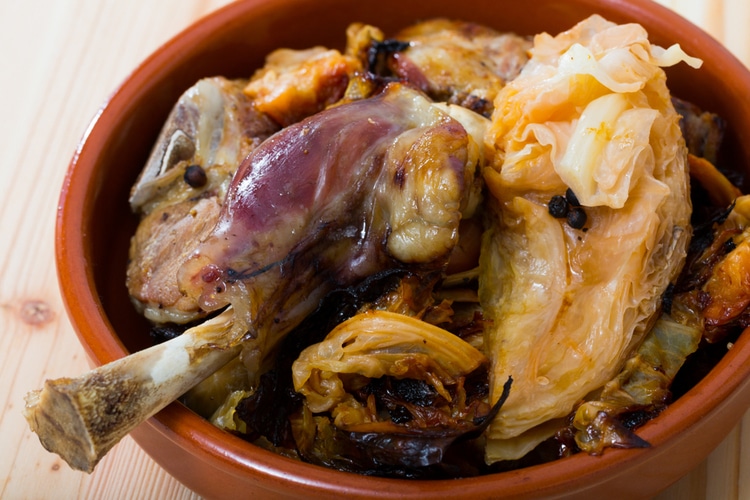 Pickled Herring or Sursild as its called in Norwegian is quite common and can be found in almost every supermarket. Pickled Herring is an integral part of Scandinavian cuisine as well as the Baltic countries and the Netherlands.

You could also eat herring prepared in other ways, such as fried herring. 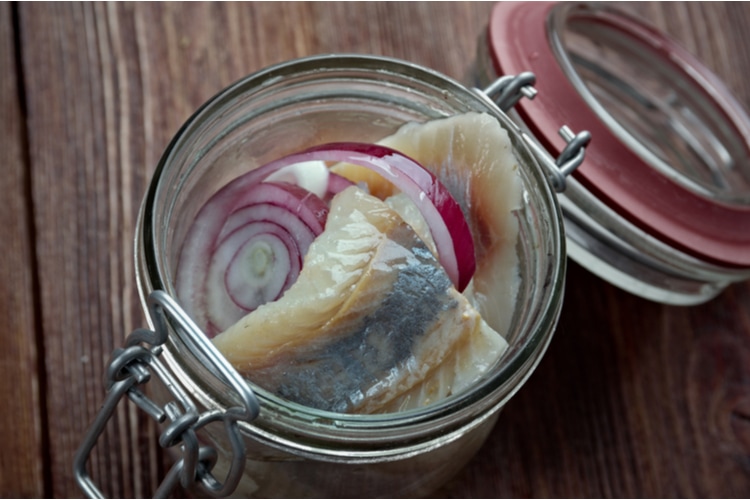 If you’re traveling to the northern parts of Norway, you might get the chance to eat Finnbiff, which is another traditional food from Norway, made with sauteed reindeer meat, served with sauce in stew form.

It’s also popular in the Lapland region of Sweden and Finland as well as Russia. 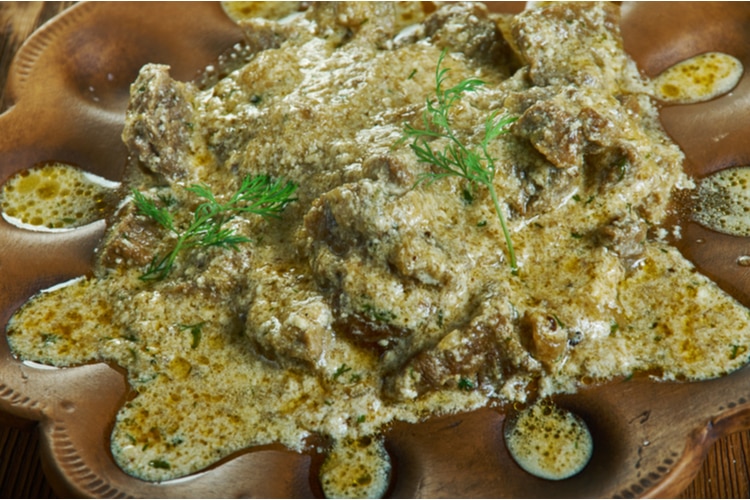 It’s best eaten homemade, but you can also find some gourmet versions in restaurants, and if you’re lucky maybe you’ll get invited for dinner hosted by a Norwegian person.

Of all traditional food from Norway, the Smalahove might be the most off-putting and weird Norwegian food to try.

This is not something that the ordinary Norwegian will eat on a weekday, but Smalahove is nonetheless a traditional dish which basically consists of sheep’s head.

The sheep’s head is either boiled or steamed for about 3 hours and is usually served with rutabaga and potatoes. It was typically a food for the poor people back in history, and sometimes the brain was cooked inside the skull as well before eaten with a spoon. 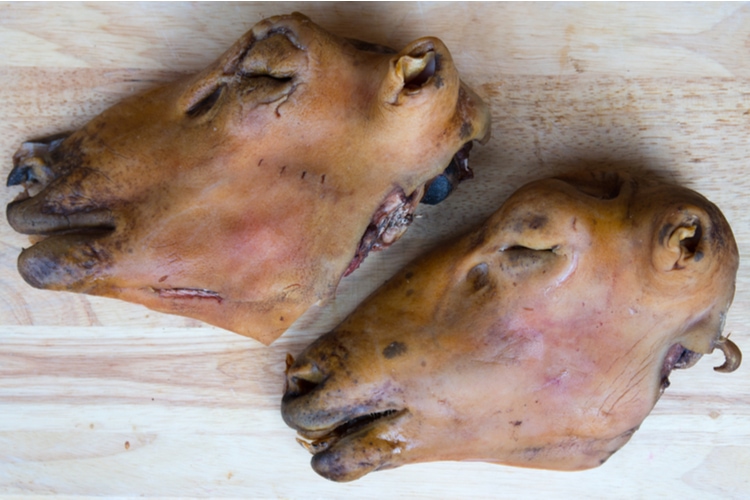 The most popular type of brown cheese in Norway is the Gudbrandsdalsost. It’s also known as Mysost and it’s typically eaten on sandwiches or crispbread. It’s made with whey and milk or cream.

The brown color comes from the heated milk sugars during production. 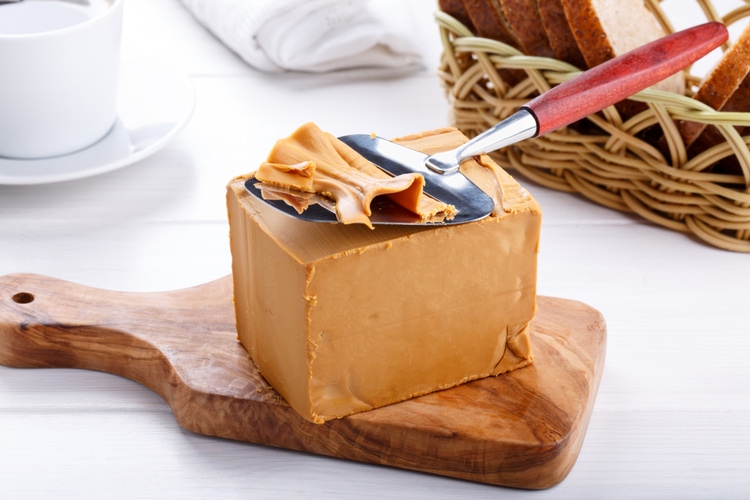 You can eat Salmon in many ways in Norway, either cooked, fried, cured, or smoked. One of the most popular ways of preparing salmon is the one called Gravlaks, which is basically salmon that has been cured in salt, sugar, and dill.

Salmon fillets are usually served with potatoes, vegetables, and some sauce. 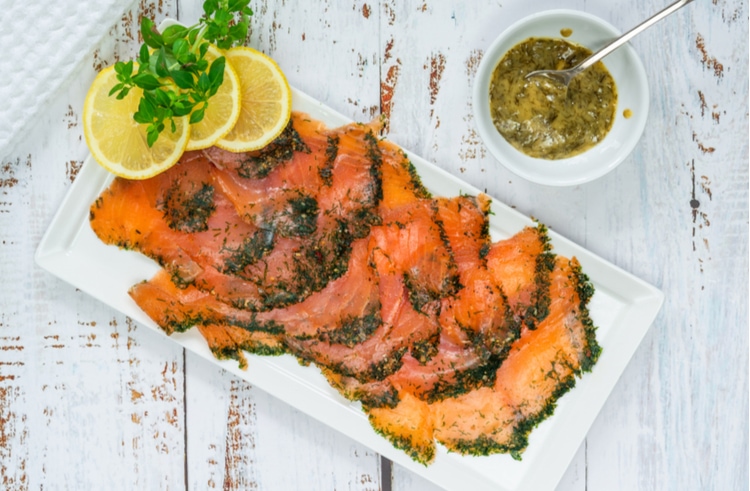 Lutefisk is another traditional food from Norway, which is typically eaten around Christmas. Lutefisk is made from lye and whitefish (normally cod) which has been dried and salted. 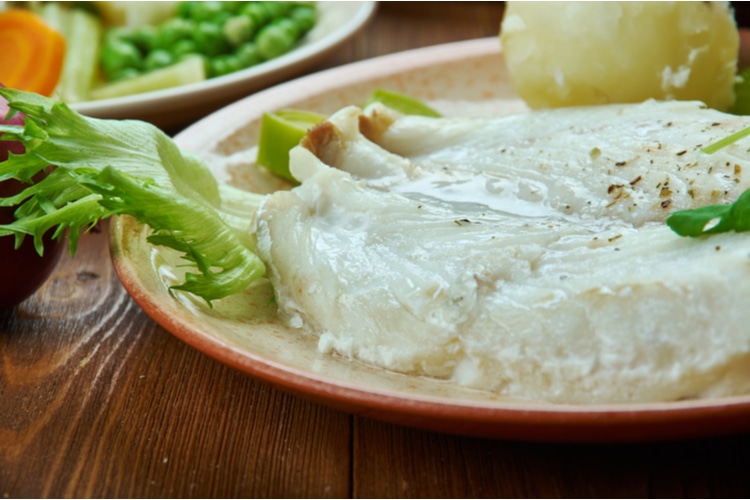 If you want to try some traditional soups in Norway you should try Sodd, which is a traditional mutton soup with potatoes and carrots. If you’re visiting during the colder parts of the year, this hearty meal will definitely give you some welcomed warmth. 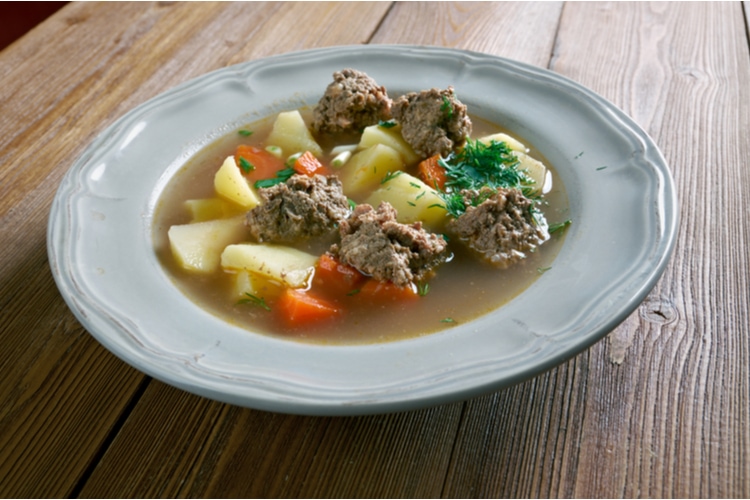 For foreigners, this might be the most controversial food from Norway. Whaling isn’t banned in Norway, and although a decline of the consumption of whale meats, many Norwegians eat whale from time to time.

It’s not considered a controversial type of food in Norway. And you can find it in restaurants throughout the country as well as in fish markets. 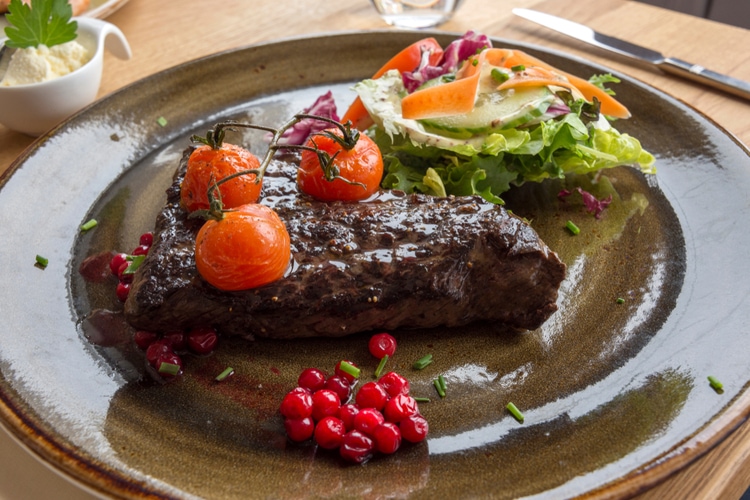 Tørrfisk is a Norwegian delicacy, particularly around the islands of Vesterålen and Lofoten. It’s a type of unsalted and cold air-dried fish, normally cod.

The tradition of Tørrfisk dates back to the 12th century and can also be cured through fermentation. 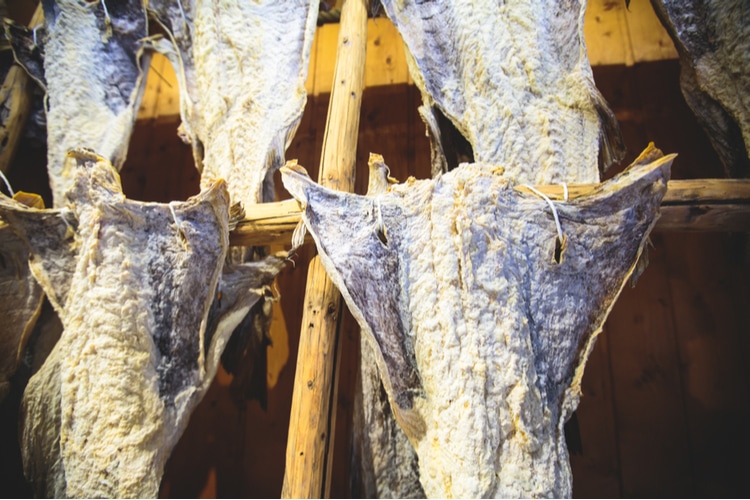 Lapskaus is another Norwegian stew that I can recommend you to try. It can be made by fresh or leftover meats such as beef or lamb, but pork can also be used.

Potatoes are also included in the stew along with vegetables such as onions, carrots, rutabaga, celery root as well as various spices and herbs. There is a similar dish which is known as European sailor’s stew, and the origins might come from the Vikings. 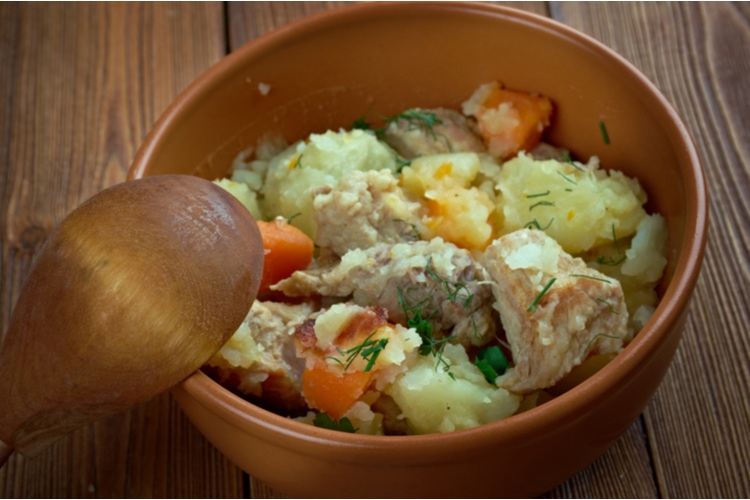 While regular hotdogs are sold and consumed in Norway, the Norwegian version with a sausage in potato pancake is more traditional and unique.

You will find Pølse med Lompe in kiosks, gas stations, IKEA, and around train stations, and it’s a kind of Norwegian Street food. 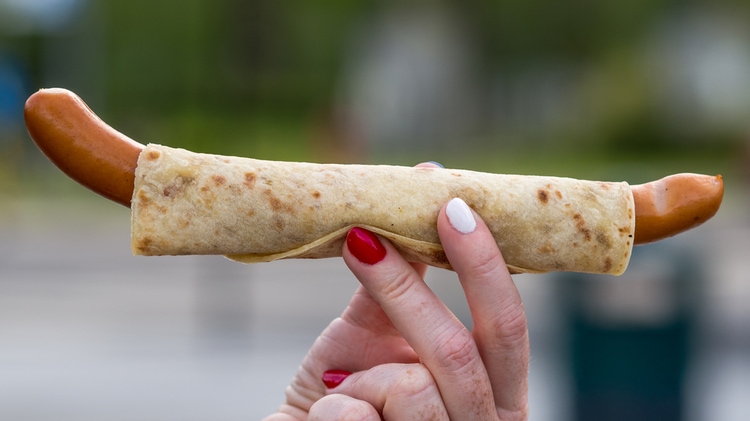 Fish balls in white sauce is another classic retro dish from Norway. It’s easy to make and it’s usually served with potatoes and carrots.

Belgian waffles might be famous worldwide, but Norwegian heart-formed waffles are just as delicious, usually served with jam and cream as well as a dash of raw sugar. 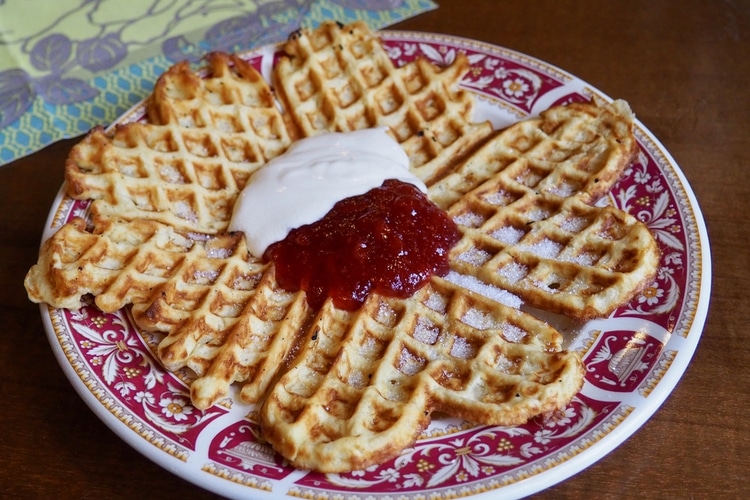 More about Norwegian Food and Cuisine

Norway has a long history of fishing, and many villages supported themselves with seafood for many years. That holds true still today, although international food and other types of meat are commonly eaten as well.

Seafood remains an important part of Norwegian Cuisine, even more so than its Scandinavian counterparts. For example, Norwegian salmon and shrimps are world-renowned and exported worldwide. But of course, the highest quality is kept in Norway.

Sheep, lamb, and pork are other popular meats found in the cuisine of Norway. Many traditional dishes are accompanied by potatoes, carrots or some other root-crops and vegetables.

The sauce is also an important ingredient and the most common sauce is perhaps brown sauce, but there is a wide variety of Norwegian sauces that fits perfectly with the different kinds of meat and seafood. 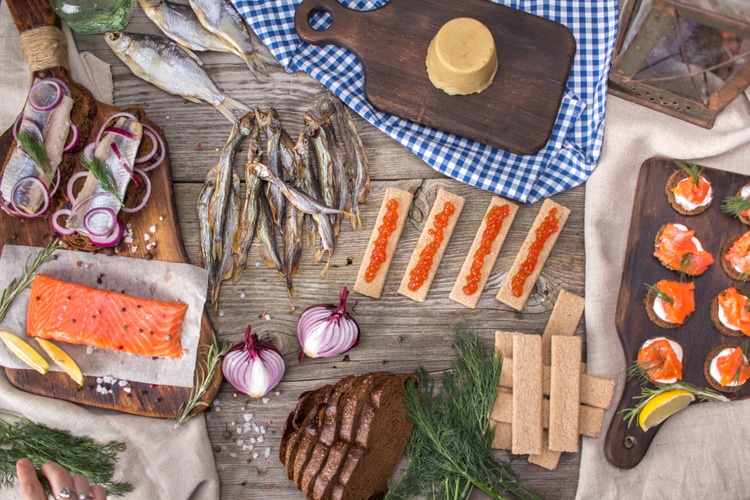 Other traditional foods from Norway

What is a typical Norwegian breakfast?

A typical Norwegian breakfast usually consists of sandwiches with various cold cuts, spreads, cheese or jam. Most Norwegians drink coffee in the morning, and some will also have a glass of milk or juice.

Yogurt, eggs, oatmeal, cereals, and crispbread are other popular choices when it comes to breakfast in Norway. 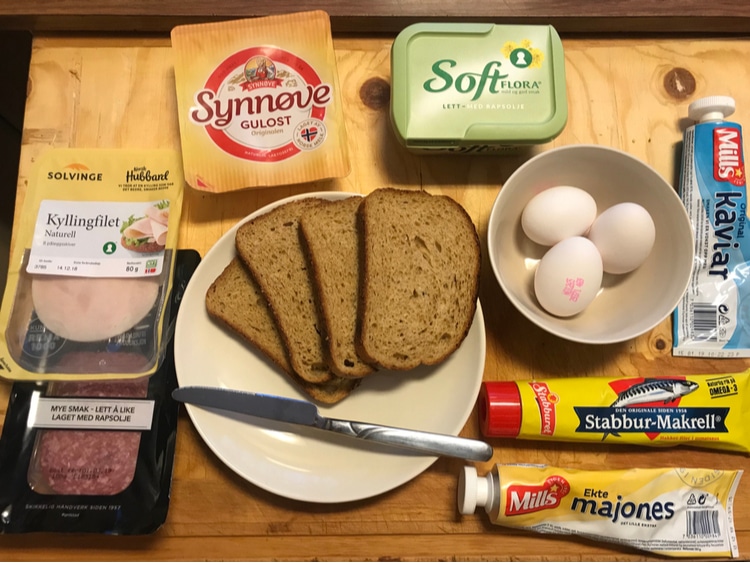 Pinnekjøtt is the main dish served at Christmas Eve and consists of air-dried ribs from sheep. Other common dishes include Ribbe (pork ribs), lutefisk, boiled cod, ham roast or turkey, which is served with various side dishes.

Most Norwegian typically spend Christmas eve with their family and enjoy a big feast with lots of Norwegian food accompanied with various kinds of pastries and sweets afterward. 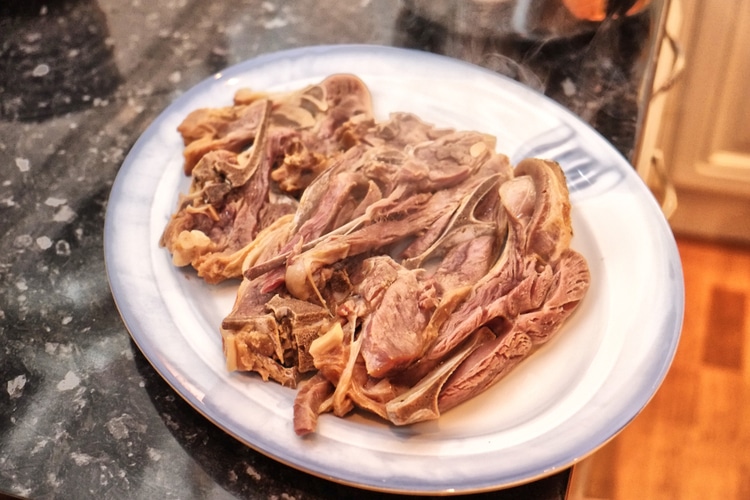 The most common way to eat Lefse is to just add butter and rolling it up, but you can also add sweeter ingredients such as jams, lingonberries, sugar or cinnamon. 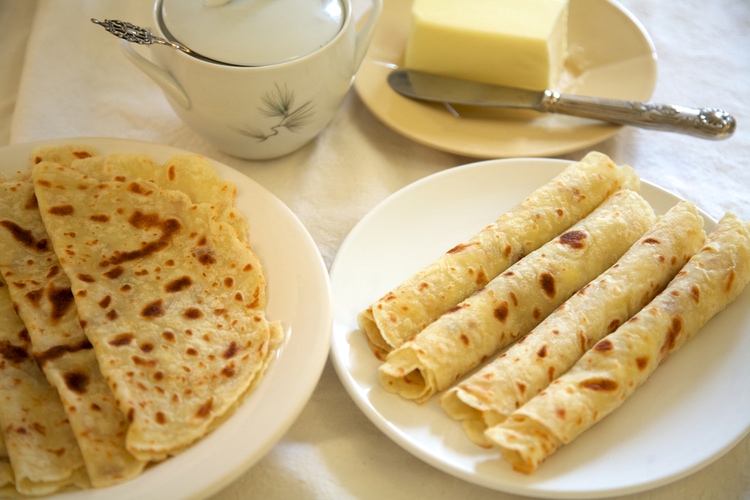 Which is your favorite traditional food from Norway? Leave a comment below! 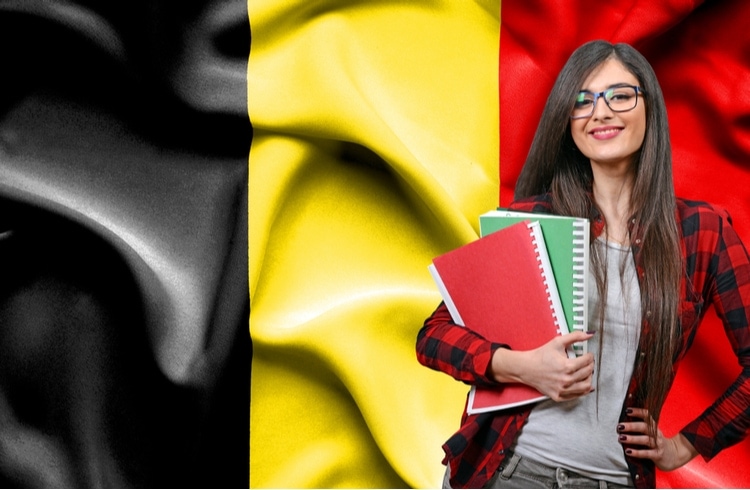 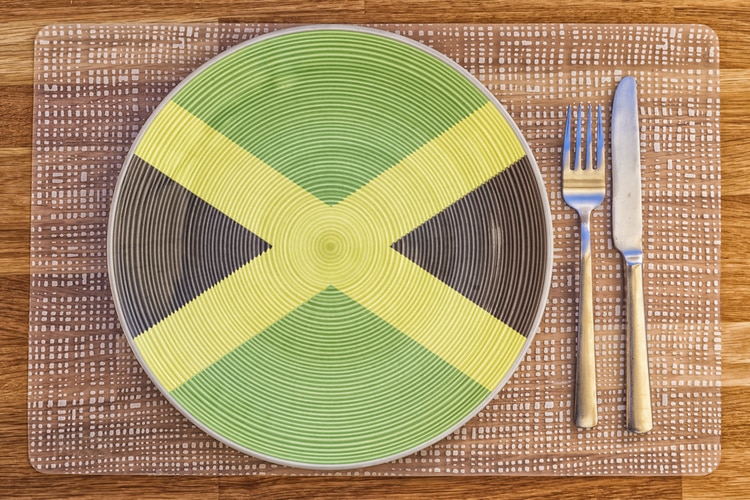