For many, the holiday photos are an important part of the trip, both as memories and to show friends and family when you get home. But it is not always easy to take those “perfect” vacation pictures that many are looking for.

But, after reading my best tips for taking better vacation photos, you will also have the tools to take those perfect pictures everyone is “dying” to get.

Get up early or come back before sunset

The best photos are often taken just before sunrise or just before sunset. This time of day is also known as “the golden hour”, and the light during this time produce great image results. Early in the morning, you avoid problems with a lot of people in the picture, and you will usually be able to enjoy the site in peace and quiet.

Toward the afternoon/evening when the sun is going down is the second golden hour. The downside to photograph later in the day compared to the morning is that there may be people who come into the picture.

Something that distinguishes many professional photos from standard pictures is precisely the composition. What do I mean with “the composition” of the picture? The composition is mainly how you place the subjects in the image. One can, among other things try to frame your subject, use leading lines or create symmetry in the picture.

Another tip and a standard rule when talking about the composition is the so-called “rule of thirds” which means that you split the image into nine equal boxes, and place the subject where lines meet.

Rule of Thirds is an ancient technique that dates back to the antique era in Greece, where they used it for creating interesting paintings. 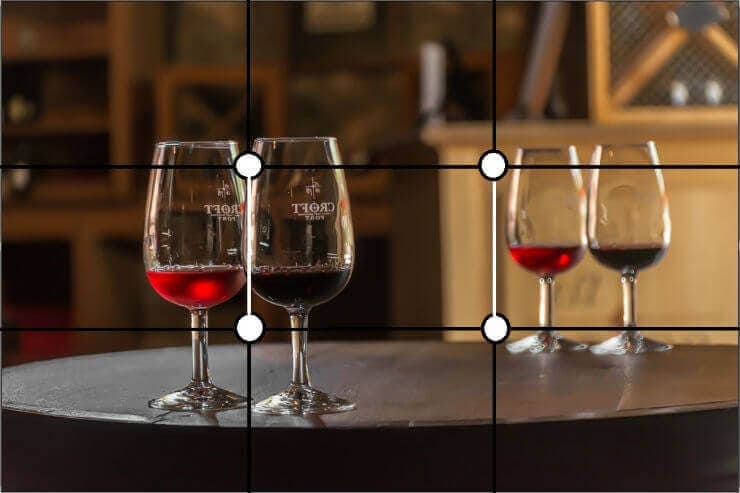 The light is sharpest when the sun is at its zenith and at this time of day, one should avoid taking pictures if possible. The bright light creates strong contrasts in the image and provide less flattering shadows of buildings, places, and people.

With that said, you can always use light to your advantage, depending on what you want to achieve, but generally it’s easier to get great pictures just as the sun rises, or when it is about to go down.

Photographing someone standing and posing can be fun and beautiful, but it can also become stiff and boring. Instead, try to capture a moment where someone moves.

Spontaneous pictures of people will always be lovely and memorable.

Sometimes you think you got that perfect picture, and then you go back to your hotel, and open it up on your computer just to find something in the image that you do not like.

Therefore, one should always take several pictures. By doing this, you increase the chances to get that perfect shot.

Use a Selfie Stick

If you want to take selfies on your holiday, is almost a must to get a Selfie stick. Selfies without selfie sticks are most of the times just a face in front of a landmark. It’s hard to get both the background and yourself included in the photo.

With a Selfie stick, you’ll have the phone further away, and you will be able to capture that awesome background or cozy place you want to shoot yourself in front of.

Sometimes you can get cool photos by using a different angle or perspective. Photographs of animals, for example, can become much stronger by lowering the camera to shoot from the animal’s perspective and their point of view.

The picture below is photographed at the same level as the dog. The picture had not been as vibrant if you had taken it from above. 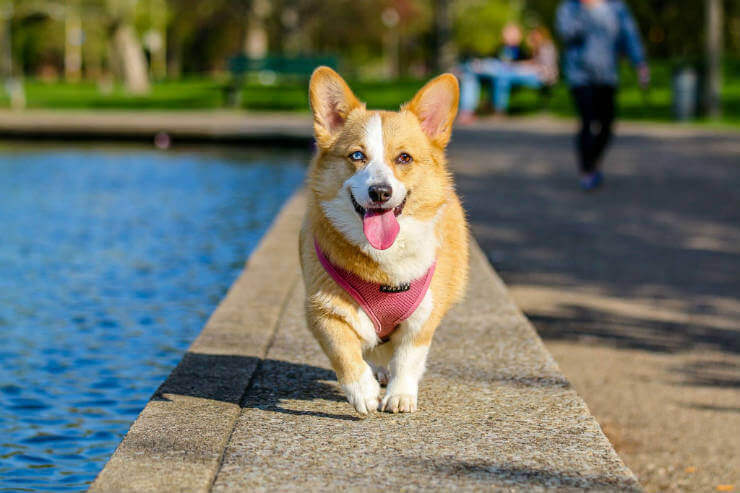 From the dog’s point of view

Do research before you arrive

Knowing where a particular image is taken can be good to know before you arrive because it saves time. To do research before you reach the destination also included to check when the sun is in a good location, or when the sun goes down/up.

If you have a smartphone, you can easily download an app that tells you when the sun goes down and up at a particular location.

Tripod is the best support you can get, and needed if you want to take exquisite night shots. Otherwise, I think tripods are clumsy to carry around. I have a great tripod for myself, but even if I should, I rarely use it, other than when I’m taking pictures at night.

Therefore, I recommend two other options:

A small and flexible tripod that can be attached to things, thanks to its flexible “legs”. It weighs almost nothing, but still make it possible to be able to shoot with the self-timer and have slower shutter speed.

Use any stable surface

If you lean the camera on a stable surface, you can get better support and keep the camera still. Using this technique will allow you to use longer shutter speeds without camera shake.

On the day when it’s light out, you rarely need a tripod or a stable surface when shooting. However, it is still important to hold the camera properly to avoid camera shake, which otherwise results in inferior quality and sharpness. It is not unusual to see people holding their cameras and mobile phones with their arms out.

One should always keep their arms inwards to the body. This will give you the best stability, thus avoiding camera shake. Even the slightest movement while taking the picture may influence the image and make it blurred or less sharp.

Look at other people’s vacation pictures

Let yourself become inspired by other photographers. This is, of course, a part of the research, and when you see other images photographed on the site, you’ll get an idea of what you can expect.

Do not use the digital zoom

It is common that images are blurred when using digital zoom. Instead, use the optical zoom if your camera allows it since it produces a sharper image.

Or better yet, move closer to your subject.

Ensure that the image will be straight

An oblique image is most of the times inferior to a straight image. Unfortunately, it is quite easy to hold the camera or mobile phone awry. In many DSLR and digital cameras, you can check the live view mode and see if it is straight or not.

If you still happen to get an awry holiday picture, it may still be possible to save the image through editing.

Last but not least we have the foreground and background. To make a picture more whole, you can include a foreground that either enhances the photo and makes it more interesting and alive or a foreground that leads your gaze further into the picture.

If you’re photographing the sea, for example, you may get better and more interesting photos if you have a bridge or stones in the foreground.

Of course, it’s not always necessary or better to have an interesting foreground or background, but most of the times it will be, at least when you’re shooting vacation pictures.

However, if taking portraits, one should make the background blurry by zooming in and using a low aperture value, such as F/2.8.

In the picture below you can see how I photographed flowers in the foreground to enhance the image of the French city of Colmar. 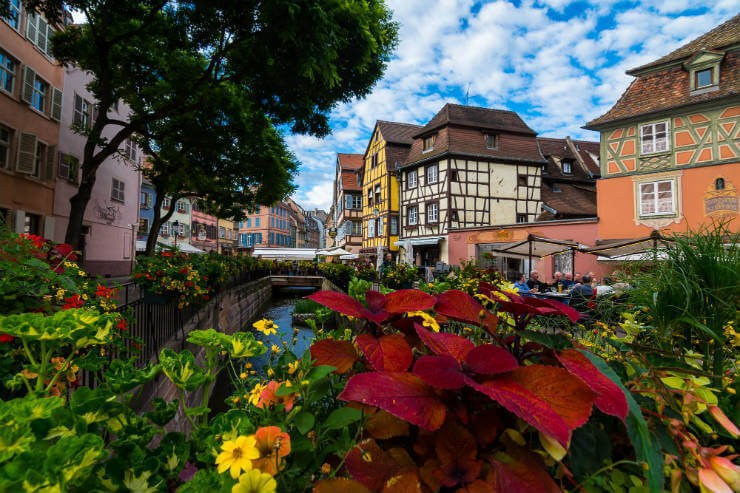 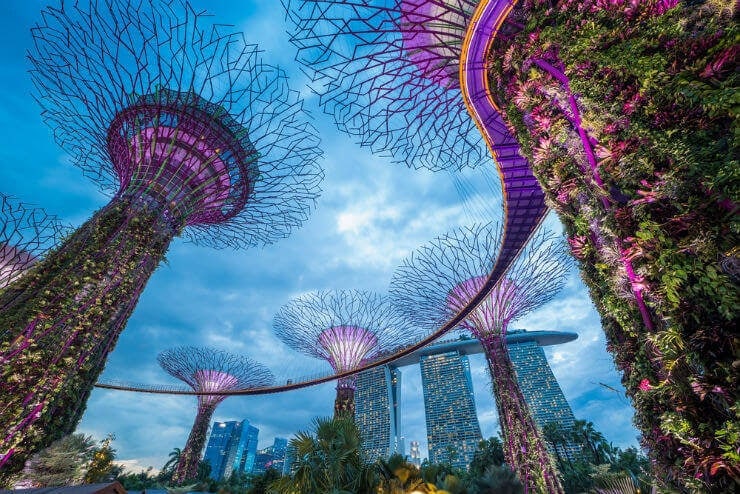 Top Things To Do In Singapore
← Read Last Post 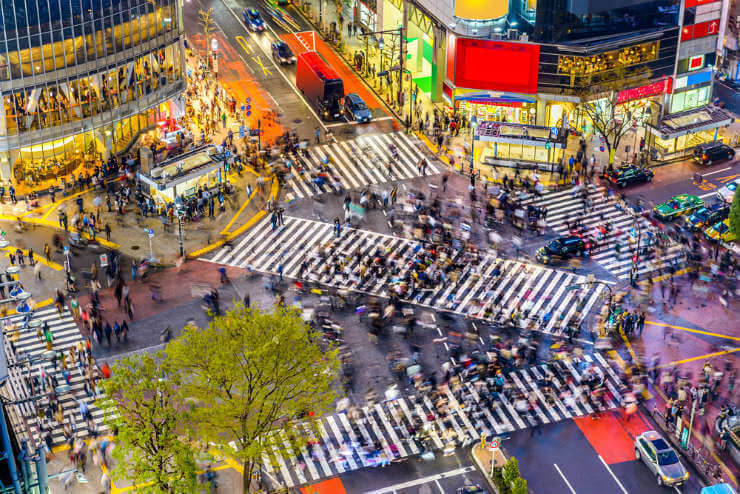