15 Fruits in Mexico that you should try 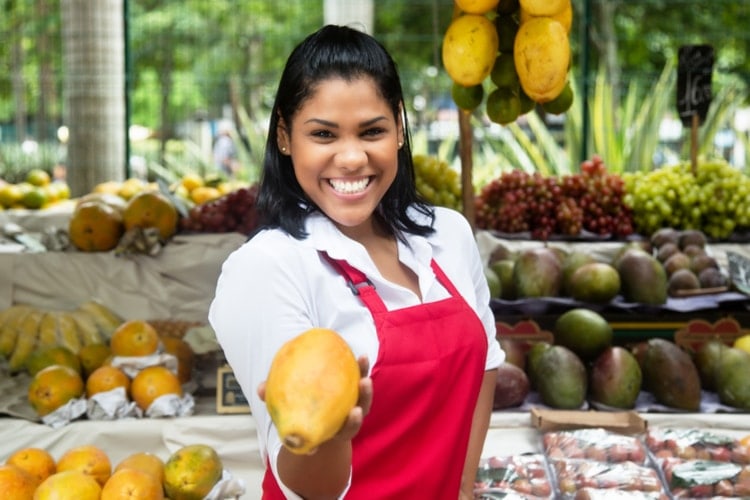 Want to know more about Mexican fruits? Here are 15 local Fruits in Mexico that are cultivated here that you should try while visiting!

Mamey sapote is native to Central America, and it’s usually available in Mexican markets from late winter to early spring. The mamey pit has been used for beverages since the time of the Aztecs, who used it to make chocolate drinks.

The flesh of the fruit can also be eaten, and it has almost a buttery texture. Mamey is packed with vitamins such as Vitamin C and A and it’s a good source for magnesium, iron, and copper as well as B6. 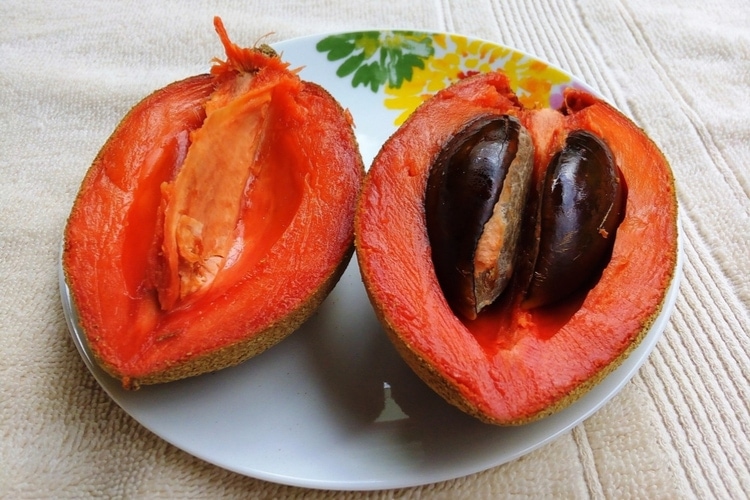 Avocadoes are cultivated and sold in many countries around the world, but it’s believed to have originated in Mexico. It’s one of the superfoods that comes with many benefits after consumption.

The Avocado is also the national fruit of Mexico, and of all the places I’ve eaten avocado in the world, I ate the best ones when I was living in Mexico for two months! Avocadoes are also used to make the famous guacamole. 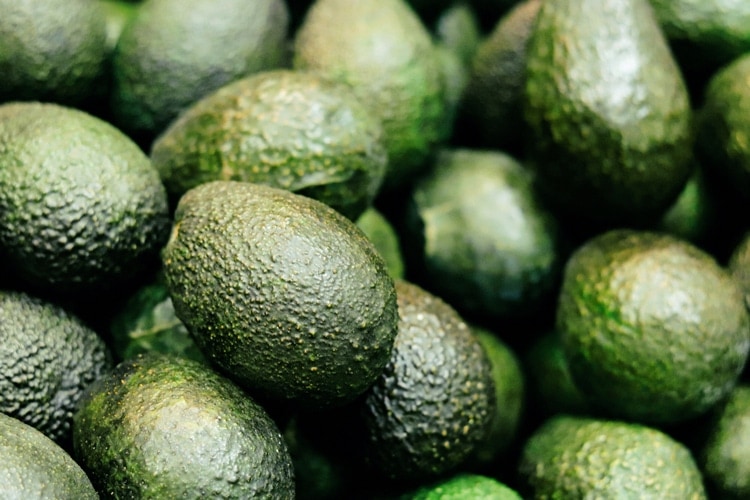 This Mexican Fruit is also known as prickly pear, and they grow on the Nopal plant. There are more than one hundred species of Nopal that are endemic to Mexico, and the fruits, known locally as tuna have its peak season from September to December, although it’s typically available year-round. 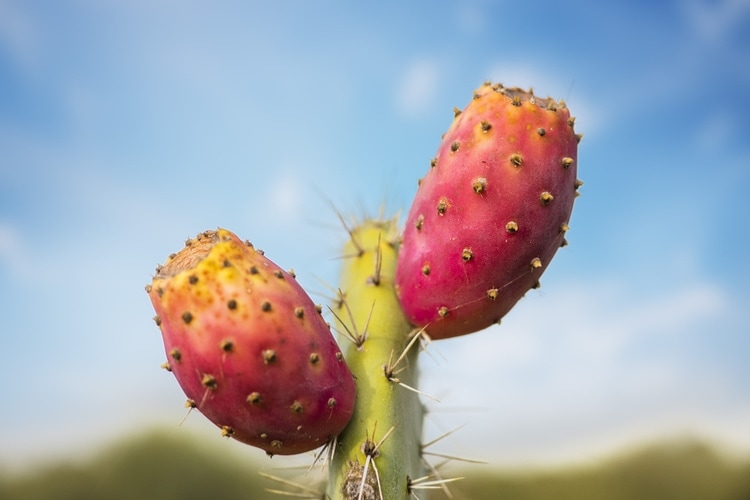 Maracuyá is basically a type of passion fruit which is grown in Mexico and commonly used for juices or as a mixer for mescal. Some Mexicans also eat them raw with chili and lime. It’s related to the Granadilla, which is sweeter than Maracuya. 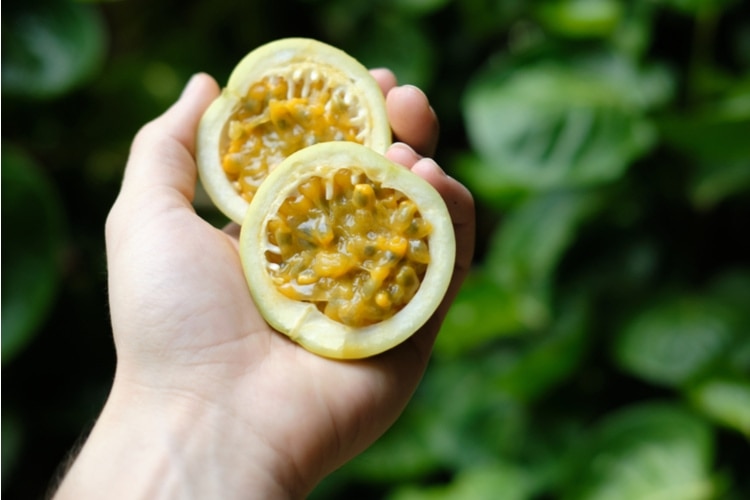 Pitaya is one of the most characteristic Mexican fruits and is commonly known as Dragon fruit in other parts of the world. It’s a cacti fruit that is endemic to Central America, although it’s grown extensively in Southeast Asia as well.

There are three types of Pitaya, and the main difference between these is the color of the flesh. The texture is somewhat similar to a kiwi. 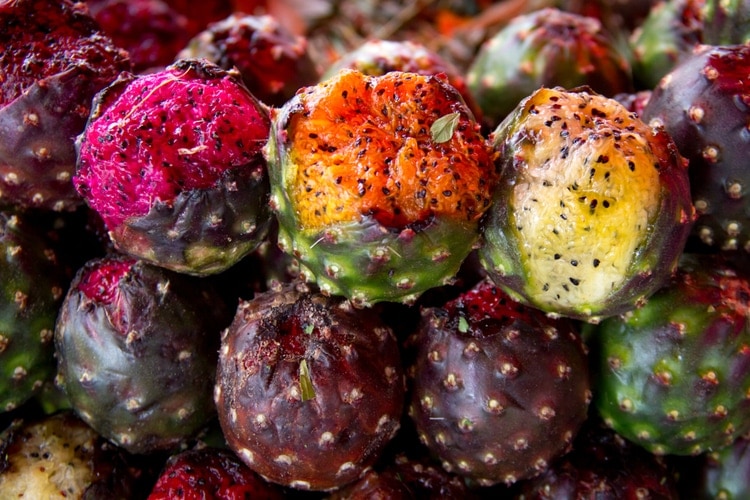 The soursop fruit grows naturally in Mexico and has a flavor that tastes like a mix of apples and strawberries with citrus notes. It’s quite juicy on the inside and it’s packed with Vitamin C.

The Spanish name for the fruit is guanábana and it’s usually in season from June to September. 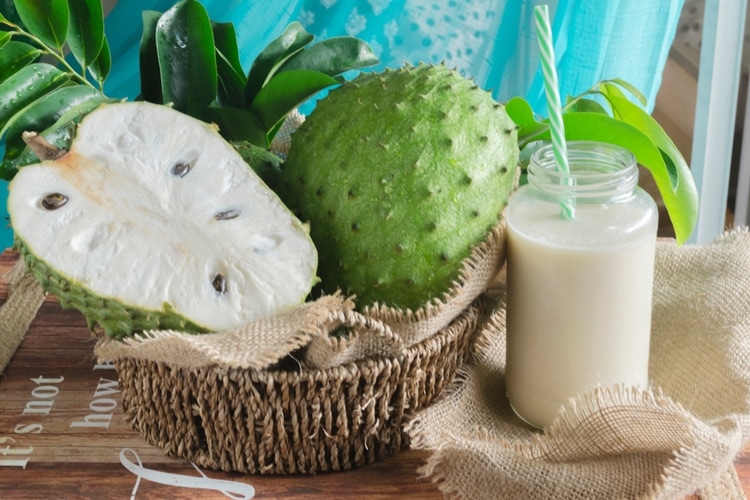 Huayas are especially popular on the Yucatan Peninsula, and are somewhat similar to lychees and rambutans, although it is native to Central America.

They are also known as Guayas, and it’s a popular fruit to make jam. You’ll likely not find this Mexican fruit in the supermarket, only in small markets. It’s a cheap and delicious snack that doesn’t cost more than 10-20 pesos for a bunch of Huayas. 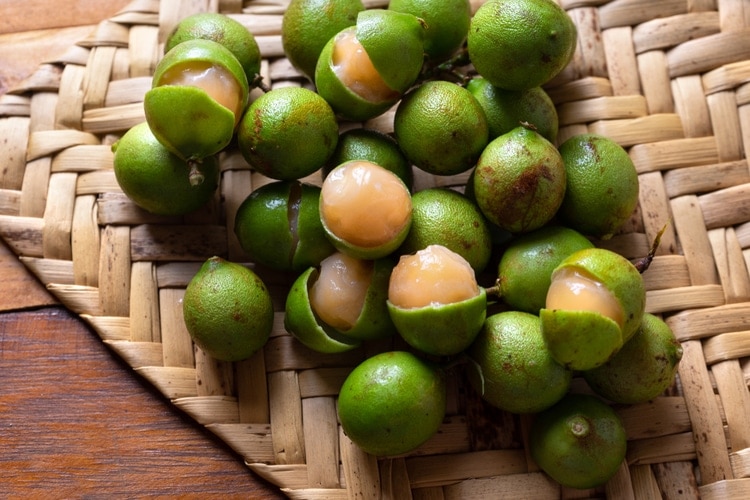 You have most likely eaten chilis before in your life, but some of the hottest and most delicious chilies are grown naturally in Mexico. There are more than 150 varieties available, and they all have a unique role within the Mexican cuisine with various ways to prepare them.

Poblano, Ancho, Habanero, Jalapeño, Guajillo, and Chipotle are some of the most famous Mexican chilies. 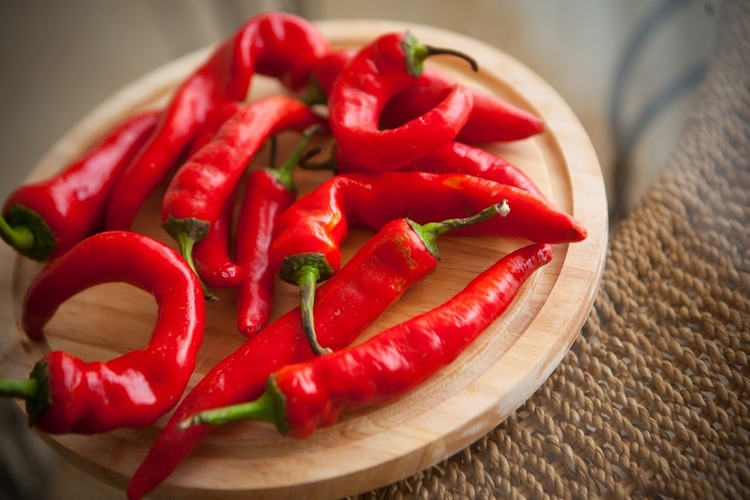 It’s not only the tuna (prickly pear) that Mexicans eat from the Nopales plant, the leaves are also being plucked and prepared. They are commonly used in salads and it’s definitely something unique to try from the local cuisine. 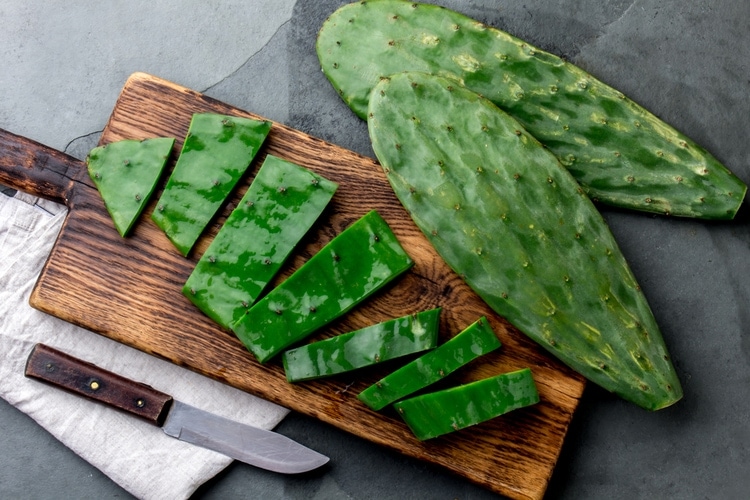 Cherimoya is related to Soursop but is generally known for being superior when it comes to flavor. Just like the soursop, it’s rich in antioxidants such as Vitamin C.

If I were to describe the taste of Cherimoya it would be something of a mix with papaya, banana, and pineapple. 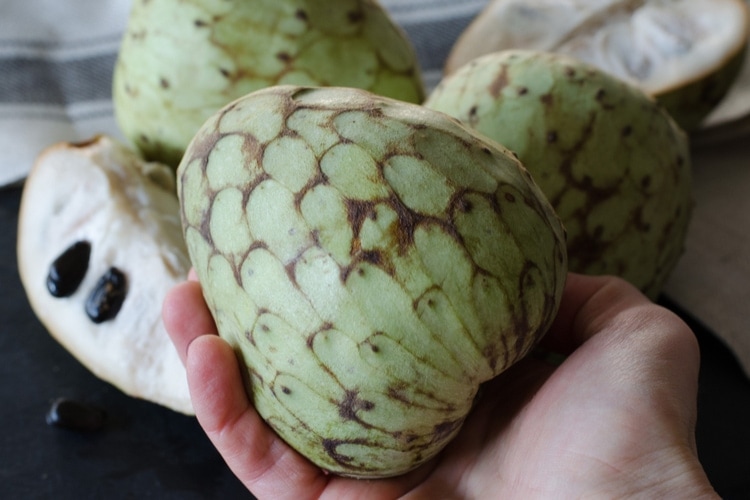 The Nanche fruit is often eaten raw or cooked as dessert, and can typically be found in local markets from August to September. It’s very rich in Vitamin C and just 100 gram contains as much as 111% of RDA. 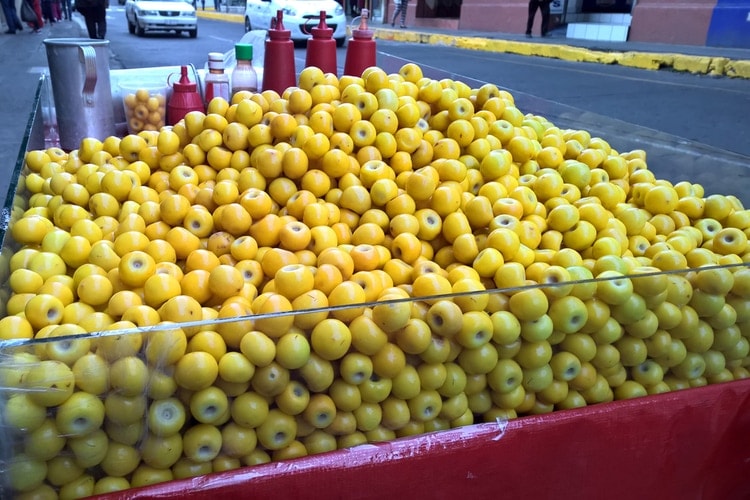 Tejocote is one of my favorite fruits from Mexico, and it’s a native species of hawthorn which grows in the mountains of Mexico. They can be eaten raw, but actually taste better when cooked since it gets sweeter when cooking. 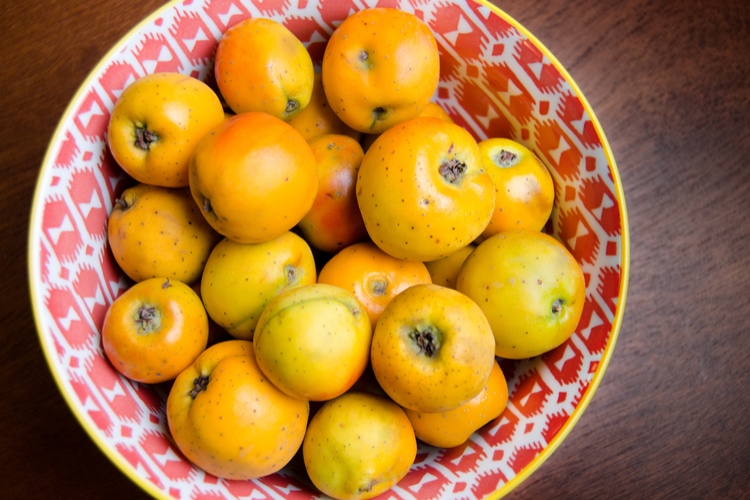 Jocote fruits are native to Central America, and they have been used in medicine and for food for thousands of years by the indigenous people. The Jocote fruit is rich in Vitamin C, A, and B as well as various minerals.

It has a sweet taste, somewhat similar to a plum, and its pulp is yellow when it’s ripe. 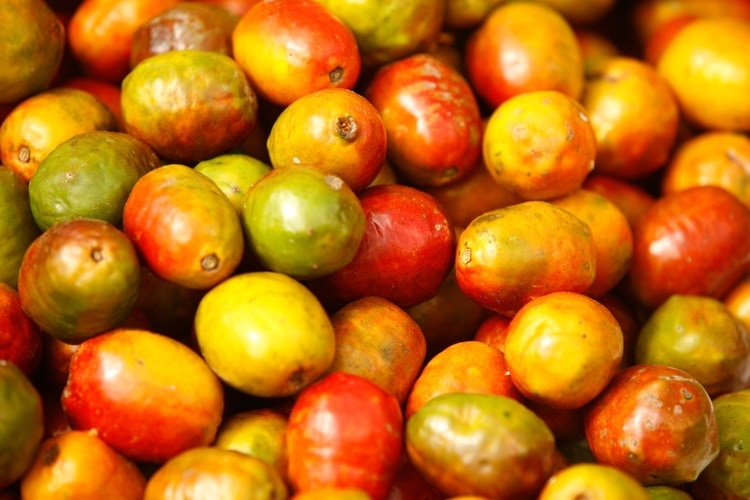 Mango is native to South Asia, but the mangoes grown in Mexico are delicious and shouldn’t be missed. The Ataulfo mangoes are in season from March to September and are primarily grown in Jalisco, Michoacan, Sinaloa, Veracruz, and Chiapas.

It’s a sweet variety that is well-paired with some chili served on a stick. 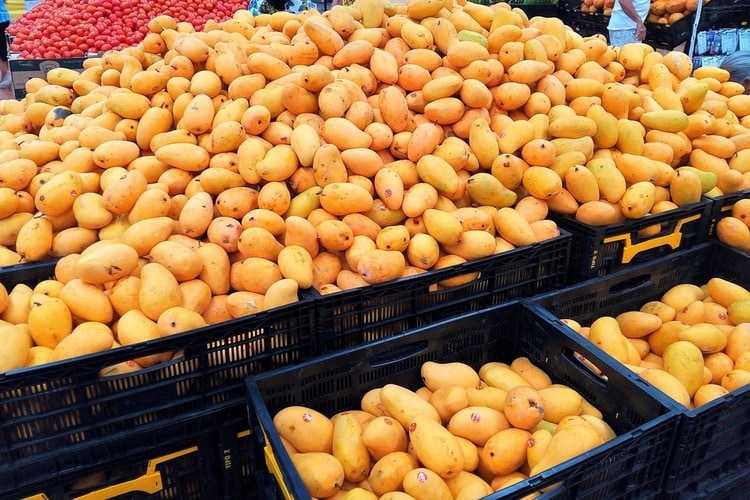 Pomegranate is grown in many places and sold all over the world, and it was introduced in Mexico sometime in the 1600s. It’s usually in season from late summer to early fall, although it’s available throughout the year.

This fruit is also an important ingredient in the traditional dish Chiles en nogada. 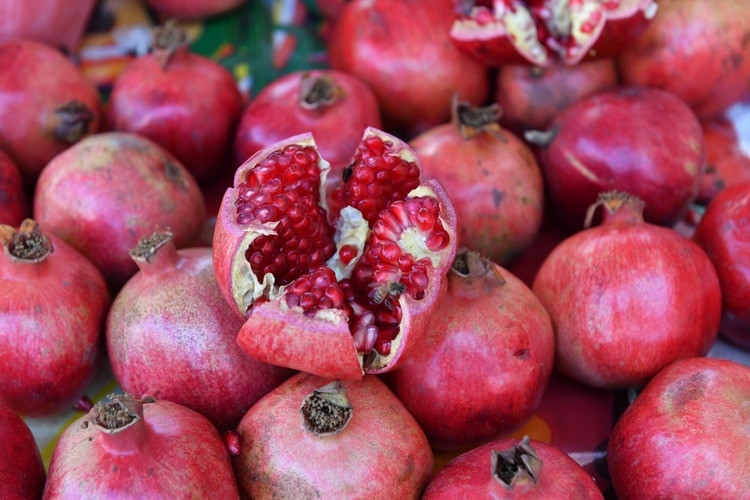 Where to buy fruit in Mexico

The best Mexican fruits are found at the local markets and roadside stalls selling fresh produce directly from the farms.

Supermarkets usually have high-quality as well when it comes to local fruits from Mexico, but in general, it’s cheaper and better to buy them from vendors in the local markets. 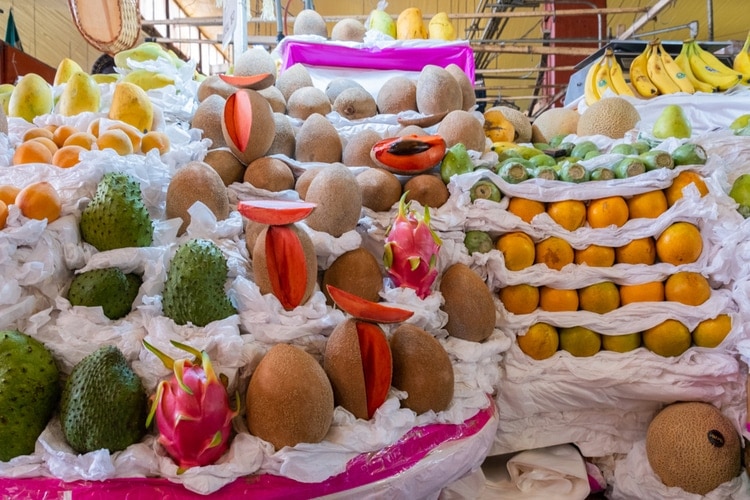 Thanks to the warm and tropical climate in most parts of the country, there is a wide variety of exotic fruits in Mexico that most tourists won’t have in their home country, or at least not the same quality and freshness.

There is a long tradition of cultivating tropical fruits in Mexico and some have been grown since prehistoric times. Many fruits are also native to the region although most of them are grown in various plantations these days.

What is Mexico’s national fruit?

The Avocado is the national fruit of Mexico.

Can you bring fruits from Mexico to USA?

Some fruits that are grown in Mexico are allowed to enter the USA, but they should always be declared to customs upon entry regardless if the Mexican fruit is allowed to be brought to the U.S or not. 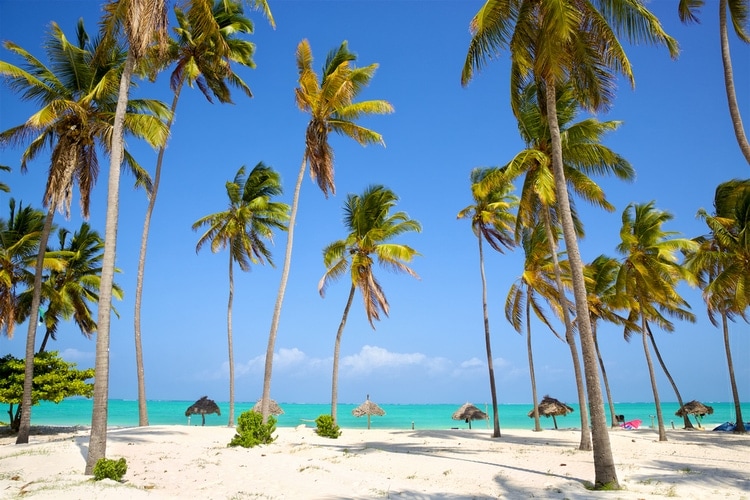 Where is it hot in December? 15 Warm Places with Sunshine
← Read Last Post 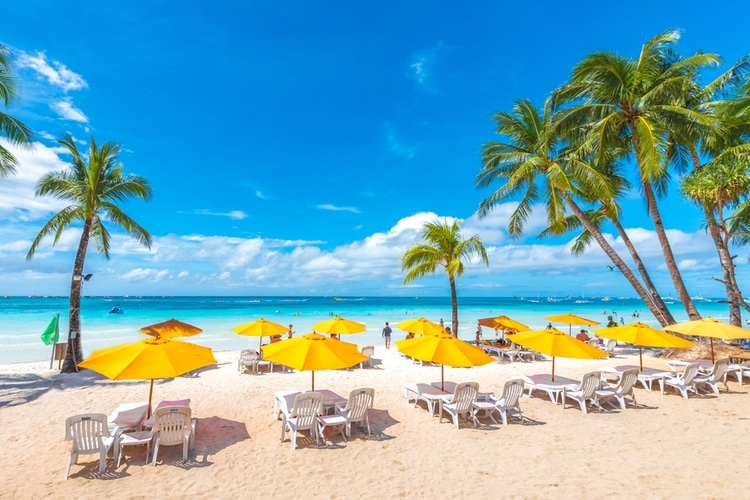 Where is hot in February? 15 Warm places with sunshine
Read Next Post →
Click here to cancel reply.