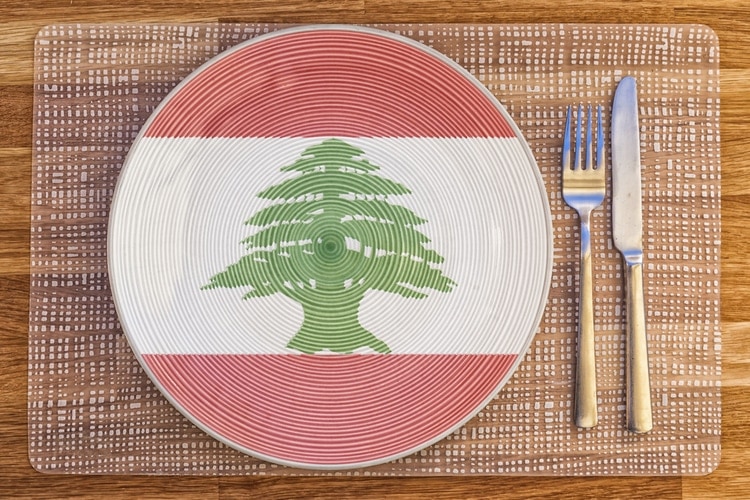 Want to know more about Lebanese food? Here’s a list of traditional dishes from Lebanon and more information on Lebanese cuisine.

Sfiha is a popular meat pie that can be found in Lebanon as well as other Middle Eastern countries. It’s a common street food which is both cheap and quick to make.

The filling is most often made from lamb or beef that is mixed with tomatoes, onions, pine nuts, salt, pepper, and sometimes dried chili. These savory pies are then baked in an oven like a pizza and can even come with toppings such as cheese, curd or vegetables. 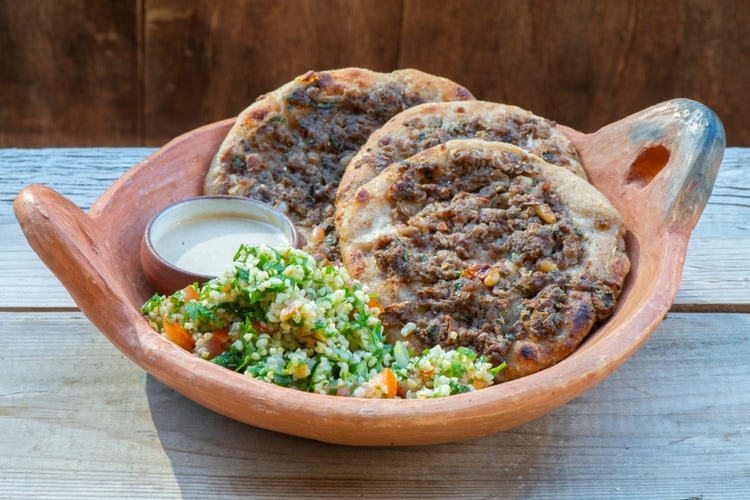 Fatteh can be eaten for breakfast or served as a main dish, and the literal meaning in Arabic is crushed or crumbs. It’s a Levantine dish with ancient origins that consists of fresh or toasted flatbread that is covered with various toppings. 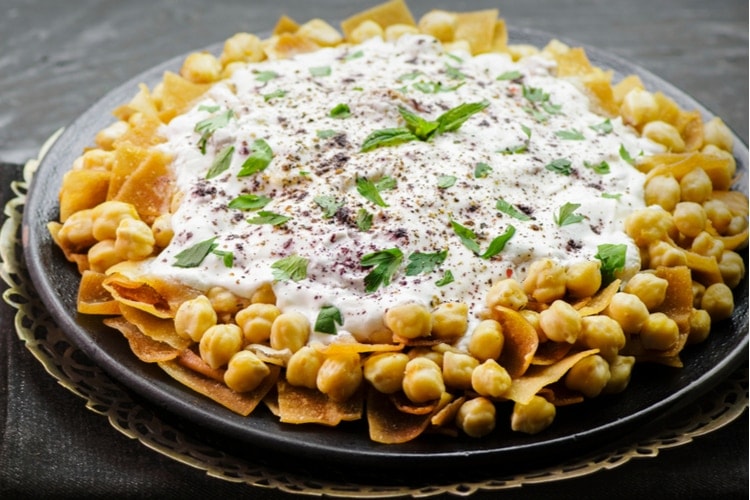 Kibbeh is another Levantine food that is very popular in Lebanon as well as all over the Middle Eastern region. It’s often considered as the Lebanese national dish and can be described as a type of meatballs or patties.

It’s very popular and it’s made from bulgur groats, minced onions and ground meat, such as beef, lamb, goat, or even camel meat. There are other versions of Kibbeh as well, such as Potato Kibbeh and Pumpkin Kibbeh. 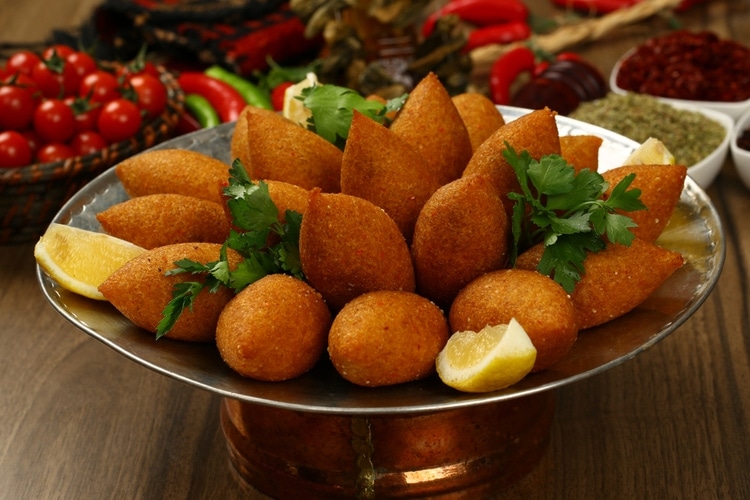 Tabbouleh is one of the most famous dishes from Lebanon, and it’s a versatile salad that goes well as a side dish or appetizer. It’s easy to make and the main ingredients include chopped parsley, tomatoes, mint, lettuce, garlic, onion, and bulgur.

The ingredients are mixed together and seasoned with lemon juice, olive oil as well as salt and pepper. Tabbouleh is very fresh and healthy, which has made it popular in the Western world in recent times, although it has been served in Lebanon and Syria since ancient times. 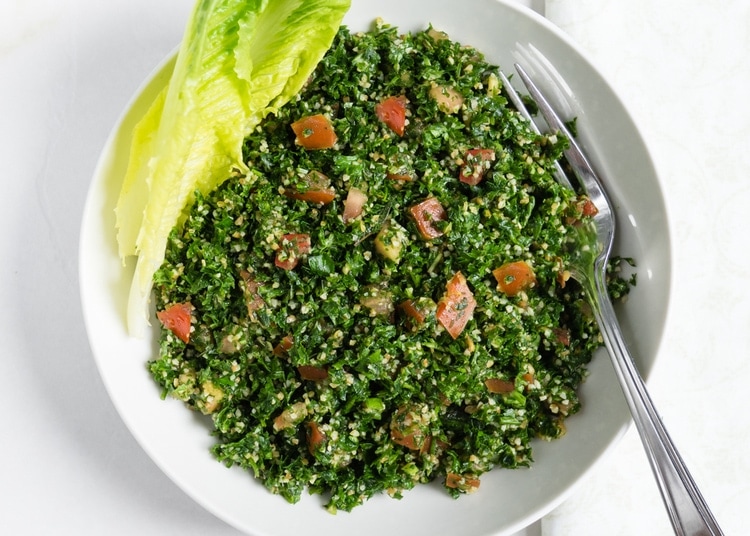 Manakish can be described as the Lebanese pizza, and it’s made of dough and topped with cheese, thyme, and ground meat. Today, there are many different kinds of toppings, including za’atar, cheese, chili, and spinach.

A unique aspect of Manakish is how the dough is rolled flat before small holes are made, which allows the toppings to come inside the bread. It’s a delicious type of fast food in Lebanon and they are very tasty and relatively easy to make at home as well. 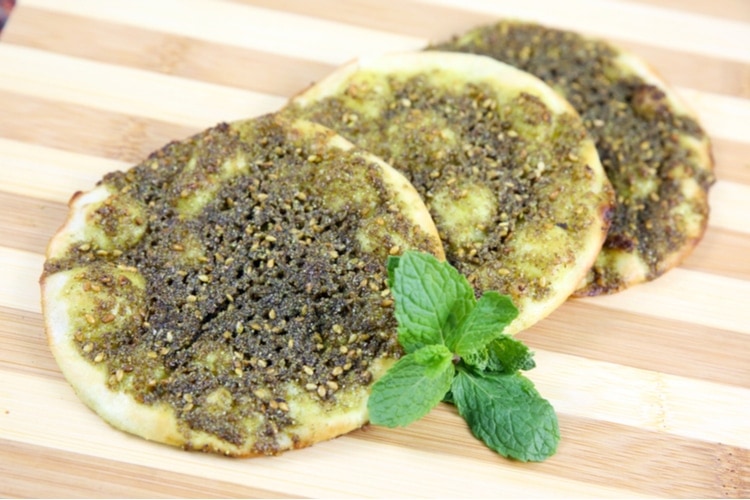 Shawarma is common in all countries in the Middle East, and it’s a long-time favorite and fast-food in Lebanon. The meat is slowly roasted on a vertical and rotating rotisserie.

Traditionally, shawarma was made from lamb or mutton. However, these days, it can be anything from beef to chicken. It’s typically served in a flatbread such as laffa or pita together with vegetables, onions, and sauce.

Sayadieh Samak is a Lebanese dish with fish and rice, which is somewhat similar to biryani, although with different flavors. Fishes that are typically used when making Sayadieh Samak include Snapper, Raquette, or Grouper.

It’s very popular in the summer and commonly served at most beachfront restaurants in Beirut. Sayadieh Samak can be prepared in various ways, but most recipes include toppings with toasted pine nuts, olive oil, and sumac. 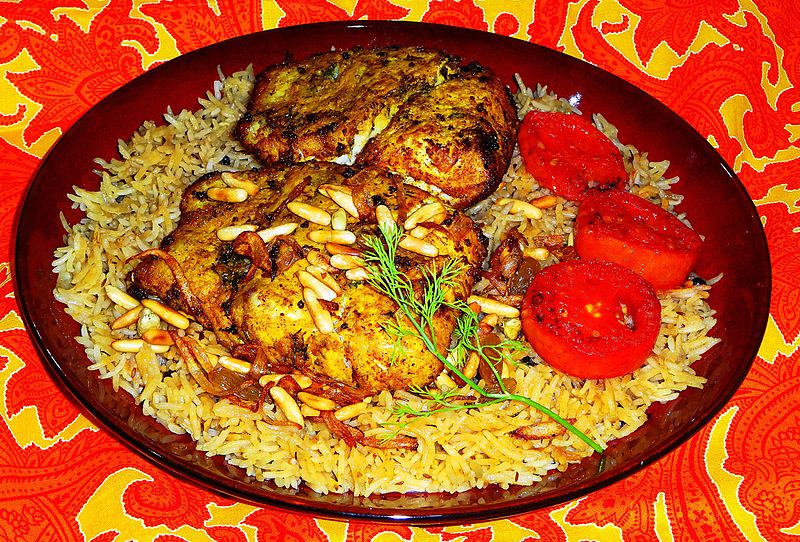 Lebanese food often includes meat, although there are some vegan and vegetarian options available as well. Falafel is one such example, and it’s made from chickpeas or fava beans, or alternatively a mix of both.

The beans are grounds and then rolled into a patty and seasoned with parsley, garlic and other spices such as coriander and cumin. They are deep-fried in a special pan. Falafel can be served in pita bread or on a platter with vegetables. 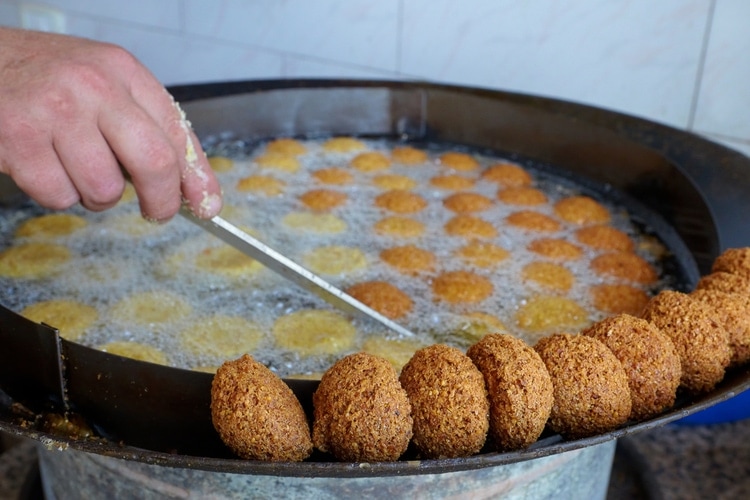 Baba Ganoush is one of the most iconic foods from Lebanon. It consists of mashed eggplant (cooked), tahini, olive oil, lemon juice and seasonings which are mixed together. Making it traditionally involves baking or broiling the eggplant over an open flame.

Baba Ganoush is often served as a side dish, mezze or simply to dip with pita bread. It’s one of my personal favorites, and it’s relatively easy to make at home as well. 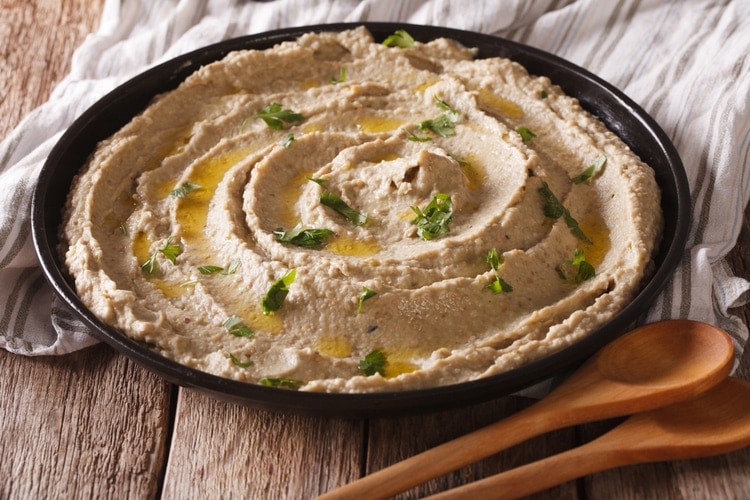 Shish Tawook is basically chicken skewers that have been marinated and grilled. They can be served on a platter or in bread, but it’s most commonly served along with fresh vegetables on the side as well as toum, hummus, and tabbouleh.

The chicken is marinated for several hours before grilling, which makes the meat really juicy. The marinade can differ somewhat depending on region and personal preference, although garlic and lemon are most common.

Fattoush is a traditional salad from northern Lebanon where the primary ingredients being mixed greens and vegetables together with fried or toasted pieces khubz. Common vegetables used in Fattoush include tomatoes, cucumbers, and radishes, which are cut in large pieces. 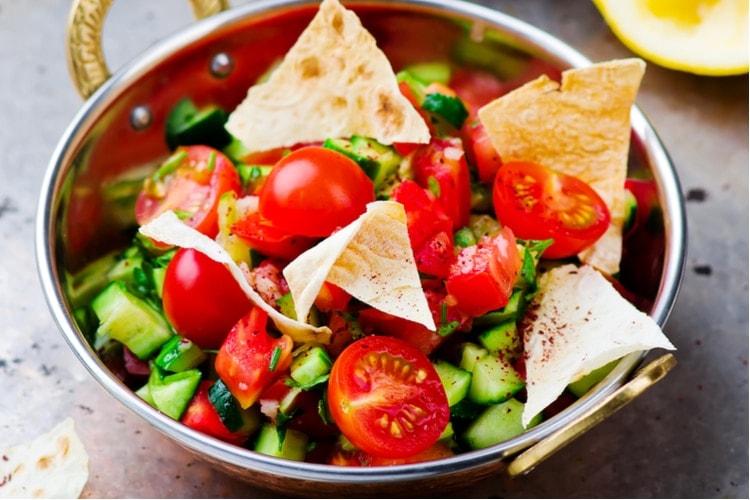 Lebanese stuffed Kusa, also known as Kousa Mashi is basically stuffed zucchini, filled with a mix of meat and rice as well as garlic and dried mint. This is a classic dish that has been passed down from generation to generation, and the type of zucchini used is typically only available during the summer. 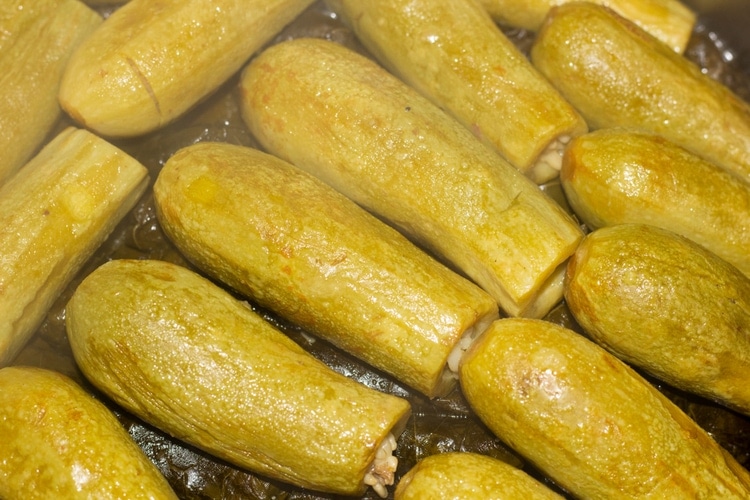 Kibbeh Nayyeh is often served as mezze and it’s made from raw minced lamb mixed with spices and fine bulgur. It often comes with green onions, olive oil, mint leaves and some Lebanese bread on the side. 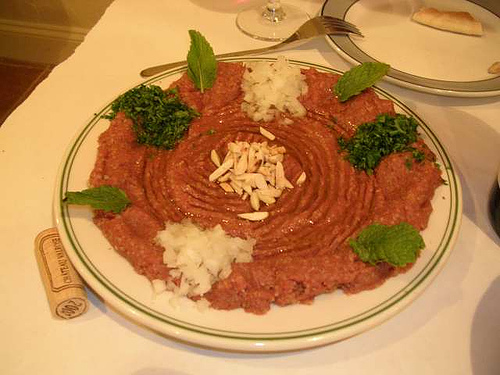 Some of the traditional dishes from Lebanon dates back thousands of years in time, to the Levantine cuisine. Throughout history, it has been influenced by various eras such as Roman, Ancient Egyptian, Babylonian, Assyrian, Hittite, and Phoenician rule.

In recent times, it has especially been influenced by the Ottomans, who controlled Lebanon for 400 years, between 1516 to 1918. After that, the country was controlled by France, which introduced some of the French cuisine.

Some of the most iconic dishes from the Lebanese cuisine include Baba Ganoush and Tabbouleh. 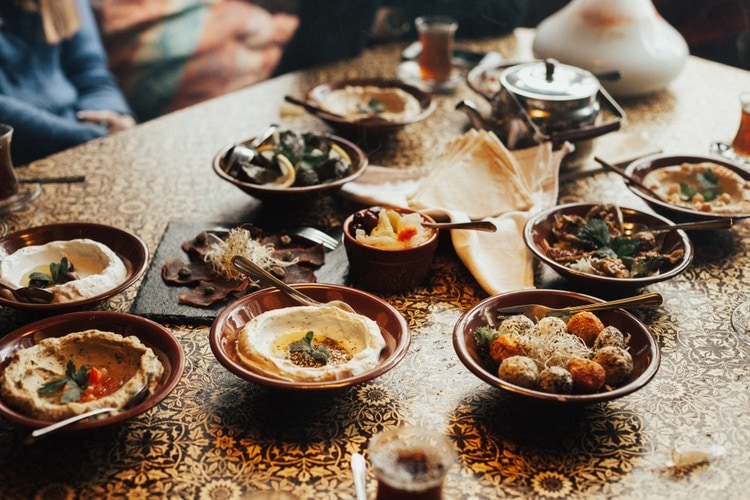 Beans, tomatoes, cucumbers, mint, parsley, zucchini, aubergine, tahini, and hummus are all common ingredients in Lebanese cooking. Poultry is more commonly used as a source of protein, but lamb, goat, and beef are also common.

Food from Lebanon is typically very healthy and well-balanced.

What is traditional Lebanese food?

Mezze is a typical dining experience in Lebanon, where many smaller dishes are served and shared. At restaurants, the number of plates with mezze can range from 20-30 individual dishes, and for large gatherings, it can be up to 60 dishes.

What is a Lebanese breakfast?

A traditional Lebanese breakfast can include ful moudammas, Lahm Baajine, Eggs, Knefe, Manakish, and a full Labne w Jebne. Many locals also drink a cup of Lebanese coffee for added energy in the morning.

What is your favorite food from Lebanon? Leave a comment below! 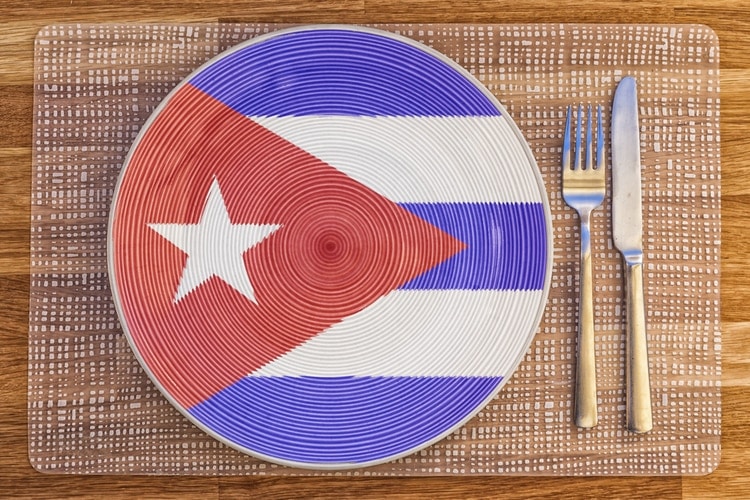 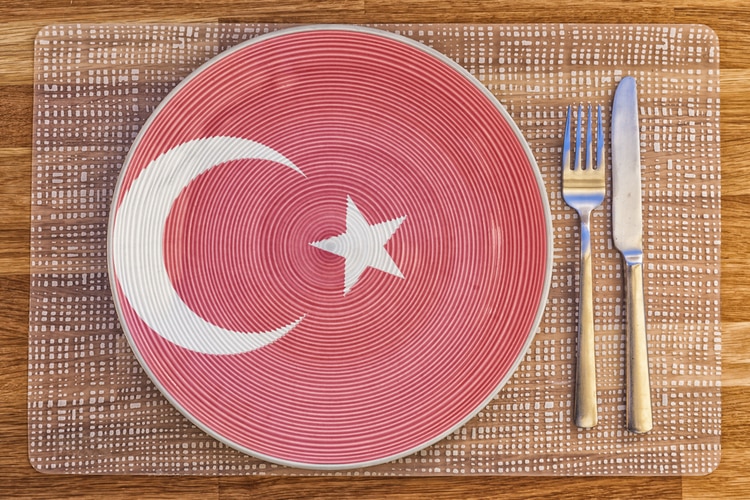