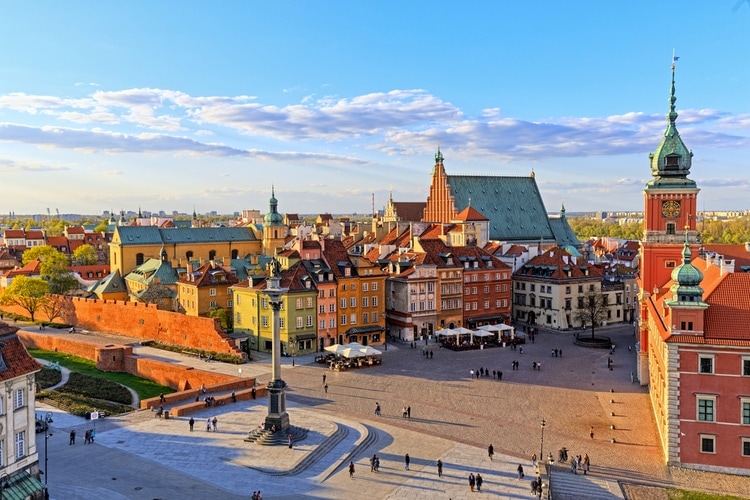 Want to know more about the largest cities in Poland? Here’s an updated list, ranked by size and population in 2020.

The country is separated into 16 administrative areas and covers a total area of 312,696 square kilometers (120,733 square miles). Poland is a developed country and operates the largest stock exchange in Central Eastern Europe.

Warsaw is the capital of Poland located on both banks of the Vistula River in central-eastern Poland. With a population of 1,783,529 and spanning over an area of 199.71 square miles, it is the largest city of the country. Warsaw is an international tourist destination with its historic old town designated a UNESCO World Heritage Site.

Furthermore, it is the main economic hub of Poland and a major international center of research and development. The Warsaw Stock Exchange is a more than 200-year old institution and the largest and most important stock exchange in Central Eastern Europe The Polish media industry is also based in the city.

Kraków is the second-largest city of Poland with a total population of 774,839. It is also one of the oldest cities in the country. Kraków was the official capital of Poland until 1596.

Kraków’s extensive cultural heritage can be witnessed through its Gothic, Renaissance and Baroque architecture with several notable places of interest spread across the city including the Wawel Cathedral and the Royal Castle on the banks of the Vistula River, the St. Mary’s Basilica, Saints Peter and Paul Church, and the Rynek Główny.

Kraków is home to Jagiellonian University, one of the oldest universities in the world and traditionally Poland’s most reputable institution of higher learning. In 2000, Kraków was named European Capital of Culture and was officially approved as a UNESCO City of Literature in 2013. 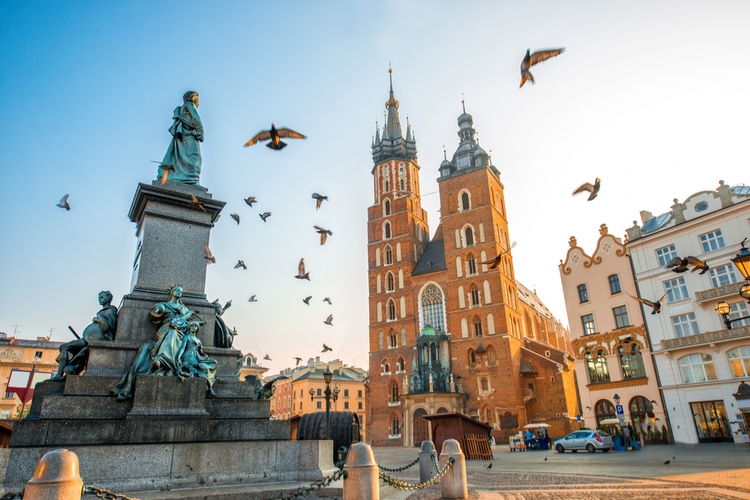 Łódź is located in the central region of Poland. It has a population of 682,679 making it the third-largest city in the country. It is the capital of Łódź Voivodeship. Łódź experienced rapid growth in the cloth industry and in population due to the inflow of migrants, most notably Germans and Jews.

The city was infamous for its inequality which is reflected by the architecture with luxurious mansions coexisting with redbrick factories and rundown apartments and houses.

Łódź grew to be one of the largest Polish cities and one of the most multicultural and industrial centers in Europe. Łódź is most well-known for the National Film School, which was the birthplace for the talents like Roman Polanski. It was named a UNESCO City of Film in 2017. 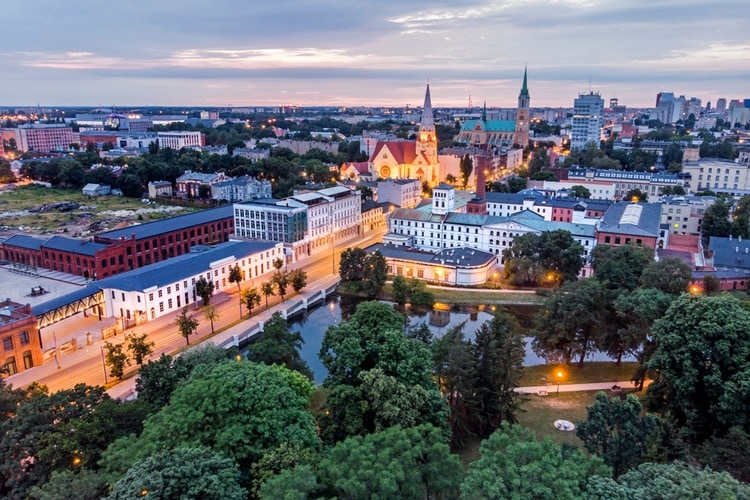 Wrocław is a city in western Poland located on the banks of River Oder. It is the largest city in the historical region of Silesian Lowlands of Central Europe. The population of Wrocław in 2019 was 641,607, making it the fourth-most populous city in Poland. Wrocław is the historical capital of Silesia and Lower Silesia.

Today, it is the capital of the Lower Silesian Voivodeship. The history of the city can be traced back to more than a thousand years with its long heritage combining almost all the religions and cultures of Europe.

Wrocław is a university city with a student population of over 130,000. The city is home to the  University of Wrocław, a famous institute of higher learning that has produced 9 Nobel laureates to date. 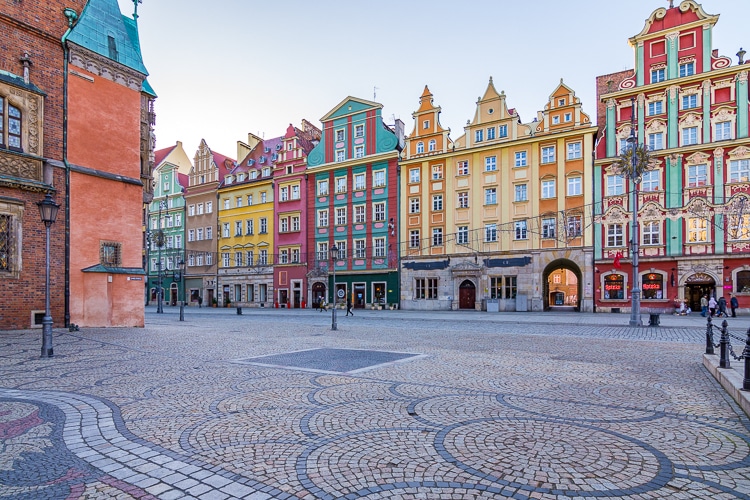 Poznań is located on the Warta River in the central-western region of Poland. With a population of 535,802, it is the fifth-largest city in the country. Poznań is an important regional center of culture and business. It is among the oldest and largest cities in Poland. It is the historical capital of the Greater Poland region and is currently the administrative capital of the Greater Poland Voivodeship.

Adam Mickiewicz University, the third-largest university in the country, is located in Poznań. The city is also the seat of the oldest Polish diocese, now being one of the most populous archdioceses in the country.

The city also hosts the Poznań International Fair which is the biggest industrial fair in Poland and one of the largest fairs in Europe. Some of the most renowned landmarks of Poznan include the Town Hall, the National Museum, Grand Theatre, Poznań Cathedral, and the Imperial Castle.

Gdańsk is a city in northern Poland. It is the capital and largest city of the Pomeranian Voivodeship. With a population of 468,158, it is the sixth-most populous city of Poland and the country’s principal seaport.

The city is situated on the southern edge of Gdańsk Bay on the Baltic Sea. Gdańsk lies at the mouth of the Motława River. Together with the nearby port of Gdynia, Gdańsk is also a notable industrial center.

Gdańsk is home to the University of Gdańsk, the Gdańsk University of Technology, the National Museum, the Gdańsk Shakespeare Theatre, the Museum of the Second World War, the Polish Baltic Philharmonic, and the European Solidarity Centre. 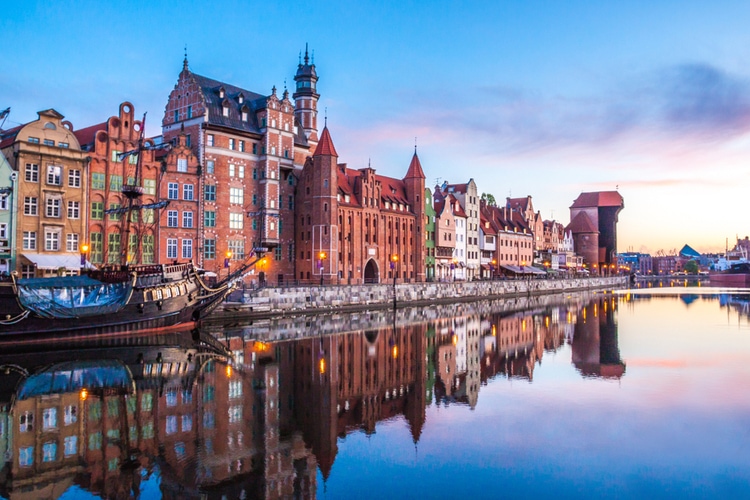 Szczecin is the capital and largest city of the West Pomeranian Voivodeship in Poland. With a population of 402,465, it is the seventh-largest city of Poland and another major seaport of the country. The city is situated along the southwestern shore of the Dąbie Lake, on both sides of the River Oder.

It is the administrative and industrial center of the West Pomeranian Voivodeship and home of the University of Szczecin, the Pomeranian Medical University, the Maritime University, and the Szczecin Art Academy. Szczecin has also served as the headquarters of NATO’s Multinational Corps Northeast since 1999.

Bydgoszcz is the eighth-largest city of Poland located in the northern region of the country. The total population of the city is 350,178. It is the seat of Bydgoszcz County and the capital of the Kuyavian-Pomeranian Voivodeship. It is also the largest city of the historical region of Kuyavia.

Bydgoszcz is called Little Berlin due to its neo-gothic, neo-baroque, and modernist architectural styled buildings. Bydgoszcz is home of Casimir the Great University, the University of Technology and Life Sciences, and the Medical College of Nicolaus Copernicus University.

Most Populated Cities in Poland

Here’s a list of the largest cities in Poland, ranked by their total number of inhabitants.

How many of the largest cities in Poland did you know about? Leave a comment below! 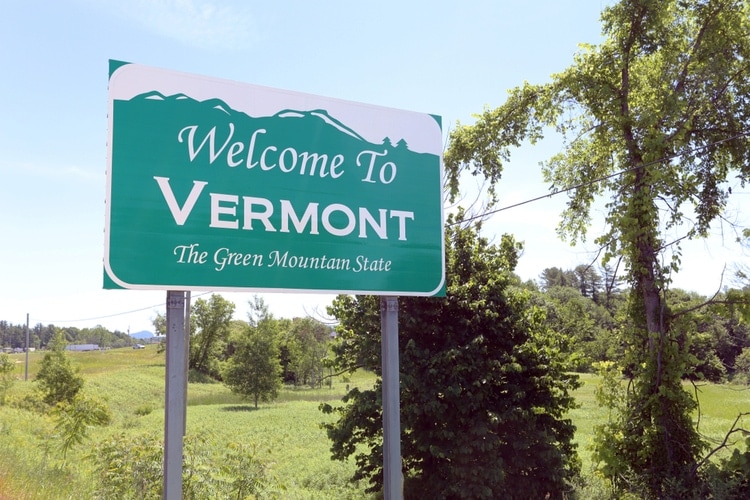 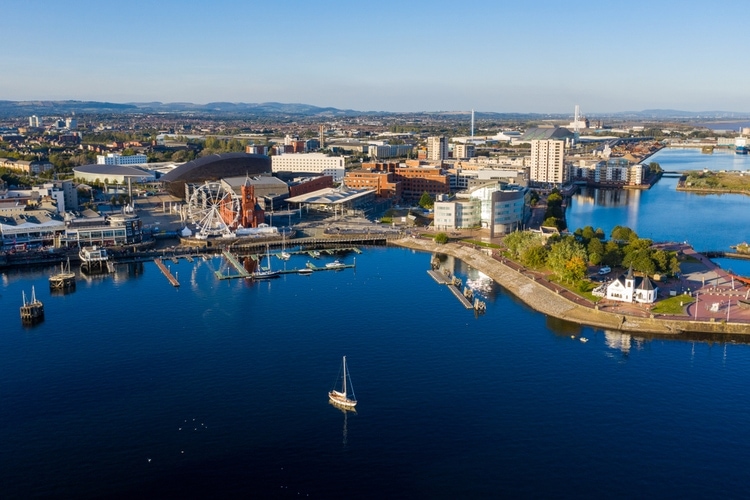