Kawasan Falls and how to get there from Cebu or Oslob 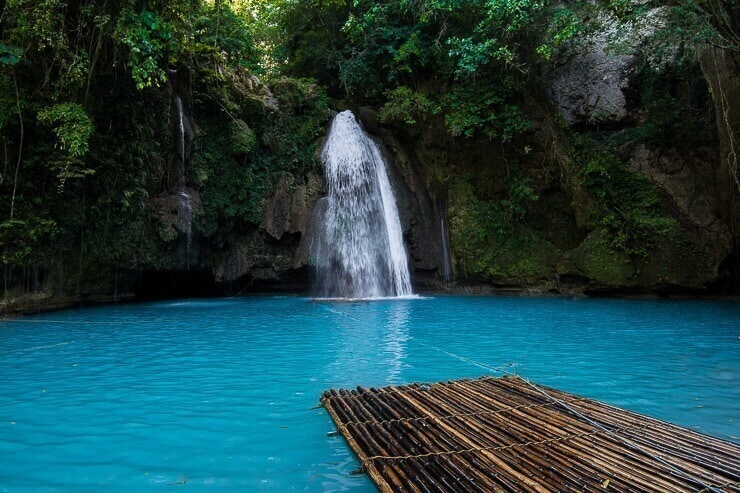 Kawasan Falls is one of the most famous waterfalls in the Philippines, especially in Cebu along with Tumalog Falls.

Here awaits turquoise blue water where you can swim around and relax.

For those who are more adventurous, one could also embark on a bamboo raft and go for a ride under the waterfall and at the same time receive a tremendous neck massage by the pouring water. 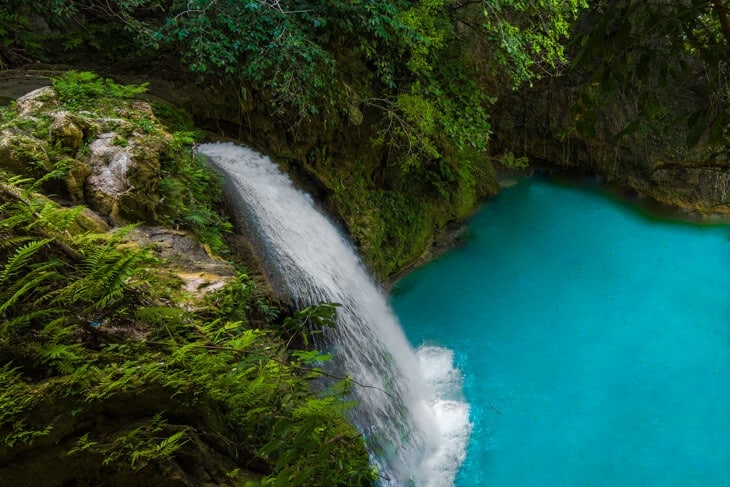 How to get to Kawasan Falls

From Cebu City to Kawasan Falls

The buses are running from Cebu City to Kawasan Falls, are starting from the South Bus Terminal. You can take all of the buses going to Bato (via Barili).

It is very important that you take the bus to Bato via Barili since the other bus from Cebu to Bato is via Oslob and it stops instead on the east side (Kawasan Falls is located on the west).

If you are not sure which bus or where it departs from, just ask a guard or a bus driver. Everyone is friendly and helpful, so no problem there.

When you enter the bus, you could also ask the conductor or the bus driver to notice you when you’re arriving at Kawasan Falls.

I went with the bus company Ceres (yellow buses). However, several bus companies run the same route. The price for a bus with air conditioning is 150 pesos from Cebu City to Kawasan Falls (March 2016).

The bus journey takes about 3 hours but can vary depending on how much traffic there is. 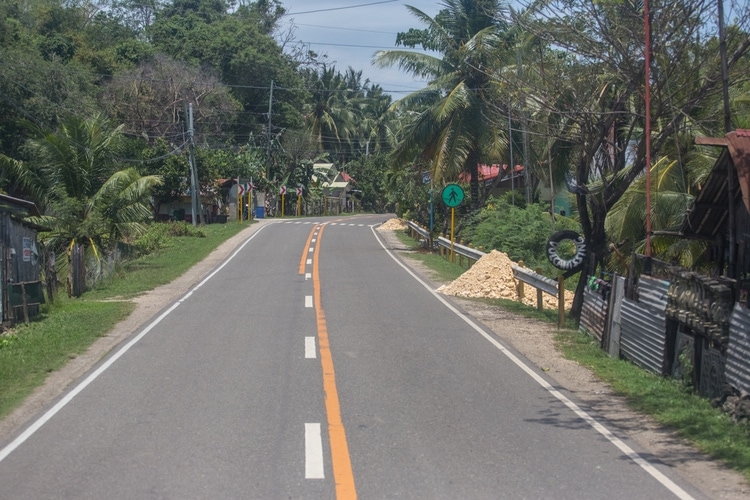 From Oslob to Kawasan Falls

From Oslob, you should first take a bus to Bato and then change to a bus that goes to Badian or Cebu City (via Barili).

The journey takes about 1.5 hours, and the total price is around 100 pesos.

From Moalboal to Kawasan Falls

Another popular destination is Moalboal, and from here it’s also quite easy to get to the falls of Kawasan.

Due to the short distance, it wouldn’t be that expensive to take a taxi from Moalboal. However, there are local buses that depart as well.

From the bus stop to Kawasan Falls

When you jump off the bus from Cebu, just walk a few meters ahead and look for a giant billboard with pictures of the waterfall and a large text that says “This Way to Kawasan Falls”.

If you arrive by bus from Oslob is the sign and the road to the waterfall just behind the bus where it stops.

When jumping off the bus, it’s likely that some locals come up and ask if you need a guide or something similar. Just say no thank you, and follow the road.

Some of them argue that the road is dangerous and that it is necessary to have a guide not to get lost. These statements are not true, the road is safe, and it’s easy to find the waterfall.

After paying the admission fee of 40 pesos and following the trail for about 10 minutes, you will arrive at the first waterfall. The first one is the largest and most famous waterfall (picture on top).

This is the waterfall that most people refer to as Kawasan Falls, and it’s very beautiful, and the water is just as turquoise as the pictures, but to be honest, you shouldn’t expect a quiet paradise.

Kawasan Falls is a popular attraction both among locals and tourists, and it’s rare to get a quiet moment here.

When looking at pictures, it’s easy to fantasize about a serene and calm paradise, but behind the cameras, there are restaurants, table and chairs, and sellers who offer you to go out on the bamboo raft or to eat at their restaurant.

With that said, it’s still an amazing waterfall, and it’s fun to go for a swim, but it is not as peaceful as in the pictures. Expect a beautiful place with lots of people, and you will not be disappointed. 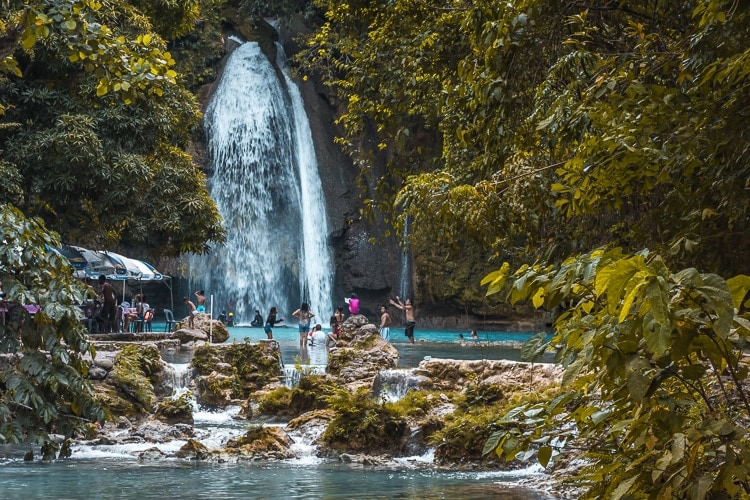 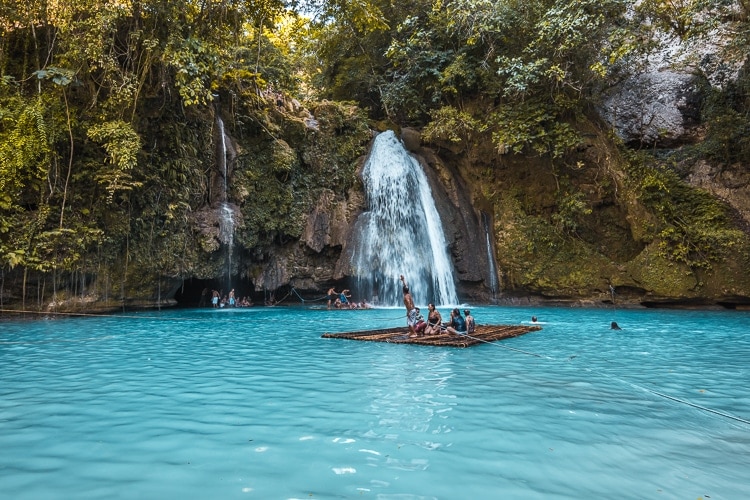 At the end of the first waterfall, stairs are leading up to the second waterfall. What you will find is a smaller waterfall with crystal clear turquoise water.

It’s much quieter up there, and for the one who longs for an adventure, it’s also possible to do some canyoneering.

For those who are adventurous by itself can even go up to a third waterfall, but the way up is quite steep.

The third waterfall is a rather tiny one, and personally, I do not think it’s worth the effort to get up there. 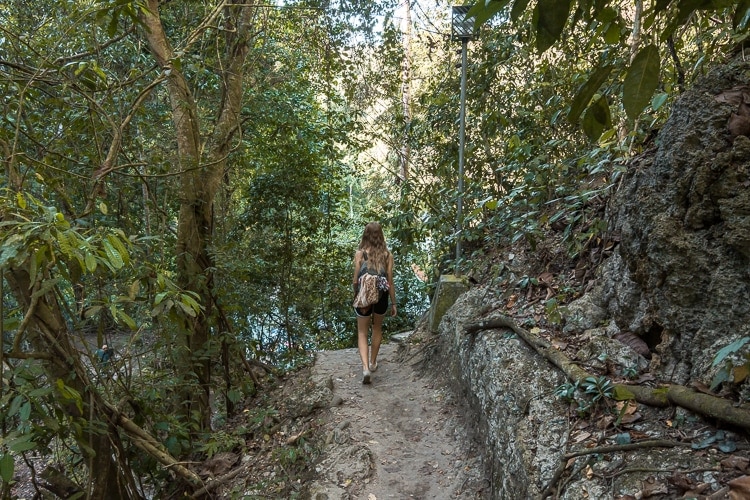 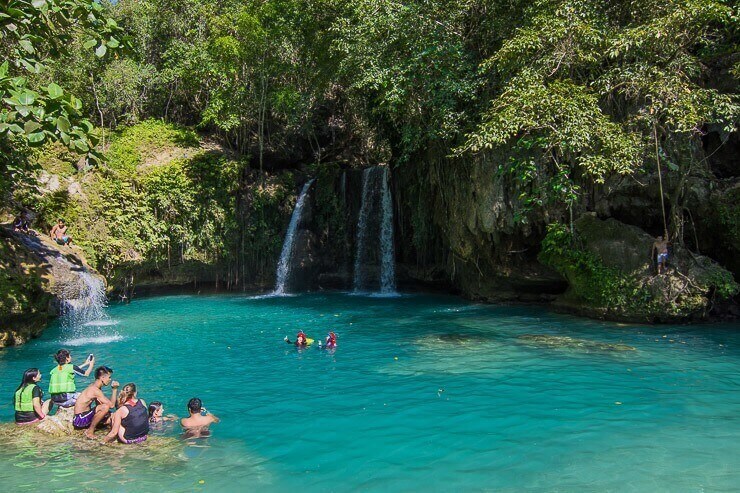 If you’re adventurous, you shouldn’t miss out on some canyoneering while visiting this place. If you have your own equipment it’s possible to do it on your own.

Otherwise, don’t hesitate to contact a tour company before, or when you arrive as there are rental gear available to visitors of Kawasan Falls.

It’s located about 130 km southwest of Cebu City and about 60 km from Oslob. The Kawasan Falls is located in the mountains of Barangay Matutinao, Badian, and when you get here, it’s about a 1.5 km walk from the entrance where the bus stops.

It’s possible to make an overnight stay here in some cottages for about 2500 Philippine pesos, and as stated before there are tables and bamboo rafts available for rent as well.

Most people come here for a day trip, and if you come here later in the day you should know that it gets quite dark when the sun sets.

You don’t have to be scared or anything, but it can be good to bring a flashlight if you stay until sunset since it will be dark on your way back.

The falls of Kawasan is a great day trip for families, couples, solo travelers and basically anyone who just wants to enjoy the beauty of nature and maybe even some adventure by canyoneering or swimming in the turquoise water.

Have you also been to the Kawasan Falls? Share your tips and experience below in the comment section! 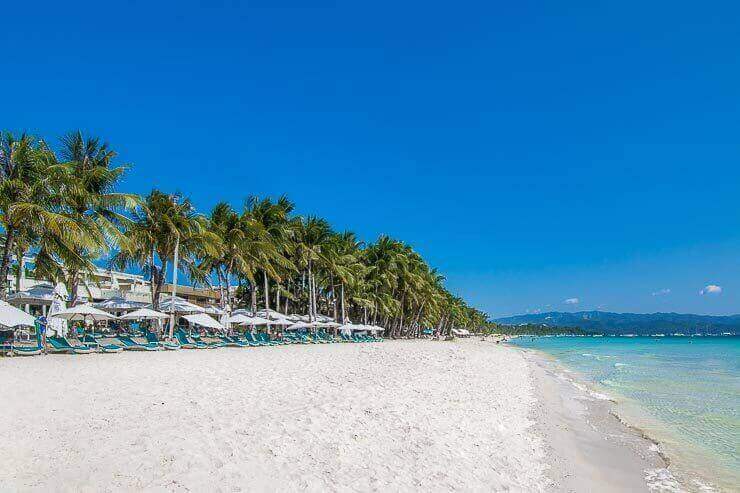 When doing the trek to the waterfalls are there many mosquitos on the path to get there? Just want to make sure so I can pack some bug stray.

Hello Jessica, I didn't notice more mosquitoes there than in other places in Cebu, but it's always a good idea to bring some bug spray in Southeast Asia.

Hi! Just wanna know if there are guides or people who offers canyoneering if you arrive on the falls? I'm planning to do DIY travel. Thanks.

Hello Ann, I think there's an option to book this upon arrival.

Hi, may i ask if there are life vest for rent there? Thank you.

Hi. Thank you for wonderful pictures and information. I'm in Panglao island now, and there is very few information online on how to get to Kawasan Falls written in Korean. One blogger went there by scouter. Do you know how to get there from Alona beach? Thank you again :)

You have a pretty interesting tips, and guide to kawasan falls Cebu City. Thanks ?