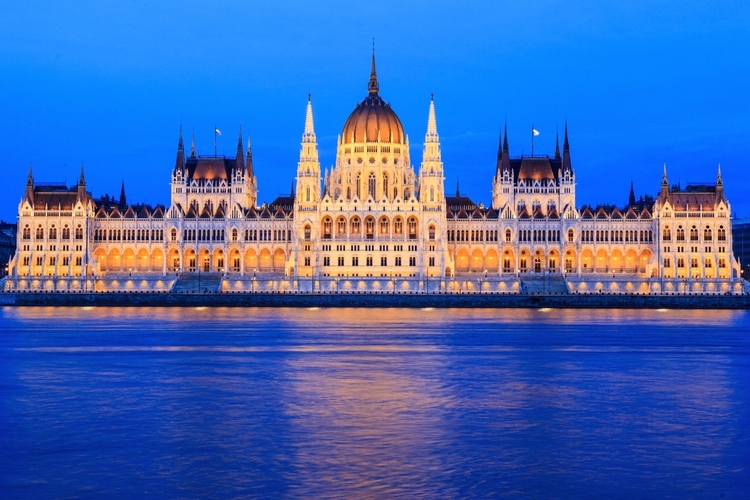 The Hungarian Parliament Building in Budapest is a national icon and one of the most impressive buildings in Europe, and perhaps even worldwide. It stands next to the Danube river and has long been a popular attraction in Budapest with thousands of visitors every day.

Here is an updated guide with information for visitors, including opening hours, ticket info and more about the Hungarian Parliament building itself and its history.

EEA* citizens are those whose home country is part of the European Economic Area.

Visits to the Hungarian Parliament Building take place daily at particular time slots throughout the day. English tour visits are available at the following times, from Monday to Sunday:

To reserve a place on one of these tours, simply book your ticket in advance online.

Note that during weeks when parliament is in session, some tour times may be canceled or rescheduled. Also, on national holidays (15th March, 20th August, and 23rd October) there are no guided tours.

The Hungarian Parliament Building also referred to as the Parliament of Budapest, is a notable landmark of Hungary and a popular tourist destination in Budapest.

To the locals, this glorious building represents national history, identity, and sovereignty. You’ll find the building in Kossuth Square, in Budapest’s 5th district aside the Danube River.

The structure that stands so gracefully over the banks of the Danube originally started as an idea in the 1800s. On the back of an economic boom, the local Hungarian government launched a competition to find an architect suitable to design a new parliament building.

Imre Steindl, a Hungarian native won the competition and took inspiration from London’s Houses of Parliament to create the diverse building you see today, which is an eclectic mix of neo-Gothicism, neo-Baroque, and neo-Renaissance architecture.

Today, tourists and locals alike are invited into the parliament building on a 45-minute guided tour of the Main Staircase, The Great Hall of the Cupola, The Holy Crown and the Jewels of the Hungarian Coronation, the Hall of the Old Chamber of Los Lores, and the Hall of Sessions of the High Chamber. 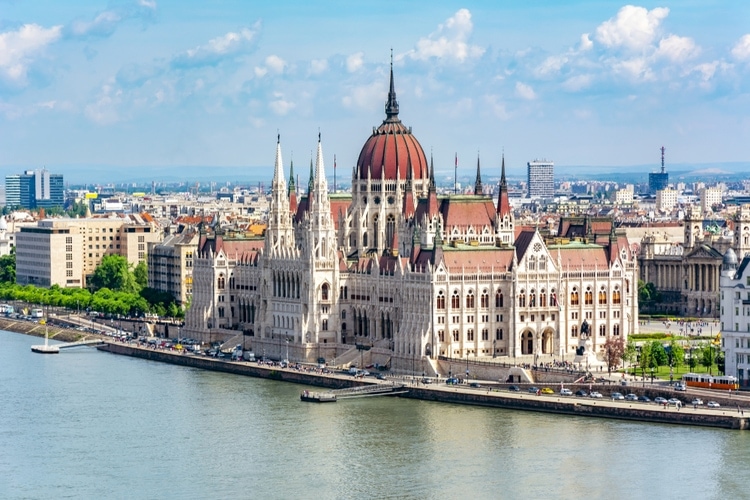 Upon entering the building, visitors can walk up the great ornamental stairs adorned with a red carpet. Make sure you look up to admire the frescoes on the ceiling.

The hexadecanoic (sixteen-sided) central hall is one of the building’s most impressive rooms and has huge chambers adjoining it. Make sure you stop to look at the Holy Crown of Hungary which has been on display here since 2000.

The Crown Jewels are located in the Dome Room and are guarded at all times by two soldiers (the jewels have been lost and stolen numerous times, and were only returned back to Hungary in 1978). 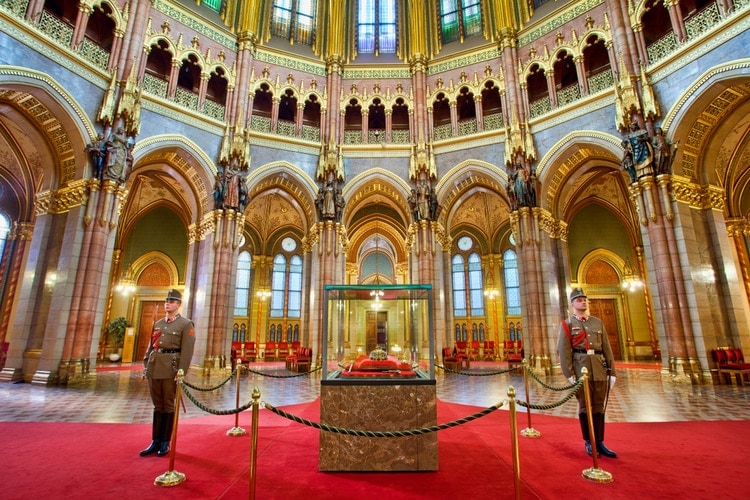 How to get to the Hungarian Parliament

The Hungarian Parliament Building sits alongside the River Danube just a 10 – 15-minute walk from the famous Chain Bridge. If arriving on foot, note that the entrance to the building is found on the opposite side to that which runs parallel to the River Danube.

If you’re arriving from areas outside the city center, consider taking public transport. The metro (take the red Metro line to Kossus Lajos Square) and the Tram (take the tram to stop number 2, Kossuth Lajos Ter) are both quick and easy ways to arrive at the Hungarian Parliament Building, and both are relatively low cost. 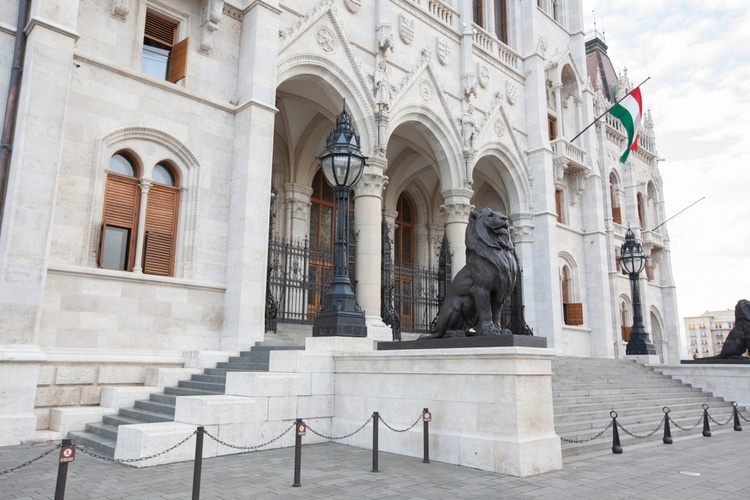 There’s plenty of attractions, monuments, and things to do in and around the area. The below attractions are all less than a mile away from the Hungarian Parliament Building and can easily be accessed on foot:

When the National Assembly is in session, the building is closed for visits. To avoid crowds, try avoiding school holidays and book on an early morning tour.

The best time and place to photograph the parliament building is at sunrise, from the opposite side of the Danube river, either from the riverbank to get the reflection, or from the top of the Fisherman’s bastion – where you get a panoramic view of the Hungarian Parliament building. 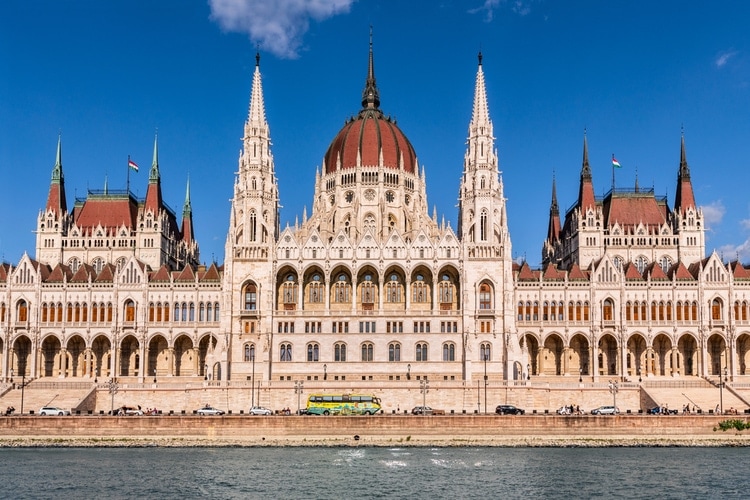 Who can visit the Hungarian Parliament Building?

Any person can visit, with the previous purchase of a ticket.

How far in advance can I purchase my ticket?

Tickets to the Hungarian Parliament can be purchased up to 3-6 months in advance.

How will I receive my ticket?

Within a few hours of purchase, your ticket will be emailed to you.

What does my entry ticket include?

All entry tickets include the right to enter permitted zones of the Parliament Building and a guided tour of the building in your chosen language.

What time should I arrive?

In general, it’s okay to arrive at the Parliament Building 5-10minutes before your tour. However, keep in mind that there’s usually a queue to get in and you must arrive in time to join the back of your allotted queue (they correspond to the time of your booking). Note that your group will not be able to wait for you should you be running late.

How long does a guided tour last?

Can you visit the Hungarian Parliament on days when Plenary Sessions take place?

Yes, but the number of tours on that day will be reduced.

Do I need to bring my passport to enter?

Yes. Security Control requires you to show an official document to prove your nationality and a passport is the best proof. But a valid international ID for EU-citizens also works.

Can I take pictures inside?

Yes, you may take photos inside the building, with the exception of inside the Great Hall of the Cupola where photos are banned.

What items are restricted from bringing into the Hungarian Parliament?

In general, it’s requested that visitors don’t take bin bags or any objects that can cause personal damages including penknives, knives, scissors, aerosols, etc.

Want more tips or information before visiting the Hungarian Parliament building in Budapest? Leave a comment below! 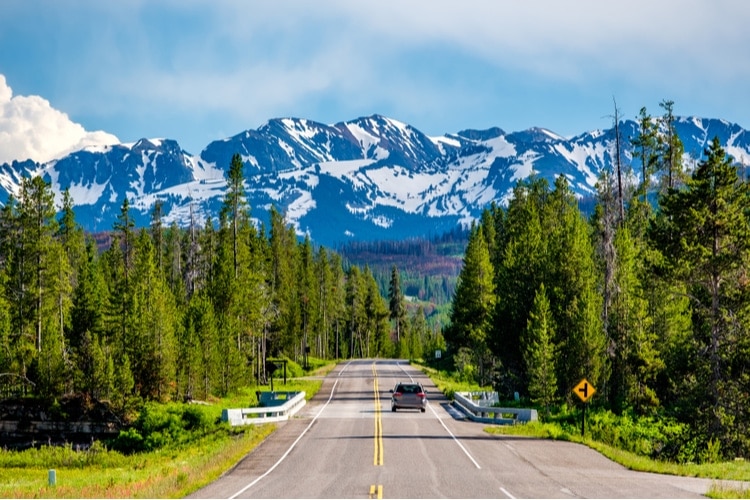