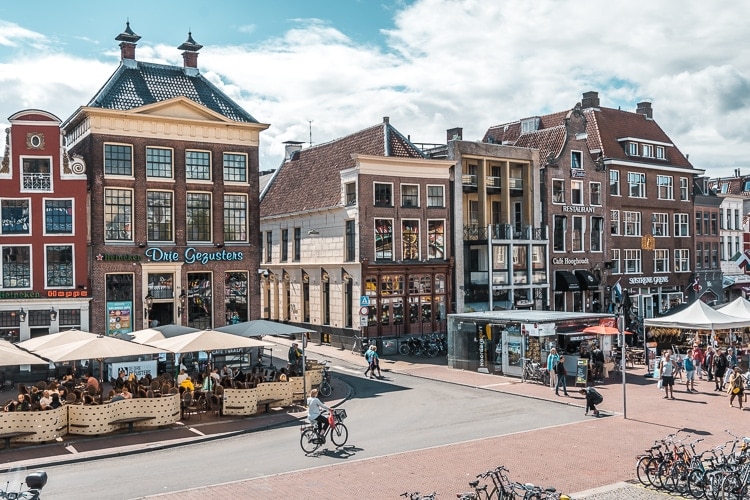 Groningen is a university town in Northern Netherlands that I visited this summer. Before I went, I knew very little about this city or what you could do there, but it looked nice in photos, and I had heard about it thanks to the Football team.

Here, you can read my best tips for the trip including tourist attractions, things to do in Groningen, How to get around, Flights to Groningen and of course hotel & accommodation + more information about the city itself.

It’s a lovely city with about 200 000 inhabitants, where circa 40 000 are students. That’s also why the average age is quite low here, but there are plenty of attractions and things to do for all ages. 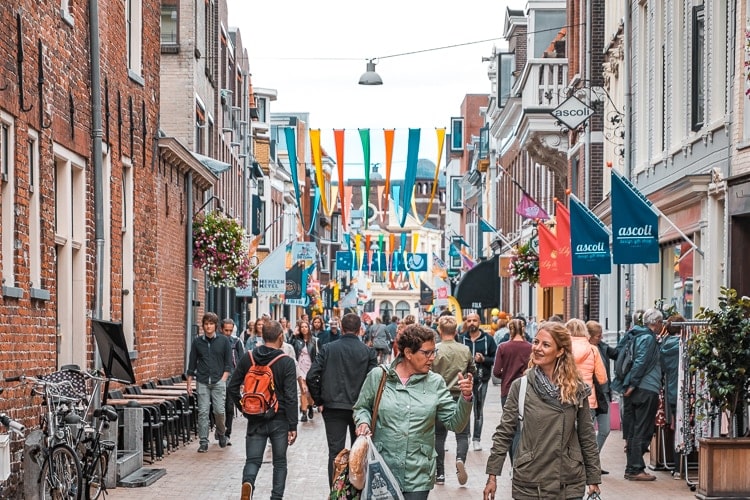 Groningen is an old city with lots of well-preserved architecture and beautiful buildings. Most of the attractions in Groningen are centrally located within walking- or biking distance.

A classic tourist attraction in Groningen that is nowadays a luxury hotel. Previously it has been the home of the Bishop, and later a military hospital in the 1800’s. It’s a historical building with a beautiful garden that is open to the public.

If you want to live a bit more luxurious in central Groningen, I can recommend booking a night at Prinsenhof. 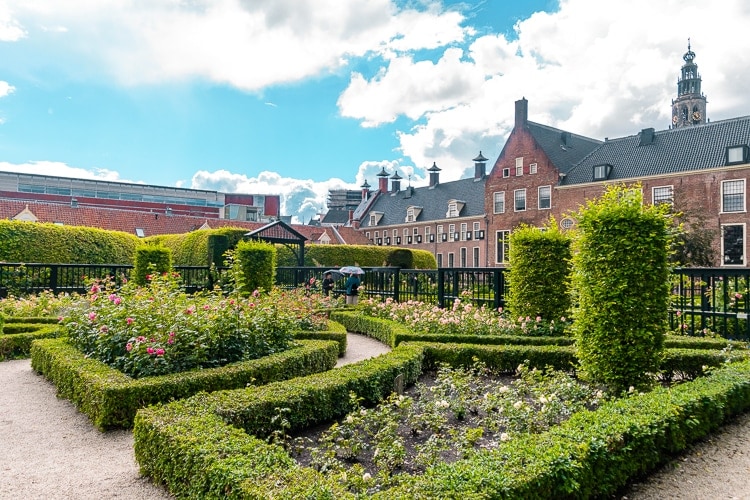 At the beginning of the 20th century, there were about 2400 Jews living in the city. Only a small part of the Jewish community survived the Holocaust. But the synagogue survived, and today it’s still an active religious center for the Jewish community.

This 97-meter tall tower is the pride of the city, and according to a local law, it’s forbidden to build anything higher than the Martinitoren. From here you get stunning views over the city. Next to the tower, you can also visit Martinikerk, which is the oldest church in Groningen. 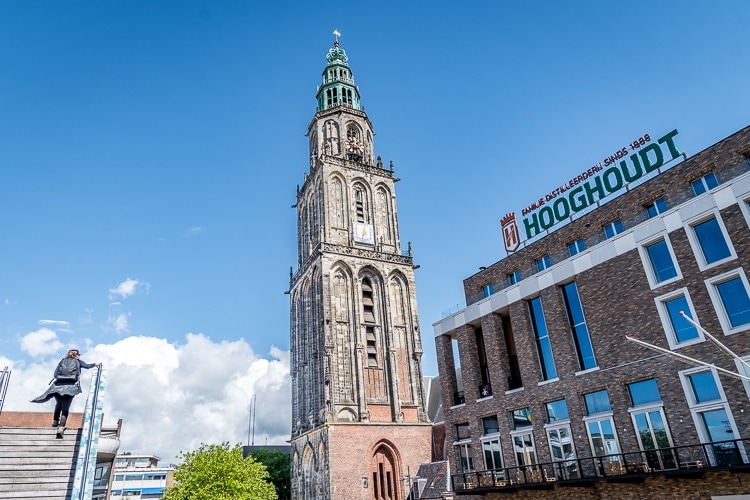 A popular tourist attraction in Groningen

This housing project is quite interesting as it’s built along the water in Scandinavian architecture. It’s a city marina where many locals have boats, and it’s definitely an interesting place to check out! 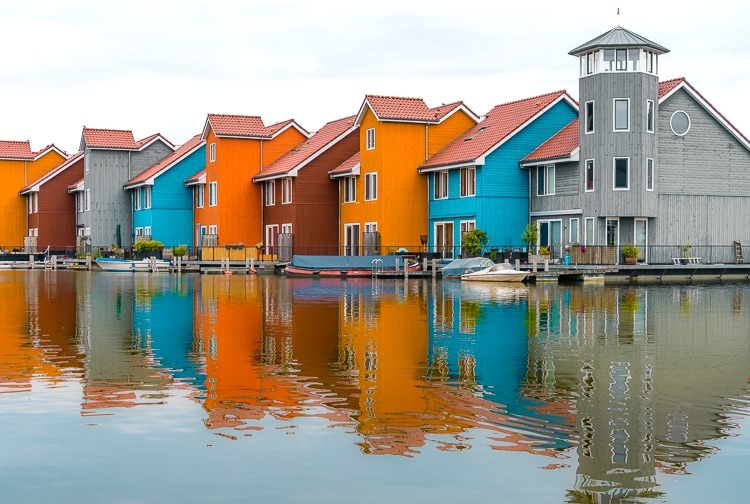 Another beautiful church in the central parts of Groningen that is worth visiting. 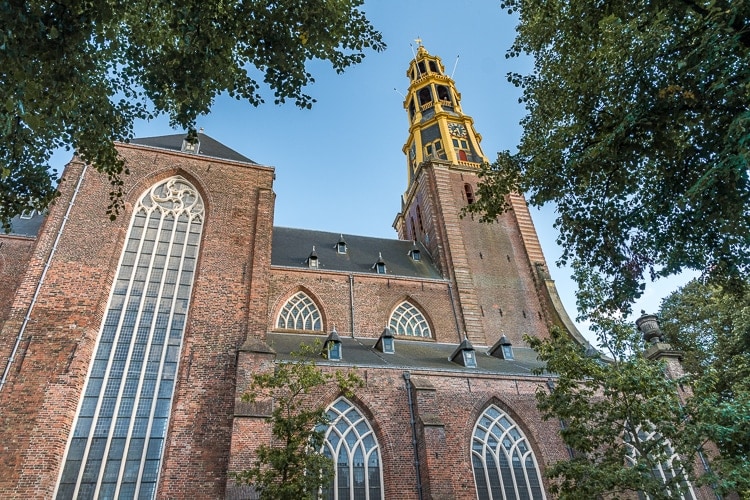 7 Things to do in Groningen

Stroll around the canals

There are several canals around the city center where the houses are beautifully lined up along the water together with boats and houseboats. The Canals of Groningen are surely one of the best things to see and perfect for a stroll when the sun is shining.

When you feel for a break or people watching, just sit down at a cafe or bar with outdoor seating. 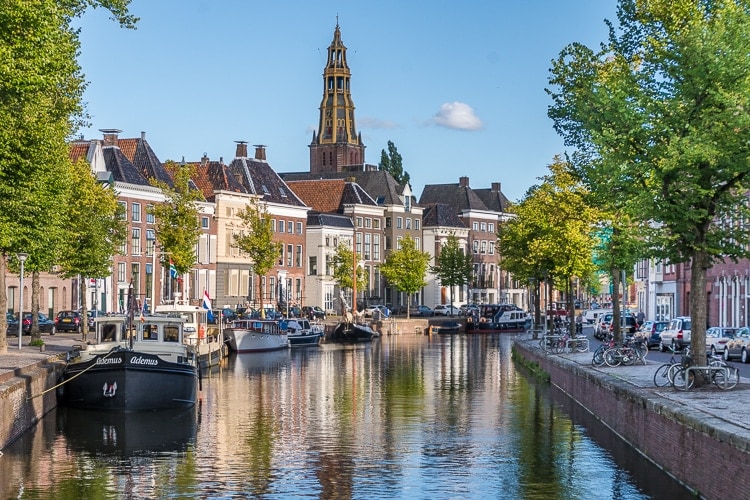 There are many breweries in Groningen, and lots of different local beers to try. When I and Christine visited Groningen, we also had the chance to make our own beer at Baxbier Brewery. A different, but fun experience if you travel to Groningen with a group of friends.

Bax Bier has also won several prizes for their beer.

Go to the beach

Beaches are probably not the first thing that comes to mind when thinking about the Netherlands, but Groningen actually has its own sandy beach in the central parts. It’s especially popular among the locals during the summer months.

The City beach is located behind “The Dot”. 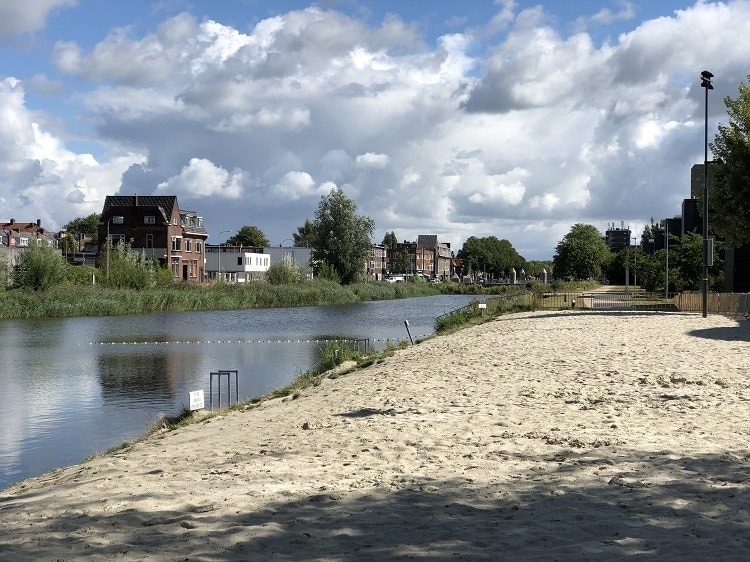 Grote Markt is the main square in town, and here you’ll find food trucks, bars, cafes and the food market that is held each Tuesday, Friday, and Saturday.

It’s also a nice place for people watching while sipping some drinks at one of the popular bars.

A night out at Mr. Mofongo

In central Groningen, next to the University Museum, you’ll find a funky and unique bar and restaurant that is called Mr Mofongo. It’s not a regular bar, this place is combined from several parts of an old residential house. In just one place, you can enjoy a cafe, restaurant, wine bar, cocktail bar, and a distillery.

They make their own liquor, and something even more unique – The Robot arm that makes cocktails! Or, the robot that opens wine bottles and pours glasses of wine in the wine bar on the third floor. Mr. Mofongo has it all for a fun night out with friends or just a nice dinner. 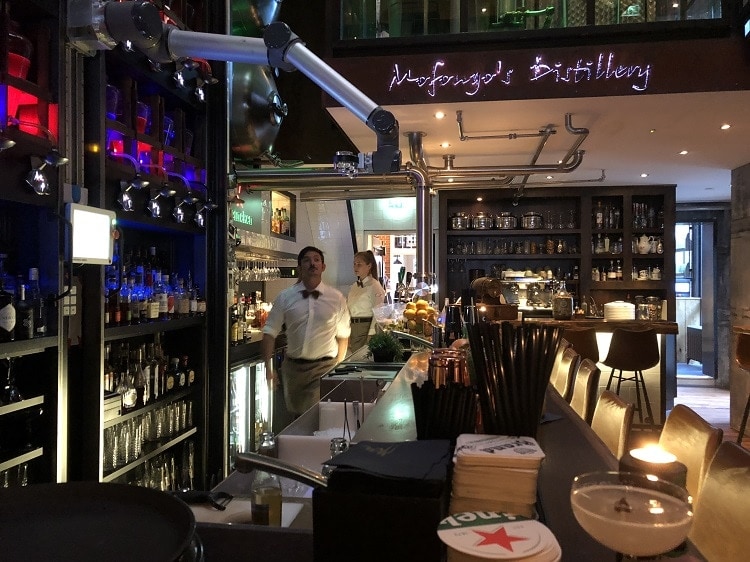 You might know about Ajax and PSV Eindhoven from the top league in the Netherlands. Groningen is the home city for the club – FC Groningen, so if you like football and your visit coincidence with a clash with Ajax or PSV, you should definitely go and watch some European top football

If you travel here during summer when Paradigm Festival is being held, you should definitely make a visit. It’s a music festival that reminds a bit of Tomorrowland but on a smaller scale.

It’s one of the highlights for the locals! And visitors from all over the world come here to experience the festival. 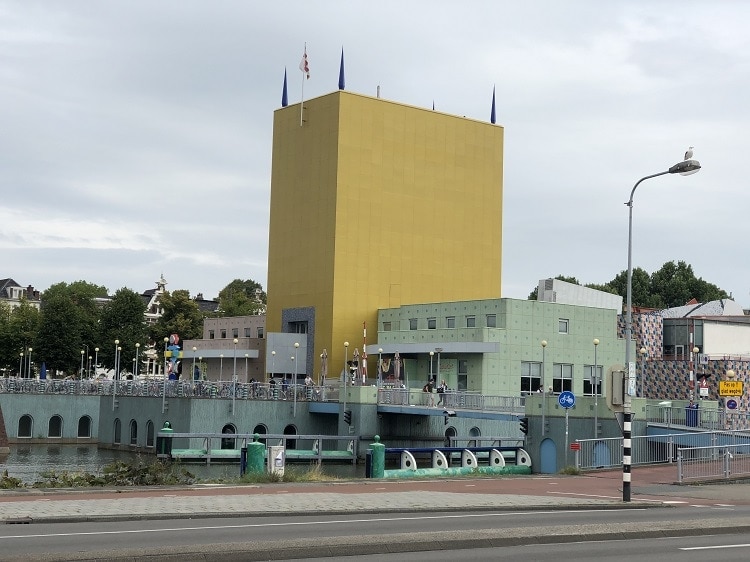 How to get around in Groningen

I recommend renting a bicycle to get around. It’s very convenient just as in the rest of the Netherlands, and it’s also the most common ways for locals to get around. There are lots of parking spaces for bicycles and it’s very safe for cyclists.

If you stay in the city center, you can walk to most attractions and places of interest.

There are buses who can take you around the city to different areas. It’s cheaper than a taxi and could be a good alternative if you want to explore beyond the city center, but don’t want to rent a bike. 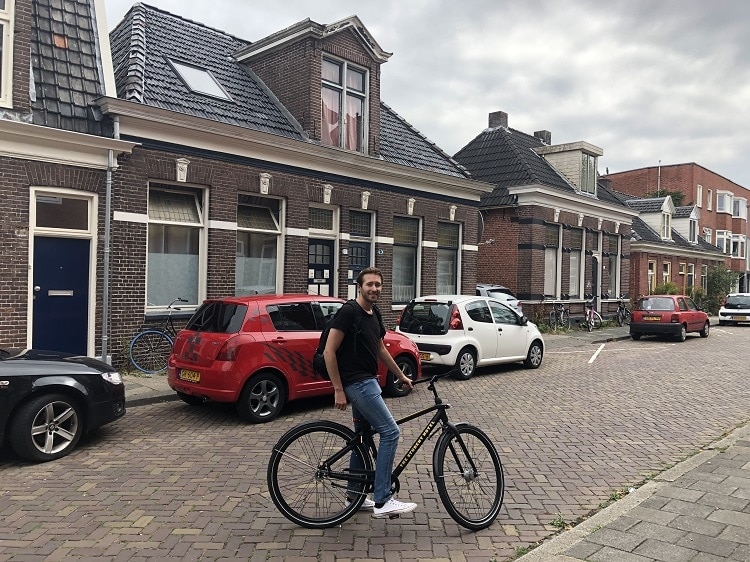 As of now, there are direct flights to Groningen from Copenhagen and London. But you can also get here quite easily by train from Schiphol in Amsterdam, which means that you can fly here from literally any destination around the world.

It’s the Nordica Air that flies between Groningen and Copenhagen.

If you’re traveling on a budget and want a nice place to stay, I can suggest The Student Hotel. I stayed here, and it’s not only good for students, but for all ages and visitors.

The staff is friendly and you can rent a bike here. The rooms are simple but have everything needed for a great weekend in Groningen.

Read more about the hotel 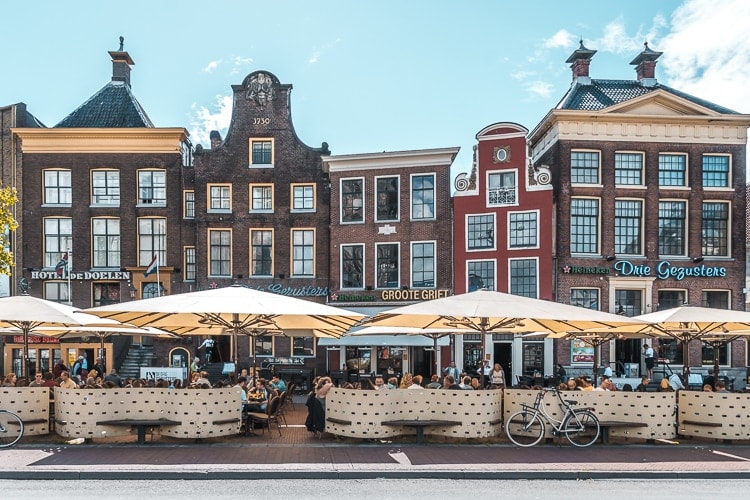 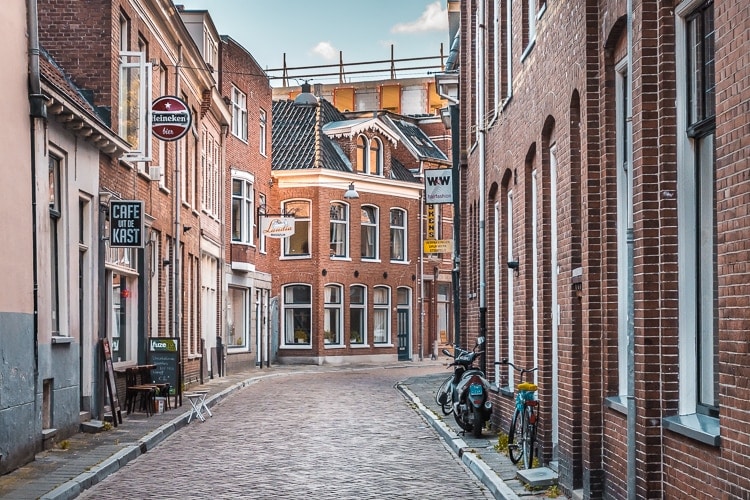 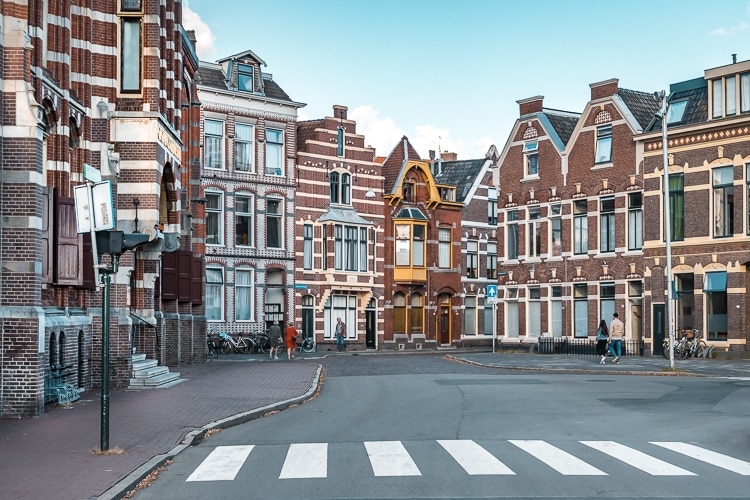 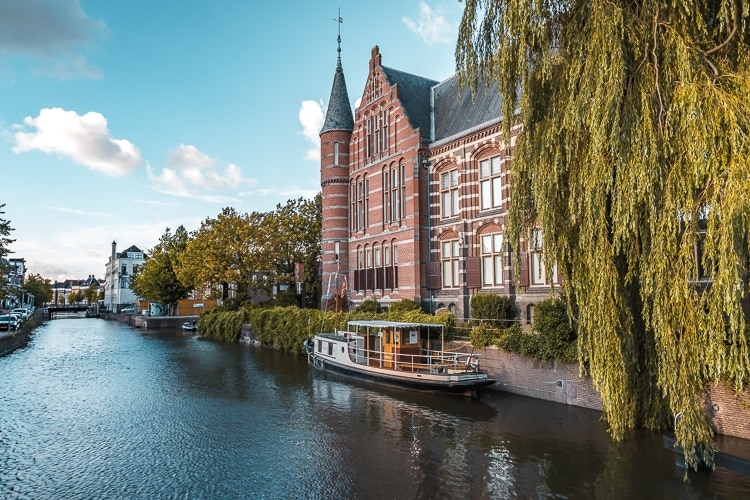 Groningen is the seventh largest city in the Netherlands with a well-known university, founded already in the 1600’s. There are around 200 000 people living here in total, whereas at least 40 000 of them are students. Of these students, about 11% are from foreign countries.

The city is known for being innovative and having a great startup-scene. There’s a lot going on in Groningen, and the city is continuously working on improving it via various projects, especially when it comes to being sustainable and innovative.

Despite being a quite small city, both in size and total population, you’ll find everything needed here, both as a tourist and local.

The history of Groningen

Historically, the city has been important, and it’s currently unknown when it was first founded. However, the first document mentioning the city is dated to 1040.

In the 13th century, Groningen became an important trade center, and it was also then when the first city wall was being built to protect from intruders.

The greatest period was in the 15th century when Friesland was ruled from here as well. Martinitoren was built during this period. 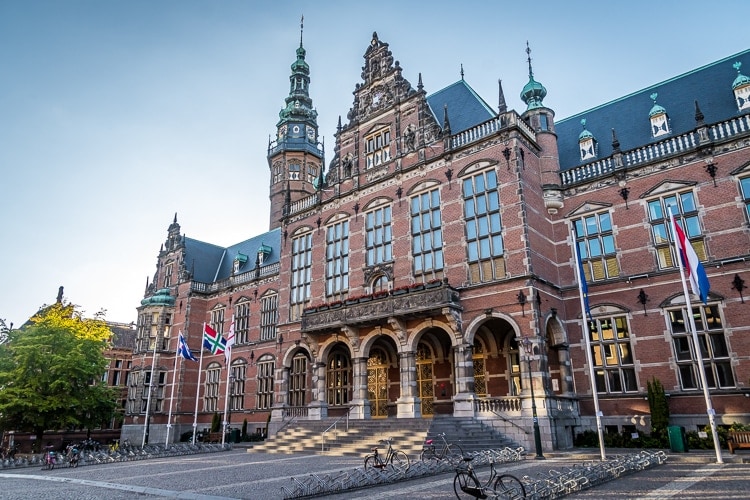 Groningen is situated in Northern Netherlands, in the province of Groningen.

Climate and Weather in Groningen

The weather is pretty similar to the rest of the Netherlands, but during the winter months, it can be a bit colder here due to winds. Dress as you would if you travel to Amsterdam, and bring an umbrella if you have because you never know in the Netherlands!

Below you can see the average temperature for Groningen.

Northern Netherlands is beautiful but easily fall into the shadow in favor of Amsterdam, Rotterdam, and Haag, which is visited by millions of tourists each year.

However, if you spend a few days in the city, you could also make some day trips from Groningen to these places.

Giethoorn is a typical Dutch village. And if you come to Northern Netherlands during summer, you should check out Ameland Island and Scheveningen Beach for sunbathing. 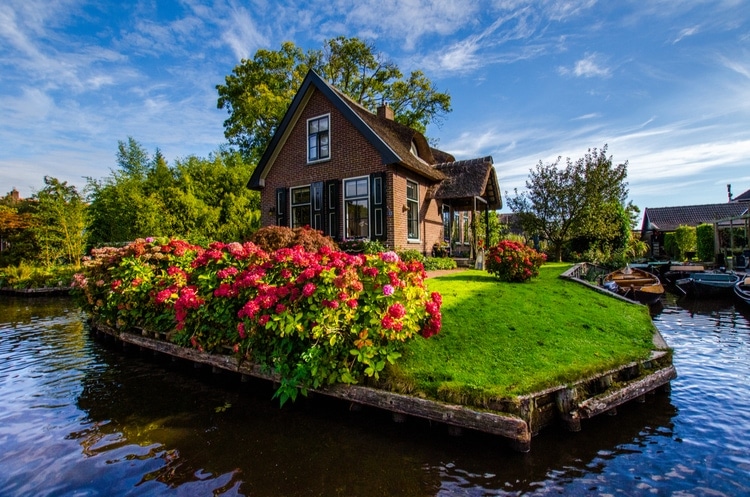 More reading from the Netherlands

Do you have more questions about Groningen? Leave a comment below or send an email! 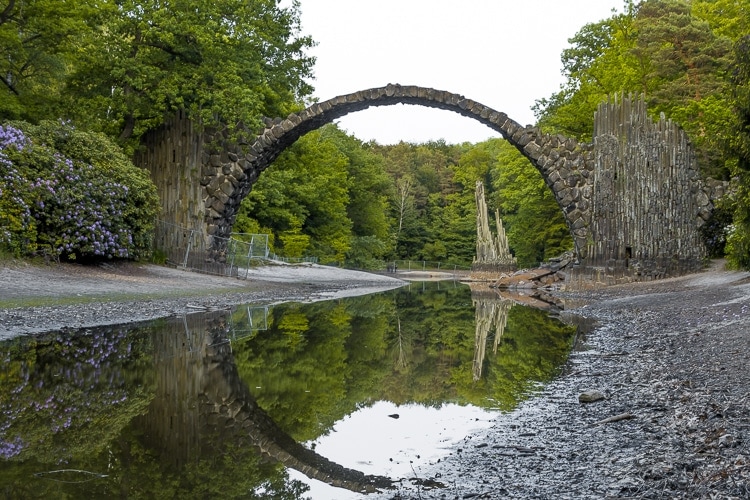 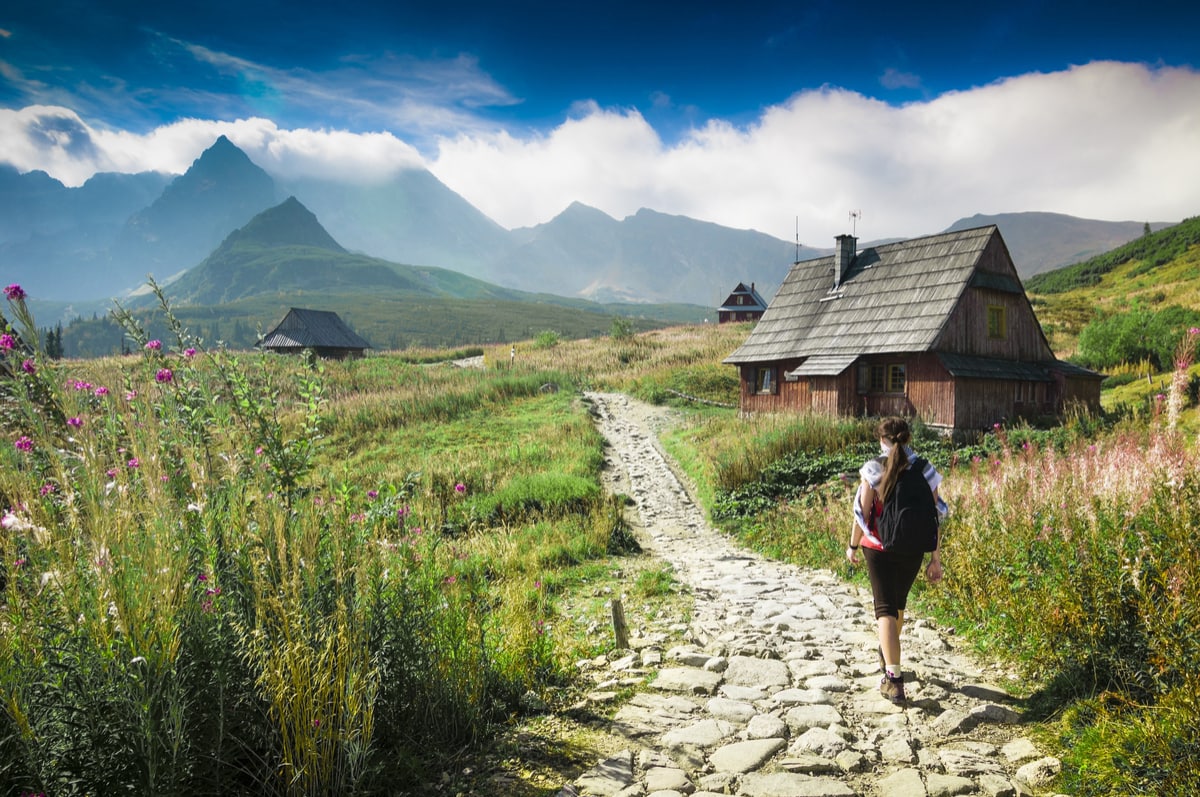 You seem to have missed VERA, since the mid Seventies one of the main underground rock clubs of the Netherlands. Despite the relatively small room (I think their main stage has space for about 500 attendees), over the years, VERA hosted bands like U2, Simple Minds, Joy Division, Nick Cave, Sonic Youth, Nirvana, Pearl Jam, Franz Ferdinand, Elbow and a myriad of other big names. Every week the club has about two concert nights at the main stage, but VERA also has a small bar with live music in the cellar of the building and has a weekly cinema night. You'll find VERA in Oosterstraat 44, a few hundred meters from Grote Markt. www.vera-groningen.nl

Haven't heard of it :) But thank you for sharing. Great recommendation!