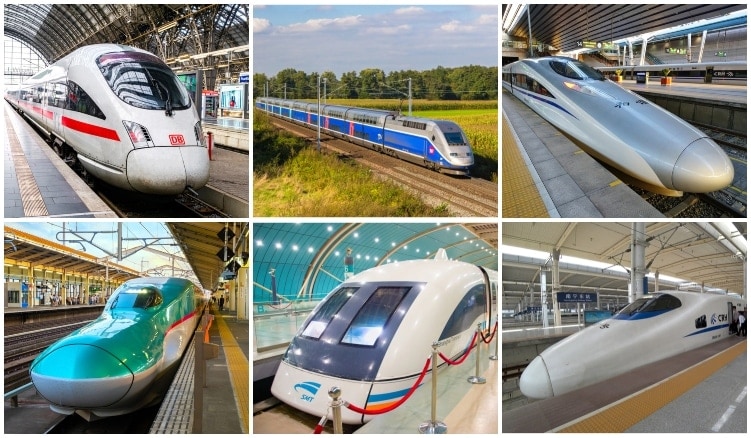 Want to know which is the fastest train in the world? Here’s an updated list with the world’s fastest trains ranked by their top speed in miles per hour (km/h).

The technology is known as Maglev, which is short for magnetic levitation, and it’s revolutionary within the train world. The Shanghai Maglev has an impressive acceleration as well that allows the train to reach 267.8 mph in just 4 minutes.

It has been running commercially between Shanghai Pudong International Airport and Longyang Road Station since 2004. 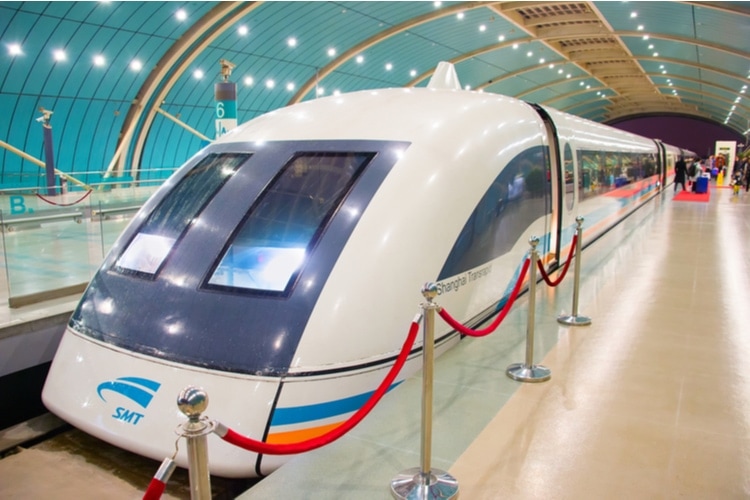 The second fastest train in the world is also operating in China, and it’s known as Fuxing Hao CR400AF. It’s a non-maglev train that allows passengers to travel between Beijing South and Shanghai Hongqiao station in less than 5 hours.

With a maximum speed of 249 mph, it beats the previous record of CRH380, which is another high-speed train in China with a top speed of 236 mph. 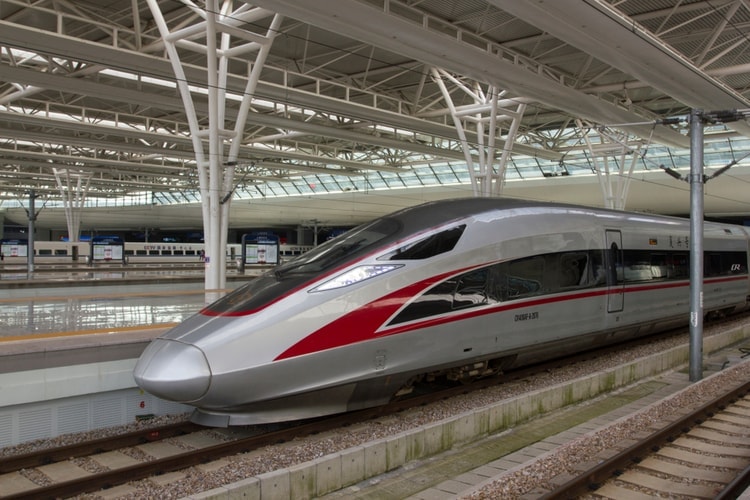 Even the third fastest train in the world is operating in China, and it has a max speed of 236 mph (379 km/h). The train is nicknamed “Harmony” and the model’s name is CRH380A.

It currently connects cities such as Shanghai with Nanjing and Hangzhou as well as Guangzhou with Wuhan. 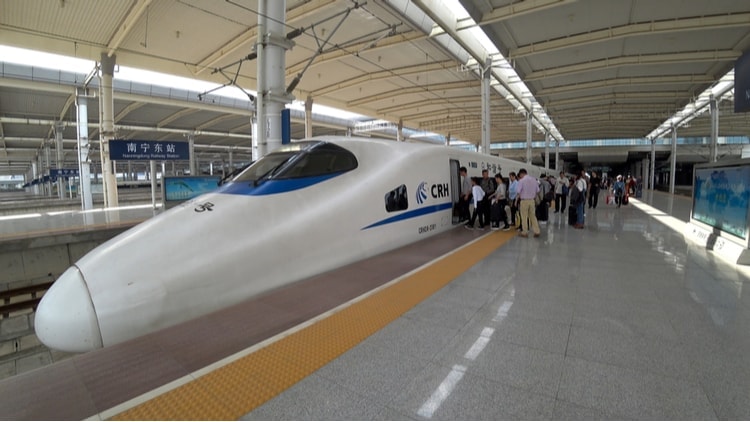 The AGV Italo and Frecciarossa are the current two fastest trains in Europe where both types of trains can reach top speeds of 220 mph (354 km/h). They connect the largest cities in Italy and allows passengers to travel from Milano to Rome in just 3 hours. Below is a photo of the ETR 500 Freccariossa and Freccariossa 1000, which is the fastest train in Italy together with the AGV Italo. The Freccariossa 1000 is designed to reach speeds of 400 km/h, but the current operating speed is set to 300 km/h. 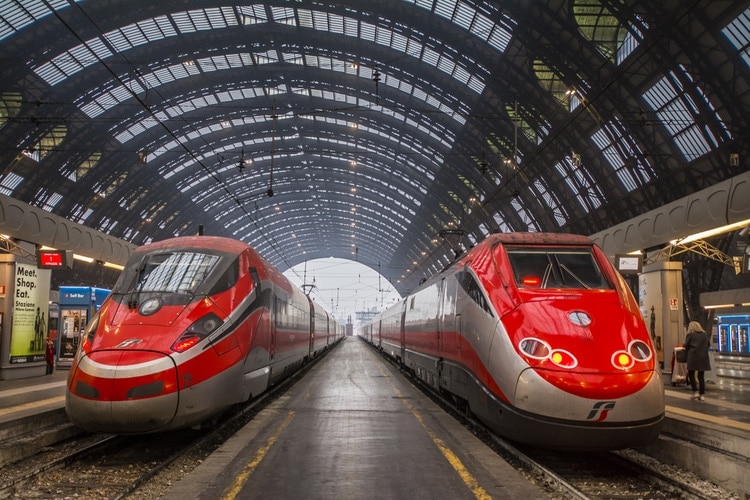 The Velaro E train is developed by Siemens and is another European high-speed train. There are several Velaro trains that are operating in European countries with various speeds.

The Velaro E was specifically made for Spain and the State-owned company Renfe, and currently allows passengers to travel between Barcelona and Madrid in just 2.5 hours. Talgo 350 is another high-speed train in Spain that has the same max speed as Velaro E at 350 km/h. It has a unique aerodynamic design which is optimized to handle pressure waves at high speeds.

The Talgo 350 is also known as RENFE AVE Class 102 or by its nickname “Pato” which is the Spanish word for duck. It has been in operation since 2005 and currently connects Madrid and Barcelona. 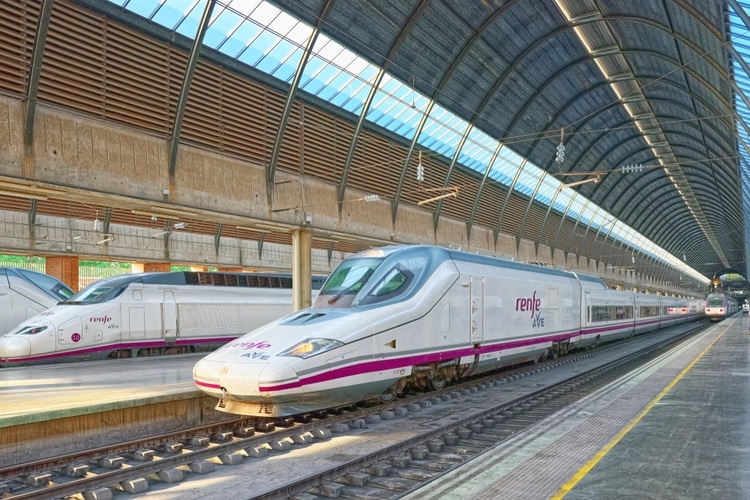 Korail SRT is the successor of the KTX and has a maximum speed of 205 mph or 330 km/h, which makes it one of the fastest trains in the world, and the fastest in South Korea. 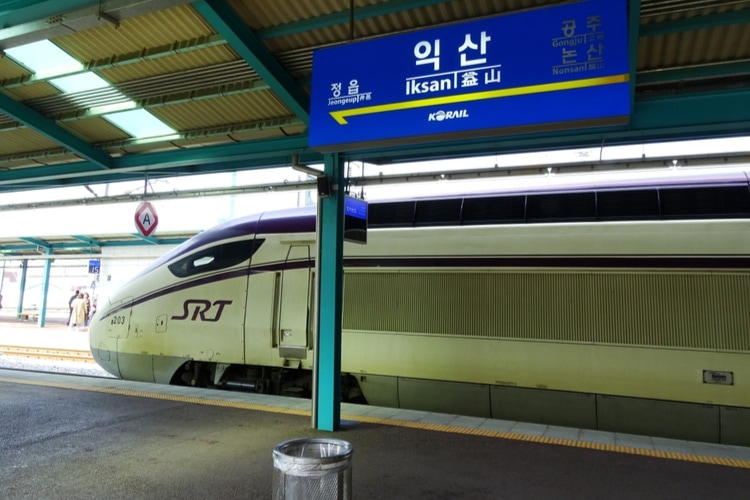 Japan introduced the first Shinkansen train in 1964, and since then the country has been world-leading in development of high-speed trains and railways.

The Hayabusa E5 series is the current fastest train in Japan with a maximum speed of 200 mph (321 km/h), which is about 20 mph faster than the Shinkansen Nozomi.

There aren’t many countries in the world that can compete with the ease of traveling by train in Japan, and almost the whole country is connected by train. The Japanese government is currently developing and upgrading high-speed rails which will allow faster trains and speeds in the future. 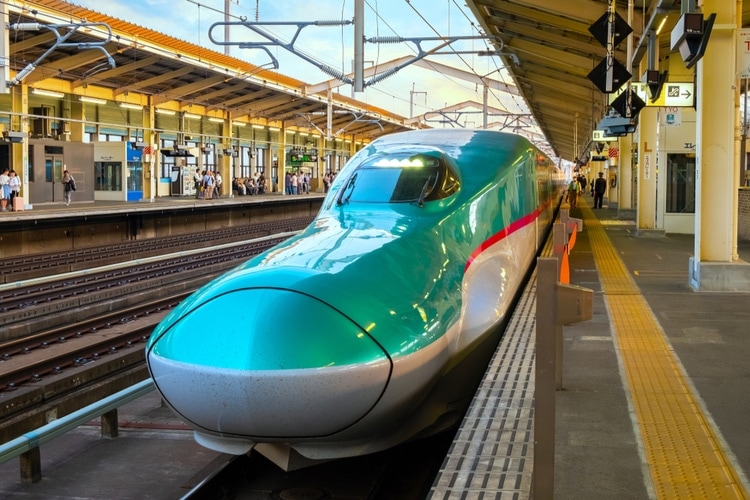 The Europduplex is another European high-speed train, which is operated by the French railway company SNCF. The Alstom Europduplex has a top speed of 198.8 mph (320 km/h) and connects railway networks in France, Switzerland, Germany, and Luxembourg.

It’s a double-decker with 1020 seats in total, and relatively low power consumption compared to other trains. 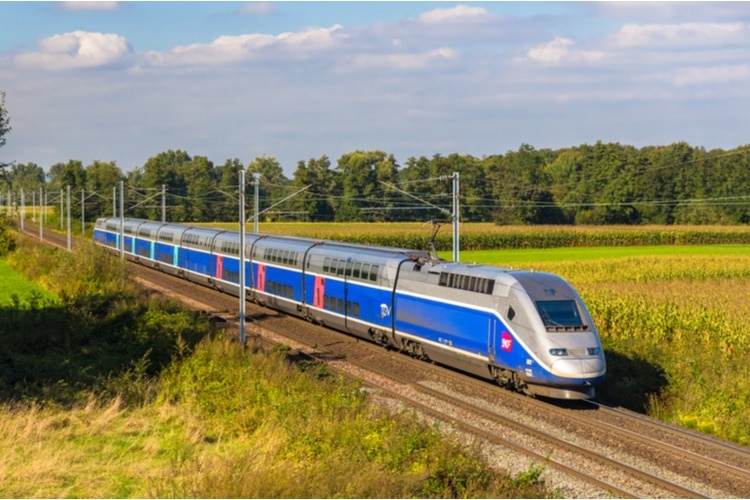 The THSR 700T is currently the fastest train in Taiwan, and one of the fastest in Asia with a top speed of 186.4 mph (300 km/h). It operates between Taipei City and Kaohsiung and connects the two cities in just 90 minutes. 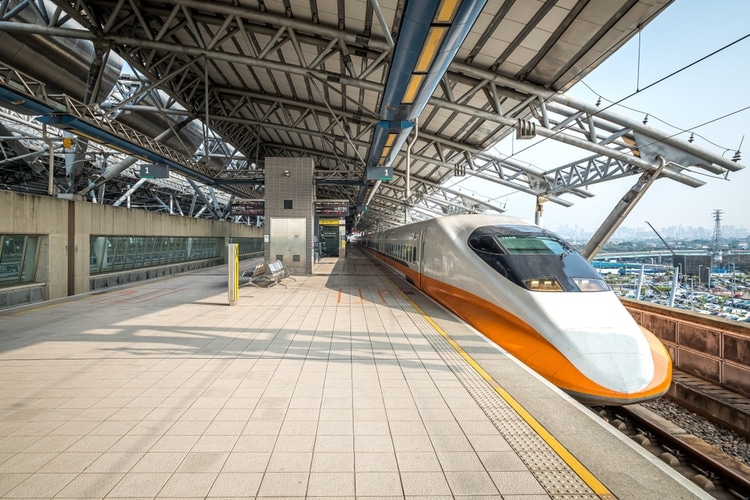 More about the Fastest Train in the World

High-speed trains have been around for a while now, and some countries have adopted these technologies and trains to make transportation within the country swifter and more accessible.

I remember when I was just a little kid in the early 90s and traveled from my hometown Helsingborg to Stockholm in Sweden. When they introduced the X 2000 train, it was revolutionary and allowed us to reach the Swedish capital in just 4 hours instead of 6-7 hours. 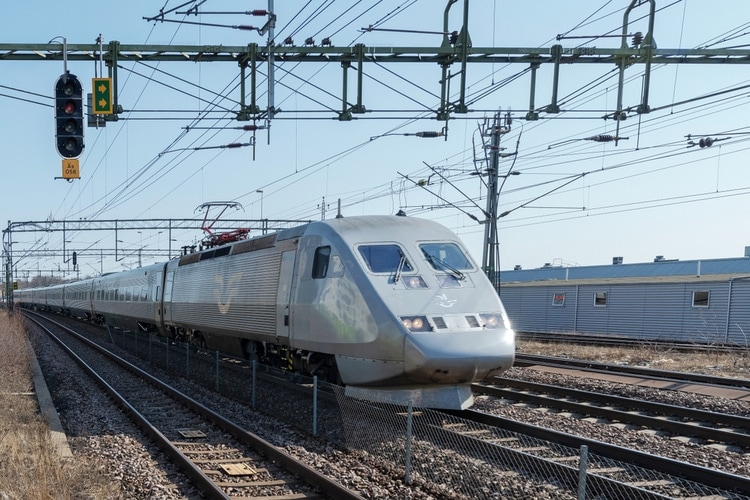 The X 2000 is still operating in Sweden with top speeds of 210 km/h (130 mph), but much has happened since, and I think that the future for the fastest trains in the world looks very bright. New technologies are developing and more countries are adopting high-speed trains.

Newer high-speed trains are also more environmentally friendly compared to airplanes and can reduce carbon footprints without adding much travel time from door to door.

In Japan, there are plans to introduce a new type of maglev train which will allow passengers to travel from Tokyo to Nagoya in just 40 minutes. For those of you who aren’t familiar with Japanese geography, that’s a distance of 358 km (222 miles) by car.

The Chūō Shinkansen will have a maximum speed of 505 km/h (315 mph), which will probably make it the fastest train in the world by 2027 unless a faster train is introduced and operating somewhere else by then. 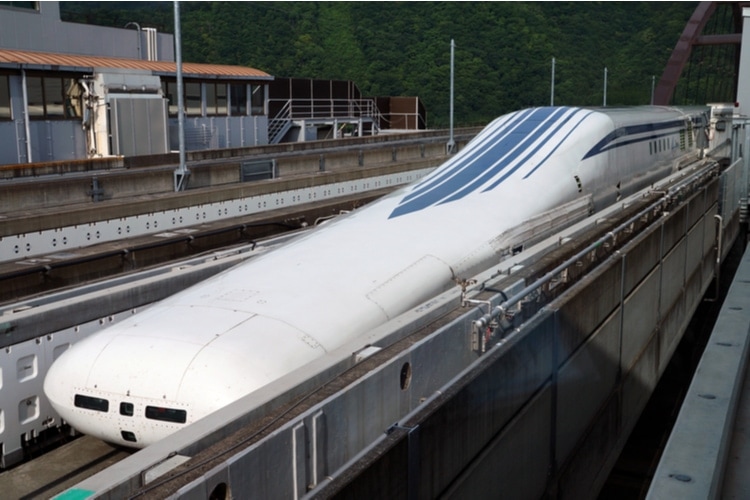 What is the fastest train in the USA?

The U.S is lagging behind quite a bit when it comes to high-speed trains, and the fastest train in the USA is currently the Acela Express, which can reach a max speed of 150 mph. 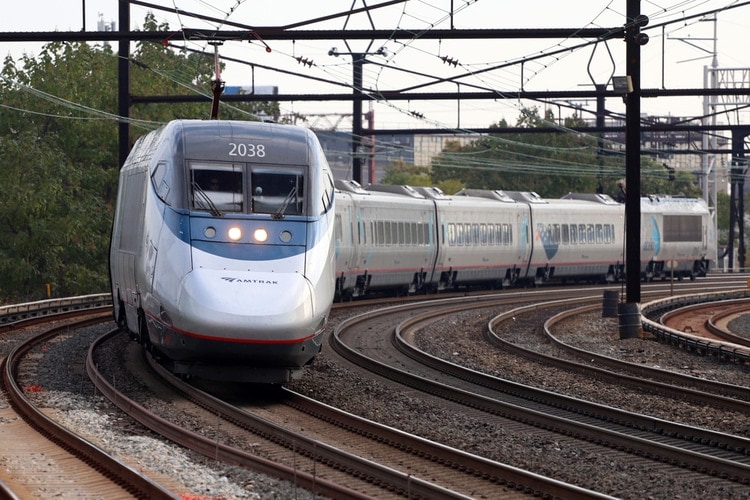 What is the speed of the fastest train in the world?

The current top speed of the fastest train in the world is held by Shanghai Maglev at 267.8 mph (430 km/h).

What country has the fastest train in the world?

China has the fastest train in the world, which runs between Shanghai Pudong International Airport and Longyang Road. 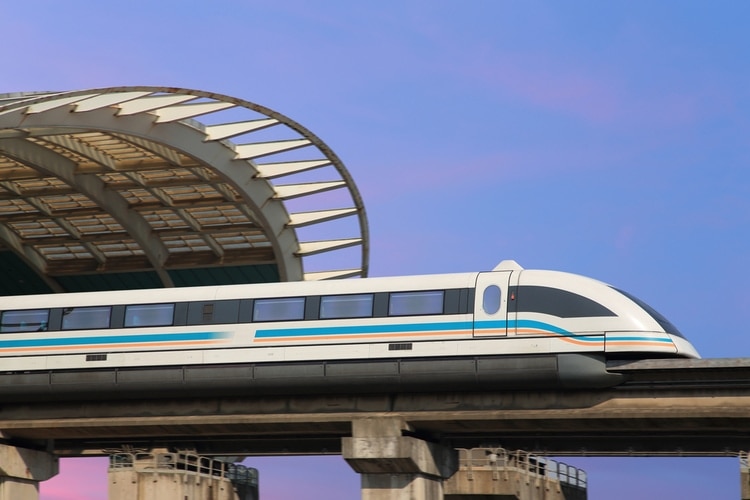 Which countries have high-speed trains?

What country had the first high-speed train?

Japan launched the first high-speed train in the world in 1964, also known as the Shinkansen bullet train, which started its operations between Tokyo and Osaka. 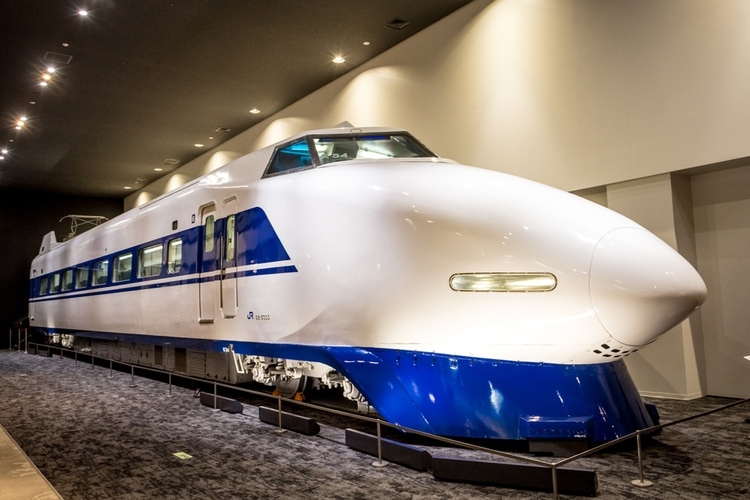 Would you like to go for a ride on the fastest train in the world? Leave a comment below! 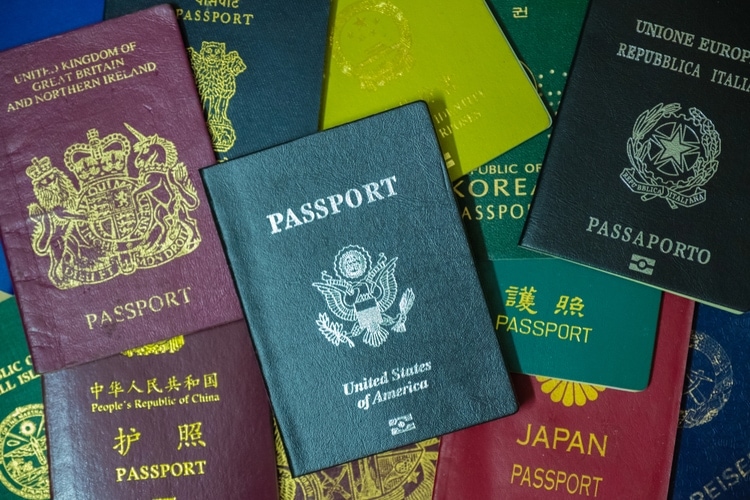 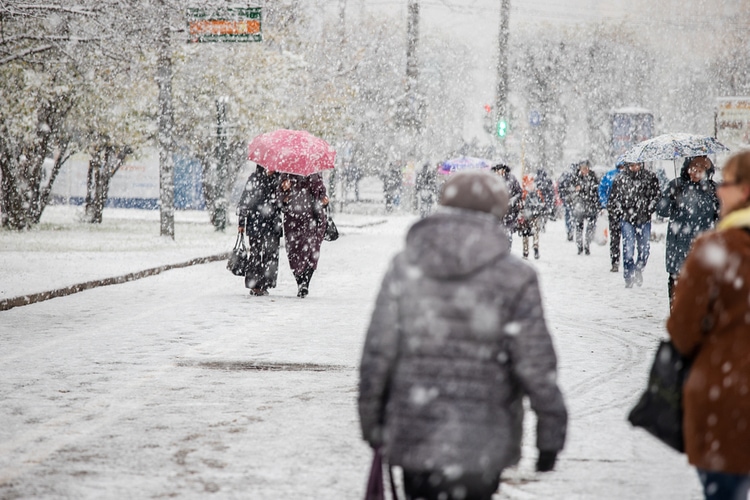