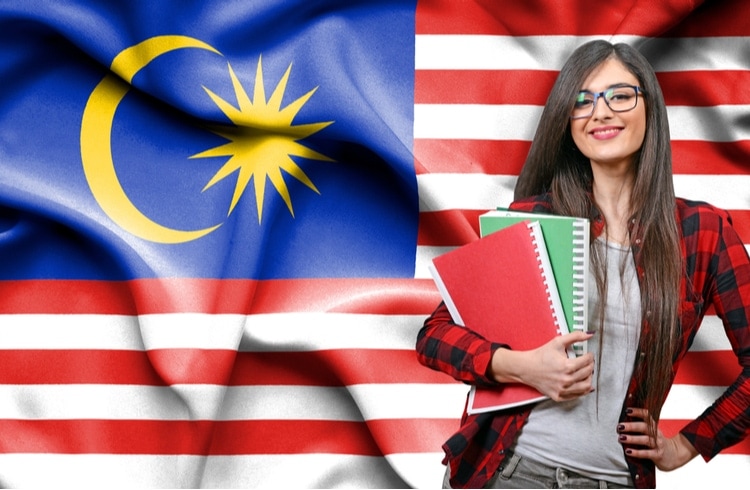 Want to know more about Malaysia? Here are 25 Interesting Facts about Malaysia that you probably didn’t know before reading this!

To make this even more fun, I want to challenge you as well. How many of these Malaysia facts did you know before reading this? Share your result in the comment section!

Nasi Lemak is the national dish of Malaysia

Nasi Lemak is a fragrant rice dish from the Malay cuisine, which is considered to be Malaysia’s national dish. It’s eaten all over the country, and it’s a real classic which is cooked in coconut milk and pandan leaf. 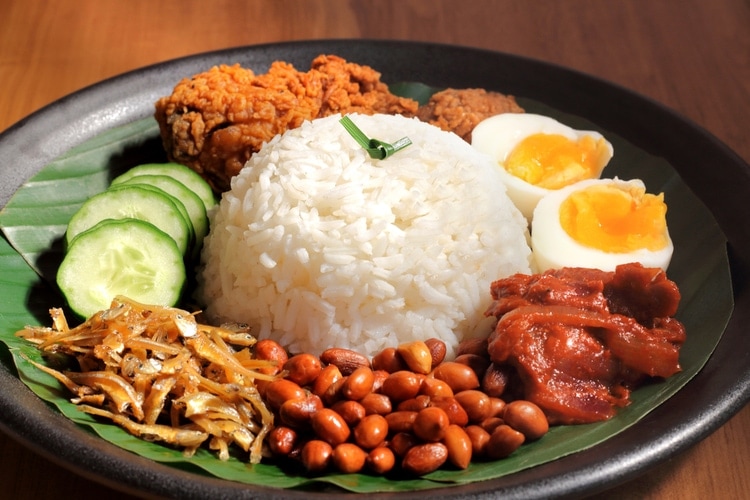 It’s one of the most diverse countries in the world

There are several ethnic groups that are living in Malaysia, where Malay is the largest ethnic group. The Malay people are included in what is known as Bumiputera, which is a status given to certain non-Malay indigenous peoples as well as Malay.

In addition to Bumiputera, there are also some 23% ethnic Chinese and 7% Indians that make up the total population.

Malaysia’s most famous plant is the rafflesia flower

It’s not only human culture and ancestry which is diverse here, but the Malaysian forests are also home to some very interesting animals and plants. One such example is the Rafflesia flower, which is the largest flower in the world.

The Rafflesia flower is known for its stench which is similar to rotting meat when it’s in bloom. It can be found primarily in the Gunung Gading National Park on the island of Borneo. 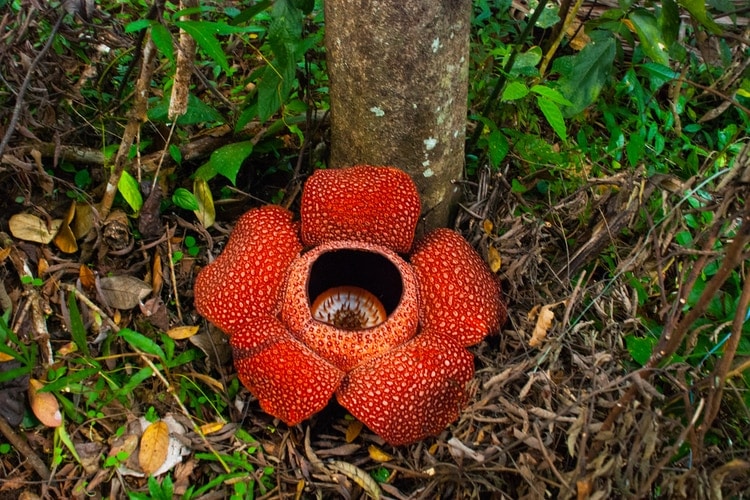 It became independent in 1957

Malaysia has been inhabited by modern humans for at least 40 000 years, and during that period various civilizations have ruled the Malaysian lands. The Negritos are thought to be the first inhabitants in the Malay Peninsula, and later traders from China and India arrived in the first century AD.

In the early 1500s, the Portuguese conquered Malacca, and in mid-1600s the Dutch came and took over power from the Portuguese. The British Empire was the latest colonial power to establish here in the late 18th century.

In the 19th century, the British controlled large parts of the country and established a colony. It wasn’t until 1957 when Malaysia finally got its independence after several hundred years of European colonialism.

There are several venomous snakes in Malaysia

The cobra, the pit viper, and the sea snake are three venomous types of Malaysian snakes, and although tourists are unlikely to see any venomous snake, it’s definitely one of the many interesting facts about Malaysia.

The Malayan Cobra is primarily found in Peninsular Malaysia, and Penang, Kedah, and Perlis are the main areas where the Malayan Pit viper is found. 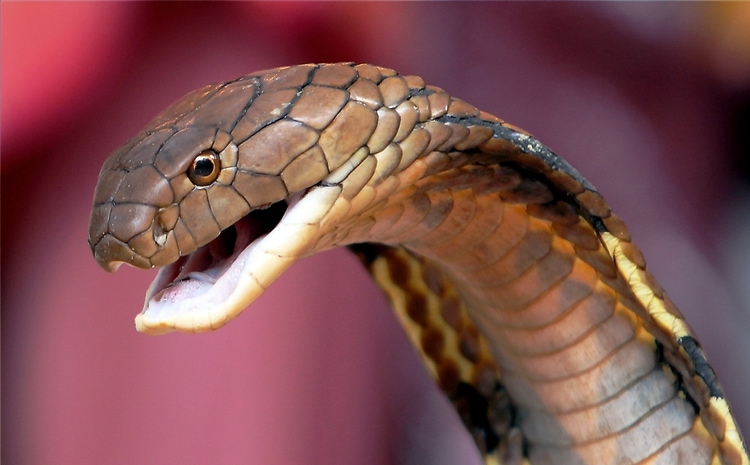 The smelliest fruit in the world grows here

Durian is known as the world’s smelliest fruit, and when ripe, you can feel the smell from several hundred meters away. It’s a fruit that is native to Malaysia, and there are many Malaysian varieties of Durian fruit.

It’s a local classic, and when in season, you’ll find it everywhere in the local markets. 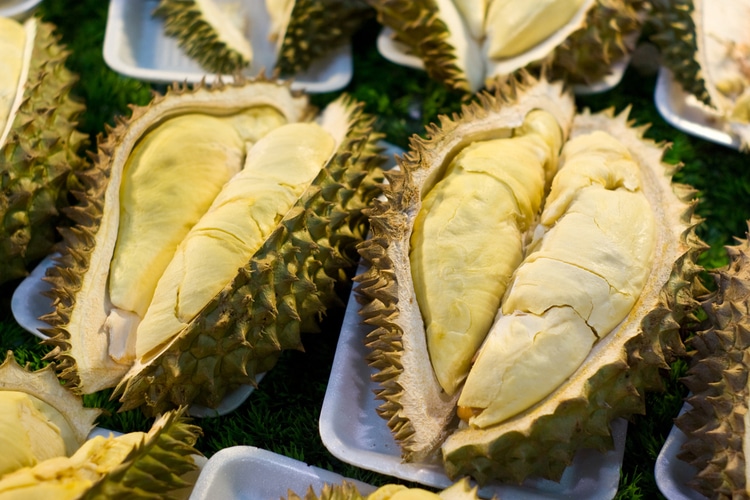 The agriculture sector accounts for about 12% of Malaysia’s total GDP. Rubber, palm oil, and cocoa are all crops that the British introduced in the 19th and 20th centuries, and they account for the majority of agricultural exports.

There are four UNESCO World Heritage Sites in Malaysia 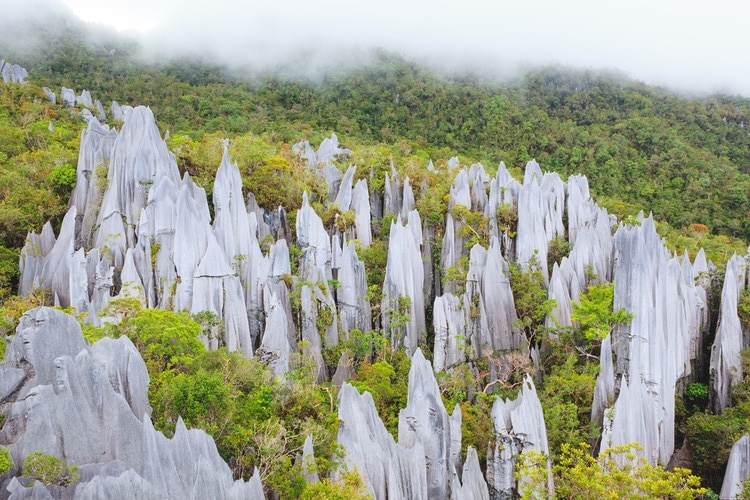 Malaysia has some of the strictest drug laws in the world

Home to the Orangutan

Some 26% of Borneo belongs to Malaysia, which includes Sabah, Sarawak, and Labuan. Danum Valley is one of the best places to see wild orangutans. In addition to wild orangutans, there are also rescue and rehabilitation centers that you can visit. 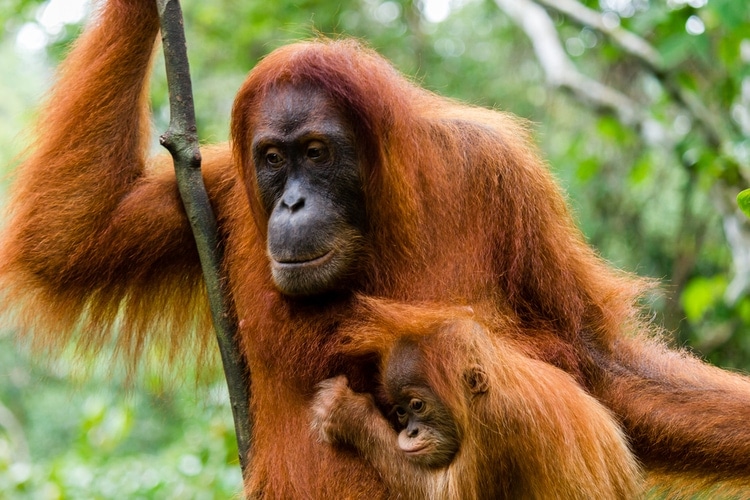 Malaysia’s highway is longer than the circumference of Earth

The Malaysian highway stretches for some 65,877 km (40,934 miles) across the country and connects the major cities. The length is actually longer than the Earth’s circumference, which is definitely an interesting fact about Malaysia.

It’s one of the most developed countries in Southeast Asia. 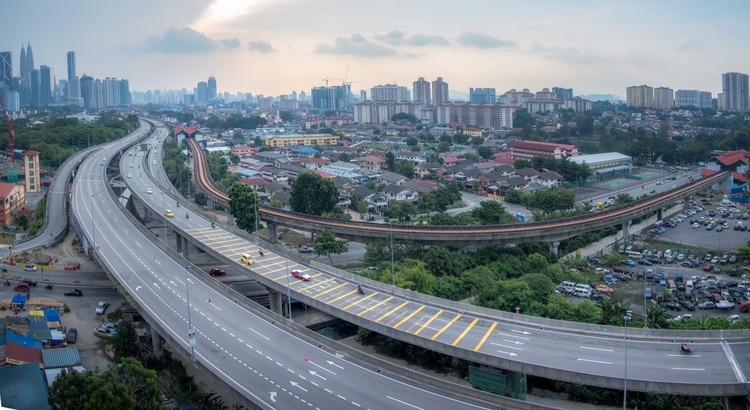 Islam is the official religion

Some 61,3% of the population is Muslim, and Islam is the official religion. Buddhism, Christianity, and Hinduism are the three other most common religions. The Malay people are Muslims, and make up the majority of Malaysia’s Muslim population.

Mosques are found in every city, but there are also Buddhist temples and churches. The country has become quite famous for being one of the few countries where several faiths live in peace and harmony.

There are nine royal families in Malaysia

Malaysia has a unique system where a king is elected every five years from one of the nine royal families. 9 of the 13 states of Malaysia are constitutionally headed by traditional Malay rulers.

You must be a Malay Muslim of royal descent to be eligible for the throne. 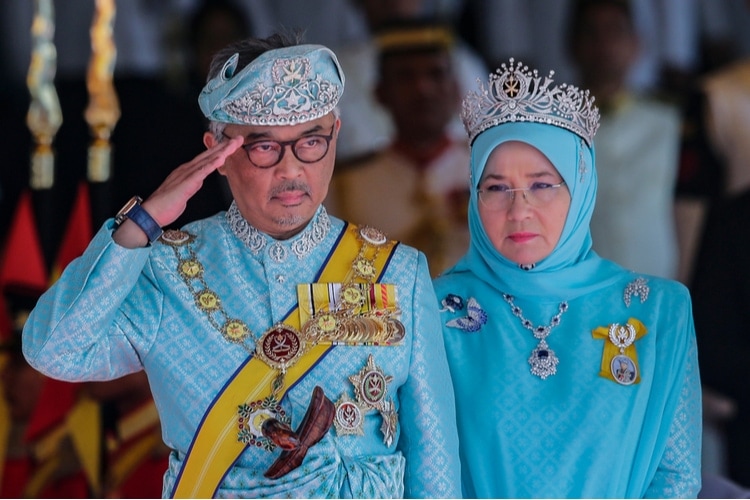 Some Malaysian buildings don’t have a fourth floor

If you enter an elevator in one of these buildings, you will notice that there is no fourth floor, and that it’s labeled as 3A instead. This is because four has a similar tone to the Chinese character for “death”.

This is a Malaysian Chinese superstition, and in neighborhoods with ethnic Chinese, the house numbers 44 and 4 might also be replaced with a different number.

The Petronas Twin Towers stands tall in the Malaysian capital

The Petronas Twin Towers is one of the most famous buildings in the world, and it was actually the tallest building in the world for some time after its completion.

There are 88-stories in total, and the towers reach a height of 451.9 meters in the Malaysian capital, Kuala Lumpur. 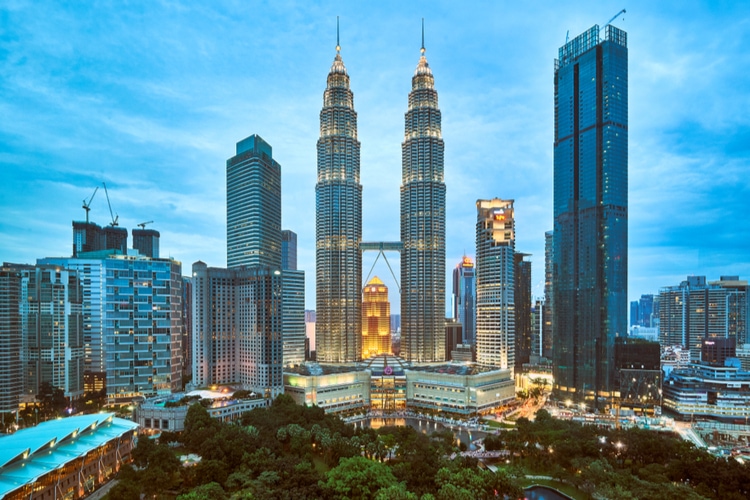 Below is some general info such as total population, land area, biggest lake, highest mountain and other general facts about Malaysia that might be interesting to know.

The Biggest Cities in Malaysia

If you’re looking for facts about Malaysia, it might also be interesting to know which are the biggest cities. Here’s a list of the top 10 biggest cities ranked after population.

The Malaysian flag is also known as Jalur Gemilang, which means stripes of glory. It has 14 red and white stripes as well as a blue canton with a 14-point star and crescent. The flag was designed by an architect named Mohamed Hamzah. 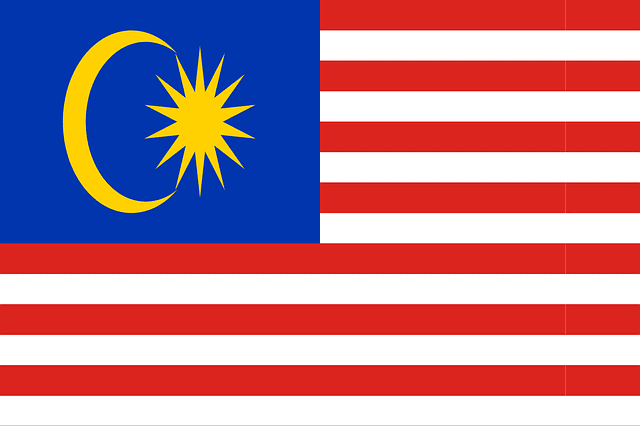 Below, you can see the country’s territory marked in yellow. Malaysia is divided into a West and East territory with borders to Thailand, Indonesia, and Brunei. 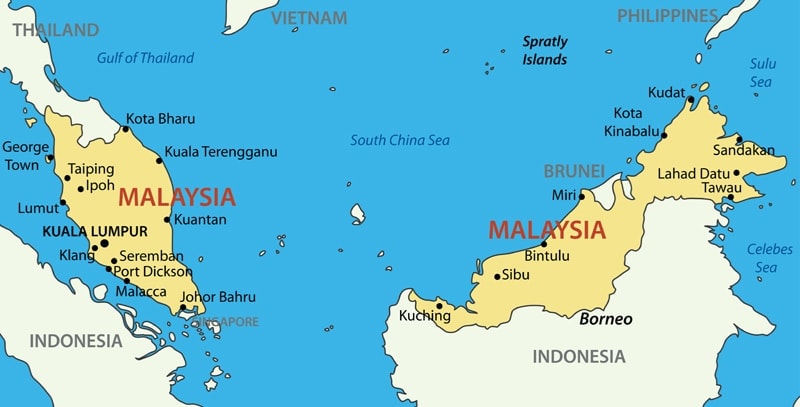 How many of these Malaysia facts did you know beforehand? Share your result in the comment section below! 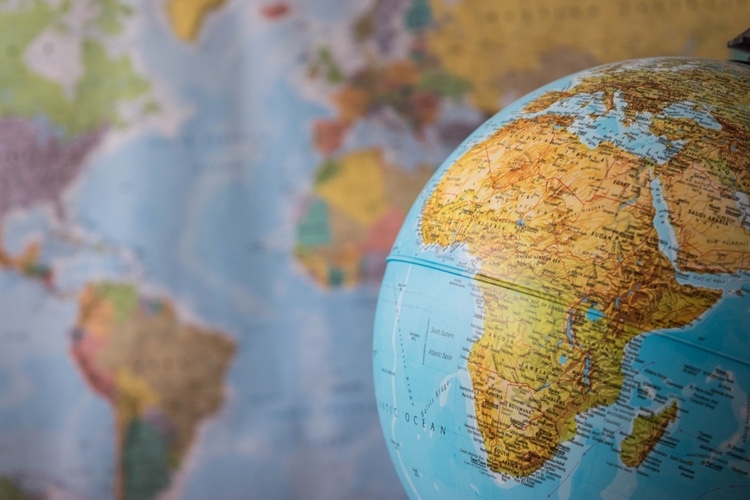 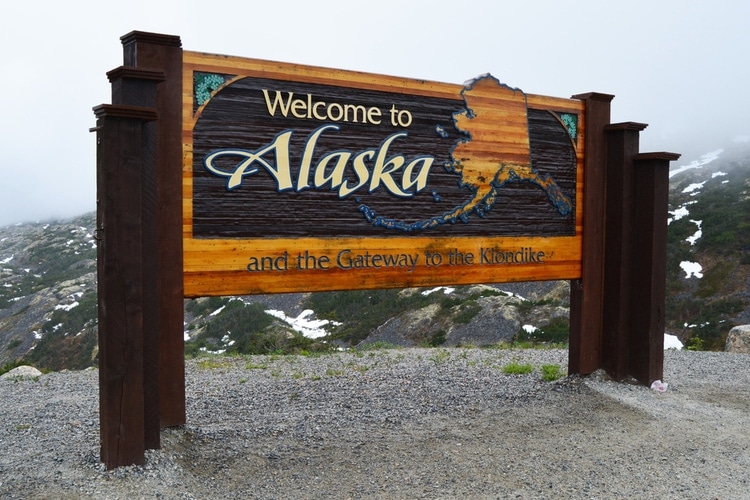