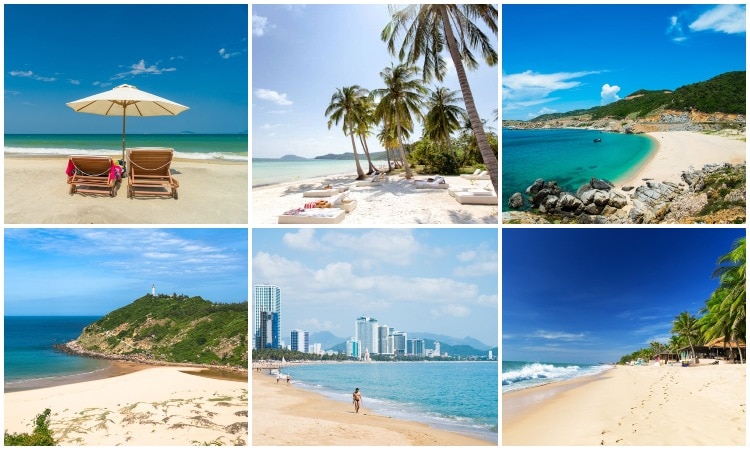 Are you looking for the best Vietnam Beaches? Here’s my 2019 guide which lists all the best beaches in Vietnam plus how to get there.

For years, Thailand has been famous for having the best beaches in Southeast Asia, but there are many hidden gems in Vietnam as well.

And while Phu Quoc has become the frontier of beach holidays in Vietnam, there are actually several destinations along the coast that is home to some of the most beautiful beaches in Vietnam.

Let’s start with one of the most famous beaches in Vietnam, Bai Sao, also known as Sao Beach. It’s located in the southern part of Phu Quoc and became known for being a pristine and undeveloped paradise beach in Vietnam.

That lasted for some time, but development has caught up and while it’s still a beautiful beach worth a visit, that’s good to know as you might have heard about it as being undeveloped and secluded.

It’s still one of the best beaches in Vietnam without a doubt, just be prepared for other tourists going there as well and street vendors. 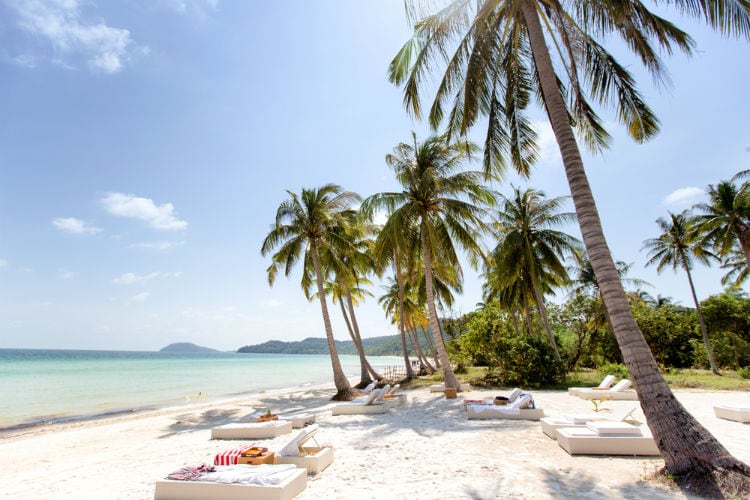 Of all the city beaches in Vietnam, Nha Trang is probably the best. It almost reminds a bit of the Copacabana in Rio with its skyscrapers and mountains in the background. 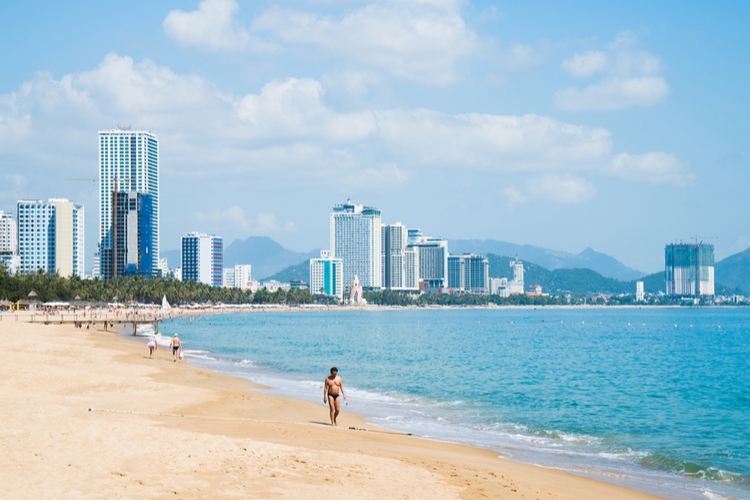 If you’re looking for a nice island getaway in Vietnam, look no further than Hon Tre Island, which is located just outside Nha Trang. You can easily go here with a boat, but you can also stay overnight at the luxurious Vinpearl resort. 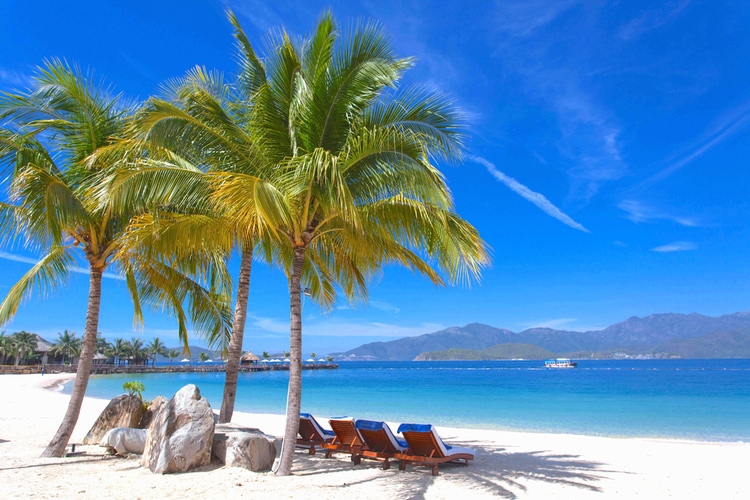 This is another beautiful beach in Vietnam which isn’t far from Nha Trang. Doc Let Beach is located about 1 hour north by car from the city, which makes it a great day trip. Visitors can also stay in nearby hotels, such as Doc Let Beach Resort. 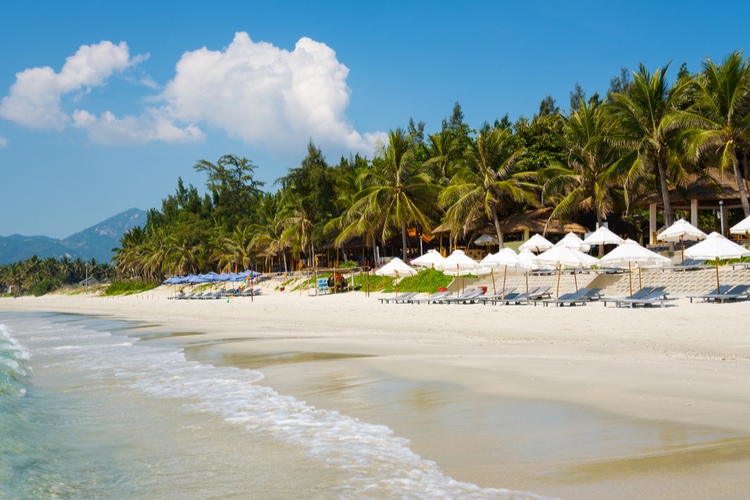 Lang Co beach is situated between Danang and the imperial city of Hue in the central parts of the country’s coast. It offers a nice secluded beach away from the crowds 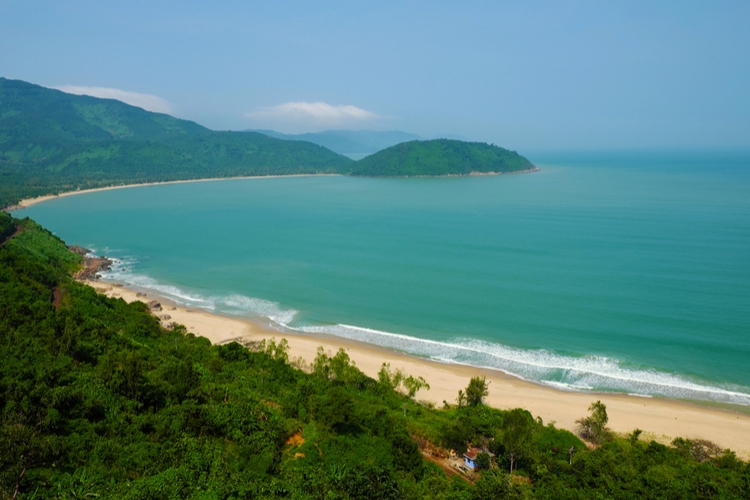 Mui Ne is a paradise for those who love a day full of adventure and adrenaline. It’s famous for its kitesurfing and wakeboarding as well as paddleboarding. If you get tired of the beach, you can also go sandboarding in the “desert” of the dunes of Mui Ne. 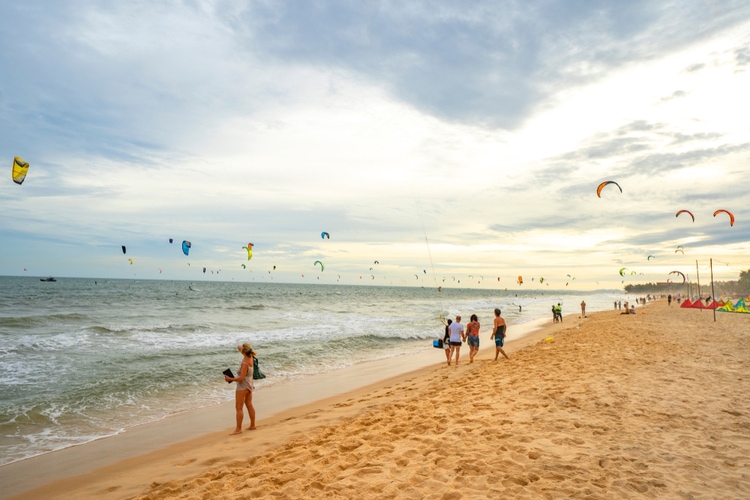 If you’re looking for an organized beach, yet away from the hustle and bustle at more popular tourist spots in Vietnam, this is a great place to do so. Phan Rang Beach can be found in the Ninh Thuan Province and offers everything needed for a lovely holiday. 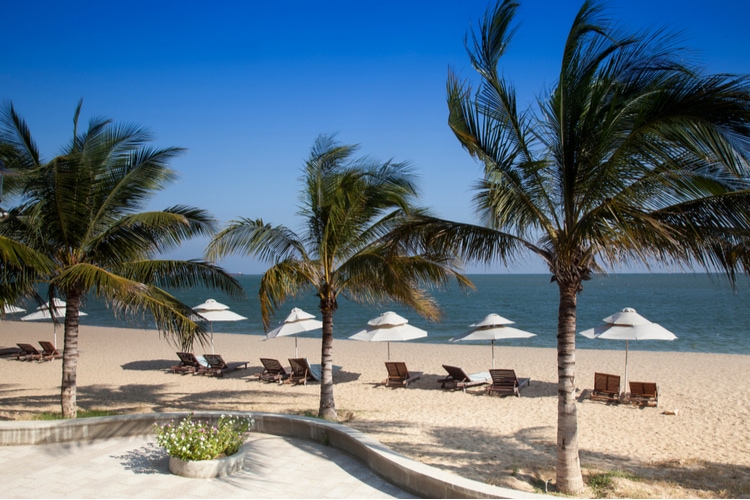 If you want to travel even further away from the crowds, you can go to Dai Lanh Beach, which is located about 1 hour north from Doc Let Beach. It’s a lovely little beach that is framed by lush mountains that offers white sandy beach and azure blue waters.

Few tourists make their way here, but if you do, you’ll be rewarded. Not only with the beach itself but also by getting an authentic Vietnamese experience, off-the-beaten-path. 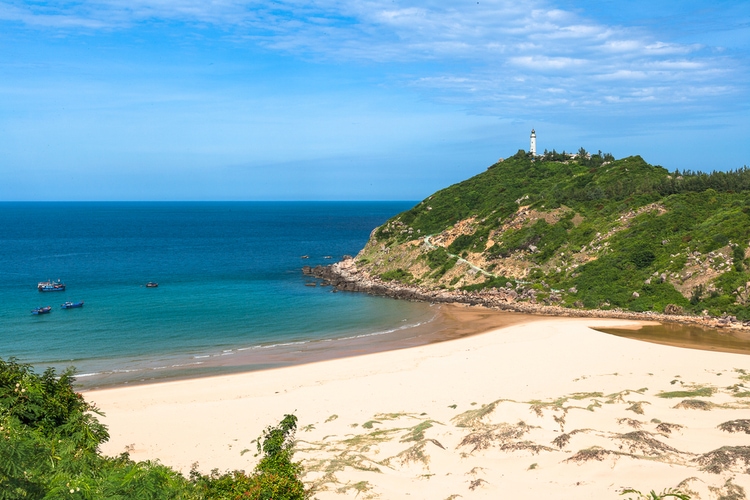 Danang has come along since the Vietnam War, and today it’s famous for its sandy beach with soft white sand that stretches several kilometers.

My Khe is one of the best sections on the beach in Danang, and no matter if you just want to relax or try some watersports, there is something at the beaches of Danang that will suit your wishes. 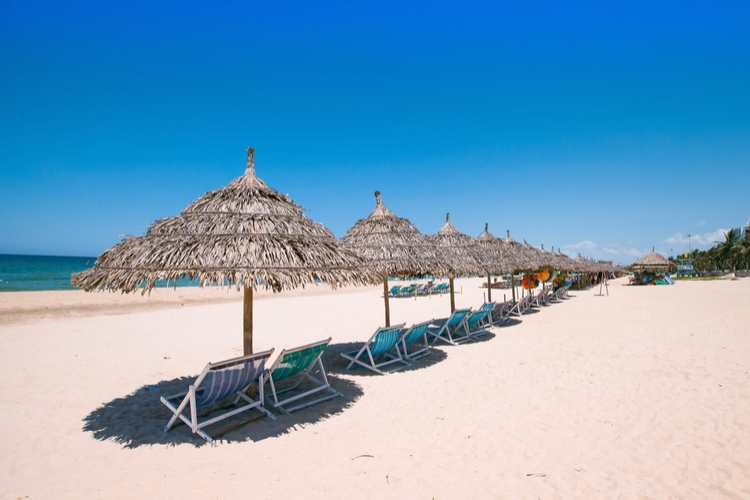 An Bang Beach (Hoi An)

Hoi An has been named as one of the best places to visit in Vietnam, and while the city is mostly famous for its old town and history, the beaches in Hoi An shouldn’t be forgotten because they are beautiful, especially the An Bang Beach. 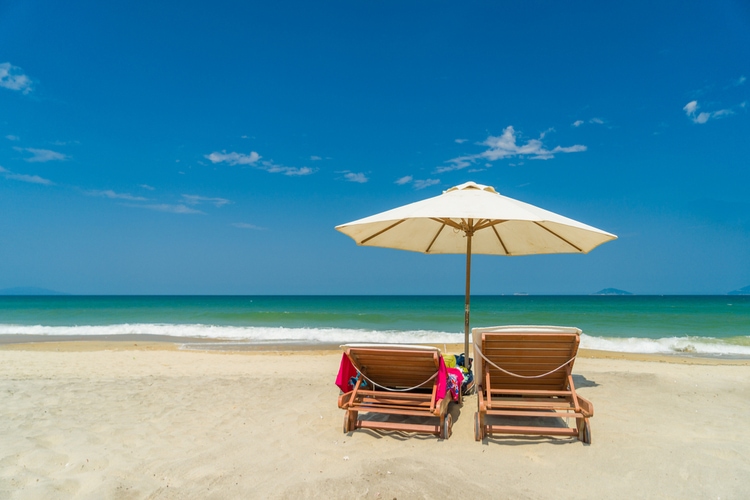 If you’re going to Phu Quoc for vacation or simply travel there for a few days, I highly recommend taking a boat to May Rut Island, which is known for its snorkeling and pristine white sandy beach with crystal clear water. 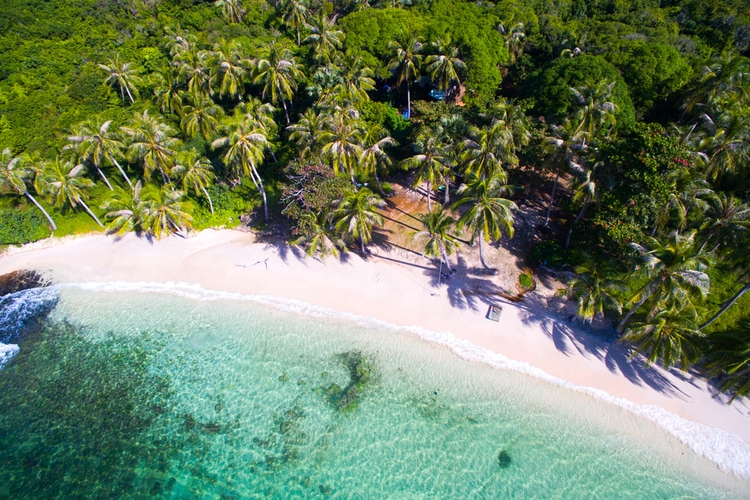 Quy Nhon is relatively unknown, and the beach is situated between Nha Trang and Hoi An. It’s a great place to go for a local experience and at the same time have the opportunity of soaking up some sun.

The main benefit of coming here is the fact that you’re not likely to find many other tourists. There are a few resorts in Quy Nhon, but it’s still considered an off-the-beaten-path destination. 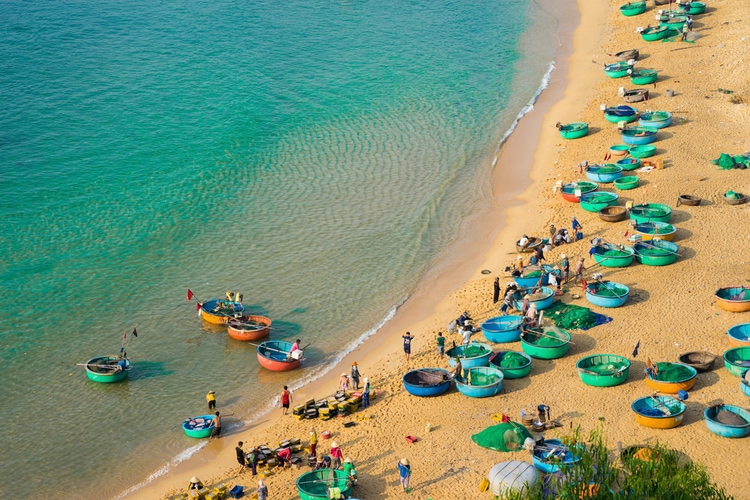 A trip to Vietnam wouldn’t be complete without going on a boat tour in Ha Long Bay. It’s one of the 7 natural wonders of the world, and the beach on Monkey Island is one of its best beaches. 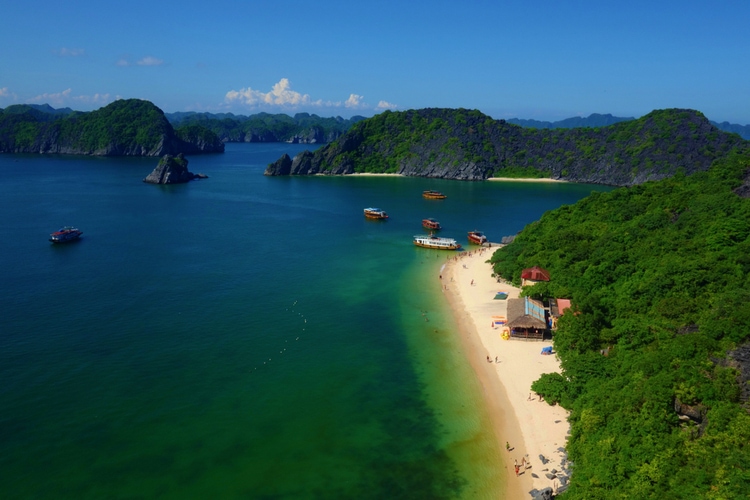 Con Son Island is a wonderful island in the Con Dao archipelago, which is located in the middle of the ocean south of Vietnam. There are daily flights from Ho Chi Minh City but you can also choose to come here by ferry from Vung Tau.

Either way, the Con Son island, and the other islands are home to some of the most beautiful beaches in Vietnam. It’s a true hidden gem that hasn’t yet been discovered by mass-tourism. 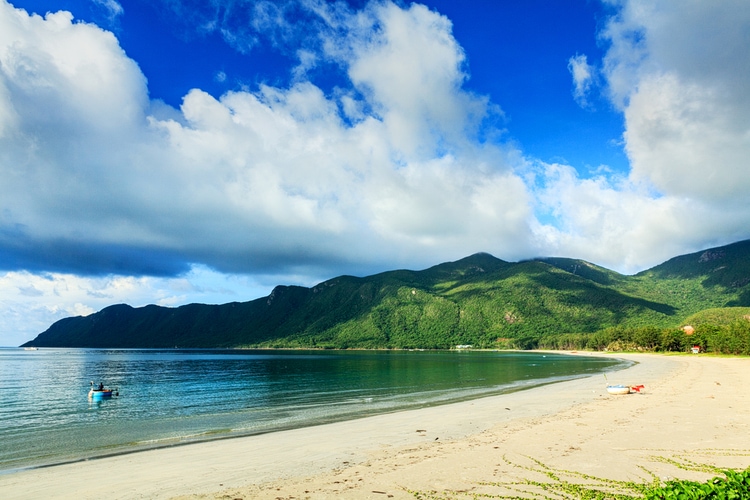 Last but not least, Long Beach, which has become one of the most popular beaches in Vietnam thanks to its long stretch of sand and great location in Phu Quoc.

It’s more or less divided into various sections where some parts are adjoined to resorts and restaurants and others are still undeveloped. The golden sand is soft and nice, and most parts of the beach are clean.

The sunsets at Long Beach in Vietnam are amazing as well, and it’s a popular activity to just sit down and relax while sipping on a coconut or cocktail as the sun sets. 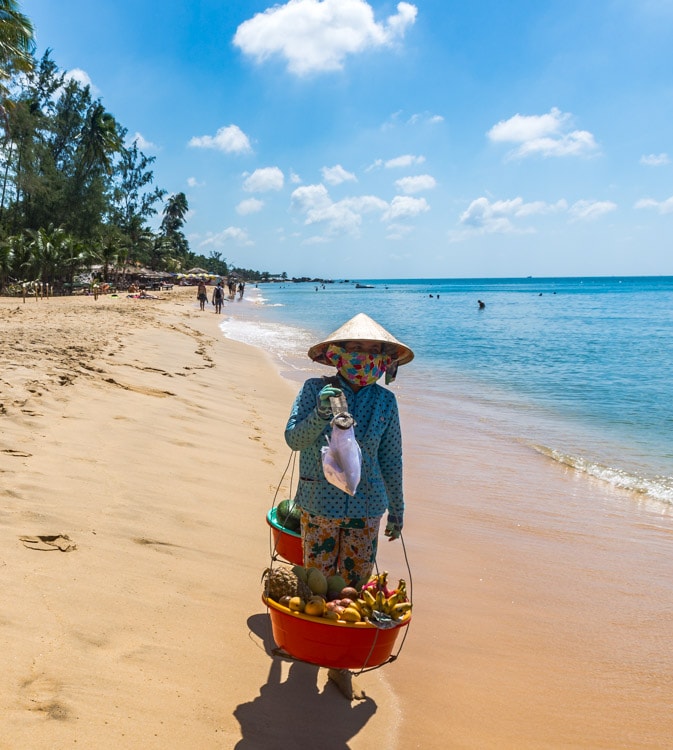 More about the Beaches in Vietnam

The beaches of Vietnam are sandy, either with golden or white sand. The water can vary in color from azure to green or blueish as well as grey/brown if the weather is rough and the sand is driven up.

Many of the Vietnamese beaches are still undeveloped, and you can find a lot of hidden gems scattered around the coast and the islands. With that said, popular resort towns are booming and construction is ongoing in for example Phu Quoc, where tourism has increased rapidly in recent years.

Despite construction and hotels popping up here and there, most beaches in Vietnam remain nice. 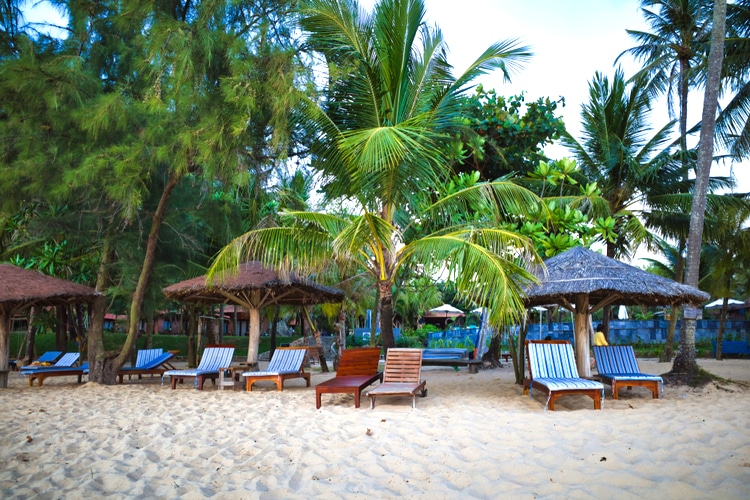 So with that said, it’s not only a bad thing that resorts keep popping up because it also means that the beaches next to them will be kept clean in order for tourists to have a good experience. It also means job opportunities for locals and being able to accommodate more tourists.

Don’t worry though, there are beaches in Vietnam that will suit everyone, no matter if you enjoy lively beaches that have everything you could possibly need on your vacation or secluded beaches where you don’t see a single other person in a day, and everything in-between. 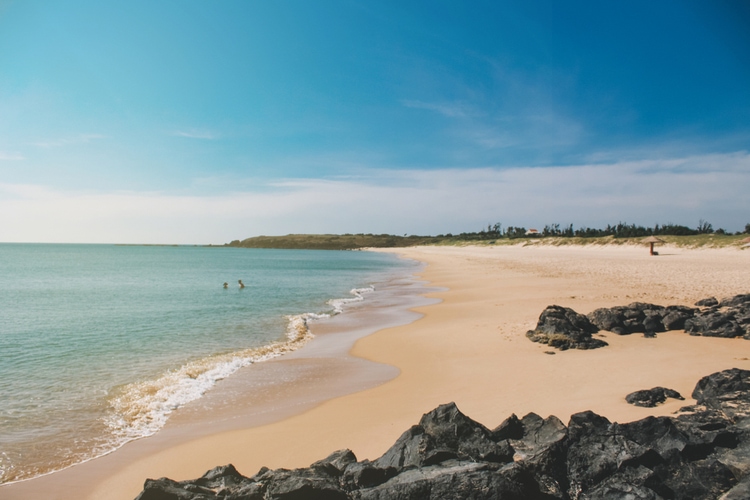 Best time to visit the beaches of Vietnam

In general, the best time to soak up the sun at any of the beaches in Vietnam is during the dry season. The southern part of the country has its dry season from November to April.

However, many of the resorts will still be open during the wet season that spans from May to October, and you’re likely to make bargains on activities and accommodation.

If you’re traveling to the beaches in Vietnam during the wet season, you should expect some rainy days, but there will also be days where it only rains a short while and then the sun comes out. What is the most beautiful beach in Vietnam?

Bai Sao is generally said to be the most beautiful beach in Vietnam. But, in my opinion, there are other beaches in Vietnam that are more beautiful, for example, Hon Tre Island or the White sandy beach in Mui Ne.

Is Ho Chi Minh City near a beach?

Vung Tau is the closest beach to Ho Chi Minh City, about 2 hours away.

Are the beaches in Vietnam clean?

In general, most beaches that have resorts located nearby are cleaned on a daily basis.

Map of the best beaches in Vietnam

Below, you can see the Vietnamese beaches on the map, and as you might notice, most of them are located in the southern part along the coast.

Which of these beaches in Vietnam is your favorite? Leave a comment below! 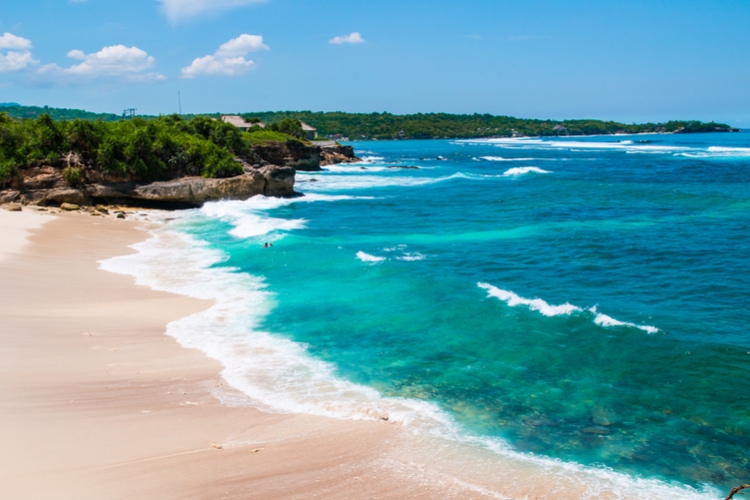 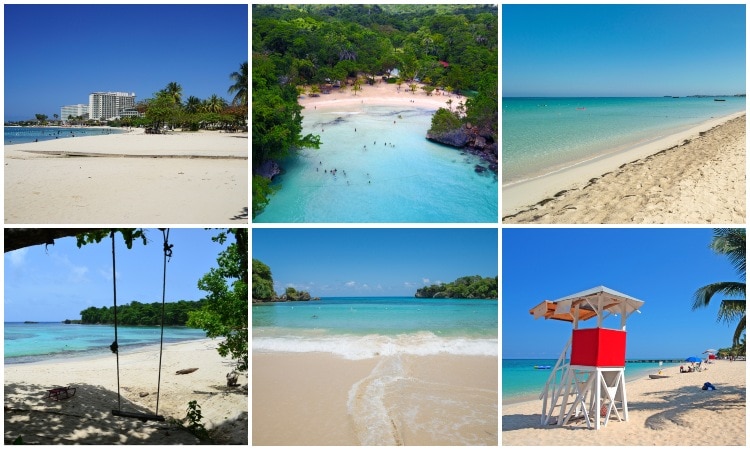