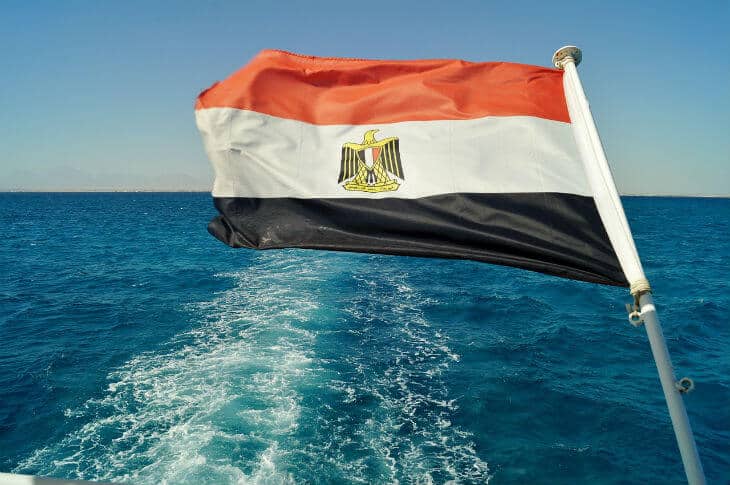 Dreaming about pyramids, paradise beaches, interesting culture and a bustling marine life, then you should travel to Egypt!

In recent years, Egypt has been portrayed as a dangerous place to visit, but in reality, it’s only been a few incidents. But due to heavy media reports, the tourism has declined. That’s a shame because there are so many things to see in Egypt!

Today, I want to tell you about another story, and if you aren’t thinking about visiting Egypt, here are 15 reasons why you should make it your next trip!

Once known as the city of knowledge and crossroad to the world. A historic city that was founded by Alexander the Great himself around 300 years BC. Alexandria was famous for housing one of the world’s largest libraries with over 500 000 ancient books.

Sadly the library was destroyed in an earthquake in the 14th century. But it’s still worth a visit to indulge the Egyptian culture and explore some historic sites. 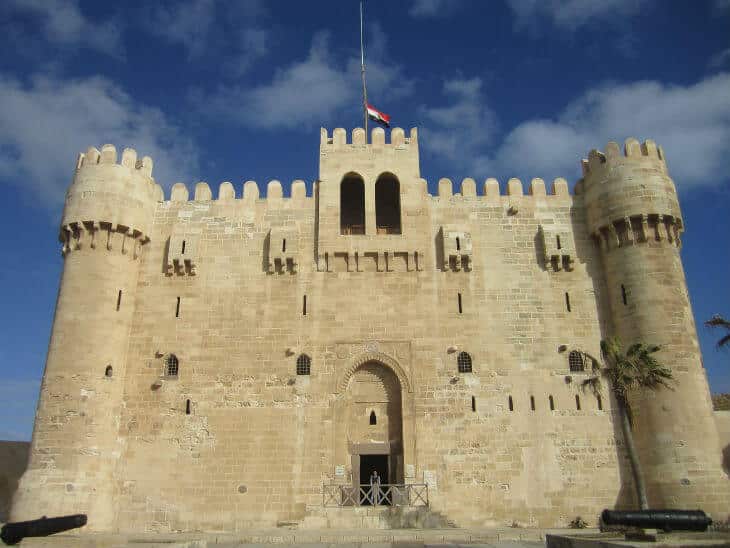 Search for Treasures in the Khan al-Khalili

One of the Middle East’s largest bazaars and a paradise for those who love bargains. If you’re good at negotiating I’m sure you can find plenty of lovely crafts here. Khan al-Khalili is located in Cairo. 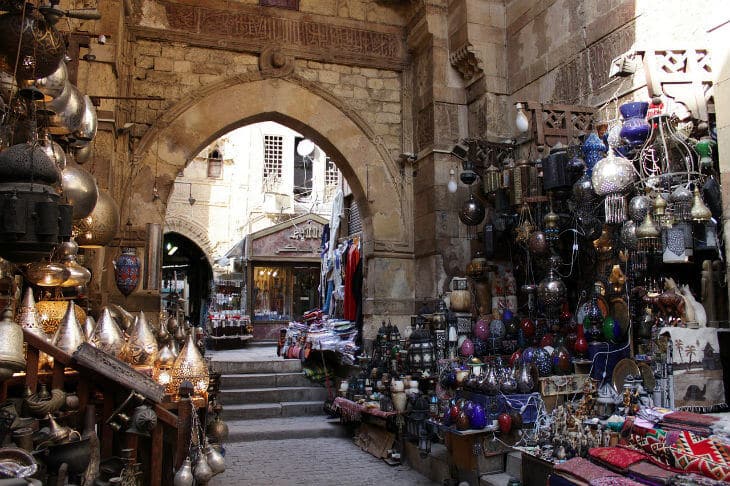 An ancient city mainly populated by ethnic Berbers nowadays. Siwa is famous for the oracle that is located in the temple dedicated to the god Amon. The area has been populated at least since 9000 years BC, which make Siwa a really old settlement and an important historic site. 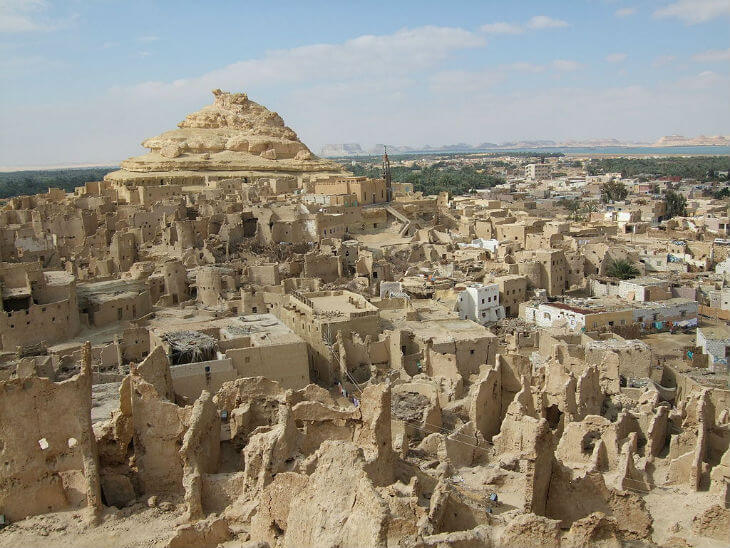 Longing for a nice place to soak up the sun? Then Marsa Alam is a place for you. It’s a smaller resort town than Hurghada and Sharm el Sheik, but it’s really nice. I was there for 2 weeks and enjoyed an all-inclusive resort. The snorkeling and diving here is amazing and you can also go on day trips to old temples and pyramids. 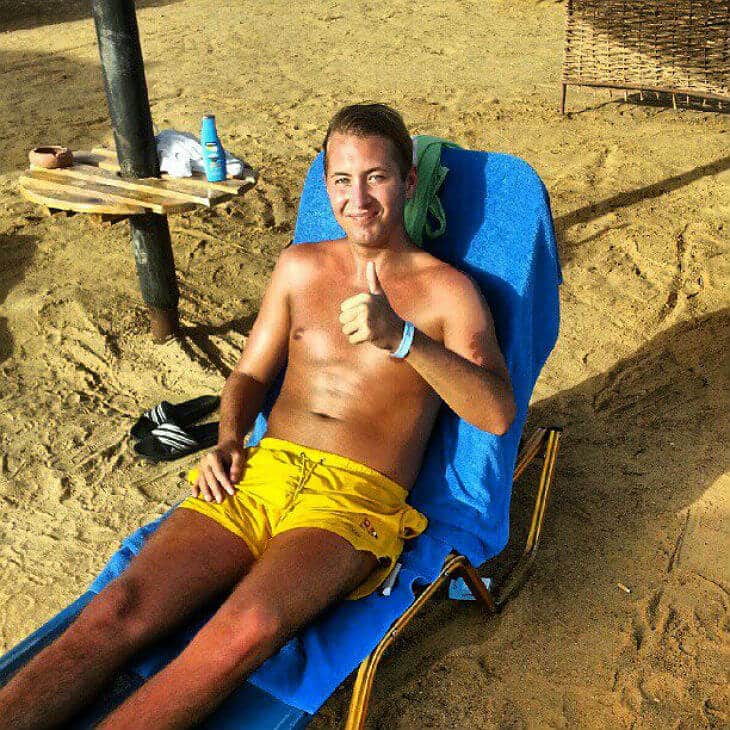 Me at the beach in Marsa Alam

During ancient times, Luxor was known as Thebe and was the political capital of Egypt during a certain time period. As from the New kingdom, approximately from 1550 to 1080 BC it also served as the religious capital.

Luxor is one of Egypt’s most visited places and tourists come here to admire the mighty temple of Karnak and many other temples. Luxor is also known as the world’s largest open-air museum.

Luxor is also home to the famous Valley of the Kings, and to go here is absolutely a must thing to do when you visit Egypt. 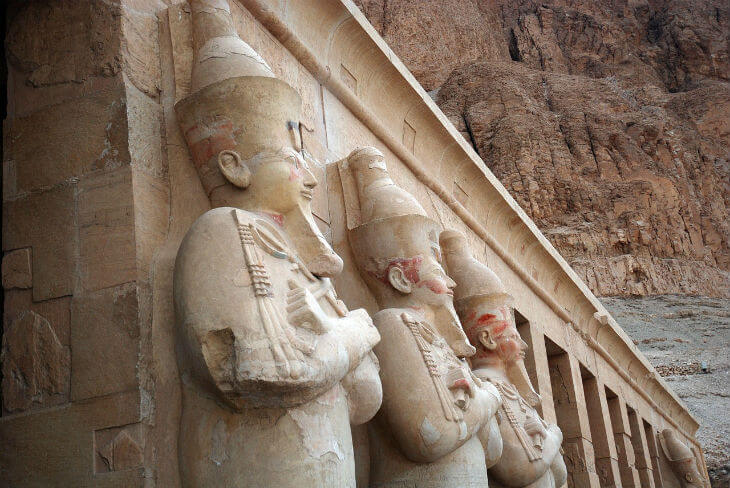 Chat with the locals

Western Media has given Egyptian men a bad rep for a long time now, and sure there are some cultural differences that western people aren’t used to, but you shouldn’t be afraid of speaking with the locals.

So, I’m not a girl but I know a few girls who’ve been traveling in Egypt, and some found Egyptian men to be a little too up-close, but in general most were friendly towards them. And I have the same experience, the locals I met were all very interested in hearing more about my culture and were also eager to tell me more about their culture.

Sure, at the markets people wanted me to buy things and walked after me, but it wasn’t scary, it was just a bit unusual, but that’s one way to do business in Egypt, and it’s also an interesting thing to experience. We travel to experience and see different things than back home, so instead of thinking of it as a bad thing, embrace it and smile.

The old Egyptian hieroglyphs have intrigued me even since I was a little child and saw the old pyramids and pharaohs.  I think it’s really cool to see them in person, and it’s quite interesting how advanced their way of thinking and writing was. 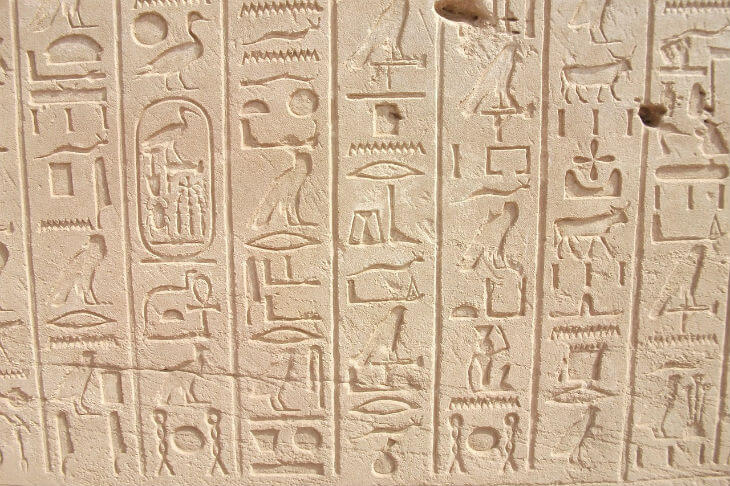 Most of you have probably heard about the mighty Sahara Desert. It’s a cool experience, and you can either walk or go for a 4×4 ride in the desert. Another exciting thing you can try is sandboarding. 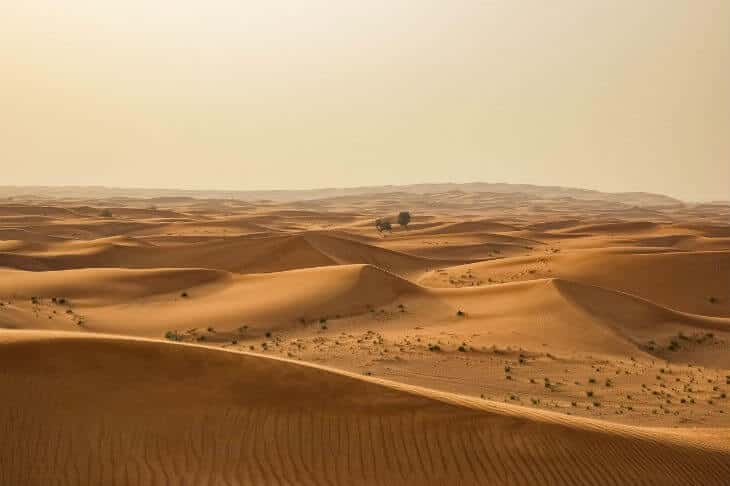 Food is always a good reason to travel, and when you’re in Egypt you shouldn’t miss out on the Egyptian cuisine. You might have tried some of the dishes since many are common in other Arabic countries as well, but there are some dishes that you need to eat while you visit Egypt!

Don’t miss out on these delicious and unique dishes: 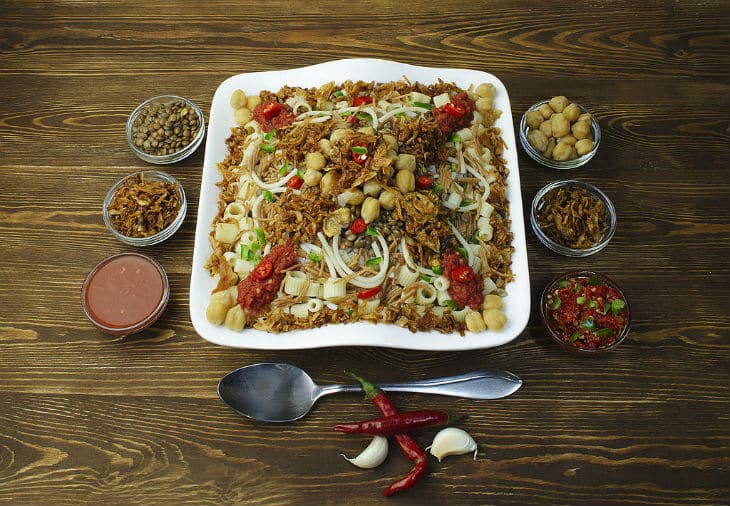 One of the wonders of the world. The mysterious pyramids of Giza are without a doubt Egypt’s best-known tourist attraction and with all rights. Most of you have probably seen some documentaries and such on TV back at home, but to see it in person – Priceless! 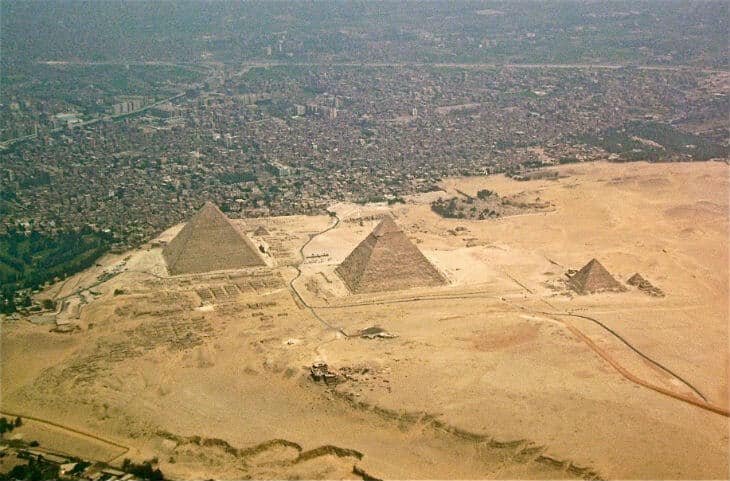 Ancient temples built by Ramses II, to honor the gods Amun, Ra-Horakhty och Ptah, but it’s also raised Ramses himself to a “god” and Abu Simbel is one of the world’s most incredible temples! The Facade is dominated by huge statues that are 20 meters tall.

A place you shouldn’t miss out when you visit Egypt! 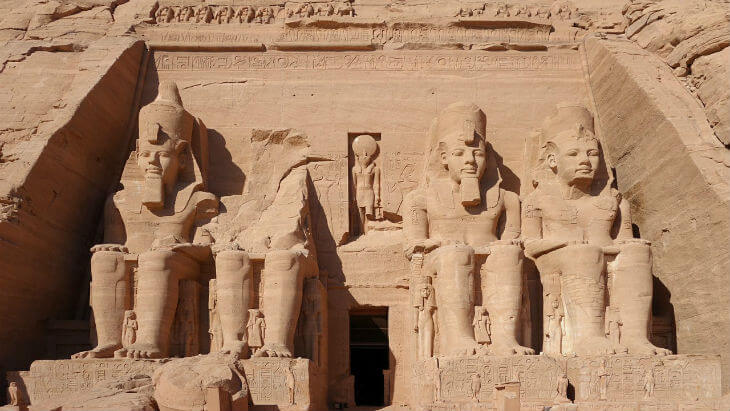 A lovely resort town with both luxurious hotels and more modest ones. The marine life is amazing here, and the beaches are nice too. If you’re looking for a nice vacation Hurghada is a great place, and the prices have never been cheaper. 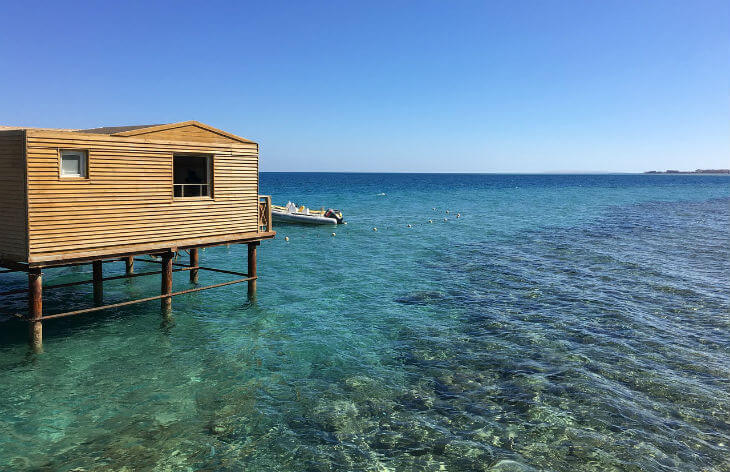 Want to experience the nomadic life for real? Bedouins live in the desert, and travel often. It’s a simple way of living and it’s very interesting to stay with the bedouins and learn more about their culture. 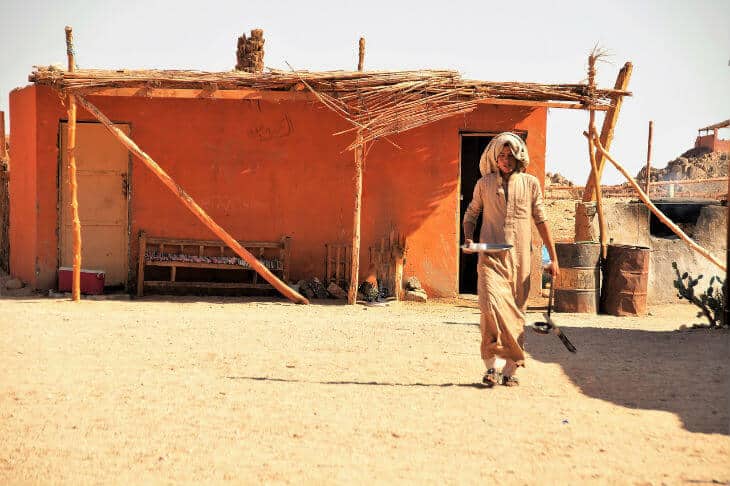 If you like to snorkel and explore life underwater, then Egypt is one of the best places in the world. While I’m not a diver myself, I love animals, but since I’m afraid of water I opted for a submarine tour instead and got to see Sea Turtles, Manatees, colorful fishes and much more.

There are many tours available, but if you’re experienced you can rent equipment and head out on your own or rent a private boat. 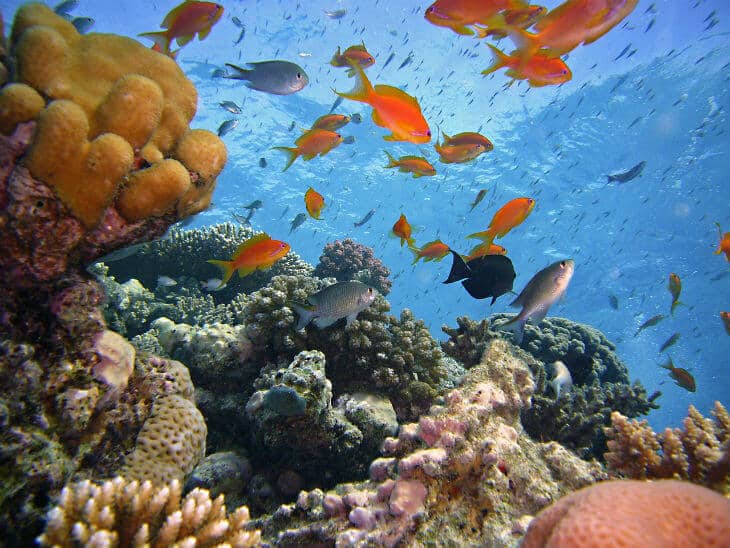 The bustling capital of Egypt is probably the best place to go if you want to experience the culture and meet a variation of locals. It’s also here in Cairo that you can visit the Pyramids of Giza, a mighty experience that shouldn’t be missed out.

In Cairo, you can also visit markets and try different Egyptian cuisine. Another great reason to visit Egypt! 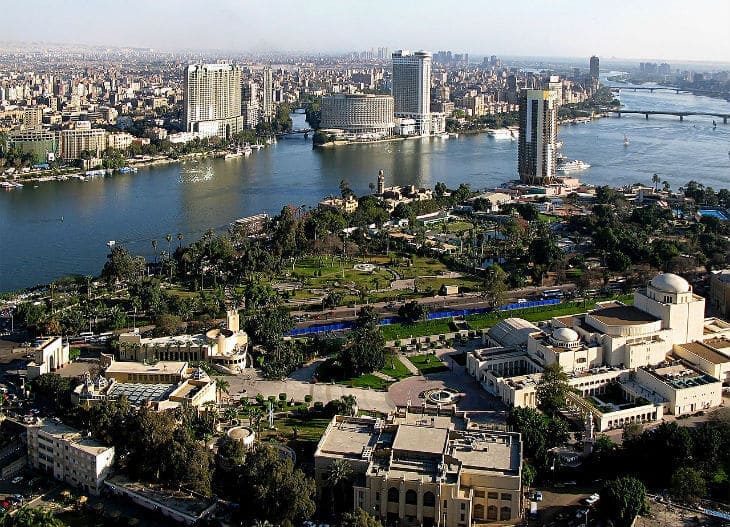 Is Egypt safe to visit?

Well, in short, absolutely. But, of course, you should listen and stay updated with local news. Even though the political situation has calmed down, you should always be wary of the current situation, as in any other country for that matter.

Egypt is safe in general, especially in tourism areas. Most political protests happened in Alexandria or Cairo, and the resort areas hardly noticed anything. When I was in Egypt the political situation was unstable, but I never felt unsafe, and the daily life continued as usual.

The current situation today is way more stable, especially since Abdel Fattah el-Sisi took over as president. Don’t fear Egypt as a destination because it’s highly unlikely that something would happen during your visit.

However, there are some things you should know before you visit Egypt

Flight tickets to Egypt and hotel

If you follow these rules, you will be met with respect and you’ll have a great time exploring Egypt. Personally, I’m eager to go back and explore more.

It’s a huge country and there are so much to see and do! 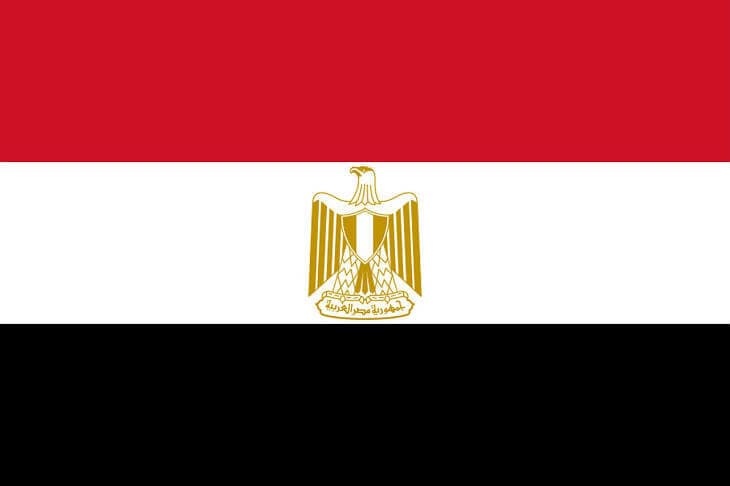 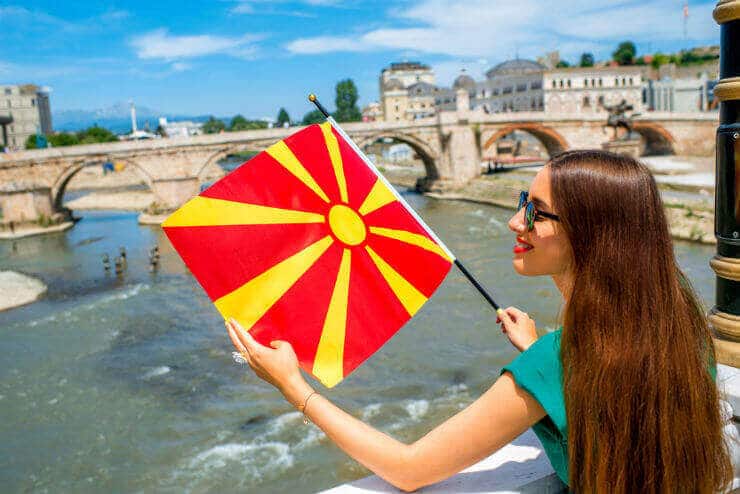 Thanks for the nice write up.I am planning to visit Egypt this month.It was always in my bucket list.I am planning to travel by train from Cairo to Aswan to save some money.Is it safe to do night journey by train ?

Yes! Egypt is beautiful! I went to Alexandria university so I was living in Alexandria for 5 years and just left Egypt for good a few months ago. I’m back to my hometown now but I’m looking forward to go back & visit a few more places I haven’t visited like Sharm el sheikh and mount sinai.

A great article, as well as good and user friendly comments. It's refreshing for people who have already been to put the whole political situation in a clearer perspective . I am now even more determined to go. Thank you all.

Thank you for saying nice things about my beautiful country. Came 8 years ago and never left ? Welcome back to Alexandria anytime! Safe trip to new destinations. Best regards Katrine from Norway ??

Thanks Katrine :) Egypt is beautiful and doesn't deserve all the negative publicity it has been given in recent years! I'm looking forward to go back, and I hope I will have a private Norwegian guide to the best spots in Alexandria when I go back to Egypt! :)

Very well written! Been living in Egypt for 8 years now. Take care on your trips! Looking forward to follow you :) Katrine. (Norwegian) ?